Looking for a solid road trip through the Sierras? Look no further… 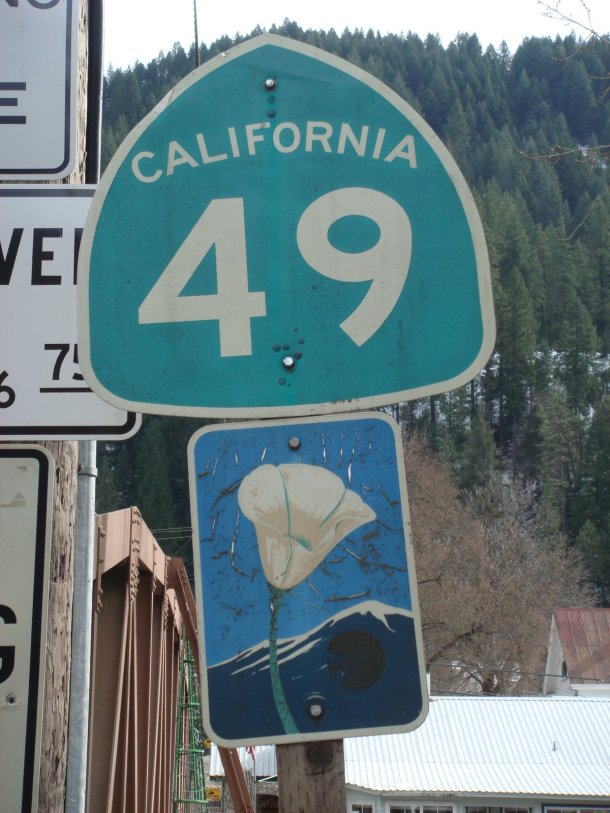 This 317-mile long state highway, dubbed the “Golden Chain” Highway, meanders through nine counties in the heart of the California Gold Country. Oakhurst anchors its south end while Vinton and Loyalton are found to the north.

The miles along Highway 49 described on this page are the most scenic and historically rich sections of the highway (in my opinion). The route takes you through small towns, historic mining areas and along one of the most beautiful rivers of Northern California.

We headed out from Oregon House and picked up Highway 49 in Camptonville (However if you start from Nevada City you will lose nothing as you will drive through great scenery and pass through North San Juan).

Camptonville was originally a mere stop on the road to Downieville. However, in 1852 a gold strike was made here, and by 1857 large scale gravel mining was going on.

In 1879, Lester Pelton, a carpenter and Camptonville resident, invented a split bucket water wheel to power a sewing machine. This simple device proved to have over twice the efficiency of a flat paddle water wheel, and over 20 % greater efficiency than a single bucket wheel. The ‘Pelton Wheel’ was patented in 1880 and was an instant success. It powered stamp mills, pumps, printing presses, fans, sugar mills and many other machines all over the world. Along with reservoirs and ditches, it was a major component in the development of hydroelectricity. The Pelton wheel is still in use today and provides power at many locations including nearby Bullards Bar Dam.

Shortly after passing through Camptonville you will find yourself driving along the river: 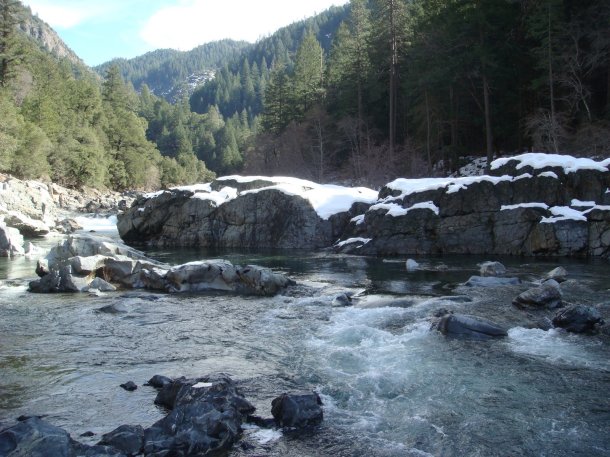 Rocks scoured by the force of the water: 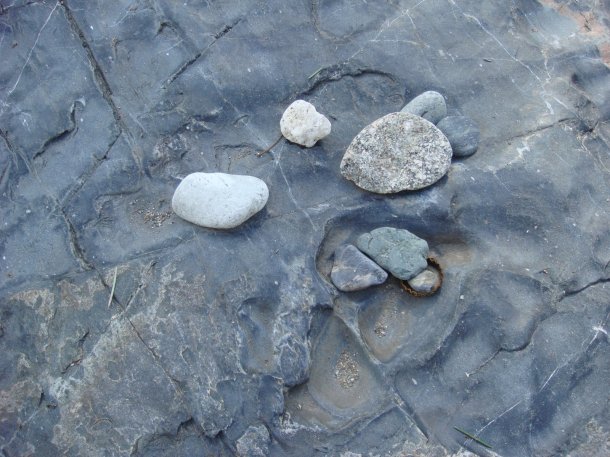 The waters of the North Fork of the Yuba River are incredibly clean and clear: 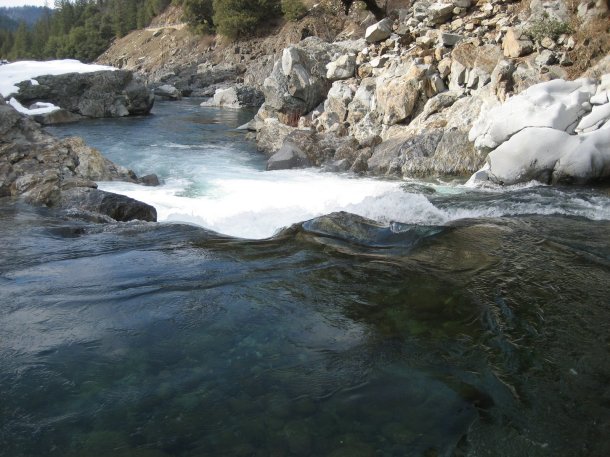 Me doing what I do at one of our stops along the river:

Here are some video clips of the river:

The North Yuba River flows for forty-five miles through the northern Sierra Nevada, from its headwaters at Yuba Pass to New Bullards Bar Reservoir.

Highway 49 offers many scenic vistas, including breathtaking (and I very rarely use that word) views of the river’s numerous rapids and cascades, the canyon’s heavily forested slopes, and the impressive granite spires of the nearby Sierra Buttes.

The North Yuba is a formidable class IV-V whitewater river, offering a challenging experience for expert kayakers and rafters during the spring run-off. For the rest of the year, the river is probably better known for its diverse fishery. Fisherpeople come from all over California to fish for trout in the North Yuba.

Amanda by the river:

Wet dream for a kayaker? 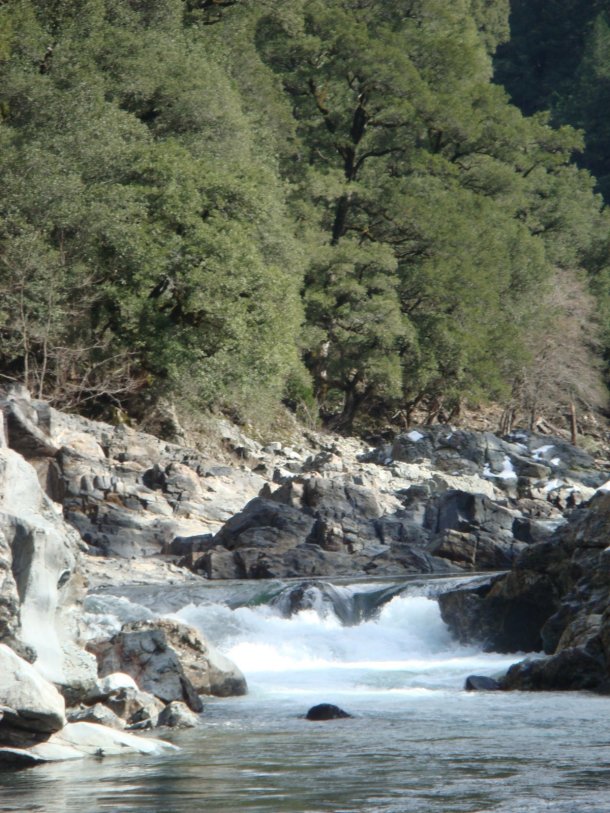 More views of the river… These were all taken at different locations where we stopped:

More pictures from one of our stops along the river… These are chronological and, therefore, all of these shots are farther and farther up the river: 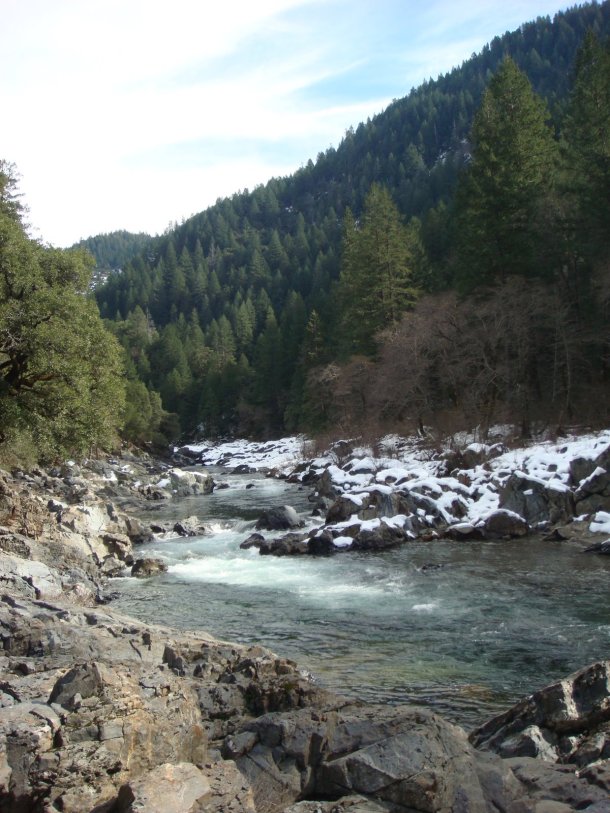 Sun on the snow and rapids: 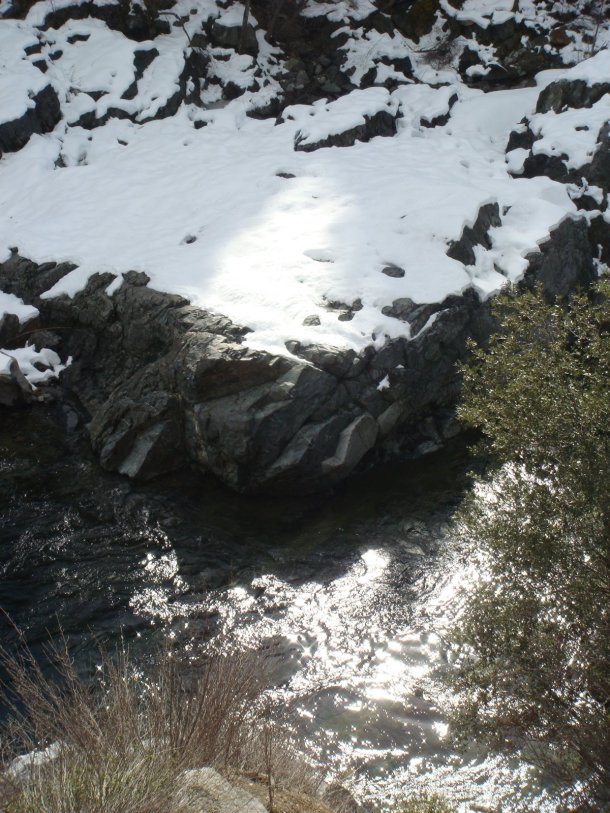 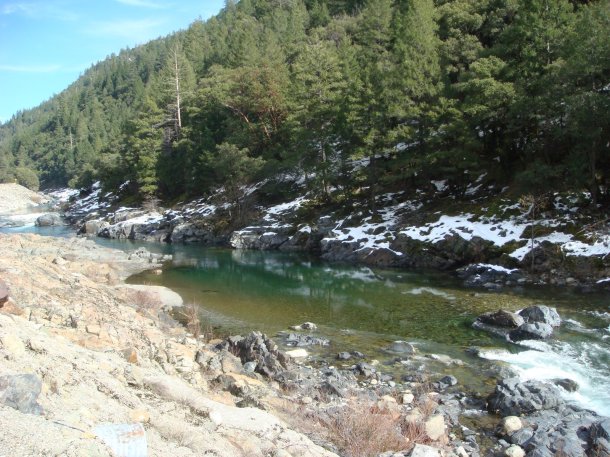 Before long you’ll come to the town of Downieville…

Founded in 1849 as a gold mining town and named for Major Wm. Downie, leader of the first gold discovery party in Sierra County… In 1850, 5,000 men wintered in Downieville. In the following spring, that population scattered into the surrounding hills and canyons in search of gold. Nevertheless, the miners remained dependent on Downieville for provisions and mail. Coming to town also offered a social dimension to the endless work in the mines. The town offered restaurants, soft beds, gambling, culture and companionship. Perhaps the most important aspect of a town visit was the chance to share ideas and techniques about mining. By May of 1850 Downeiville had 15 hotels and gambling houses, 4 bakeries and 4 butcher shops. By the mid 1850’s Downieville was California’s 5th largest town.

Downieville is considered the least changed town in all the Gold Rush towns in California. Walk along the narrow streets and wooden sidewalks and you can come across some great shops and restaurants. And, of course, there are historical landmarks everywhere… 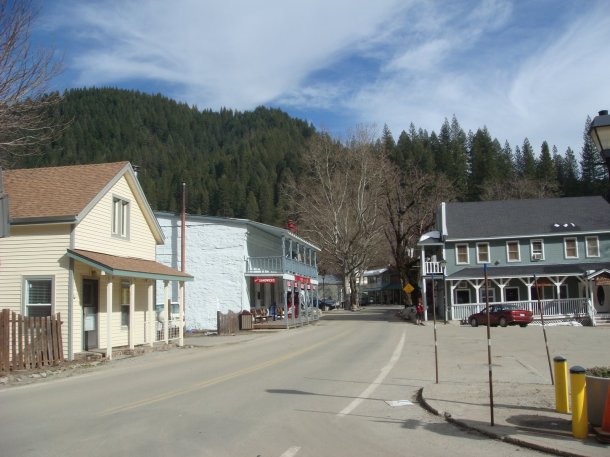 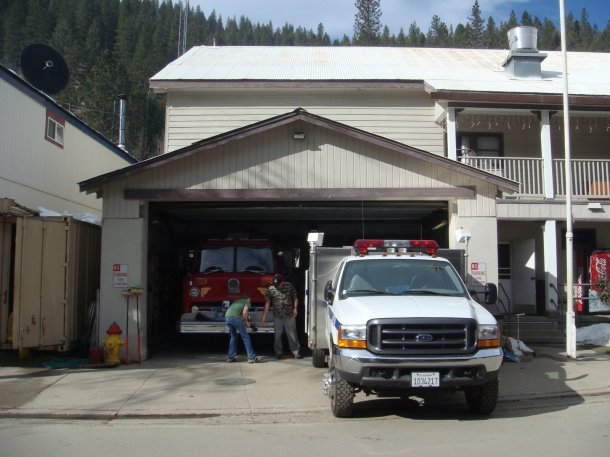 A view of Downieville up the river:

One of many historic Downieville buildings:

Snowmobile drive thru at a hotel along the river: 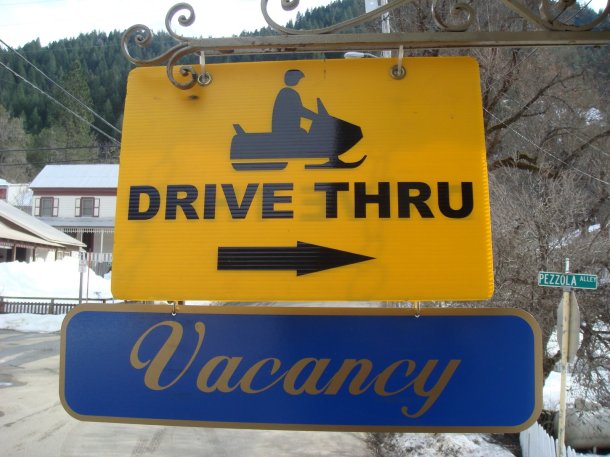 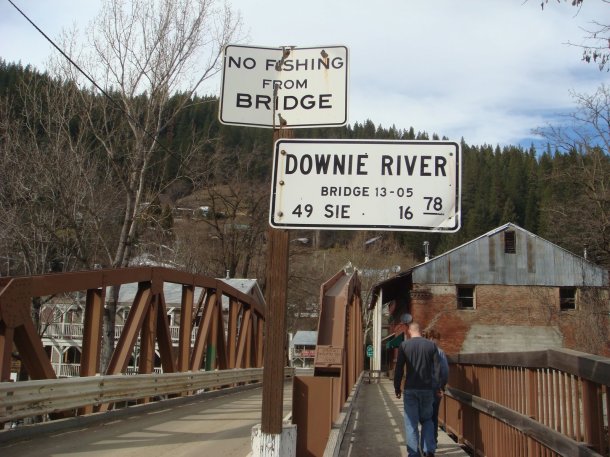 I’m on Juanita’s side on this one: 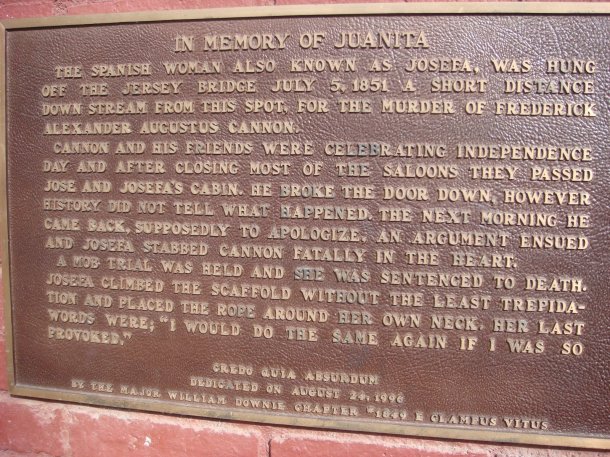 Getting familiar with the local girls:

Continuing along farther up the river:

Established as a mining town in 1850, by 1852 Sierra City had 2 large buildings, a bakery shop and several gambling houses and saloons. Miners were busy retrieving gold from several tunnels in the nearby Sierra Buttes. In the winter of 1853 many buildings were crushed by an avalanche of snow, forcing the inhabitants to rebuild at the present lower elevation. Today, there are several hotels, a great restaurant with a trout pond, a remarkable garden and even an impressive mining museum (Kentucky Mine Museum)…

Another view of Sierra City:

The Sierra Buttes which tower over Sierra City… There is a great hike one can take to a fire lookout tower on top of one of the Buttes: 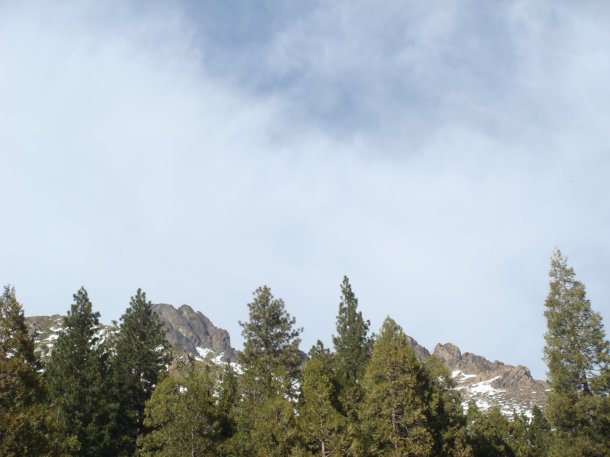 There’s a lot of snow in Sierra City at this time of year: 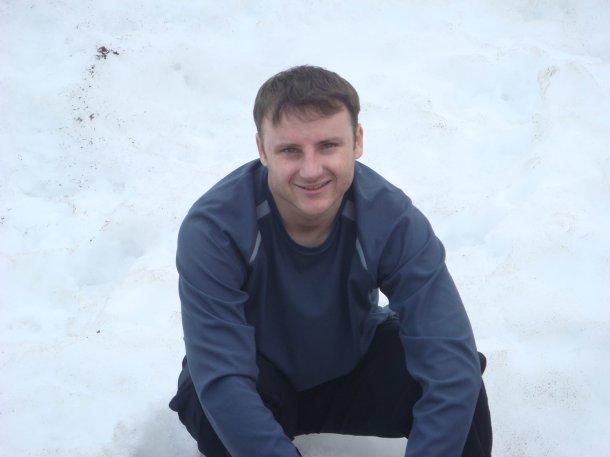 Continuing on past Sierra City, you will come to the 6,701-foot summit of Yuba Pass before starting to drop down into the eastern Sierras…

Just past the Yuba Pass is this vista point overlooking the Sierra Valley:

As with every other stop we made on this trip, there were friendly people there to talk to: 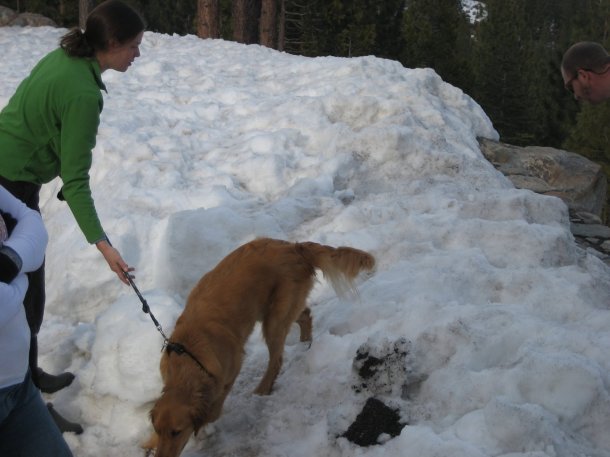 The Sierra Valley is a large mountain valley at approximately 4,850 feet (1,480 m) elevation, Sierra Valley is surrounded by mountains ranging in elevation from 6 to 8,000 feet (2,400 m). The huge valley, 120,000 acres (490 km²), is a down-faulted basin, formerly a lake bed of similar geologic origin to Lake Tahoe to the south, now filled with sediment up to two thousand feet thick. Average annual rainfall is less than twenty inches, most falling as snow. The valley floor has a grassland and sagebrush ecosystem and is the site of extensive freshwater marshes filled with cattails, Bulrushes and alkaline flats that drain into the middle fork of the Feather River. Many species of wildlife make their permanent home in the valley, and a great number of migratory bird species stop over in the fall and nest in Sierra Valley in the spring. The Valley also has thermal activity. Marble Hot Springs is located in the north central valley floor. 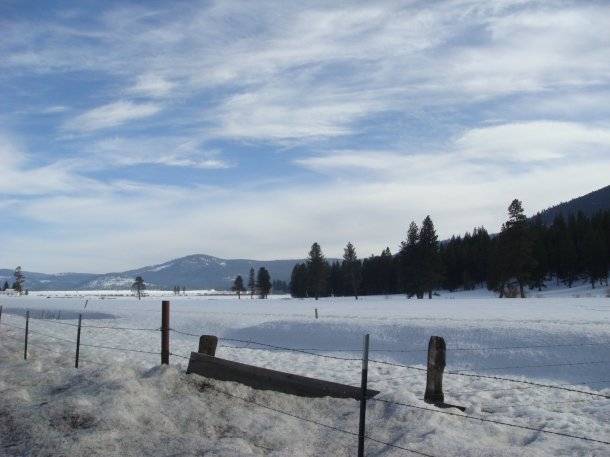 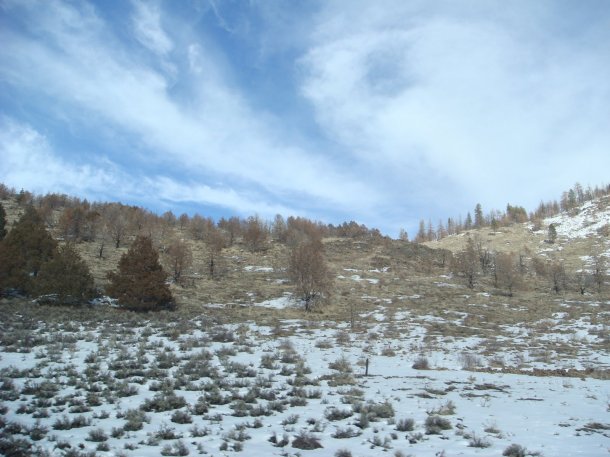 Typical road scene in the Sierra Valley… Makes it hard to stay below 90 mph:

Moon over a mountaintop on the edge of the Valley: 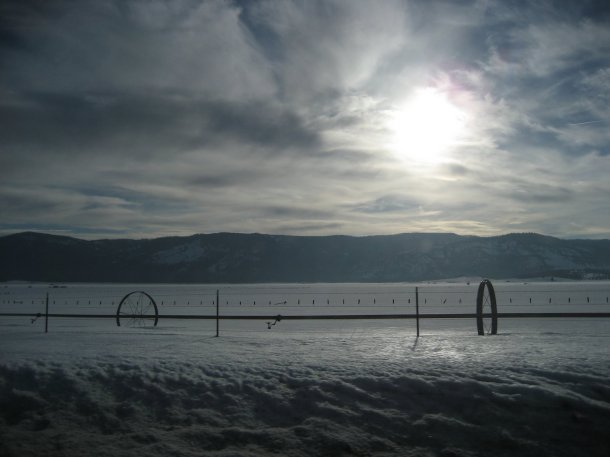 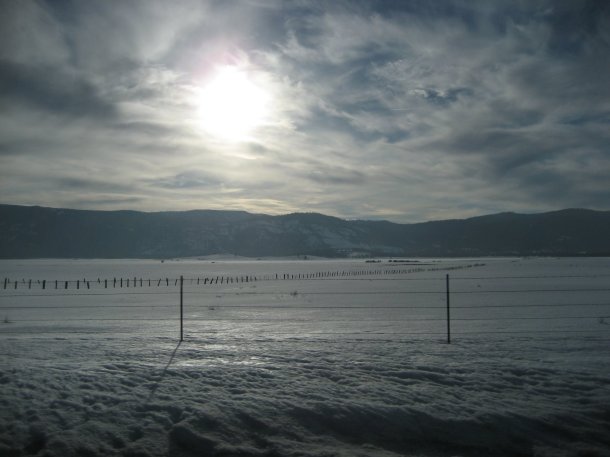 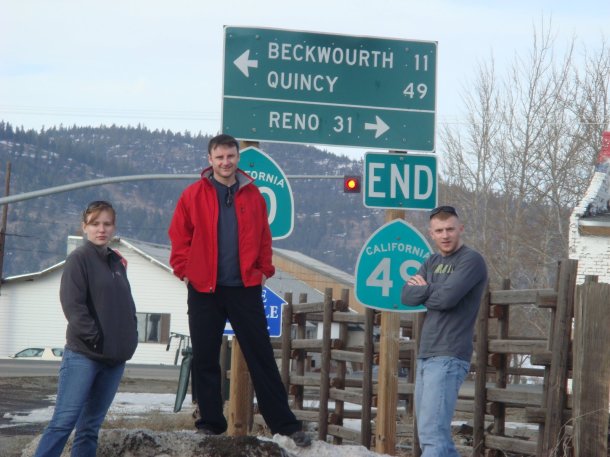 If you don’t like to backtrack (and we don’t), you can take 89 over to Interstate 80. Have dinner in Truckee and you’ll round out a solid day of road-tripping perfectly…