If you want a real “Wild West” environment in Ethiopia, I would suggest heading to Jijiga.

In the interest of providing balance, the British Home Office emphatically does not suggest visiting Jijiga.

We advise against all travel to Jijiga town, due to the risk of being caught up in a bomb attack following a number of incidents in the last 24 months, and recommend against overnight stays unless in secure accommodation. Recent incidents include (but are not limited to):

On 28 May 2007, there was an explosion in the Jijiga stadium. At least five people were killed and 52 wounded in the blast.

On 5 August 2007 there were two bomb explosions in the town of Jigga – one near the Protestant church the other in a market area – which reportedly killed one and injured around a dozen.

On 28 September 2008 Ethiopian police reported that there had been an explosion in the “Musna Sefer” area of Jijiga, the capital of the Somali Region. This took place at a taxi terminal near the Andinet Hotel. Four people were killed and eight injured.

It also happens to be right on the border with Somalia – which is why we were there.

Arriving at the crude airstrip that forms the Jijiga Airport, the only other aircraft at the airport was a stripped UN plane:

Walking to the, ummm, airport terminal… The “baggage claim” ended up being a patch of bare dirt where our luggage was unceremoniously dumped. That’s our airplane in the background and the UN plane in the foreground:

We found a shared taxi to take us into town where we were able to catch an extremely overcrowded and battered minibus to the Somalia border.

My criteria for being in the middle of nowhere was established in Afghanistan when I decided that if I saw wild camels, then I was really in the shit.

Returning from Somalia several days later, I was able to get a better sense of the countryside around Jijiga as I was able to open my cracked, mud-smeared window on this particular overcrowded and battered minibus.

This really is a very empty part of the world. I wish there were more like them:

Once you get close to Jijiga, you can see the occasional field scratched out for crops: 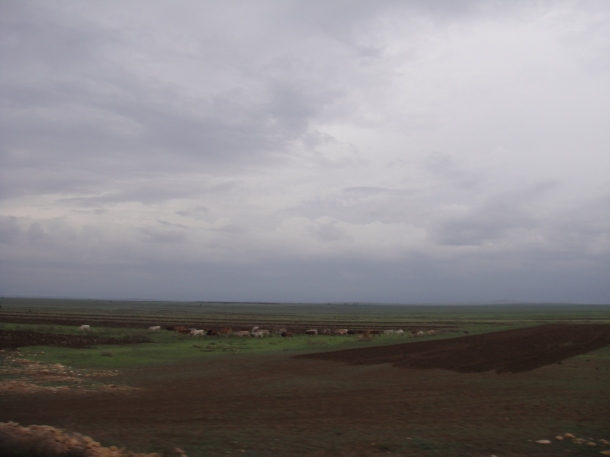 But even close to Jijiga those fields are few and far between, with vast stretches of this:

The road is, of course, deserted:

It is only when one is almost in Jijiga that the outskirts of Jijiga begin – with huts like this:

How awesome is this scene? These guys live in primitive huts made out of garbage, but roll around in this bulldozer! I’ll bet they get tons of girls. Kind of like when I was living at home with my parents, but had a racing motorcycle… Not quite as cool as a guy with a bulldozer though. That’s some serious advanced game:

Livestock, a main staple of the Jijiga economy, roams freely through town, through fields – across roads: 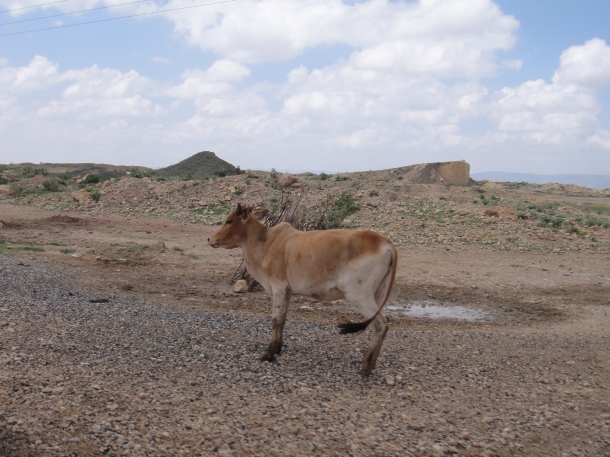 The suburbs of Jijiga:

Downtown Jijiga… The atmosphere in this seldom-visited capital of the Somali region is noticeably different than the rest of Ethiopia. Signs are written in Somali, women are veiled and Arab-style mosques dot the skyline. Business at the central camel and livestock market is brisk – as is the business of selling contraband smuggled in from Somalia. If your food tastes extend beyond onions or boiled meat, you may be a little disappointed in Jijiga’s restaurant scene. Same goes with Jijiga’s hotels if you have a thing about having electricity:

The next morning my Italian and I took a rickshaw to the airport.

Our flight arriving to take us to Dire Dawa and then on to Addis Ababa: