Finally meeting up with my fixer at the Islamabad airport, we were soon on our way to Peshawar. Driving out of Islamabad, we passed through a prime example of the sprawl cities in the developing world are experiencing as they continue to grow at tremendous rates.

The area pictured below was forested a few weeks before this picture was taken. And now, as you are reading this, it is probably completely covered in homes. You can see homes already under construction on the horizon:

Outside of Islamabad, we stopped at a brand new museum that isn’t listed in any guide books yet – the Golra Railway Museum. As with all of the museums I visited, we were the only guests.

To the very great credit of the museum, goats were given free reign on the grounds. This boy was keeping an eye on the two baby goats near the tracks: 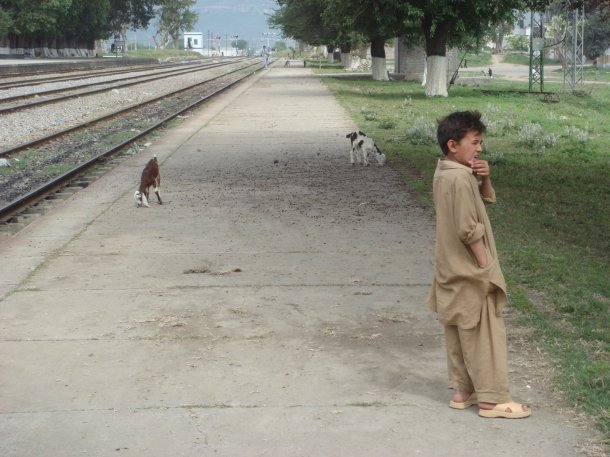 We were told that the station itself was opened in 1872 to connect Peshawar, Kohat and Havalian. And another person told us it was opened in 1882. But, whether it was 1872 or 1882, in the broader scheme of things does not matter much…

The station now houses a part of the museum (the rest of the museum being the trains outside). Inside the small station museum, which still retains its Victorian style quite well, is an interesting array of weapons and ammunition, watches, navigation equipment, surgical items used by railway hospitals, kerosene lanterns, crockery, historic photographs, antique furniture, railroad time tables, model trains – standard railroad museum fare.

Among the photographs hanging on the walls are pictures of Afghan King Amir Abdur Rahman at the Rawalpindi Railway Station in 1886.  Others show the passing of a steam train through the Khyber Pass in the late nineteenth century (that would have been an awesome trip).

One was a measuring instrument from the Khum Karen Railway Station of India, which was brought back as a trophy of war by soldiers of the Pakistani Army, who had captured the station from Indian forces during the 1965 war.

Another interesting trinket was a key used to lock the doors of passenger coaches carrying refugees to Pakistan during its violent separation from India in order to help protect against forcible opening of the doors by extremists while journeying through Indian stations.

An old steam train on the grounds of the Golra Museum… An interesting fact about the steam engines at the museum is that they were still in regular use up until as recently as 1990 and are all still in running condition:

I was rather impressed by this banyan tree on the grounds of the museum:

One of the old boys hanging around the museum:

Following our visit to the museum, we stopped at a roadside tea shop. These lovely statuettes were on sale next door… All of you are lucky that these were so large, or this would have been everyone’s Christmas present this year: