Described by Cicero as “the greatest Greek city and the most beautiful of them all”, Siracusa still possesses quite a bit of charm: 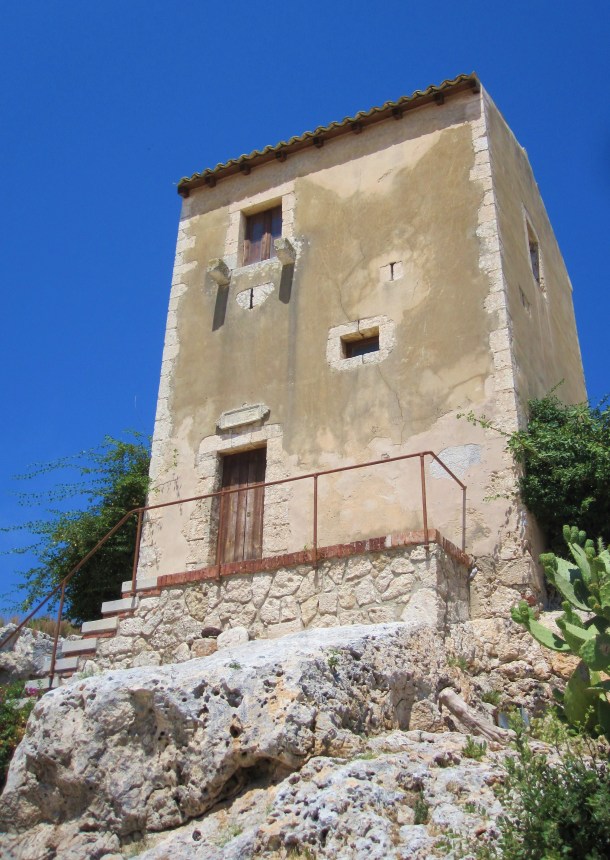 Located on the southeastern corner of Sicily, the 2,700-year-old city was once one of the major powers of the Mediterranean world.

Siracusa was founded in 734 or 733 BC by Greek settlers from Corinth and Tenea, who called it “Sirako”, referring to a nearby salt marsh.

The city-state prospered and became quite powerful, even making expeditions up to Elba and Corsica on the Tyrrhenian Sea. However, Siracusa’s expanded power inevitably brought it into conflict with its neighbors.

Sometimes allied with Agrigento and another time with the Spartans, Siracusa battled the Carthagians, the Etruscans, the Siculi and even Athens when the Athenians sought more resources with which to pursue the Peloponnesian War. However, the most persistent foe of Siracusa during this period of ancient history was Carthage.

Siracusa had been alternating between tyrants and democracy, but lost its independence when the city-state fell to the Romans in 212 BC. During the Roman assault, Siracusa’s most famous son – the mathematician, astronomer, physicist, engineer and inventor Archimedes – was killed by a Roman soldier.

The Romans held Siracusa until the Vandals seized it. Then, the Byzantines took Siracusa from the Vandals in 535 AD.

The Muslim conquest of Sicily swept through Siracusa in the form of the Aghlabids who laid siege to the city and captured it in 878.

In 1085 the Normans occupied Siracusa. The Normans were followed in their conquest by King of Germany and Sicily and Holy Roman Emperor Henry VI of Swabia (Germany) in 1194 before the Genoese briefly ruled Siracusa from 1205 to 1220. Genoese rule was ended when King of Sicily, Italy, Burgundy and Jerusalem and Holy Roman Emperor Frederick II took the city-state back for the Germans.

After this, Palermo gradually eclipsed Siracusa in importance, as the capital of the Kingdom of Sicily. Eventually the kingdom was united with the Kingdom of Naples to form the Two Sicilies until the Italian unification, led by Giuseppe Garibaldi, in 1860.

And on and on the warfare and fighting goes, even as recently as World War II when Siracusa was badly damaged by heavy Allied and German bombing campaigns in 1943… General Montgomery’s Eighth Army captured Siracusa almost unopposed on the first day of the allied invasion of Sicily, Operation Husky. The port at Siracusa was then used as a base for the Royal Navy. To the west of the city is a Commonwealth War Graves cemetery where about 1,000 men are buried.

The point of the above was to illustrate that at one time or another, essentially every major civilization (and plenty of minor civilizations) has occupied Siracusa at some point…

A view of Siracusa across its port as it looks today: 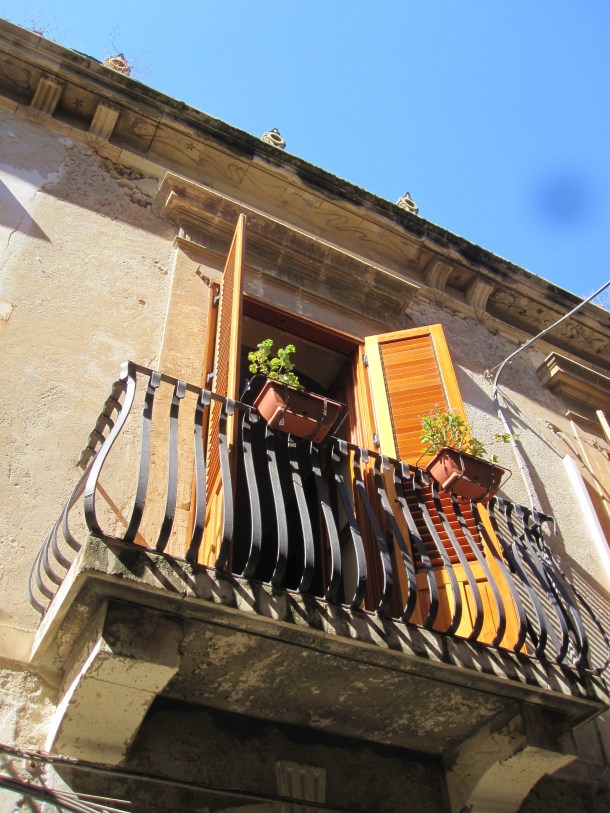 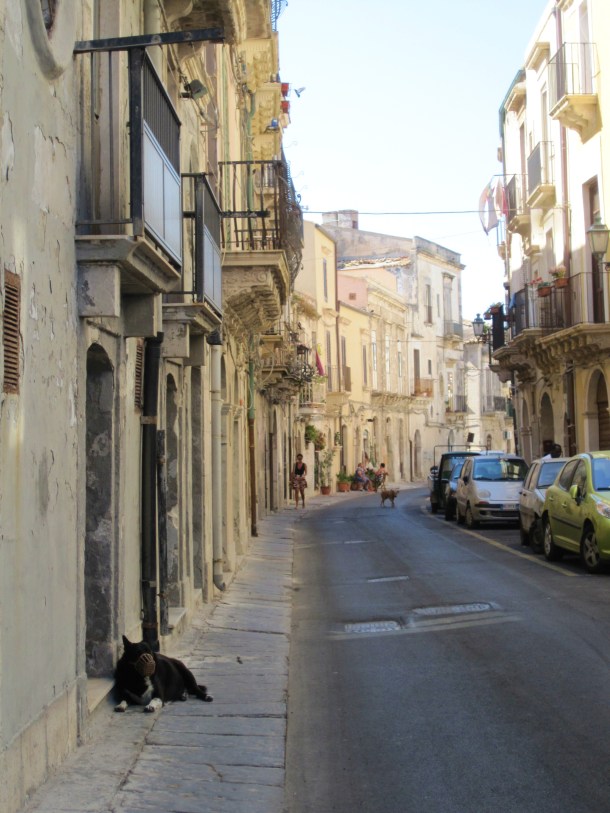 Along the waterfront of Siracusa:

These guys are sorting mussels that they picked up by wading through the tide pools around Siracusa:

Naturally, Siracusa has a number of archaeologically significant sites surrounding it and these, along with the city of Siracusa itself, are listed by UNESCO as a World Heritage Site.

This contented cat at the entrance to the archaeological zone set our visit off properly:

Below is the immense Altar of Hieron II, a ruler of Siracusa who came to power in 275 BC… The altar was used for mass sacrifices during festivals: 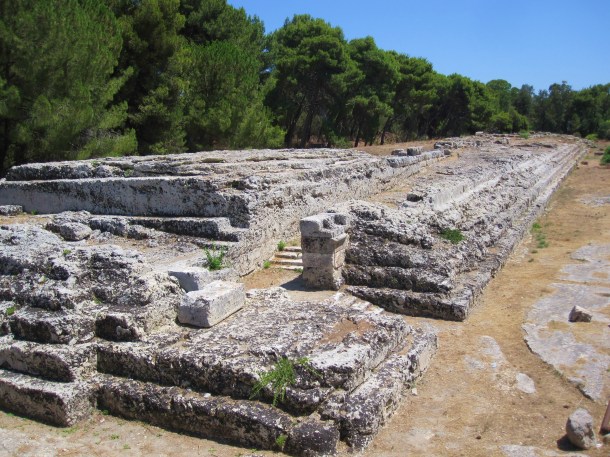 This Greek theater is one of the largest ever built by the ancient Greeks. It is still used today for special events:

Near the theater are abandoned stone quarries which were also used as prisons in ancient times. The most famous feature in these quarries is a cave known as the Ear of Dionysius…

This name was given to the cave by the painter Caravaggio and refers to a tyrant, Dionysius I, who seized power in Siracusa in 405 BC.

According to legend (perhaps created by Caravaggio), Dionysius carved the cave in its shape in order to amplify the screams of prisoners being tortured within.

Regardless of its purpose, the acoustics are quite remarkable as a hushed conversation held near the back of the cave can be heard quite distinctly at the entrance to the cave: 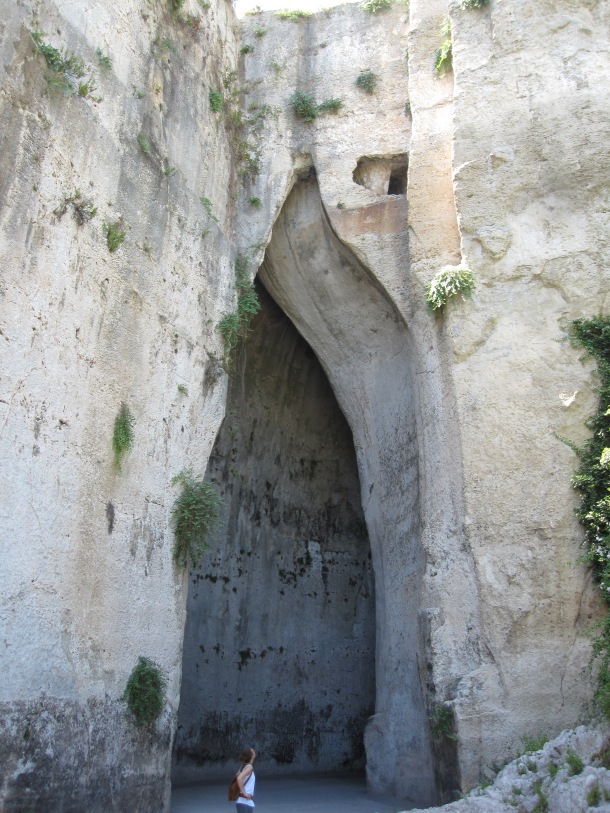