The process of raising bees and selling honey in Yemen is a little different (but most things are a little different in Yemen). Unlike everywhere else I am familiar with, where the bees are taken to the flowers, in Yemen, the flowers are taken to the bees. And the bees will be located next to a busy road where it will be the most convenient to sell the honey they produce.

The way it works is that one will be driving along and will come around a corner to see a guy standing by the road with his hand high in the air, waving a plastic jug or bottled water container filled with an amber liquid. The amber liquid is, of course, honey and if you are interested in acquiring some honey, you simply pull over and negotiate a price (the purchase of most everything is negotiated in Yemen).

Below is one such operation – The man in the picture is one of the beekeepers and arrayed off to the right are their beehives. Do you see that black plastic bucket on the ground in front of the beehives? This is full of flowers that one or both of the men found up in the mountains and brought back to the bees. So, the bucket was absolutely swarming with bees when we visited:

A better view of the beehives… Unlike in the West, you’ll notice that the hives are much smaller in Yemen. I didn’t think to ask about the reason for this at the time, but I can speculate that it makes transporting the bees easier (I observed bees being transported on the backs of motorcycles on more than one occasion):

This particular team (two men) had been at this site for 55 days when we visited them. The primitive stone structure (in the picture below) on the left is where they are staying for now until they will move on elsewhere. The beekeeper is fanning smoke into a hive in order to collect some fresh honey for us: 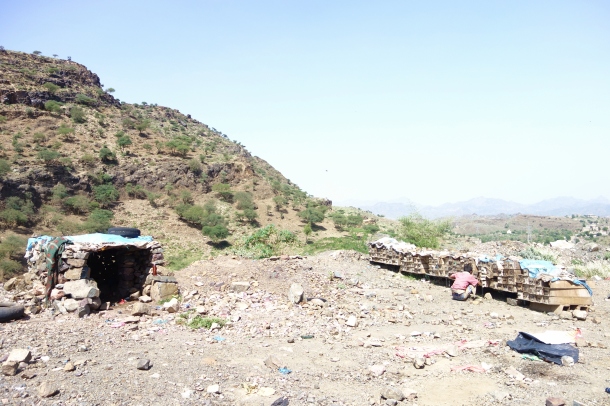 Another honey dealing operation in Yemen that is organized the same way… The men at this camp live under the blue tarp on the right:

I upload pictures to this site at a very high resolution, so I encourage my readers to click on the pictures to bring them up to full size as many more details will emerge and, as they say, a picture is worth a thousand words.

4 thoughts on “The Honey Dealers Of Yemen”