Aside from the historical significance of these images and their interesting subject matter, I am also laying the foundation for a future article with this post…

So, first of all, who was Roddy Scott? Roddy Scott was a talented and dedicated freelance journalist/photojournalist who was, by all accounts, a genuinely decent person of the sort that almost anyone would have enjoyed his company.

Born in in Huntingdon, England in 1971, as Gervaise Roderick (Roddy) Scott, Roddy grew up in rural North Yorkshire (this rural experience would serve him well later in life). He obtained a degree in history from Edinburgh University and it was during his university days that he developed an interest in journalism. Serving as the foreign news editor of The Student newspaper (founded by Robert Louis Stevenson, The Student is an independent publication produced by university students at Edinburgh and is the oldest student newspaper in the UK), Roddy would spend his holidays traveling and making contacts throughout the Middle East.

Upon graduating in 1994, Roddy chose the difficult path of a freelance photojournalist rather than submitting to an office job. His work would take him to conflicts ranging from Ethiopia to Sierra Leone to Albania to Iraq to Afghanistan and many more. However, it was to Chechnya and the Chechens that Roddy really connected.

In September of 2002, Roddy accompanied a group of Chechen rebels that were traveling from Georgia’s Pankisi Gorge into Chechnya and then over to Ingushetia to battle the Russians. On September 26, 2002, in Galashki, Ingushetia, near the border with Chechnya, the group was ambushed by Russian forces and after a tremendous firefight were wiped out.

Roddy survived this battle and attempted to surrender to the Russians – holding his hands up and waving an improvised white flag – but the response of the Russians was to shoot him in the face. Following his death, the Russian propaganda machine fired up and Roddy was defamed by Russian officials and declared to be a “terrorist.” Taking matters even further, the Russian government attempted to extort Roddy’s family by refusing to issue a death certificate or to return his body unless a significant sum of money was paid. Roddy’s family defeated this attempted extortion by simply demanding that, in true British tradition, Roddy be buried where he fell.

The Guardian published an eloquent and moving obituary with many more details of Roddy’s life and death, which I would strongly suggest reading. That obituary can be found here.

The BBC obtained the film that was in Roddy’s camera and published the pictures they found on it in October of 2002. Therefore, the pictures below are courtesy of the BBC…

The group setting out from Georgia’s Pankisi Gorge – a sanctuary for anti-Russian fighters in the Caucasus, just over the border from Russia: 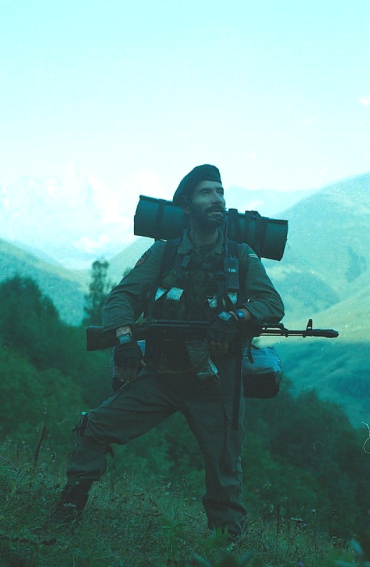 Making their way up the increasingly steep Caucasus mountains toward the Russian border… That MANPAD (Man-portable air-defense system) will become very relevant later: 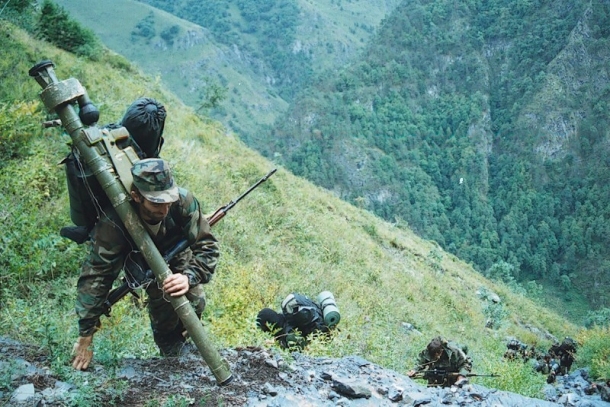 At the top of the mountain pass and about to descend into Chechnya, this fighter is using the scope of his rifle to survey the landscape below for a potential ambush from Russian forces: 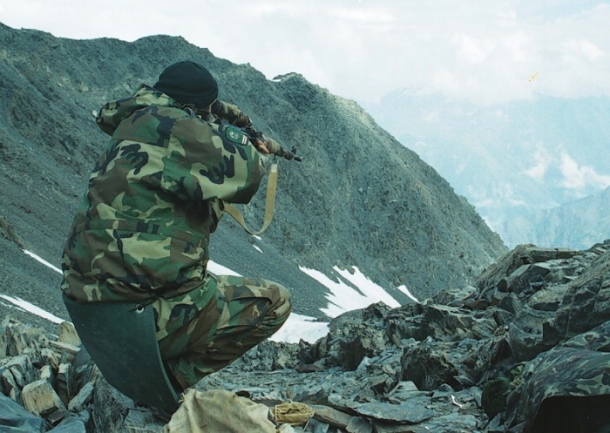 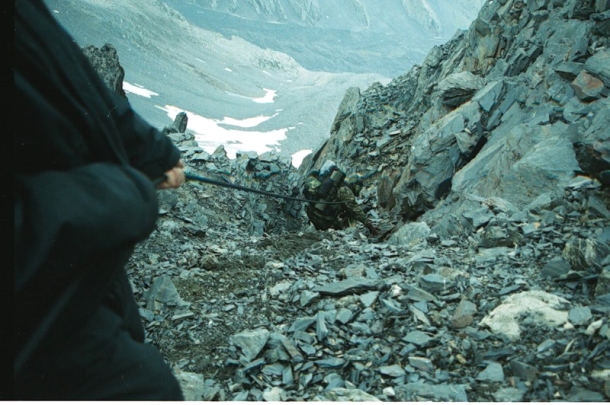 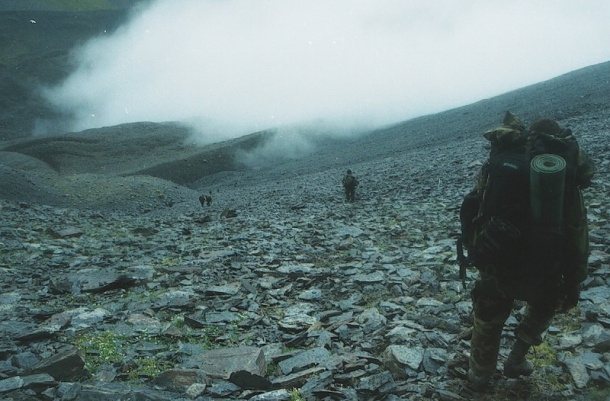 Traversing the Caucasus mountains to get over to Ingushetia: 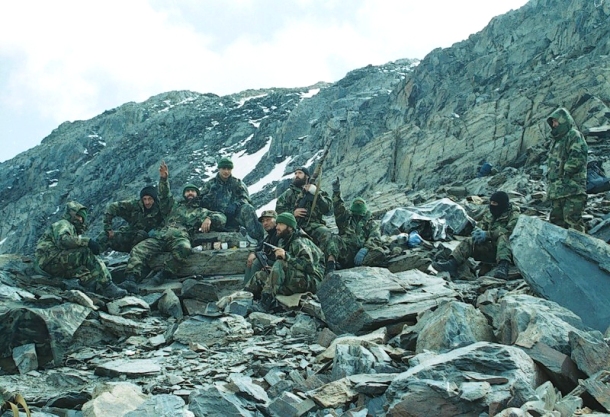 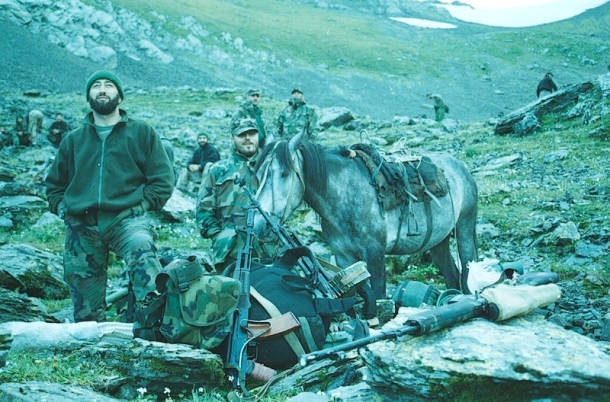 One of the fighters taking a break during the difficult journey:

Maintenance work – probably in a camp: 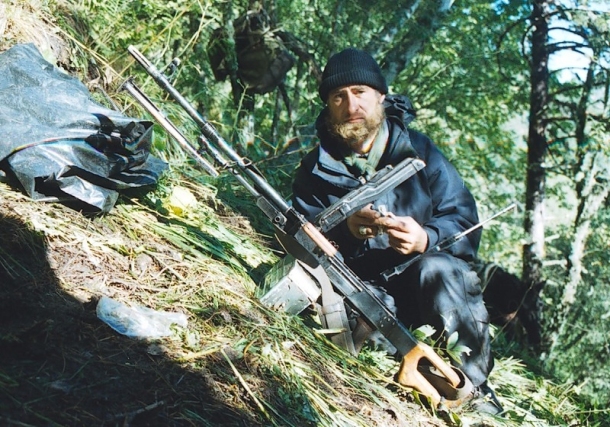 A view of a campsite along the way… In the foreground, one of the fighters can be seen with the surface-to-air missile that was seen in the earlier photographs. During the firefight following the ambush initiated by the Russians, the rebels managed to shoot down a Russian helicopter and it was almost certainly this very weapons system pictured below that was responsible: 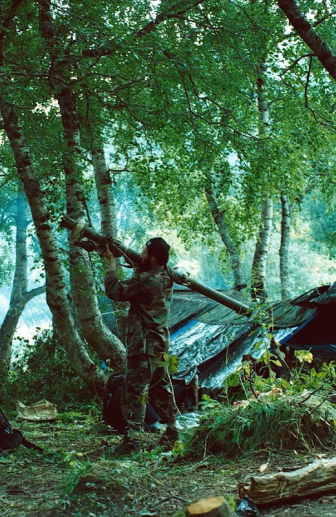 Final moments – the group has made it into Ingushetia and is just about to be ambushed:

The above was the last picture on Roddy Scott’s camera.

Following his death, Roddy’s family established the Roddy Scott Foundation, which is dedicated to providing educational opportunities to the children of Chechen refugees in the Pankisi Gorge.

One thought on “Roddy Scott And His Last Pictures”