The future of Iraqi Kurdistan is on the minds of many in the region today as the invasion of the Islamic State in the summer of 2014 has now been successfully repelled. Many dire and pessimistic predictions can be heard, with some fearing a conflict with Baghdad over territory seized by the Kurds during their offensive against the Islamic State and others fearing further clashes with the Shia militias operating in Iraq. Some even raise the possibility of a civil war in Kurdistan sparked by competing political parties.

Speaking to us inside the offices of his company’s villa, located in an upscale neighborhood of Erbil, a far more upbeat assessment of Kurdistan’s future can be heard from a charismatic pacifist named Chali Mayi. Mayi is soft-spoken, but speaks forcefully of his goals for making fundamental, positive changes within Kurdish society. “We need to better understand how conflicts are created and stop them before they start,” he declares. In doing so, he hopes to transform local attitudes and behaviors in a manner that can inspire others to take a more constructive approach to the problems of the region. Mayi’s hopefulness even extends to increased gender equality in Kurdistan. “After all,” as he observes in an old Kurdish proverb, “a lion is a lion whether it is a male or a female.”

Cynical readers may already be dismissing such optimism, but there’s something else to know about Chali Mayi, which may give pause to this sentiment. Despite being an idealist and a pacifist, he also happens to be the CEO of the Erbil Training Center (ETC), the largest private military training facility in Iraq as well as the first, and only, training facility recognized and licensed by the Kurdistan Regional Government (KRG) to perform training for government forces and private security companies.

ETC, which started out as a simple shooting range in 2015, has grown into a 63-acre modern training facility located 23 kilometers south of Erbil on the road to Kirkuk that contains all of the equipment and features one would find at an advanced military training center such as those in the United States or Great Britain. The facility boasts several shooting ranges, a 25-meter tower for helicopter training or rappelling work, a tactical driving track, a dojo for close combat training, classrooms, a well-stocked armory and even a weapons lab.

The Erbil Training Center has even greater ambitions for the features offered at the facility though. Their Chief Operating Officer, an Italian named Alex Pineschi, enthusiastically ticks off a wish list of future projects that includes a swimming pool, a mock Iraqi village, a bus and an airplane for practicing assault scenarios and an airfield. “We want this company to be the best in the world at what we do,” he says. 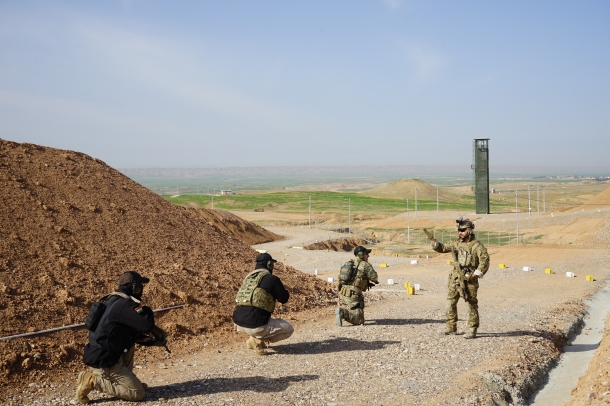 Pineschi is yet another interesting individual associated with ETC and is not simply a figurehead added to the company to give it a more Western face. He served for four years in Italy’s Alpini, the mountain warfare military corps of the Italian Army, before forming his own company and working as a security contractor in Africa, Asia, and the Middle East both on land and on ships for anti-piracy operations.

Eventually burning out on working for large oil companies that he viewed as responsible for many of the problems in the regions where he worked, Pineschi took notice as the Islamic State seized the world’s attention. Finally, in November 2014, he purchased a one-way ticket to the city of Sulaymaniyah and arrived in Iraqi Kurdistan with $1,000 in his pocket to volunteer his military expertise to the Kurds, who at the time had lost large swaths of territory and were facing vigorous and sustained offensives by the Islamic State.  However, Pineschi had difficulty persuading the Kurdish Peshmerga military forces to take him seriously and his money did not last long. He ended up sleeping on the streets and missing meals before finally finding a Peshmerga commander that agreed to give him a chance to prove himself. He soon ended up in an elite Kurdish special forces unit known as Task Force Black, which saw a high number of missions and heavy action over the following years. Pineschi eventually became a team leader and an instructor for the unit.

Pineschi continues to work as a volunteer with Task Force Black and is still called out on occasion for counter-terrorism operations. However, his primary focus is now on the significant responsibility he has as Chief Operating Officer for the Erbil Training Center.

Pineschi’s extensive combat experience on the ground in Kurdistan fighting alongside the Peshmerga has given him the ability to relate well to the Kurds, but also to understand the shortcomings in their knowledge. One example of this is a greater focus on psychology rather than just technical skills in ETC’s training. “We work on their psychology in order to instill a strong sense of discipline as well as a fighting spirit, but also to try to limit damage from PTSD,” Pineschi explains.

The Kurdish Peshmerga have a reputation for bravery and have been an effective fighting force in northern Iraq. However, they lack the image of professionalism that one would associate with the military of a country such as Israel, Germany or the United States. It is the goal of Pineschi and the Erbil Training Center to change exactly that, one class at a time. “Our aim is to create a new generation of Peshmerga with Western standards,” Pineschi states. “Probably the most important thing the Kurds can do for their Peshmerga now is to create a military academy and training school that trains soldiers and officers up to NATO standards.” 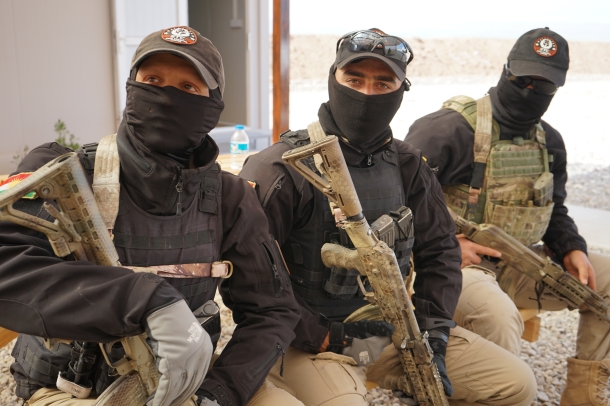 ETC employs a mix of multinational instructors, from countries as diverse as Brazil, Romania and Italy. However, all instructors have one thing in common in that they all have significant military and combat experience. Classes are taught in the universal language of English, but Kurdish interpreters, with extensive military experience themselves, work alongside the English-speaking instructors to get the message across to the Kurds. The Erbil Training Center has only foreign instructors at this time, but as part of their ambition to professionalize Kurdistan’s military forces, they hope to soon have Kurdish instructors as well. “We want to train the trainers,” Chali Mayi explained.

Pineschi estimates that currently 80% of the training done at ETC is for Kurdish military and police forces, but training is also offered for private security companies as well as individuals as part of a class or one-on-one. Classes for civilians focus on such core skills as basic and advanced handling of pistols and carbines as well as marksmanship. Courses for private security companies include such staples as courses on close protection details and security driving. The courses restricted to government entities cover a broad array of military needs ranging from artillery training and helicopter insertion courses to military parachute training and K9 handling courses to such core essentials as basic infantry training.

Chali Mayi and Alex Pineschi both described the potential for Kurdistan to evolve into a country resembling Israel. Pineschi expanded on this idea further by explaining that he imagines pro-Western Kurdistan harnessing its vibrant economy and encouraging its budding startup scene in order to grow into an island of prosperity and stability. Like Israel, this island would require a strong military to protect it from the sea of hostile neighbors and endless conflicts surrounding it. Pineschi and Mayi, of course, both see the Erbil Training Center as part of the means for achieving the dream of becoming like Israel, which would be both good for Kurdistan and profitable for them.

One thought on “The Process Of Professionalizing Kurdistan’s Military Forces”