Dire Dawa is the closest Ethiopian military base I know of to the Somalia border. If it is not the closest, it is still a crucial one, and so it was from here that large numbers of Ethiopian troops staged before pouring into Somalia in 2006 (and retreated to in January of 2009).

The number of forces involved in the U.S.-backed Somalia campaign are difficult to calculate because of a lack of formal organization and record-keeping as well as a significant disinformation campaign.

According to the BBC, “The United Nations estimated that at least 8,000 Ethiopian troops were in Somalia” while the AP suggested the number was closer to 12-15,000.

Ethiopia only admitted to 3,000–4,000 being involved, although the Islamic Courts Union claimed the Ethiopians had 30,000 troops in Somalia.

Whatever the actual number, I was not surprised to read of Amnesty International condemning all sides in the recent war, while singling out the Ethiopians for particularly strong criticism.

I was staggered by the thuggish behavior and lack of professionalism displayed by the forces of the Ethiopian State during our visit and was, therefore, not surprised to read of the same types of individuals engaging in war crimes.

According to Amnesty International…

“We have received many reports of ‘slaughtering’ or ‘killing like goats’ by Ethiopian troops, referring to killing by slitting the throat. The victims of these killings are often left lying in pools of blood in the streets until armed fighters, including snipers, move out of the area and relatives can collect their bodies. Such crimes were exposed after the Hidaya Mosque massacre, which occurred on April 20, 2008 and saw Ethiopian troops slaughtering civilians.”

Now, dear readers, I understand that you have certain expectations as to what standards my photographs should meet. I shall warn you in advance that the following pictures do not meet my normal standards. However, I was shooting on maximum zoom out the window of a moving aircraft and the Ethiopians are extremely uptight about what they perceive as security, thus requiring some discretion on my part. 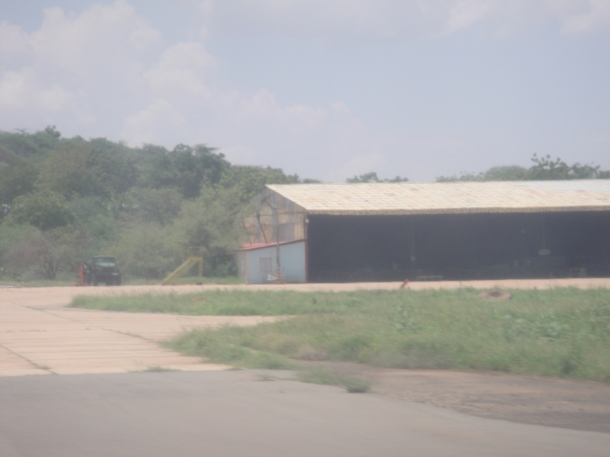 The Ethiopian Army is equipped with predominantly Soviet-made weapons.

A variety of armored personnel carriers were present, but I don’t know shit about APC variants and so can only confirm that they were present.

There was a fair amount of artillery on display, but I was only able to identify 120 mm mortars and a handful of Howitzers with certainty.

Aircraft were carefully hidden away behind camouflage nets or behind rows of trees, but as we were landing, I was clearly able to see MiG-21, MiG-23 and Su-27 fighters.

Helicopters were more out in the open and I was able to identify Mi-8, Mi-17 and Mi-24 helicopters.

With this much firepower at one base, you can see why Ethiopia is ranked as one of the largest military forces in Africa and the 29th largest in the world.

7 thoughts on “War in Somalia: The Ethiopian Military at Dire Dawa Airport”