A first view of the city of Ibb from a distance… Ibb is at an elevation of nearly 7,000 feet and the surrounding mountains ensure ample rainfall for the region, making this one of the greenest areas in Yemen:

Interestingly (and coincidentally), the route we followed on the first days of our visit to Yemen tracked the advances of the Houthi rebels very closely. We were always just several hours ahead or several hours behind the front lines of the Houthis as they moved swiftly into new areas. In the case of Ibb, the rebels had asserted control over the city just a few hours prior to our arrival.

Amusingly, on the surface, the only way that one could really tell that the rebels had taken over was that all of the checkpoints were manned by Houthi fighters now rather than by the official police or military of Yemen.

Look at these street scenes below as we entered Ibb… Everyone was just carrying on as normal and even the checkpoints were operating as they had under the control of the government forces (our documents from the government of Yemen granting permission to travel through these zones were considered valid regardless of whether Houthi rebels or government forces or Sunni tribesmen were reviewing them).

Ibb – just hours after the Houthis had swept into the city:

A Houthi fighter at a checkpoint in Ibb:

Below is the main gate to the Old City of Ibb… Just inside the gate is a police headquarters (which you’ll be able to see if you zoom in on the picture). Even here, the police seemed remarkably placid given the Houthi takeover of the city just hours before and despite the fact that convoys of Toyota pickup trucks (filled with heavily armed Houthis) were massing in the streets of the city:

However, the Houthis were not massing in the streets of Ibb for nefarious reasons, but because their forces were actually in a pitched battle with al Qaeda linked fighters in the next province over – Al Bayda – and reinforcements were being organized.

The different factions that are fighting in Yemen are sometimes difficult to keep track of, but there are a couple of main themes that are playing out with the backdrop of Yemen’s rapidly dwindling water and oil reserves…

The first theme is tension between the north and the south of the country. Yemen was actually divided into two countries until fairly recently – North and South Yemen – which were reunited in 1990. However, this has never been a comfortable reunification and there has been constant separatist tension and fighting between the two sides. The southern regions of Yemen are pushing strongly for independence again, which leads the government to crack down more, which just pushes the Yemenis in Aden and elsewhere in the south to strive for greater freedom and independence. Same old cycle. Same old story…

The second theme is the ongoing battle across the Middle East between the Shia and the Sunni. The Houthis are Shia – said to be supported by Iran – and al Qaeda, of course, is made up of Sunnis. So, one sometimes sees al Qaeda in the Arabian Peninsula (AQAP) attacking the government and sometimes one sees al Qaeda fighting the Houthis (whom they view as heretics) alongside the government forces. However, it isn’t just al Qaeda that feels threatened by the Houthis. The Sunnis in Yemen feel threatened by the Houthis and their Shia supporters as well, so they too have taken up arms against the Houthi fighters.

So, that was the scene in Ibb when we arrived. However, as I mentioned, it was business as usual on the streets.

As one Yemeni remarked to us, “It’s just another group of assholes telling us what to do. Nothing will be any different”

As is true with most ancient city centers in Europe and the Middle East, the Old City of Ibb is something of a labyrinth. So, one never knows what will be around the next twist in the street or alleyway or if it will simply be a dead end: 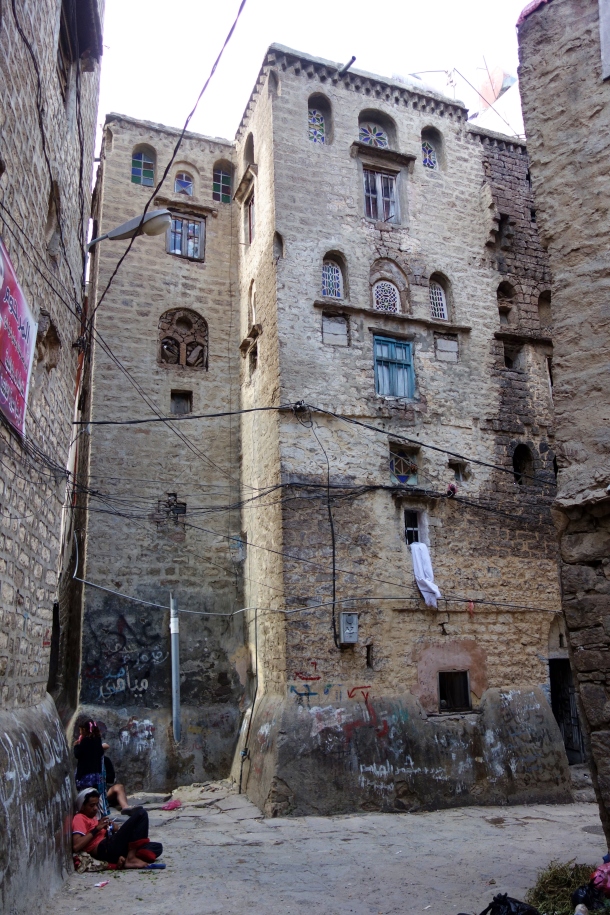 We arrived in Ibb in the afternoon and so many of the residents of Ibb were settling down for a session of chewing khat. The lad below has got his bag of khat, some water and cushions to relax on, so he is set for the rest of the afternoon: 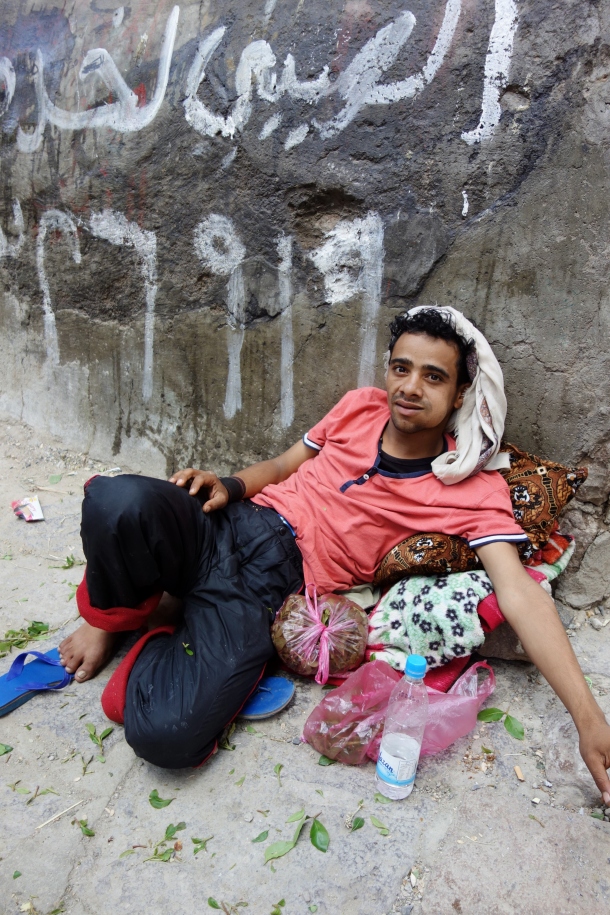 Another man nearby that was likewise sprawled out in the street to enjoy his khat… Khat is extremely popular in Yemen and by the late afternoon, most of the men one will see – and even young boys – will have the characteristic bulging cheek: 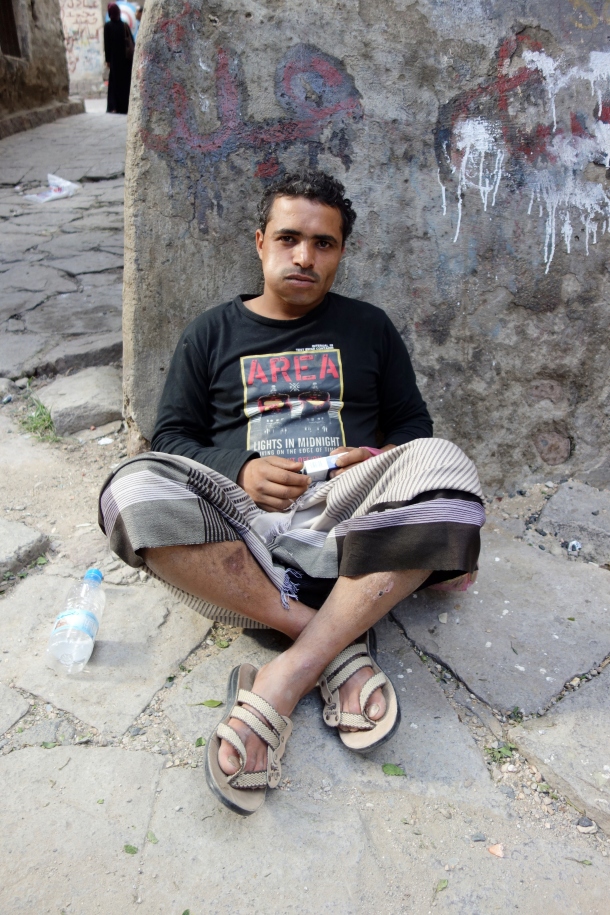 Pushing deeper into the Old City of Ibb:

One can only just see the nose of the woman in front… The rest of their faces are completely obscured. Taking a picture like this in Afghanistan would usually result in big trouble, but the Yemenis are more relaxed about such things:

Some friendly children we met… Many of those that we encountered were eager to have their pictures taken. Sometimes when walking the streets, a Yemeni man or child would call out for me to come and take their picture. I was always happy to indulge them:

An efficient way to move children around, no?

And speaking of moving people around… This is a very common form of transportation across not just Ibb, but all of Yemen:

A commanding view of the modern city of Ibb from the heights of the Old City reveals why many people prefer the old over the new:

5 thoughts on “The City Of Ibb”