Many people think of Sudan as a barren desert and, to be sure, large parts of it are. However, two branches of the Nile River twist through the length of Sudan. So, river life is very much a part of Sudan as well and was essential to the powerful Nubian kingdoms that thrived here in ancient history. The river was important then and it is important now.

And, much like the river boats and culture of the Mississippi River during America’s “Wild West” era, a similar scene can be found along the Nile River in today’s Sudan. A whole ecosystem of trade and commerce revolves entirely around the Nile River. River boats and barges move up and down the Nile, transporting basic commodities such as livestock, salt and dates. Ferries are essential in connecting people and vehicles to roads that do not have bridges. When the ferry is full, it leaves and the captains make sure that they are very full before departing. Fishermen rotate through villages along the river. Traders move up and down the banks of the Nile River, trying to make some money off of whatever they are carrying on their backs. Men hunt the crocodiles that glide through the muddy waters of the Nile River. Shady characters lurk near the loading or unloading points for the ferries and river boats, hoping to make some easy money. Smugglers make their way up and down the Nile at night.

These men harvest a plant that grows along the Nile River and sell it to those with livestock in the arid deserts nearby as feed for their animals: 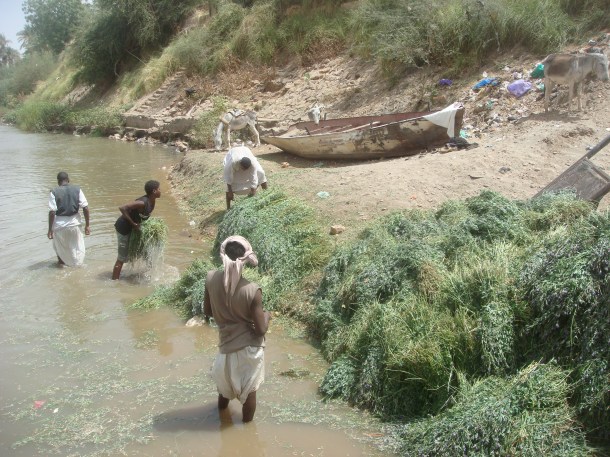 You’ll notice that they are working in the water… Having seen them myself, I can assure you, dear readers, that there are very large Nile crocodiles that inhabit those waters. We were advised by several individuals that the men are occasionally picked off by these crocodiles, which sort of puts the complaints of those that work behind a desk in perspective:

After the river plants have been washed and allowed to soak up as much water as possible, they are stacked on the back of these donkey carts and hauled off to street markets in the surrounding villages for sale: