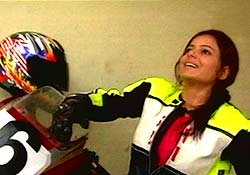 She has not merely stormed a male bastion but Alisha Abdullah has actually been racing past her male competitors on her 115 cc four-stroke bike.

This 17-year-old Chennai college girl is the only woman bike racer on the current circuit. She has had quite a few podium finishes in the UCAL Rolon Racing Championships in Chennai and Coimbatore.

Alisha is leaving for Malaysia shortly for a week’s training under former racer Barry Leong, a prelude to her entry into the FIM Championships, to be held in Indonesia, malaysia and China.

From go- karting to formula car racing to the world of bikes, she has lapped up life on the fast track especially when it comes to overtaking men.

“It’s a great feeling when you defeat the boys and they put their heads down, some even with tears in their eyes. I love speed,” said Alisha Abdullah, Bike Racer.

He ensured that daughter dear’s passion for racing was kick started when she was just eight.

“I noticed her potential when she was go-karting. I couldn’t afford to have her continue with cars and bikes suited her well too.” said R A Abdullah, Alisha’s father.

The only speed breaker to this exciting career is the complete lack of sponsorship. But for now parental support is just about enough to help her chase her passion on her bike.

My kind of girl…