One museum definitely worth checking out in Bogota is the Museo Historico Policia (Museum of Police History) which is located just west of Plaza de Bolivar. The admission is free and allows one to see the inside of the lovely ex-headquarters of Bogota’s police force (built in 1923) as well as to review the great artifacts and items of historical significance the police force of Bogota has accumulated over the years.  You’ll be shown around by 18-year-old, English-speaking local guides that are serving a one-year compulsory service with the police.  And if you ask, you can get some solid stories out of them.

Here is the entrance to the museum:

One of the first questions our guide asked us was if we would be interested in seeing weapons.

“Yes, we would indeed be interested in seeing weapons,” I said.

We were led into a large upstairs room that was completely filled with gun cases and gun cabinets containing weapons that had passed through the hands of Bogota’s police forces over the years – weapons confiscated from the hands of criminals such as these interesting specimens below: 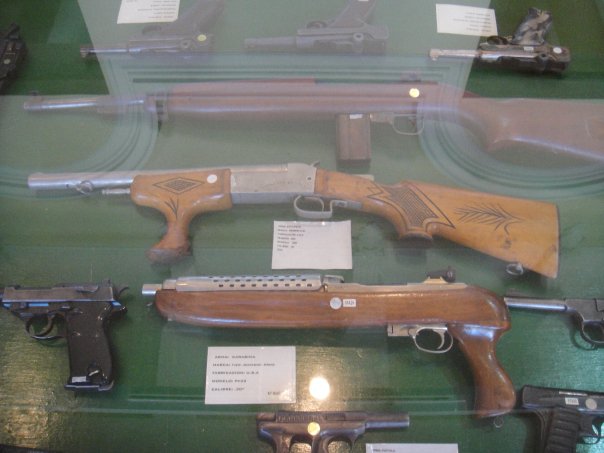 Or weapons used by the Bogota police themselves such as this riot gear:

However, the really good stuff is in the basement…  And you know you’re getting to an interesting section because one of the first things you see is this massive Harley-Davidson that used to belong to Pablo Escobar on display:

In fact, they have a whole section of the museum dedicated to Pablo Escobar:

Inside, one can see such curiosities as this model of his bullet-ridden corpse (reflecting the plastic surgery he underwent to change his appearance during his final days on the run):

Other members of the Medellin cartel are not ignored as this flow chart below of the organization demonstrates, but Pablo Escobar is the main focus of the exhibit.  By the way, if one’s photograph rather than just one’s name appears on the flow chart, one has been arrested, or more likely, is dead as the police were not exceptionally concerned with capturing suspects alive and this is a rough business:

These were the personal guns of Pablo Escobar… He apparently had a thing for Uzis.

And in the bottom of the display case containing his guns are some of his personal effects such as his Ray-Ban sunglasses, a Swiss watch, a video recorder, etc.

Here is the satellite phone that Mr. Escobar used:

The item below is particularly unique… It is a tile retrieved from the roof that Pablo Escobar was gunned down on. And if you look closely, you can still see his dried blood on the tile: 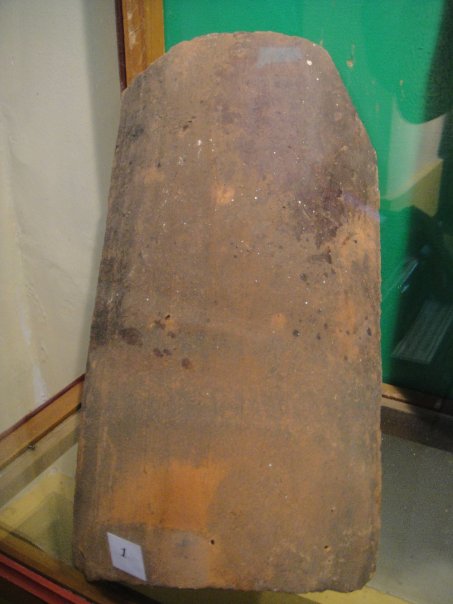 This is some of the gear that was used by U.S. and Colombian forces to track Escobar through calls he made on his mobile phone:

Pablo Escobar created and lived in a luxurious country estate and zoo called Hacienda Napoles (Spanish for Naples Ranch) and had planned to construct a Greek-style citadel near it.  However, Escobar’s estate was expropriated by the government after his death and has since been converted into a theme park.  If you wish to visit, it is one kilometer from the Colombian town of Doradal.

The web site is: http://www.haciendanapoles.com/index.php

If you wish to visit Escobar’s grave, he is buried in the Colombian city of Medellin at the Cemetario Jardins Montesacro.

Pablo Escobar is certainly not the only prominent drug dealer mentioned in the basement though. Also on display is my buddy, Carlos Lehder, and characters such as Jose Gonzalo Rodriguez Gacha A.K.A. “El Mexicano” and these pistols that used to belong to him – a Browning 9mm and Colt-MK .45 cal. 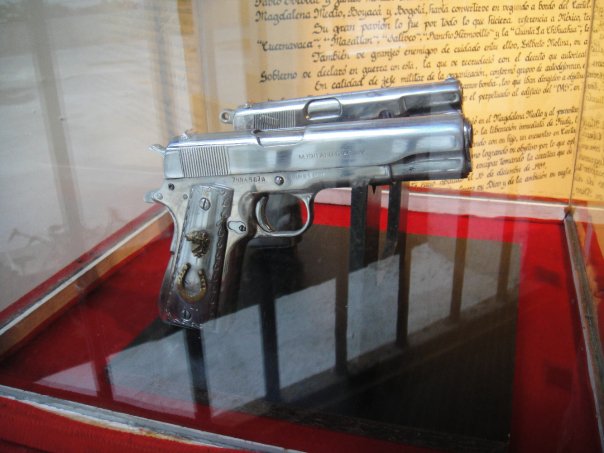 Aside from drug dealers and a section on guerrilla activity, the Museo Historico Policia also houses a section on punishment. It includes such gems as this original executioner’s block and axe imported from England:

And photographic displays such as this decapitation sequence shot in Turkey… The photographer did an apt job of capturing the blood spraying out of the condemned man’s neck: 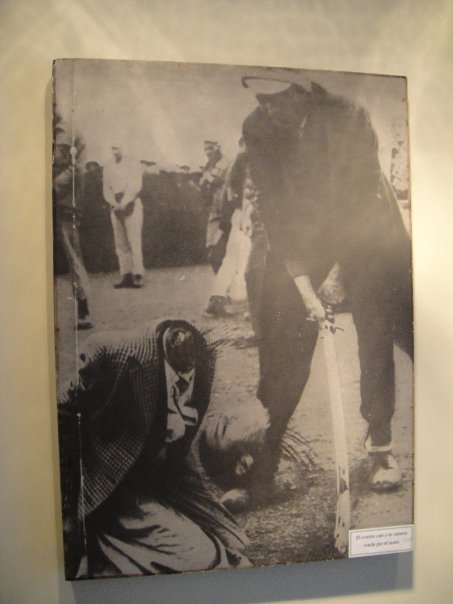 I would have included a photograph of our guide in this sequence as he was quite pleasant. However, for security reasons they are not supposed to have their photos taken.

A modest memorial in the back courtyard of the museum reinforces the wisdom behind this policy. The memorial is a simple mural painted of a scene lit by starlight.

I asked the guide if each of the many, many stars represented a police officer killed in the line of duty.

“No,” he responded quietly, “each star represents 100 officers killed.”

10 thoughts on “The Museo Historico Policia and Pablo Escobar”