First of all, don’t be put off by the guide books that caution against exchanging money on the black market because it is illegal. This is a foolish position to take as, if you accept the official exchange rates, you will find that prices in Venezuela exceed those found in London or Manhattan. Exchanging money on the black market is incredibly commonplace and is an activity commonly engaged in by government employees themselves.

Below is a black market money dealer we did business with in Valencia: 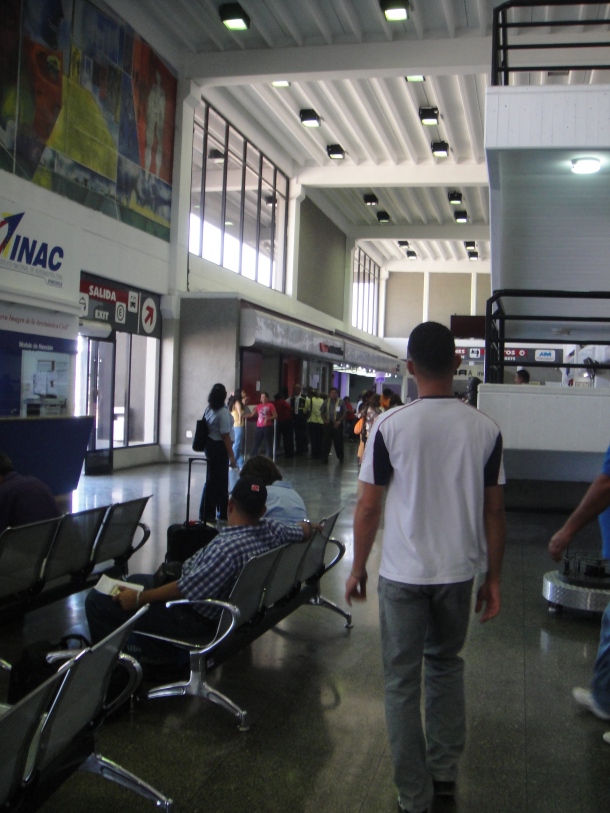 Secondly, upon arriving in Venezuela from an international destination, do NOT exchange your money at the airport. A variety of sharks will immediately begin to swirl around after you have passed through Immigration & Customs – just ignore them and whatever they might be offering and head straight outside to catch a taxi.

Unfortunately, I was suckered in by a charming Venezuelan government employee – “Just call me Johnny” – at the Caracas airport that, to make a long story short, did a splendid con job. I ended up exchanging 500 euros with him at a rate of four Venezuelan bolivars for one euro. This was a horrendous rate and it should have been seven bolivars per euro, so the first part of our trip was pretty expensive (It was 7 to 1 when we were there, but just after we left, the bolivar was devalued, thus the new rate should be far superior).

The mistake I made was to check the black market exchange rates on the internet before we left and to discover that the going rate was four bolivars per U.S. dollar. So, I had the 4 to 1 ratio stuck in my head. Jet-lagged, exhausted and in the hands of a brilliant conman, I accepted the 4 to 1 ration for euros and only realized my mistake after it was too late.

Don’t be a fool like I was, and avoid any service offered at the airport – even something as seemingly innocent as assistance with hailing a taxi will end up with you getting ripped off. Do everything yourself. The operators at the airport are professional sharks and will lock on to you when you are at your most vulnerable. These operators include government employees as well. In fact, they are the worst and so don’t think you can trust someone just because they are wearing a government uniform.

Your taxi driver will be delighted to accept your euros or your dollars – as will your hotel and anyone else you encounter – so don’t feel the need to exchange money right away.

If you are suspicious of the rates quoted to you by your hotel, check with another hotel and see what their rates are, but the hotels are generally trustworthy in providing the official black market rate.

I sincerely hope this helps someone.