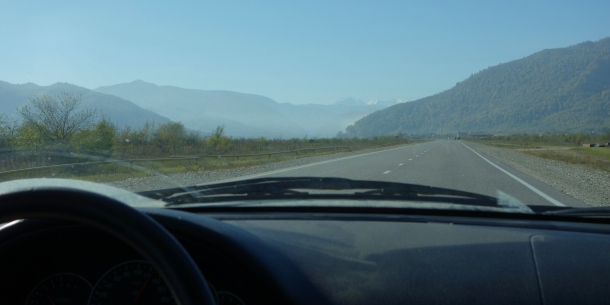 As I have mentioned in previous posts, checkpoints are set up everywhere in Chechnya and the mountains are no exception. The mountainous areas of Chechnya have not been fully subdued and given the proximity to Georgia, and particularly Georgia’s Pankisi Gorge, security is even tighter up here with many zones of restricted access.

Below a Chechen policeman inspects passing vehicles at a small checkpoint:

Just past the policeman is a natural spring along the road that is cut into the cliff on the left… These denim-loving Chechens have stopped to partake of its cold, pure waters as we did:

The Argun River (or Orga River if we are speaking Chechen) runs along the length of the road up into the mountains. So, throughout your journey, you’ll have it nearby on one side or the other. The Argun River originates in the mountains of northern Georgia: 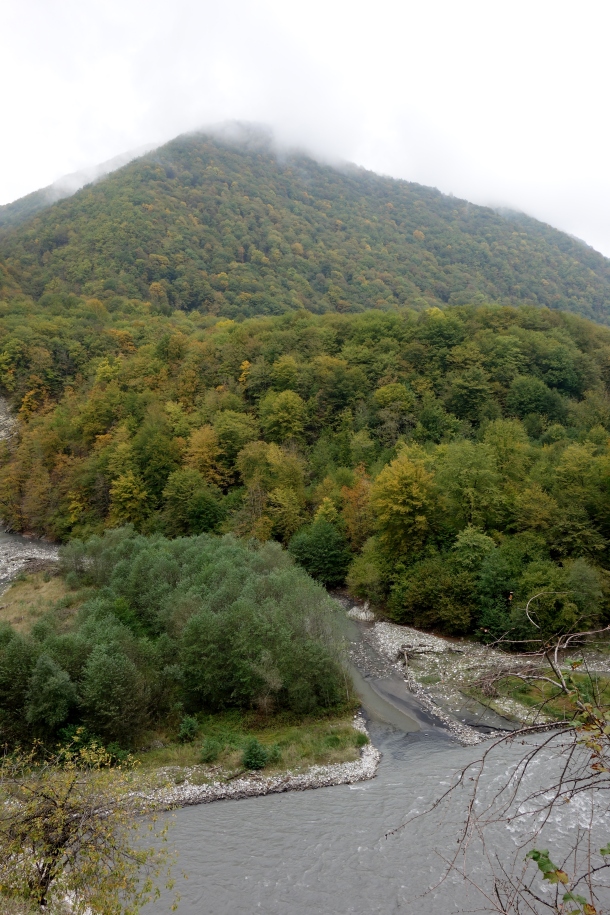 Every inch of Chechnya was fought over in the most recent conflicts (known as the First and Second Chechen Wars, although in reality they are simply the continuation of centuries of fighting against the Russians) and the mountains played a significant part in this. The section below, near the town of Shatoy, is where a devastating ambush (the Chechen attackers were hiding in the brush on the left of the picture) was carried out against a Russian convoy – the Russian 2nd Battalion from the 245th Motor Rifle Regiment -during the First Chechen War:

With the steep embankment on the left and a cliff dropping down to the Argun River on the right, the Chechens chose the site of the ambush well. The Russian convoy consisted of a mixture of trucks, fuel tankers, armored personnel carriers (APCs) as well as a T-80 tank and, after the small Russian advance reconnaissance team was allowed to pass through, the ambush was initiated by a series of RPGs which destroyed the unit’s command vehicle and an APC at the end of the column. With these two vehicles destroyed, the rest of the Russian unit were trapped in between. The Chechens claimed that in the three hours of fighting that followed, the Russians were left with only 12 survivors out of 200 soldiers and had 27 of their armored vehicles and trucks burned. Official Russian sources claim that “only” 53 soldiers were killed and 52 wounded. However, outside evidence seems to place the death toll closer to that of the Chechen claims.

This is the town of Shatoy today… By almost any measure, it is a fairly grim place and has not even come close to recovering from the damage inflicted by the conflict. Given its strategic location, Shatoy is host to a large Russian military base on a hill overlooking the town:

One of the many homes and buildings that were destroyed by the fighting in Shatoy:

One needs permission to travel into the mountains past Shatoy and these men are here to make sure you have that permission. Unlike most checkpoints in Chechnya, the Russians are in full control of this one:

Every vehicle gets checked and, perhaps needless to say, the Russians were somewhat surprised to see the British, American and Italian passports we possessed as this area is not a normal tourist destination. Nevertheless, they were friendly and started joking with me to send their regards to President Obama.

Shortly after the checkpoint manned by the Russians, things get more interesting. The road turns to dirt and the mountains become more rugged: 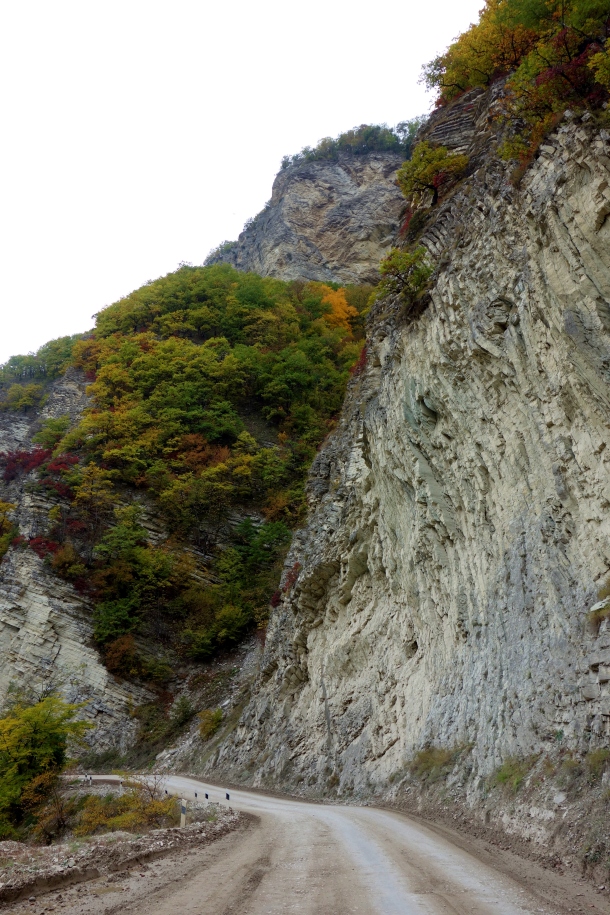 In addition, there is more of a “Wild West” atmosphere here. Do you see the faint column of smoke below along with the military truck pulled back into the trees? This particular crew is not doing a good job of maintaining their secrecy, but all along this route are Russian military personnel (such as those below) hidden in the rocks and the forest seeking to ambush fighters that infiltrate in from Georgia: 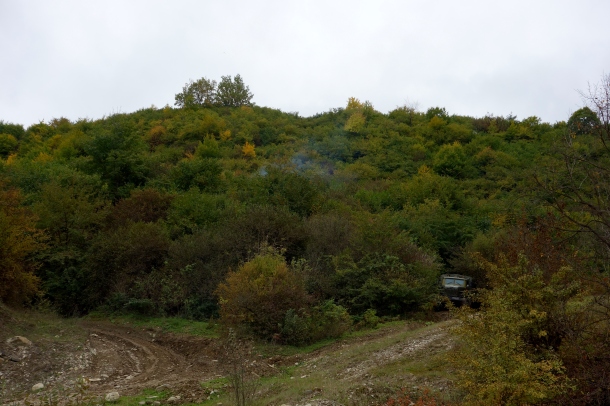 Moving farther up into the mountains… Before the First and Second Chechen Wars the hillsides along the Argun River were populated by numerous farms and houses. Not many remain today:

The Argun Gorge… We stopped here to take this picture and as we were getting back in the car, the chatter of automatic weapons fire shattered the stillness in the forest down below: 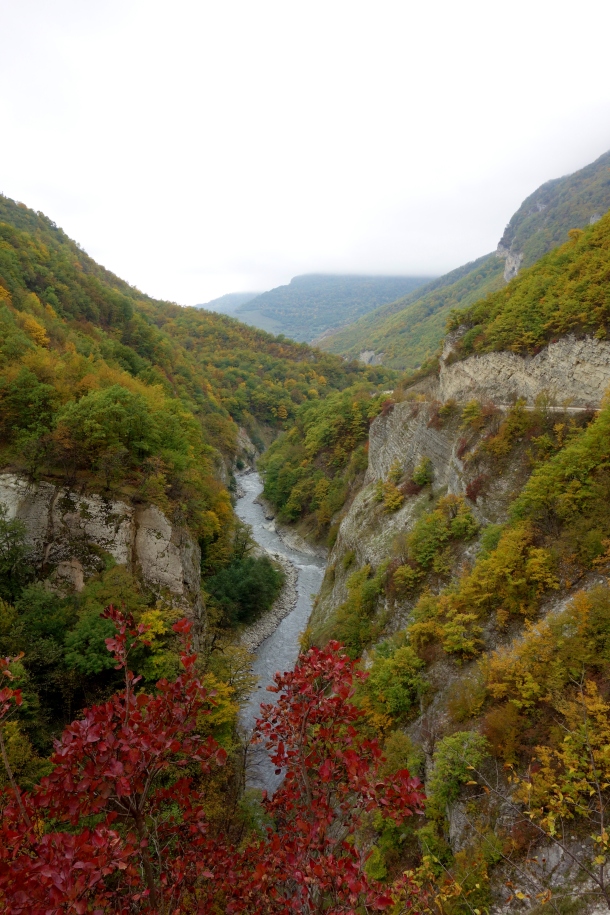 With no guard rails and sheer cliffs, the narrow road up into the mountains is not for everyone:

And certainly there are many killed along the road (in accidents, not just combat). The memorial below is for two Russians that went over the edge… The men were members of Russia’s military and were traveling in a truck that was transporting a large sum of cash to pay the wages of the soldiers in their unit. When the men failed to show up, it was assumed that they had absconded with the money. However, several years later, two Chechens went over the cliff in the exact same spot. A group made their way down the cliff to recover the bodies of the Chechens and discovered the Russians down there as well:

The mountains of Chechnya: 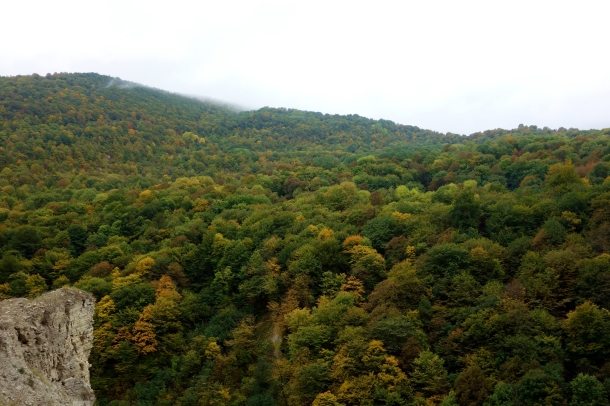 I’ve mentioned the significance of these watchtowers in the North Caucasus before and these twin towers at Ushkaloy are a famous landmark in Chechnya… Believed to be more than 900-years-old, these towers are built into the rocks along the Argun River so that they actually have only three walls and a roof that is derived from the natural stone as well: 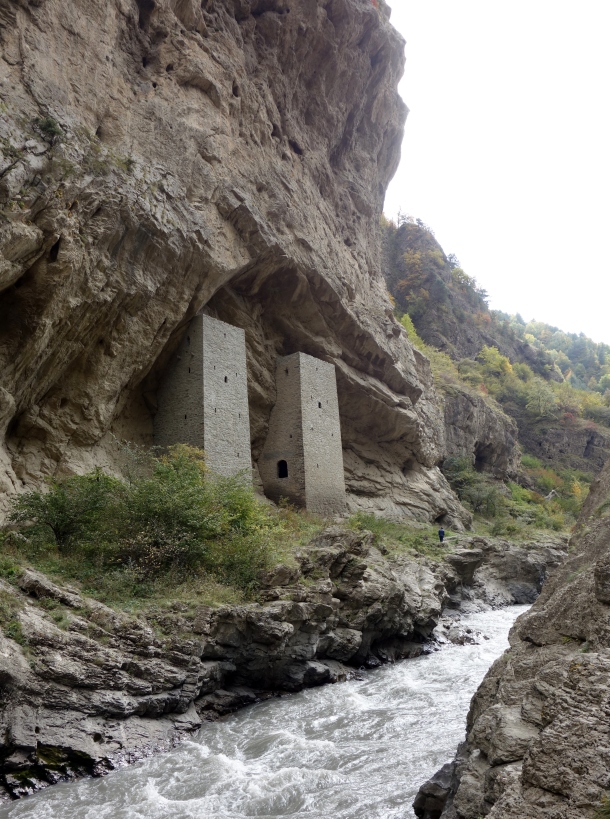 This Chechen family was also visiting the Ushkaloy Watchtowers when we were there: 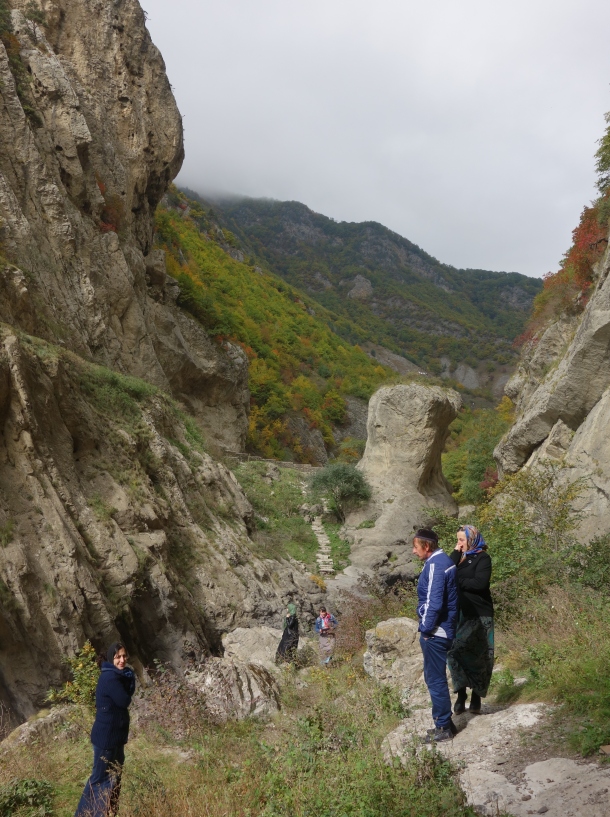 A closer view of one of the towers with the matriarch of the family next to it: 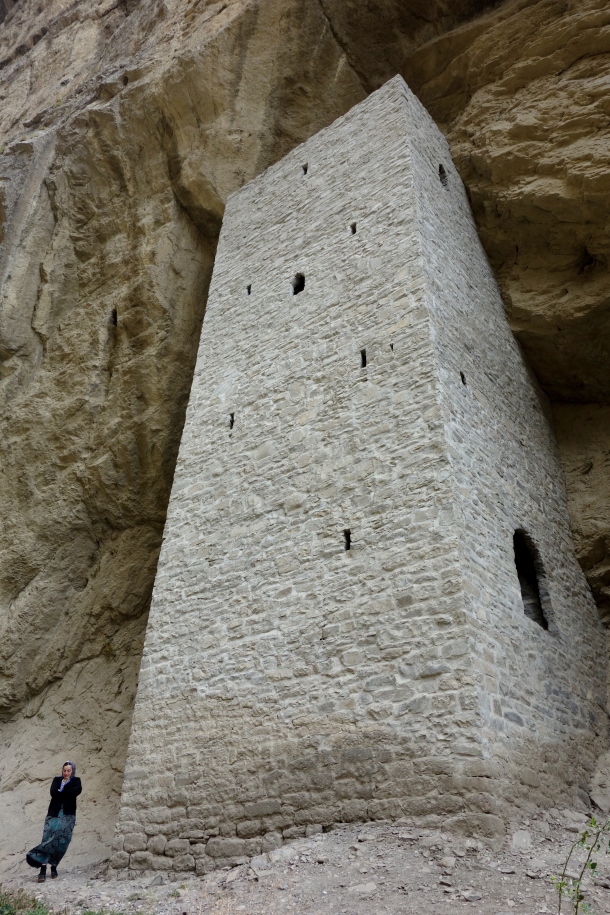 A relatively short distance past Ushkaloy is the mountain town of Itum-Kale: 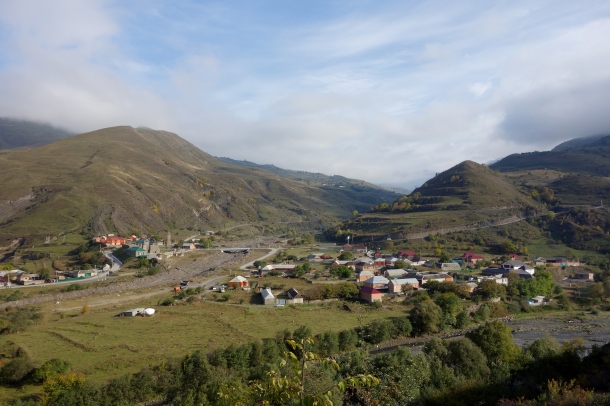 Itum-Kale was connected to a political leader – Hussein Isaev – who was chairman of the Chechen State Council and had the misfortune of being seated next to Akhmad Kadyrov, the President of Chechnya, at a parade on May 9, 2004 when the powerful explosion from a carefully placed bomb (see the remarkable video of the assassination here) killed Kadyrov and everyone around him.

In furtherance of the narrative of Chechnya’s political leaders of the time as hero martyrs, Itum-Kale has been carefully rebuilt and is now home to a small, but quite good, museum called the Husein Isaev Museum Of Local History. This is the museum below:

Inside, is an excellent collection of Chechen artifacts and several rooms that have been recreated to show what life was like in the past for the Chechen highlanders.

There is also a small section of the museum dedicated to Husein Isaev. There is a recreation of his office (you’ll recall from the Akhmad Kadyrov Museum how trendy it is right now to recreate the offices of Chechnya’s late political leaders), but also the more macabre display below that contains the damaged suit that Husein Isaev was wearing when he was killed: 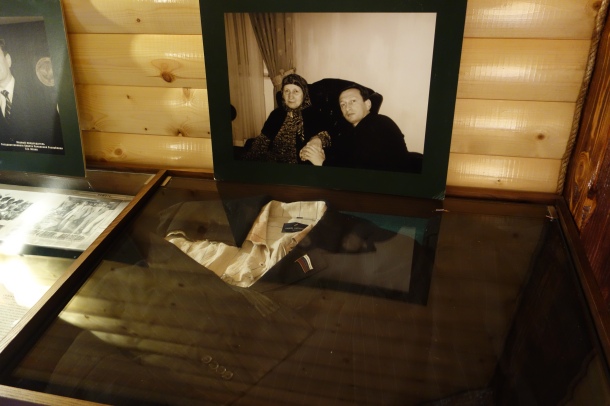 Farther up the road is Tazbichi, which served as an excellent stop for a late picnic lunch:

We climbed to the top of the tower and below is a picture of the surrounding village… It is very representative of a Chechen mountain town:

This was the end of the line on this route as any farther up the road would have taken us to the Georgian border, which given the present hostile relationship between Russia and Georgia, remains closed here.

4 thoughts on “The Mountains Of Chechnya”