How about those names? I was told that it is also sometimes called Bramdungjung.

As impressive as I found the Tawang Monastery to be, I was actually more taken with the small Buddhist nunnery that I shall profile below. The Ani Gompa (Let’s call it that for the sake of expediency) lies several miles farther up the mountains from the Tawang Monastery. And actually, if you look closely in the second picture of the post on the Tawang Monastery, you can just make out the nunnery.

Even more remote and less visited than the Tawang Monastery, the Ani Gompa, founded in 1816, has a special feel to it. Part of that is undoubtedly due to the drive up to Ani Gompa which is an experience in itself.

Even the locals come up to enjoy the views:

The first view of Brahma Dung Chung Ani Gompa… Okay, I used the full name again, but I like the way it just rolls off the tongue, you know? 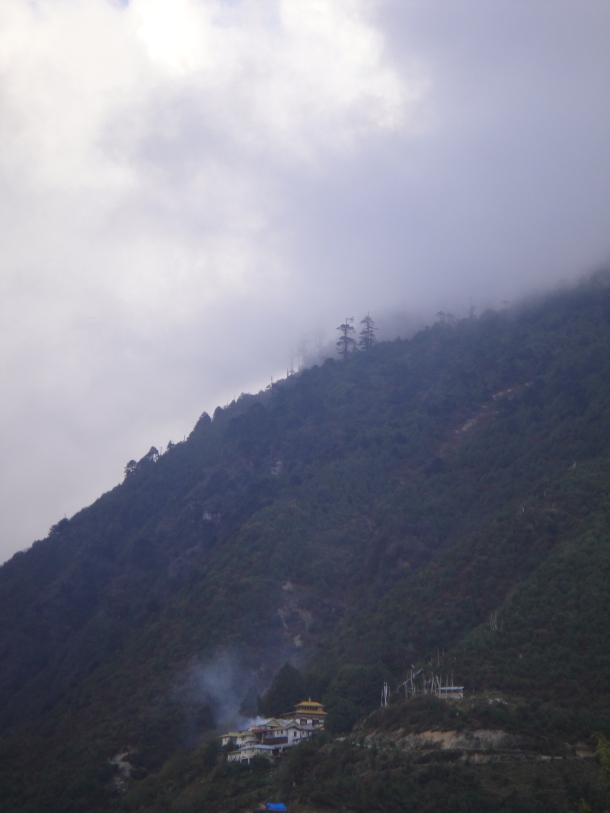 The very first thing I saw when we pulled up to the nunnery was this nun pounding grain into a more easily processed consistency. I thought it was quite an image and the impression stuck with me for the duration of our visit: 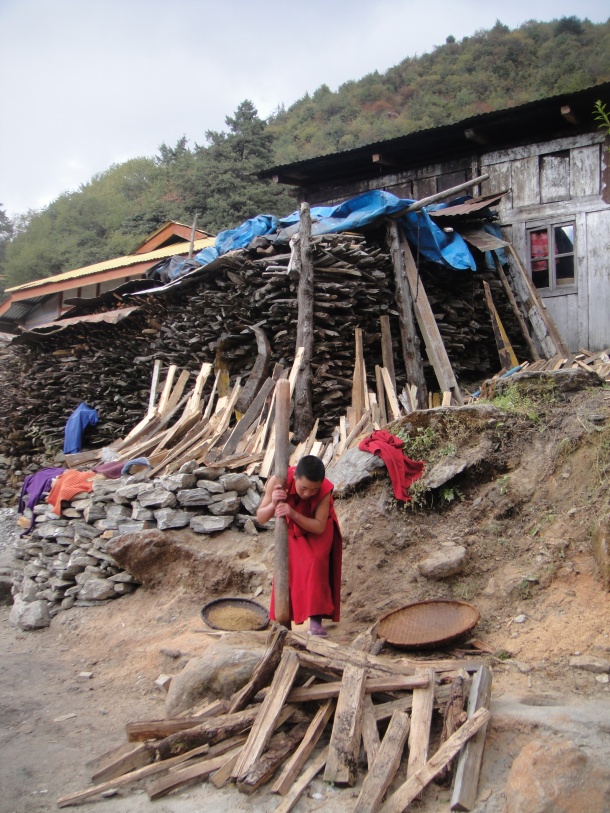 This picture taken from the entrance walkway provides a better view of Ani Gompa. As you can see, it is much smaller than the Tawang Monastery: 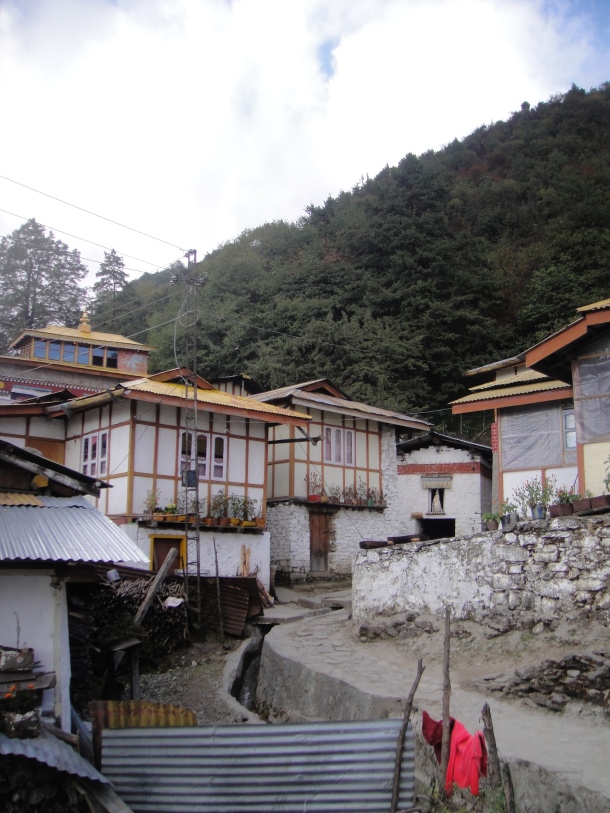 Our arrival was timed well as a significant Buddhist figure was visiting the nunnery when we arrived. I’m afraid I didn’t write the names down, so I’ll have to explain it to you without using the terminology… In Buddhism once someone achieves enlightenment they have the opportunity to enter the Buddhist equivalent of Heaven. However, some of these individuals that have achieved enlightenment essentially martyr themselves and opt to return to Earth to assist others with achieving enlightenment. I am not sure how it is determined that these figures made that choice, but they are very highly regarded by Buddhists. And one of them just happened to be visiting when we arrived. He is seated in the middle of the group located in front of the prayer hall: 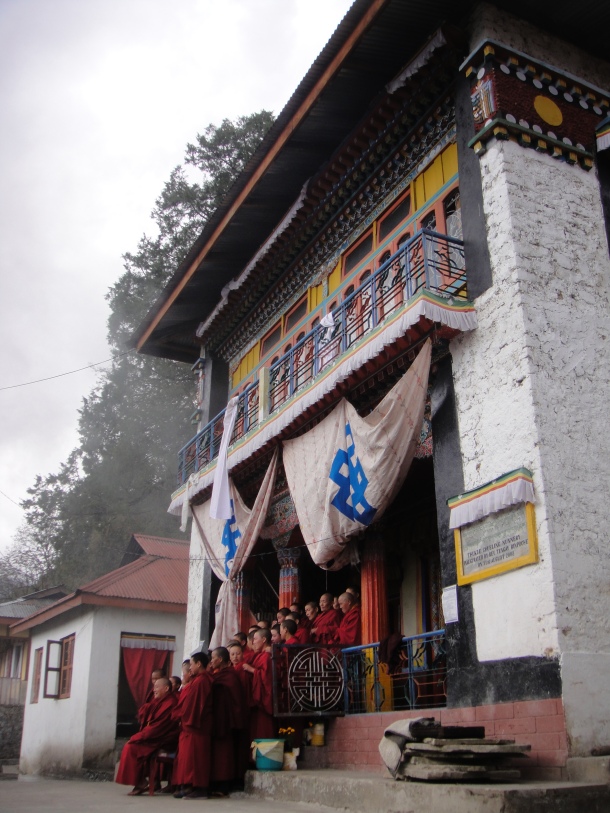 After several more minutes, the group broke up and returned to their daily tasks: 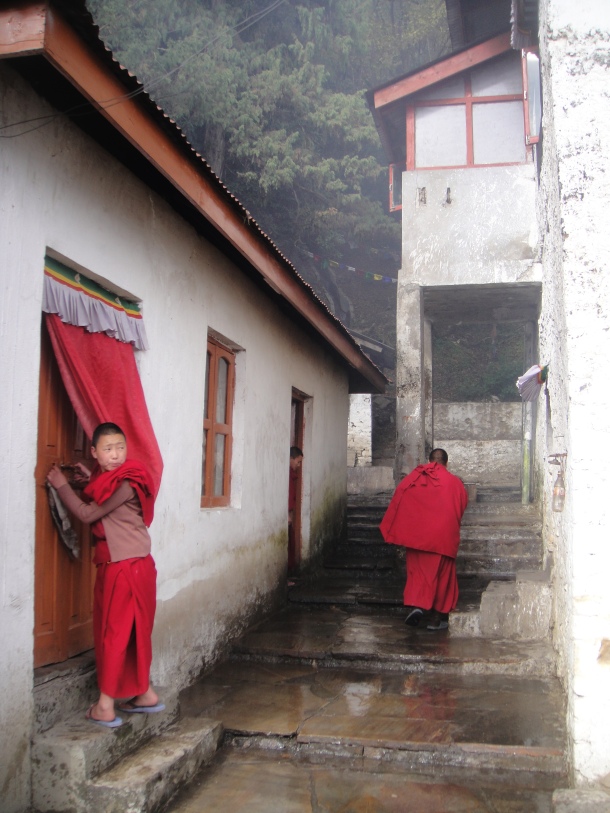 Daily tasks such as scrubbing the courtyard: 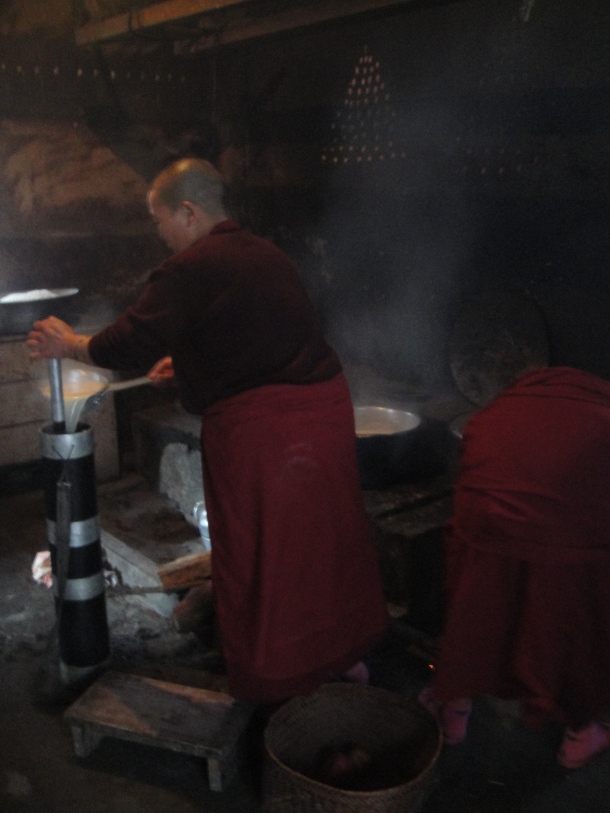 However, a group of monks that accompanied the enlightened martyr (I don’t know what else to call him) stuck around and led a prayer and meditation session within the prayer hall:

Here’s a video I took of them playing some of the musical instruments:

After our visit to the prayer hall, we were served yak butter tea and were given the opportunity to see the living quarters of the nuns. Such as this bedroom:

The smoke in the outdoor pictures you saw above is coming from fresh incense cedar being burned. It is quite a pleasant fragrance and added to the overall positive ambiance of Ani Gompa:

This small building behind the prayer hall collects water running down off of the mountain from a spring:

One of the shy, but very friendly nuns of Ani Gompa:

It is a common practice for families to send one child in each generation to become a Buddhist monk or nun. However, the tiny donations received by the nuns are usually insufficient for feeding, clothing, housing and educating these children (not to mention the adults). Thus, the nuns must often work in the fields owned by the villagers in exchange for corn, wheat and other basic goods. It can be a hard life.