Addis Ababa, as Africa’s fourth-largest city, is massive and incoherent. It’s probably easiest when broken down into districts and neighborhoods and I have divided some posts up by district – such as the Merkato or Meskal Square – to reflect this reality. However, this post is about the areas of Addis Ababa that can’t be conveniently tucked into a particular district or neighborhood. 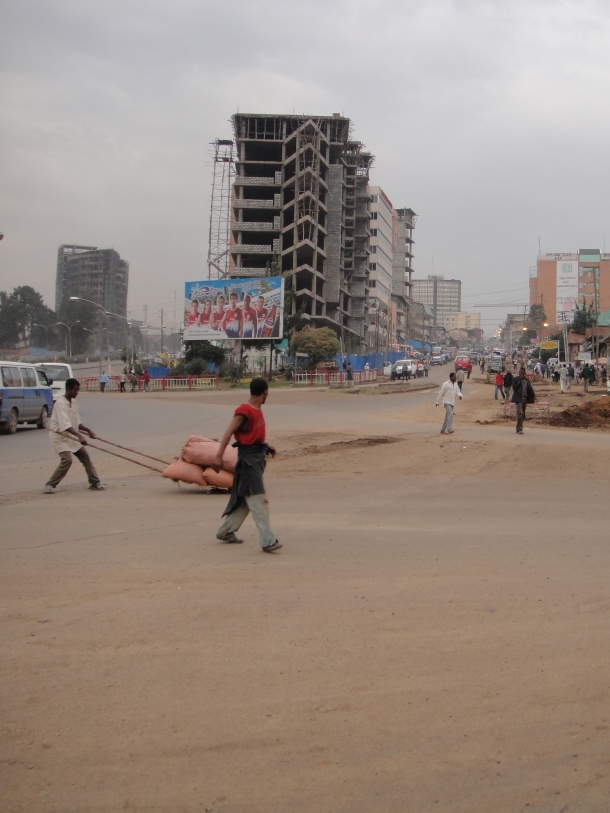 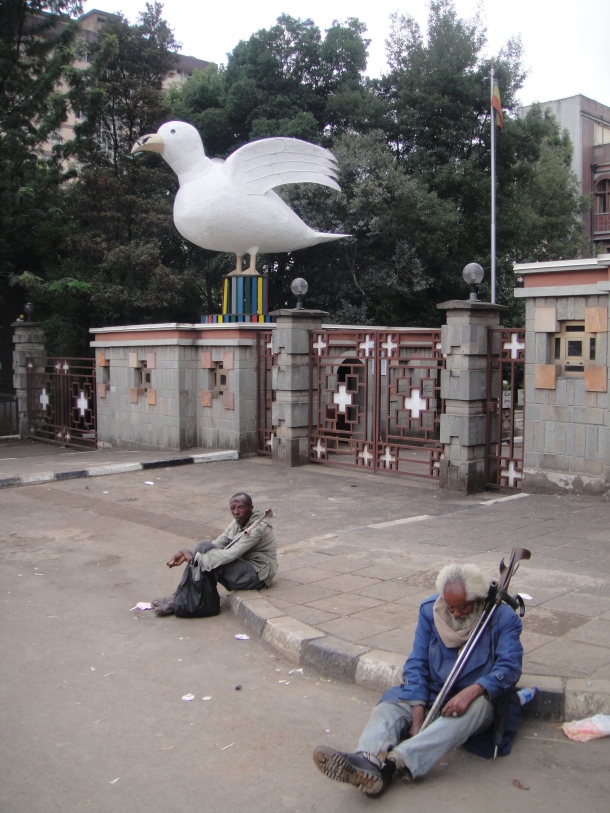 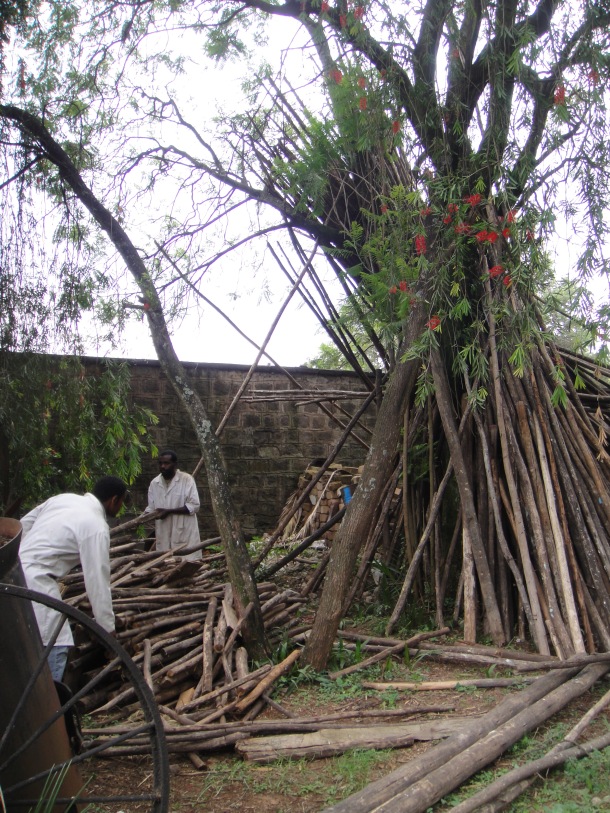 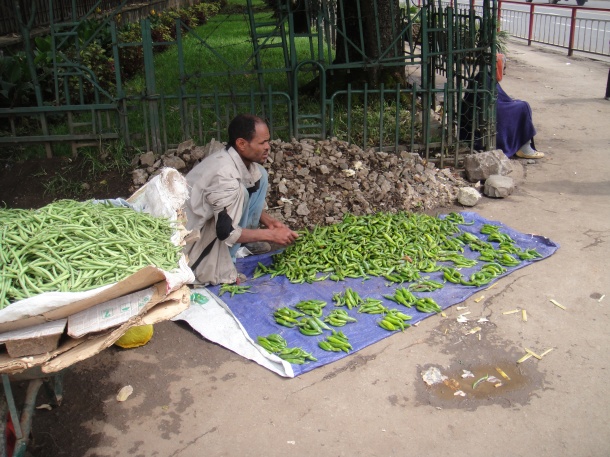 Despite being a predominantly Orthodox Christian country, Ethiopia does have its share of mosques: 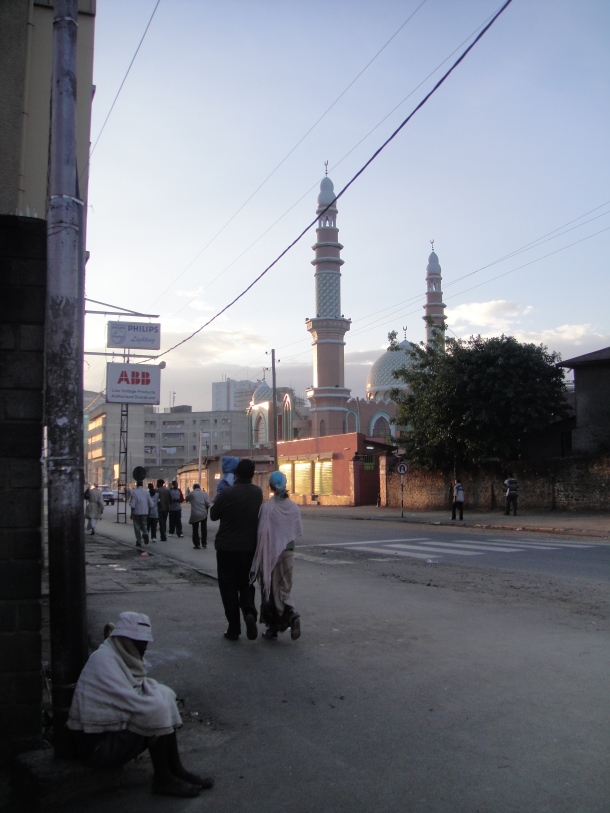 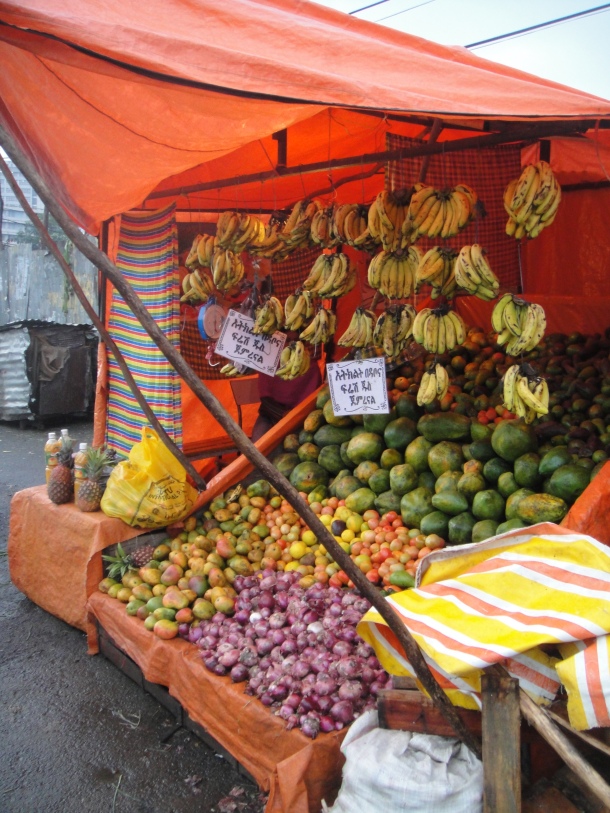 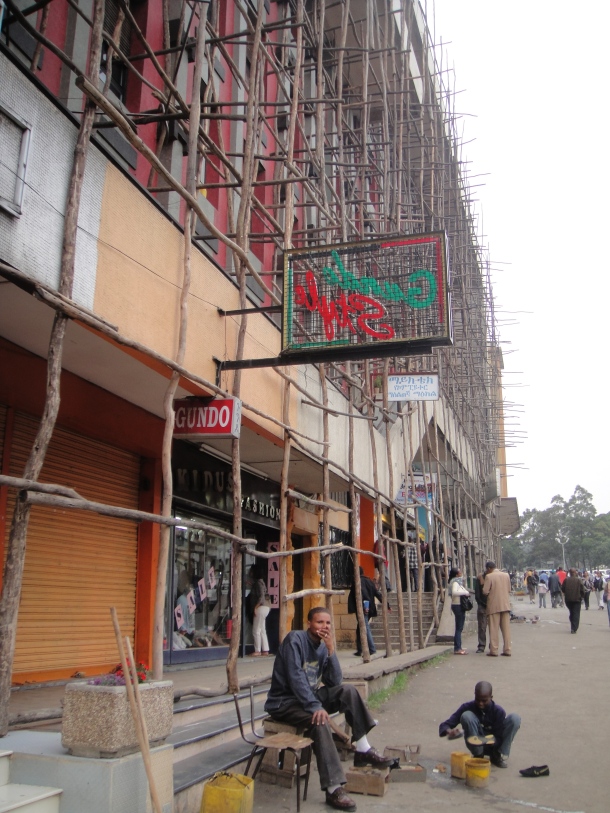 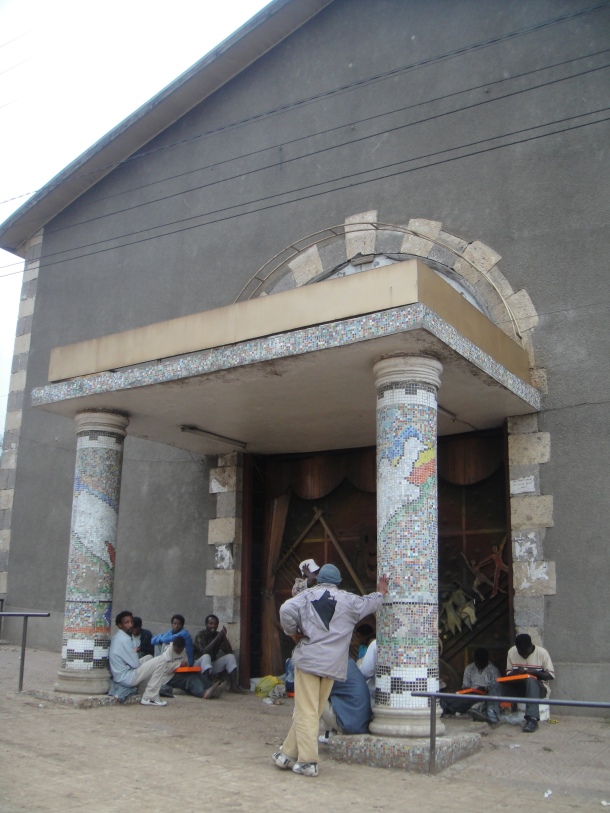 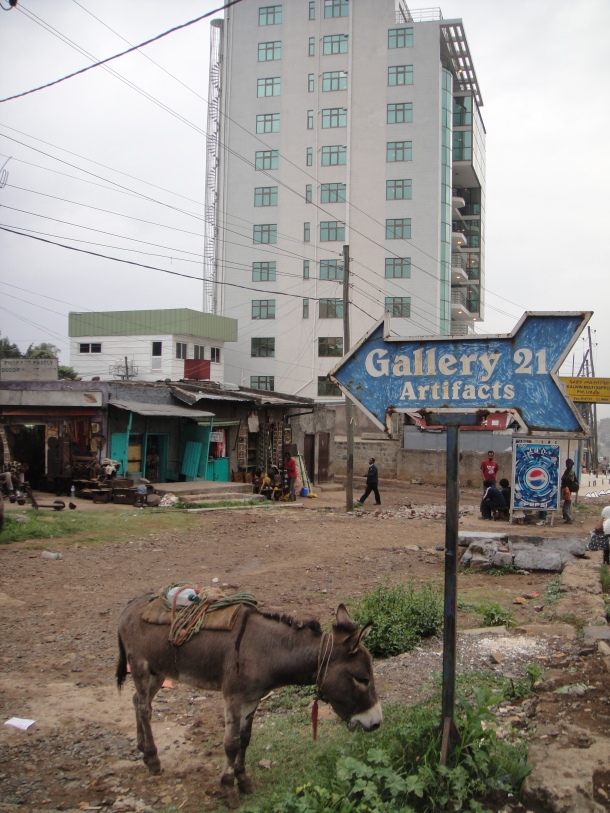 Roadwork in Addis Ababa – they were working a lot harder than CalTrans does: 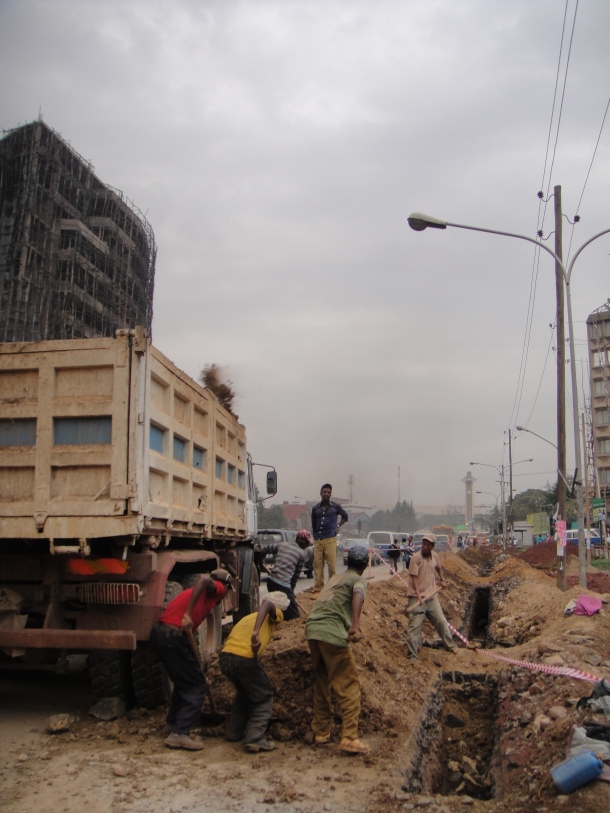 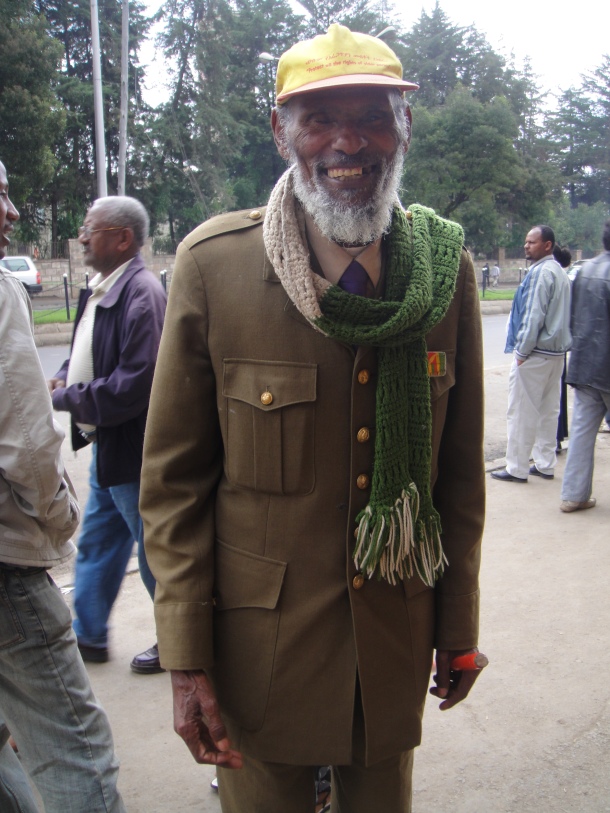 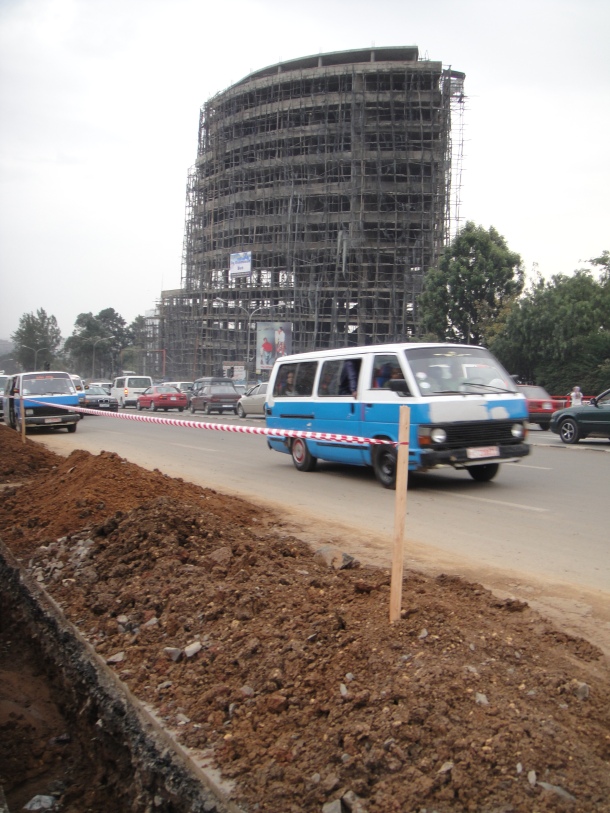 Long the symbol of Ethiopia’s monarchy, the Lion of Judah is ubiquitous throughout the country. Although images of the almighty animal abound in Addis Ababa, it’s the storied history of the Lion of Judah Monument that makes this statue noteworthy.

After being erected on the eve of Haile Selassie’s coronation in 1930, it was looted by the Italians in 1935 and placed in Rome next to the massive Vittorio Emanuelle Monument. In 1938, during anniversary celebrations of the proclamation of the Italian Empire, Zerai Deress, a young Eritrean, spotted the statue and defiantly interrupted the proceedings to kneel and pray before it. After police verbally and then physically attempted to halt his prayers, he rose and attacked the armed Italians with his sword while screaming, “The Lion of Judah is avenged!” He seriously injured several officers (some reports say he killed five) before he was shot. Although he died seven years later in an Italian prison, his legend lives on in Ethiopia and Eritrea.

The Lion of Judah Monument was eventually returned to Addis Ababa in the 1960s: 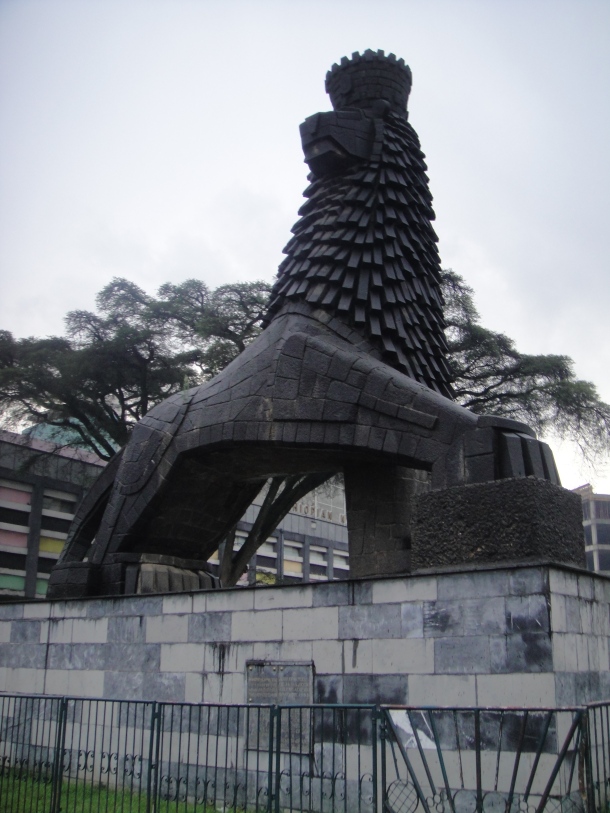 There is a cluster of newspaper vendors in this part of the city and many residents congregate here, reading their freshly purchased newspapers. It’s social because it is a group activity, but at the same time it is anti-social because everyone is in their own world reading their respective newspapers: 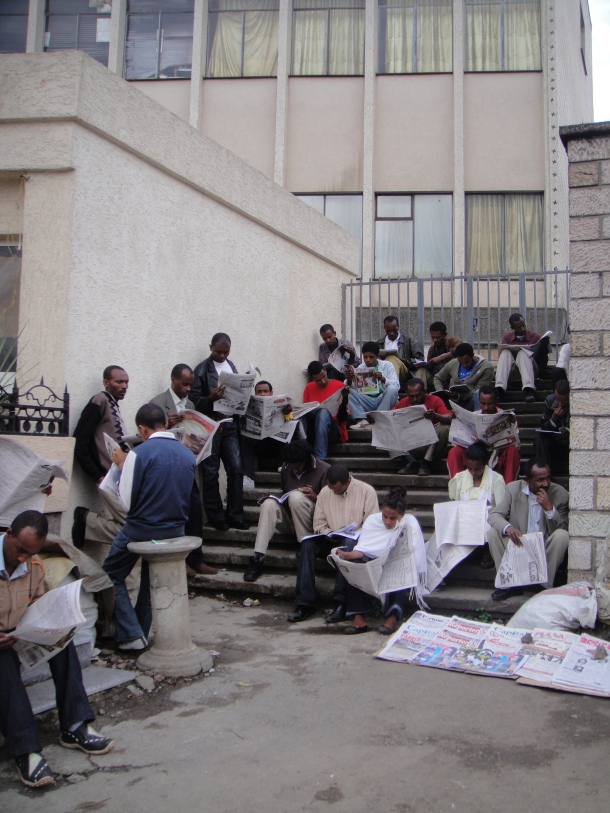 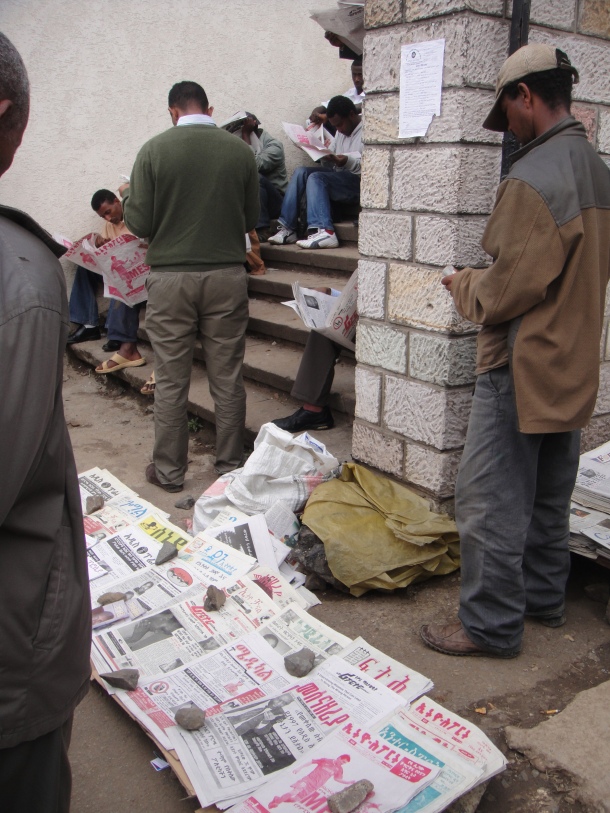 Phone trees… I hadn’t seen those in a while: 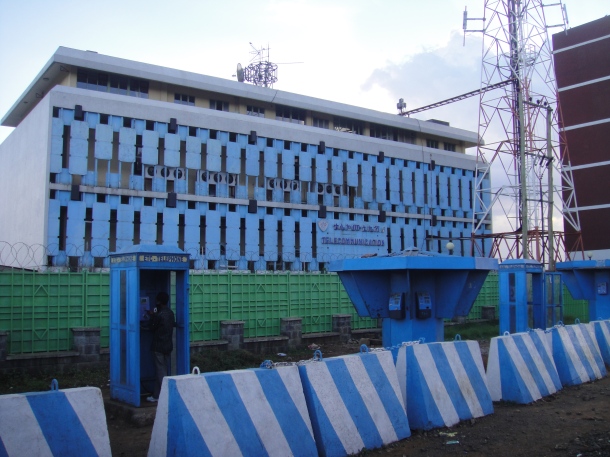 A livestock market in Addis Ababa: 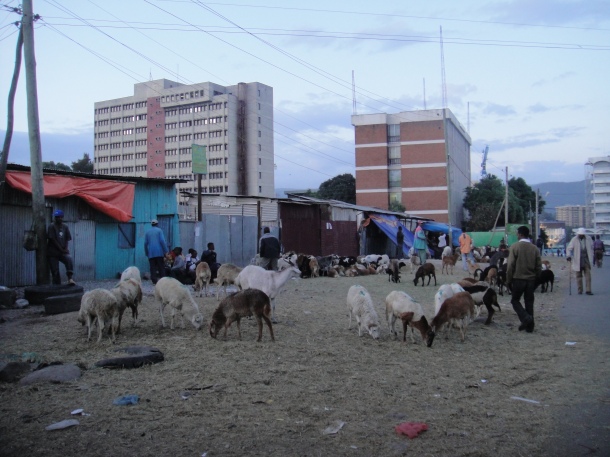 Ethiopians take their religion seriously and, as such, there are churches everywhere: 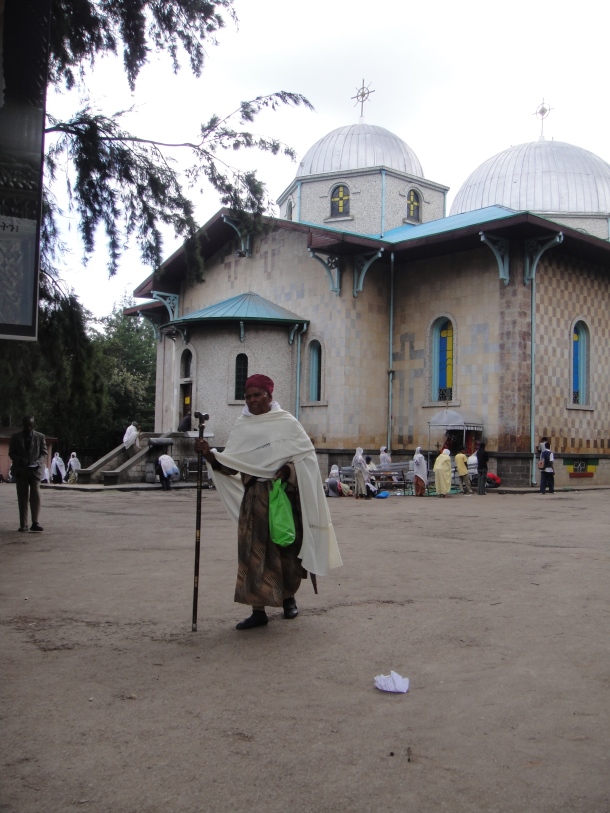 Some of the varying homes across Addis Ababa: 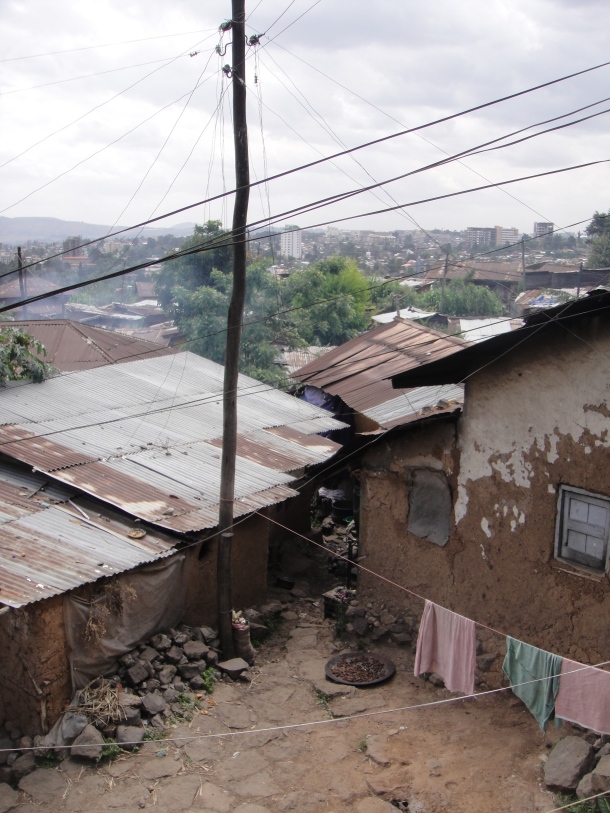 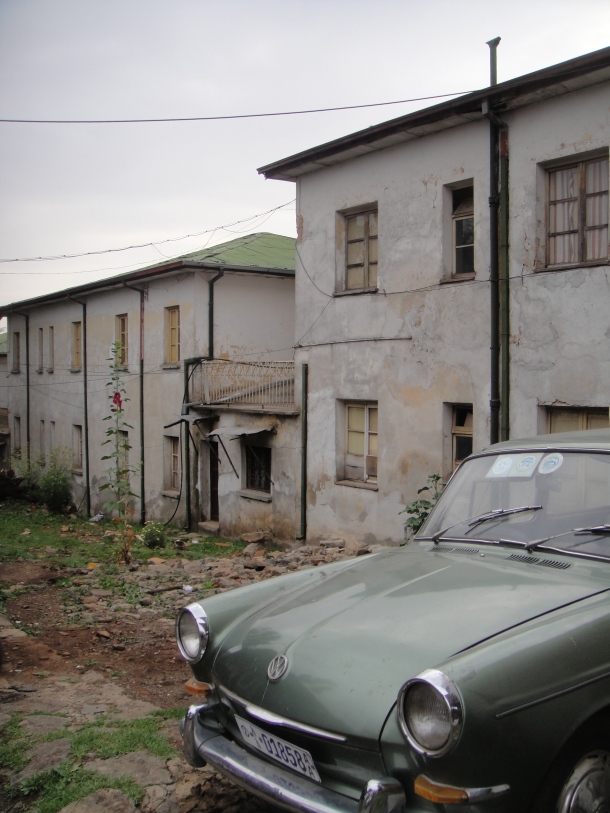 This home could probably be had cheaply – it’s slowly collapsing into a ravine: 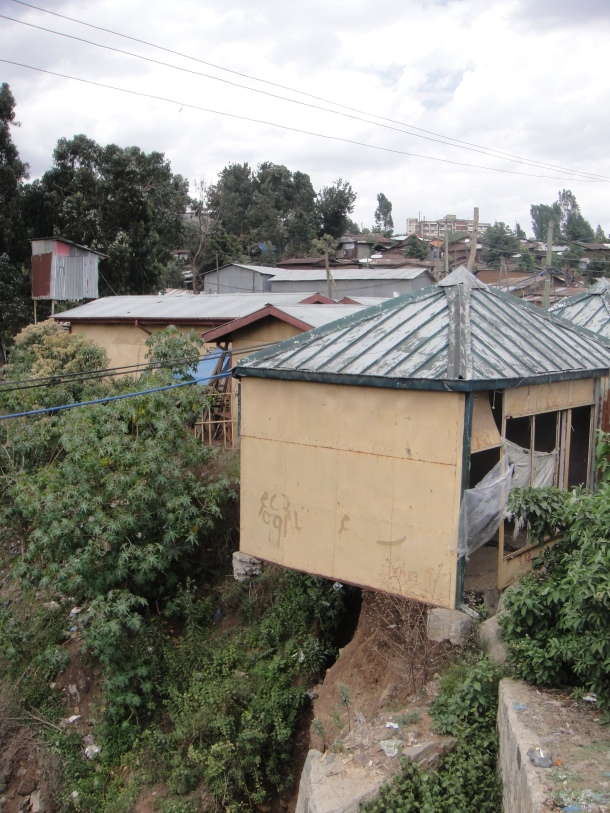 These guys had an interesting business – decorating coffins: 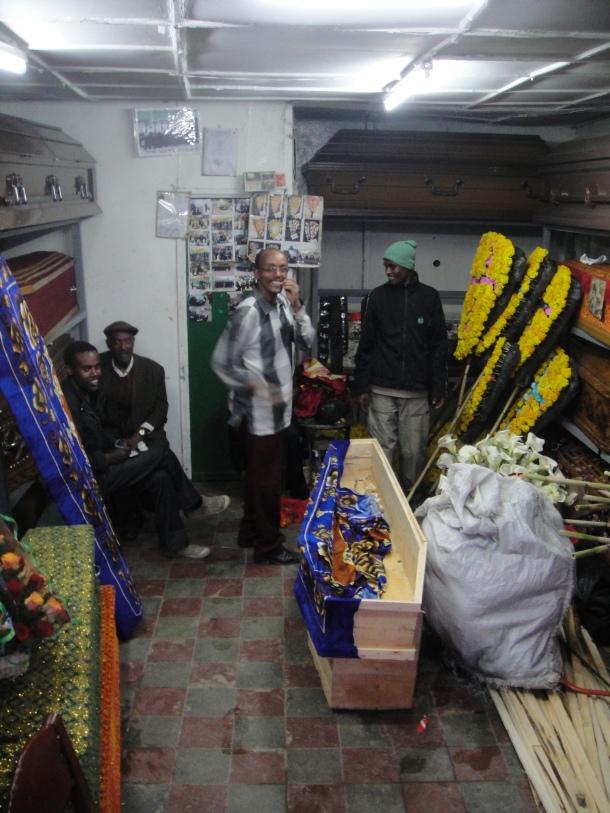 And as long as we’re on the topic of death… Nothing in the capital is as poignant a reminder of the country’s painful communist rule as the towering Derg Monument. Topped by a massive red star and emblazoned with a golden hammer and sickle, the cement obelisk-like structure climbs skyward in front of Black Lion Hospital: 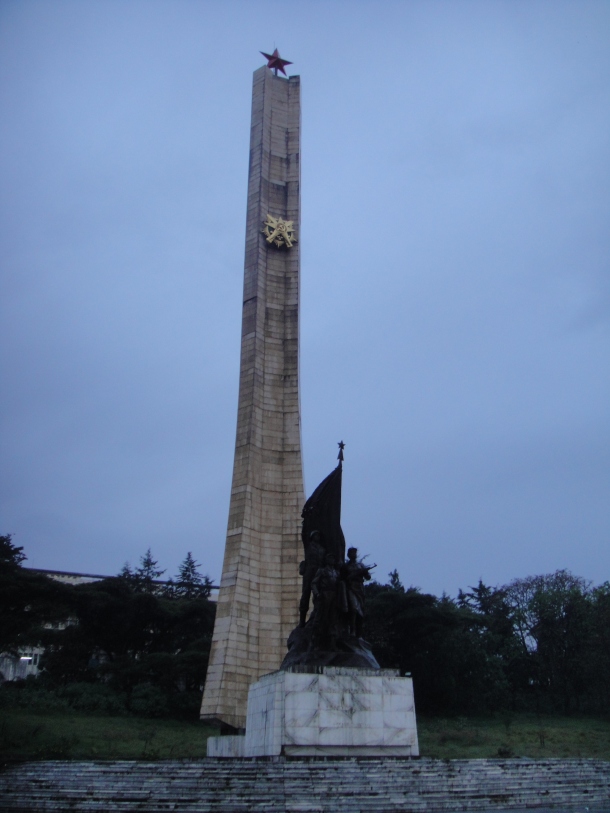 This being Africa, poverty is a constant presence: 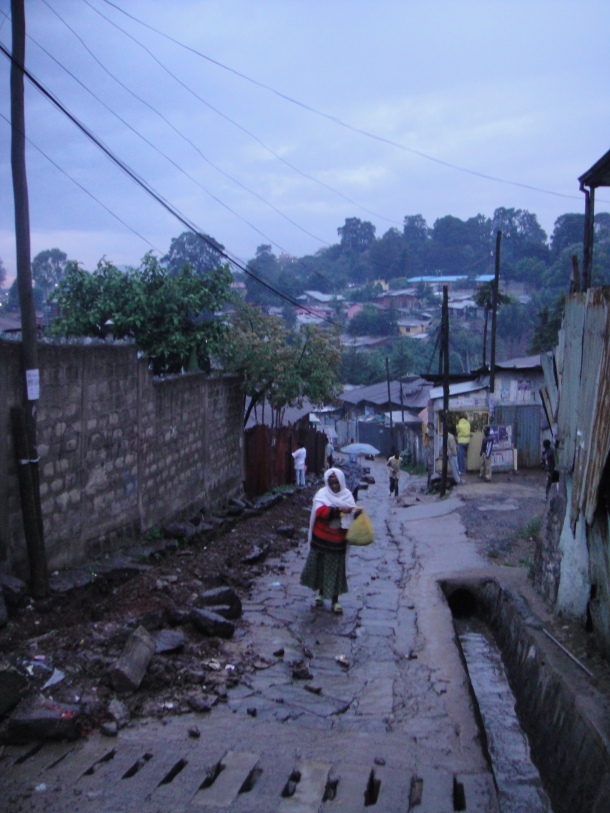 Sleeping in the street: 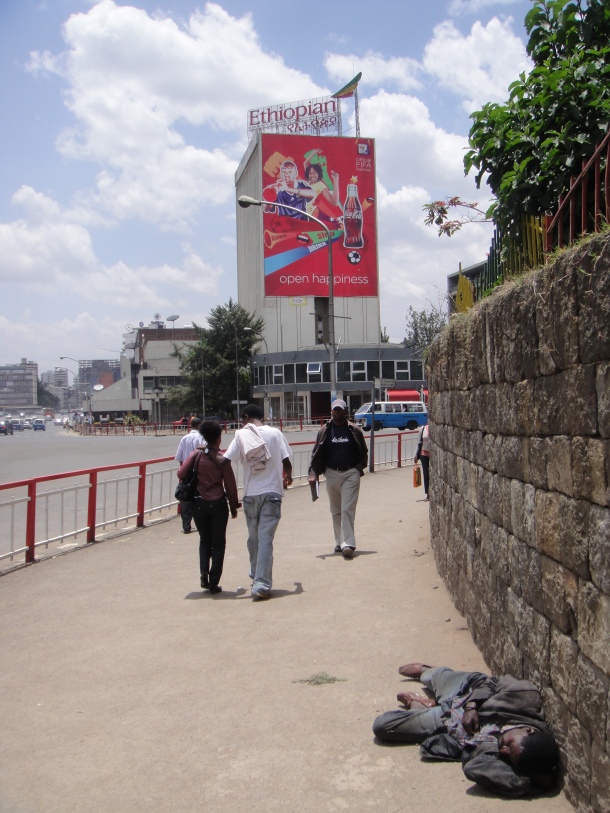 Shitting in the street (well, next to it anyway): 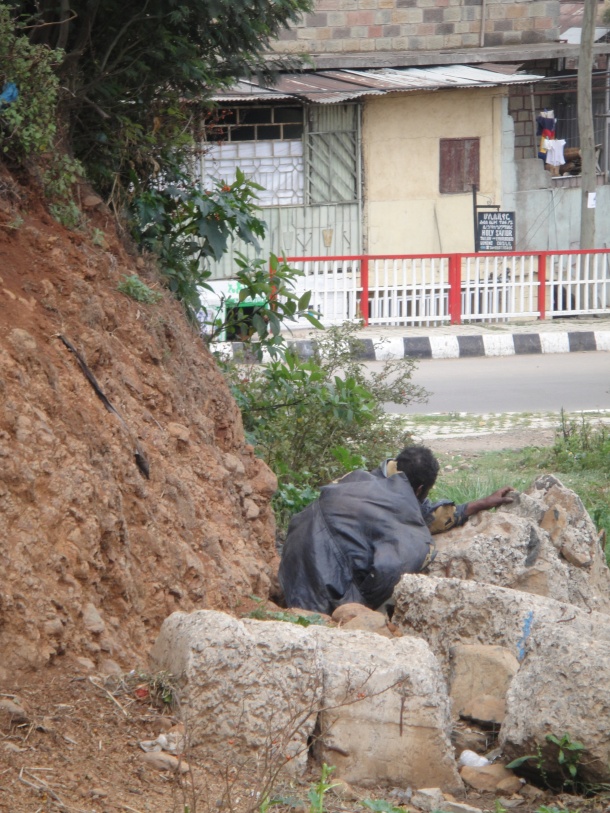 Washing himself and his clothing in one of the extremely polluted ravines that runs through the city: 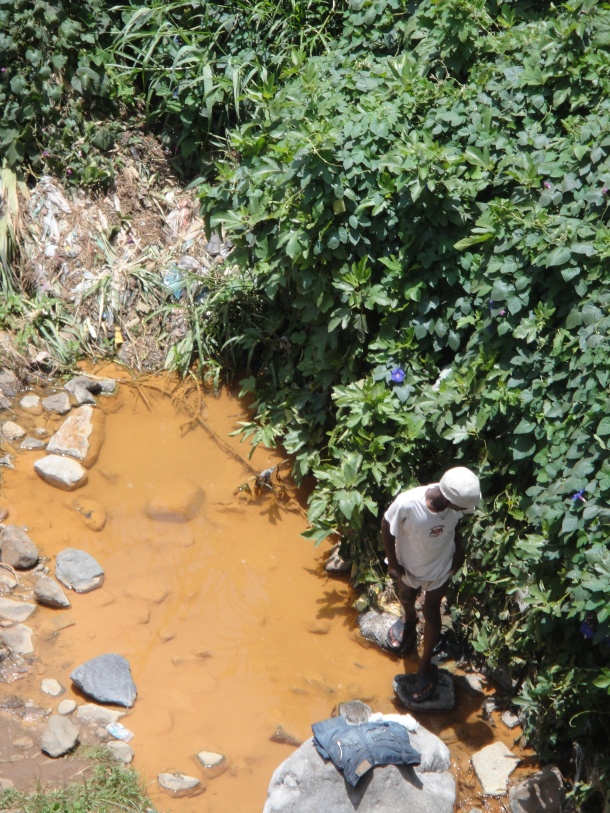 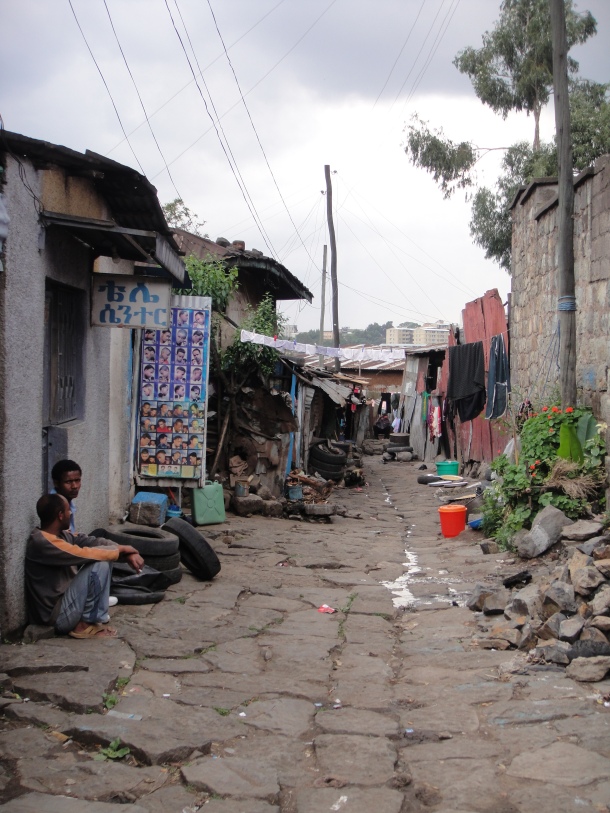 One of the polluted rivers of Addis Ababa: 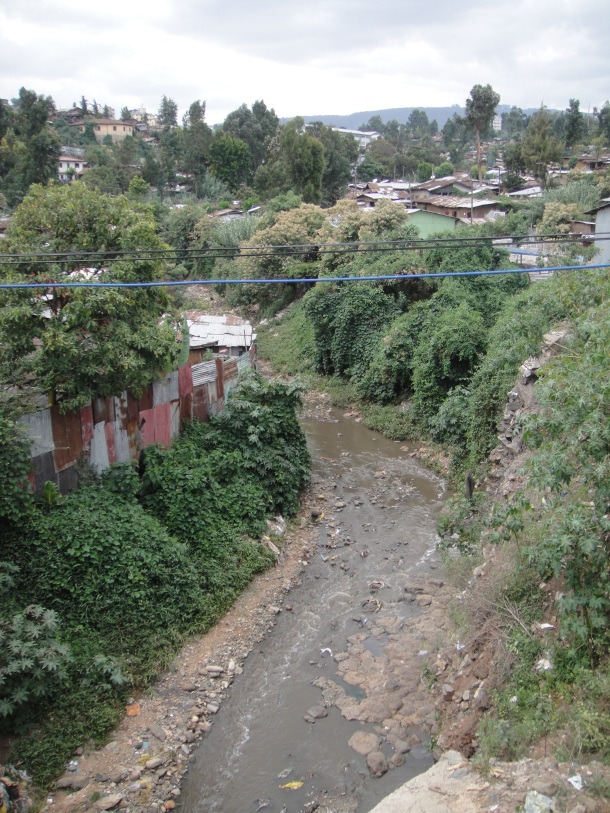 And the trash flowing into it: 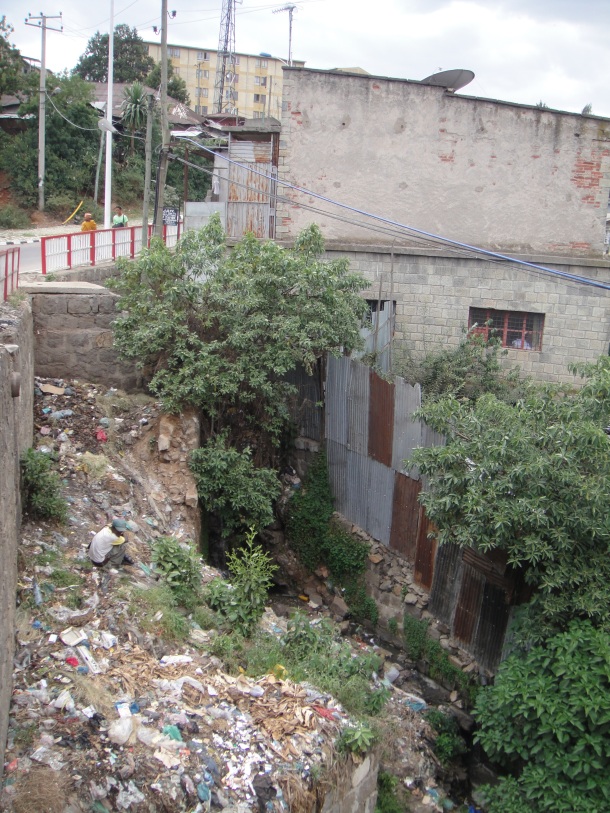