For those of you that don’t know, the Maidu were a Native American tribe that once occupied an area encompassing Oregon House…

Maidu communities varied with the topography. In the foothills, the Feather, American, Yuba and other smaller streams flow through deep narrow canyons. Permanent settlements were usually on the ridges that separate the parallel streams. Minor features of topography seemed to have determined the particular site choices. For the foothill Maidu, a spring, a clearing, a level southwestern exposure, or any other essential varying features was the deciding consideration (on the Ames estate, the Maidu sites cover all three of the above).

All pictures below were taken on various parts of the Ames estate: 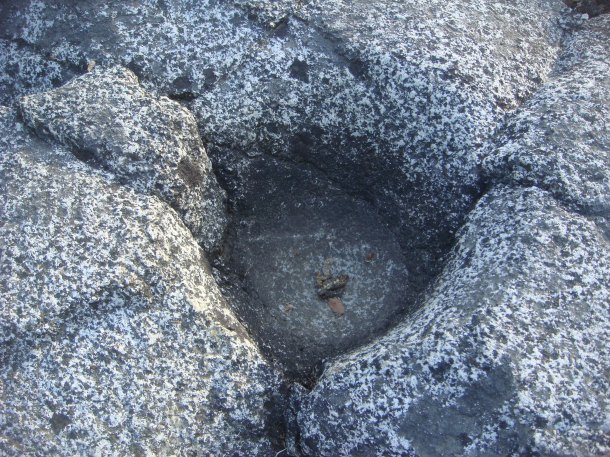 The valley Maidu traded with the Wintun (another Native American tribe). Beads were used as money. Beads came in tens and were always handled on strings. From the valley and hills the beads flowed into the high Sierra, often traded for salmon, salt, nuts, bows and arrows, deerskins and wild tobacco.

The list of animals not considered food by the Maidu was small. Dog was the most taboo animal, regarded as poisonous. Also, the buzzard and all reptiles were avoided. Invertebrates, high in protein, were freely eaten; worms, larva of yellow jackets and other insects, grasshoppers, crickets, locusts and fresh water mussels were considered delicacies. Deer were hunted in companies of men (They were driven over cliffs). Before the hunt, prayers and magical observances, and strict taboos were enforced for the families of the hunters. These people were very religious and into shamanism. There was a ceremony for everything; a change in seasons, animal sacrifice, sickness, new life and death.

Traces of the Maidu are all around us. Rocks used as grinding stones (for processing acorns) are scattered across the Ames estate. I find it thought-provoking to be occupying land and “owning” land as a direct beneficiary of an ethnic cleansing campaign carried out approximately 150 years ago.

Now, for the record, no ancestors of mine participated in this ethnic cleansing process and, in fact, my ancestors have always fought on the “right” side of any war America was involved in from the Civil War to World War II. However, that does not alter the fact that we, and actually anyone in America, have benefited from an ethnic cleansing campaign.

Am I apologizing? No. Am I fomenting for reparations or land reform? No. Such is the way of the world. The powerful abuse those weaker than them and the Maidu probably pushed some other weaker group out before them.

I just find it thought-provoking to run my hands over rocks that were shaped by humans hundred or thousands of years ago and to be occupying land once occupied by them.

As Buddha said, “Transiency is inherent in component things.”

One thought on “The Maidu”