Trying to stop a speeding express train by willpower and luck alone can be hazardous business. This is true in both the literal and metaphorical sense.

In baccarat, there are only three possible outcomes. Either the player wins, the banker wins or there is a tie (Ties are infrequent in baccarat and have poor odds, so it is best to ignore them and keep things simple: banker or player). So, really, it is like flipping a coin or betting on black or red with roulette. 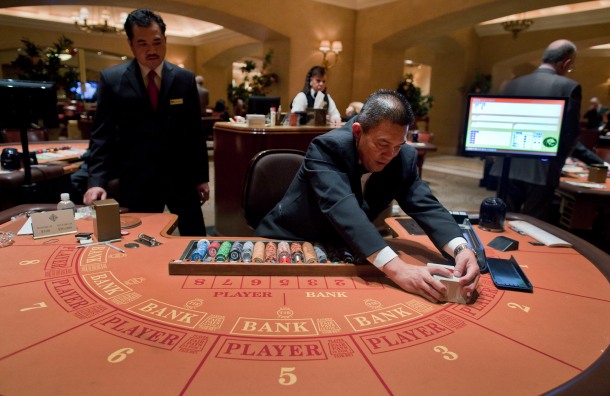 On the screen mentioned above, the banker will usually be represented by a red dot and the player by a blue dot. When the player or banker goes on a streak, you will see a long string of connected blue or red dots. This is what they call a “train”.

The good friend I go with, Frank, likes to get on the trains. In other words, if he sees a trend going, he will get on it and keep betting it. The twist is that every time he wins, he takes his new winnings off the table and just keeps his original bet down on the table. So, if he bets $5 on the banker and the banker wins, he will win $5. Then, he takes $5 off the table and keeps $5 on. If the trend continues, he keeps another $5 and on and on until the trend is broken. Alternatively, if he loses the next round, he is just back to even because he already took $5 in new money off of the table. So, Frank likes to ride the trains.

My style has been different (I am still evolving as a player). As with investing, I lean toward contrarianism. Therefore, I am inclined to try to get in front of the speeding trains and stop them. If I see a train developing, I will often get in front of it and try to call when the trend will break.

In other words, if I see that “player” has won four times in a row, I would make a bet on “banker”. Of course, the result is random and so it does not matter what the prior results have been. As they say, the table has no memory. So, what I am betting on is mean reversion. Logically, over the course of play, one should expect to see a roughly equivalent number of player wins versus banker wins. So, if I see a long train of player wins or I see that player has been winning 75% of the hands, I will start betting on banker on the expectation that mean reversion will bring the percentages back closer to 50/50.

Last night I got run over by two trains. The first train I tried to stop or step in front of was after 6 player wins in a row and this was in the context of a record over this round of play so far that had been close to 80% player wins. Time for a mean reversion to banker, no? Player went on to win 14 times in a row!!!!  Even the dealer was surprised by the player run and, naturally, I got ground into a pulp under the merciless steel wheels of that train.

Now, before I go into the casino – and any professional will support this approach – I establish exactly how much I am willing to lose that night. If I lose that much, I am done for the night. I do not go rushing over to the ATM machine to run up my credit card or to start gambling with my Roth IRA contribution.

After getting run over by the train I described above, I got stopped out of the chips I had on hand and backed out. The very next hand, the trend went over to banker as I expected and proceeded on an almost equally epic banker run. Frank would have made a killing on those two if he had not been off playing at another table.

The night before, I had done quite well with my “anti-trend” strategy that I described above. Since I was still playing with the casino’s money for the week, I decided to put the rest of my winnings from the night before to work. After all, there is no way that I would observe another epic run such as had led me to the slaughter described above, right? My mean reversion strategy started bearing fruit again. I recouped 40% of my losses when suddenly another epic train started up. Lightning sometimes does strike twice in the same spot. Well, sort of. This time it was a banker train and for twelve straight hands the banker won. I was out of chips before the trend fully played out and my night was over. So, last night the casino got the money back that I had taken off of them the night before.

Now, what could I (or should I) have done differently?

There are a couple of possibilities…

Frank’s policy is that if he is even or losing for the night, he will stop betting after two losses in a row. If he is ahead (and therefore playing with the casino’s money), he will stop after three losses in a row. This keeps one from being slowly ground into a bloody, red mess by an unexpectedly long train as I was.

Another option is to keep doubling down until the trend does finally go your way. This is known as the Martingale system.  However, this strategy can go to extremes. Consider the consequences of doubling down on a $5 bet and hitting the 14 car train that wiped me out the first time last night.

How often do you get 14 hands with the same result? Not often. But, it does happen. Do you have $40,000 or more in chips to see a trend through? Probably not, unless you are the proverbial “whale” that the casinos so aggressively seek out. The whale has the same problem though. Suppose a whale puts down an opening bet of $15,000. Double that out 14 times and even most whales will run out of money. And there’s another issue – will the table limits let you keep playing long enough for you to get your money back? Suppose the table has a $5000 limit… Following the example above, you just lost $5000 before the train stopped and you are unable to see this trend through to recover your losses.

The Importance Of Venue

Many casinos have a $25 minimum bet on baccarat. However, I don’t like that. I believe one has more flexibility and less pressure with $5 minimums. Therefore, I prefer sleazy, rundown casinos in bad neighborhoods. If I am the only white guy in a place, then I know I am on to a good location.

You want a place like this (minus the white guys): 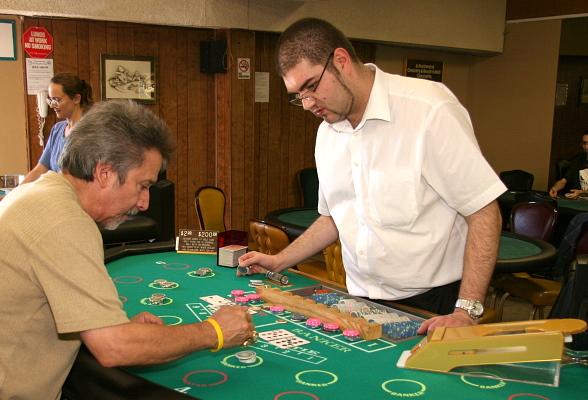 Asian communities are a great place to find such establishments. The recklessness with which some of the Asian gamblers play and the dollar amounts that they win and lose (more often lose) can be fun to watch. My friend Frank, who is Vietnamese, explained that many of the fellow Asians in there with us are people he has seen countless times at other casinos in the area. He knows many of their stories and they are often first generation immigrants and frequently work at nail salons or massage parlors or as waitresses or auto mechanics. They are paid in cash at these jobs and this cash income does not get reported. Therefore, they are also able to collect welfare payments and food stamps to help them get by. It is the money from the welfare checks that they are in the casinos gambling away. Thus, taxpayer dollars have built many a casino across this nation of ours.

Obviously, the proceeding profile is a generalization and not all Asian or Vietnamese gamblers fit that profile, but a surprising number do. And where you see those players is where you want to be. Those are the sorts of places you want to be in. Places where you can smell the greed and desperation in the air. Places where you have low minimums and reckless, undisciplined gamblers. Discipline and conservative play will provide any gambler an edge in this environment.

Last night, Lady Luck reminded me that there are no sure things in life and she threw in a lesson about trains.

However, I do believe that prudent money management and mean reversion can equal a winning combination for a baccarat player. Don’t look for the home runs, but conservative play can add some extra income to your day job.

Watch out for trains though…

4 thoughts on “Strategies In Baccarat: Watch For Trains”