Stretching more than 800 miles from Kashgar in China’s western Xinjiang region to Abbottabad in Pakistan, the Karakoram Highway is the world’s highest transnational roadway and a testament to modern China’s determination to shape and contain nature’s most daunting obstacles. Completed in 1979, the roadway’s official objective was to foster trade between Beijing and Karachi, but, unofficially, it was also to sweeten a marriage between two allies united in their enmity for India.

Since 1986, when it was opened to the public, the highway has provided access to a mesmerizing slice of Chinese Central Asia, a high-altitude melting pot of seminomadic tribes who share a landscape of harsh but breathtaking beauty.

Thus, it should not shock our dear readers that The Velvet Rocket staff felt that no visit to Xinjiang would be complete without a run south down the Karakoram Highway (also known simply as “the KKH”) toward Tajikistan and Pakistan…

The map below shows the route:

Accompanied by our Uighur fixer and a Uighur driver, we started our little expedition on the KKH from Kashgar.

…we stopped for provisions in Upal, a dusty agricultural town that is as authentically Uighur as one could hope for; few people here speak fluent Mandarin, and the town and surrounding countryside have a timeless feel that highlights the challenges Beijing faces as it tries to shove Xinjiang into its idealized vision of a harmonious Greater China:

The residents have a deep connection to their history and are swift to mention the region’s associations with Marco Polo, whose epic 13th-century journey from the Republic of Venice to the Mongol-ruled imperial capital in Peking is said to have taken him along a route that follows the modern-day Karakoram Highway.

The explorer certainly left his mark here, with the people of Upal insisting that the origins of spaghetti can be traced back to the thick, chewy lahman noodles that are a staple of Uighur cuisine. One old man pulling noodles at a roadside stand boasted to us (interpreted through our Uighur fixer), “Italians think they invented pasta but they are mistaken.”

Italians are very proud people, particularly when it comes to their food. As such, my Italian interpreter was not particularly enthused about that claim… Naturally, I spent a good deal of time following that conversation insisting to her that it must be true and that the Italians had simply copied the Uighurs.

Beyond Upal, the well-irrigated farms quickly give way to the parched foothills of the Kunlun Mountains… 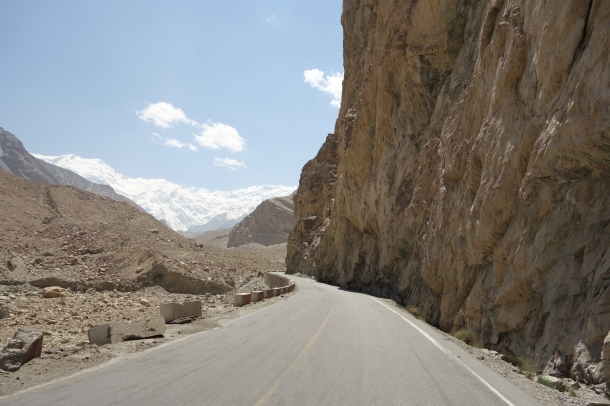 …and later, a deep river valley tracing the Gez River:

For hours, as the highway climbs higher, there is little sign of human habitation: 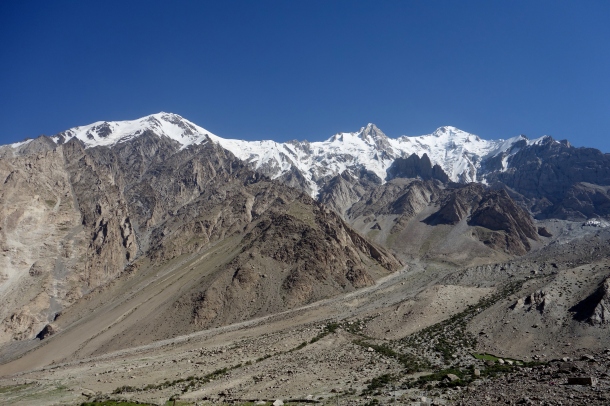 I did some research on the mountains in this area after our return and discovered that some of these peaks have only been summited once or twice:

More than 1,000 lives were lost during the two decades it took to blast and bulldoze out the highway from the glacial rivers and dizzying escarpments… Given its dramatic elevation and the nearly impossible conditions in which it was carved out, the Karakoram Highway is sometimes referred to as the “Eighth Wonder of the World.”

And, just as with India’s Border Roads Organization, keeping the road passable today depends on an army of workers kept busy by extreme weather that can close the road for months at a time (our driver informed us that the border crossings with Pakistan and Tajikistan are usually closed between October to May) and by one of the world’s most seismically active regions; in 2010, the collapse of a mountain on the Pakistani side created a lake that inundated a dozen miles of highway, forcing goods and passengers onto boats to continue the journey through the Hunza Valley.

This is one of the work camps along the Karakoram Highway that those armies of road workers stage from:

The official designation of the Karakoram Highway in China is China National Highway 314 (G314).

Another of the work camps along the highway… One can see the Gez River running alongside to the right (we visited late in August and so the river level was relatively low). Well, that, and the fact that the glaciers that feed the river are disappearing:

And there are some areas along the KKH where the Chinese government is trying to harness the rivers or conduct mining operations: 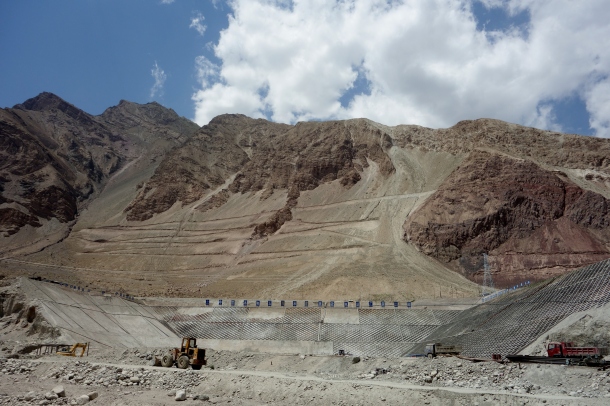 But as one continues toward Pakistan, these sparse pockets of Chinese activity become fewer and farther between and the road really opens up: 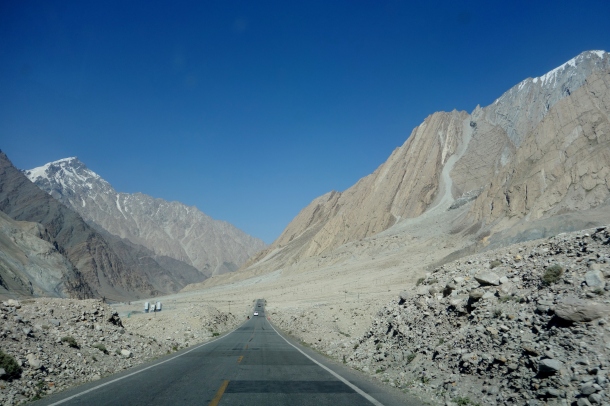 Which isn’t to suggest that it is all smooth sailing… Torrents of glacial melt from the mountains looming overhead often turn sections of the Karakoram Highway into a watery scree course:

Over the course of our trip from Kashgar down the Karakoram Highway, our vehicle was forced to navigate at least a half-dozen recent landslides… This isn’t all bad though. As one waits for the road to be cleared, there is a consolation prize aside from the beautiful scenery — the kaleidoscope of fellow travelers who inevitably emerge from their vehicles, pass around cigarettes and keep one another entertained.

In our group, when we were stopped for the landslide pictured below, were Pakistani gem traders returning from a successful buying trip in China’s southwest, a Kyrgyz medical student who had just passed his exams in eastern Shandong Province, grizzled Chinese migrant workers heading to an iron ore mine near the Tajikistan border and members of a Tajik wedding party, outfitted in embroidered tunics and felt pillbox hats.

In other words, I wasn’t sorry at all that our progress had been temporarily blocked: 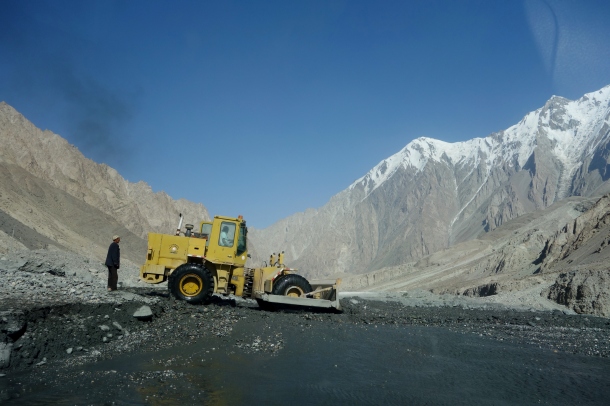 On occasion the Karakoram Highway levels off in broad river valleys… But, always, one will see mountains waiting for them in the distance:

In another instance, the rock-strewn desolation was suddenly interrupted by a blinding expanse of aquamarine, a giant glacial lake whose southern end was framed by enormous sand dunes: 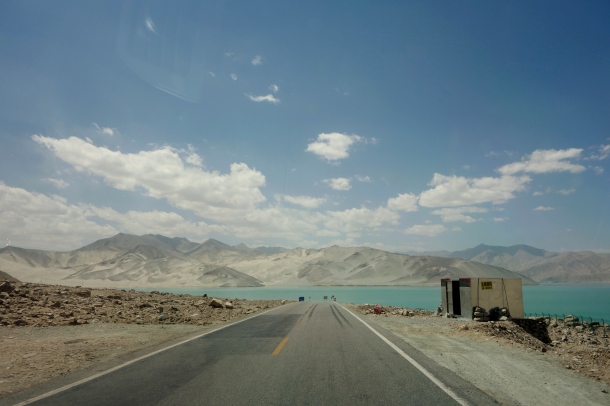 A view of the lake: 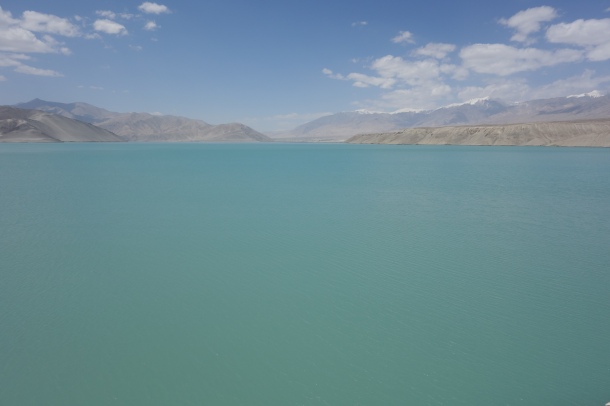 And a better view of the “Sand Mountains” at the end of the lake: 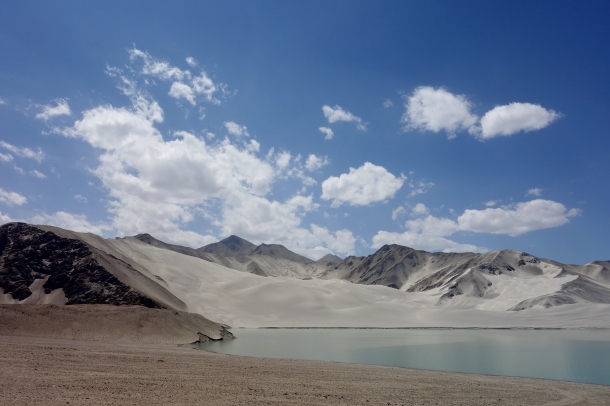 The Chinese government has dammed the lake in order to raise the water level. As such, the rising waters are swallowing a section of the Karakoram Highway (the re-routed section of highway can be seen in the background of the picture below). By the time you see this picture, the old section of the highway seen here will be underwater as well:

Of course, there are many other interesting things along the drive too… There are roughly 145,000 ethnic Kyrgyz in China, who have been cut off from their brethren in neighboring Kyrgyzstan since a falling-out between Mao and Khrushchev effectively sealed the border. These days, the Kyrgyz in Xinjiang still depend on wandering flocks of yaks and goats for survival, although younger people are heading to the cities in increasing numbers.

A herd of the yaks belonging to the nomadic Kyrgyz: 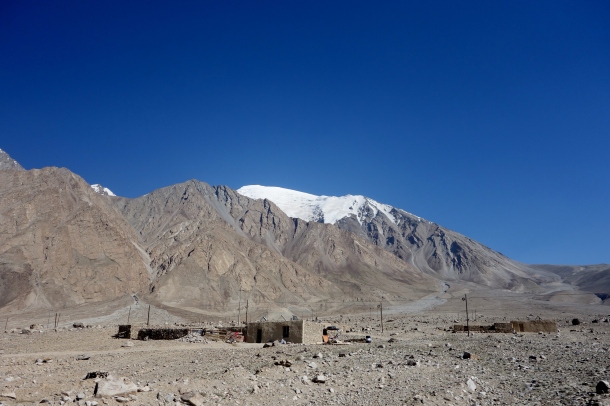 In what is a ubiquitous sight across this region of the world (and I mean that broadly because I am also including India and all of the ‘Stans) roadside stands, that always look like the one pictured below, will provide drinks, snacks and gossip:

A truck stop along the Karakoram Highway:

The truck stop pictured above was situated near a powerful runoff from the remains of the rapidly melting glacier that one can see on the mountain in the background: 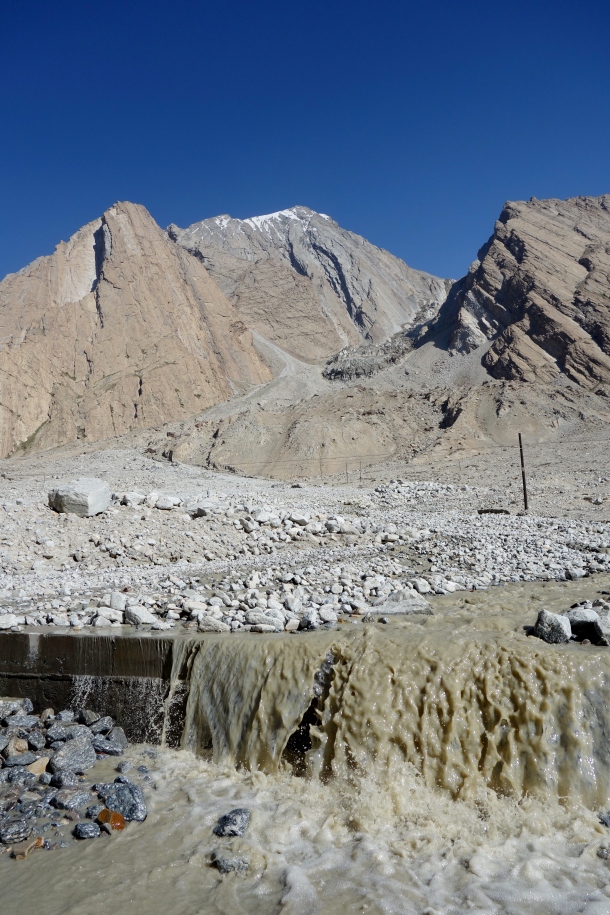 These guys were entertained by watching vehicles struggle through the challenging conditions:

Not everyone made it. This family had their car slip into a hole where it promptly sank up to its side mirrors in an icy torrent of mud and rock:

Continuing south on our journey, we stayed at Lake Karakul (which will be the subject of a separate post) and made our way toward Pakistan, where the official designation of the Karakoram Highway becomes the N-35 and where the KKH supposedly navigates the highest concentration of peaks and glaciers in the world…

Aside from the sections of pavement and reliable mobile phone service that put Verizon and Sprint to shame, the journey is little changed in the 2,000 years since Silk Road traders shuttling between Europe, Asia and the Middle East found safe passage through the Karakoram Mountains. Travelers today are presented with the same barren stretches of dun-colored stone punctuated by the occasional glacial lake, the roiling Gez River and emerald grasslands speckled with white yurts and black yaks:

However, The Velvet Rocket has already visited Pakistan and this trip was about understanding Xinjiang. So, eventually, we somewhat reluctantly turned around and headed back toward Kashgar:

Making our way back down through the Kunlun Mountains… The large truck in the center of the picture that is absolutely dwarfed by the cliffs next to it, should, hopefully, provide some sense of the scale of this landscape:

This scene in the foothills reminded me very much of Afghanistan (tell me it doesn’t look like that first picture). And, in fact, if one looks at a map, we really aren’t that far from Afghanistan here:

11 thoughts on “Driving The Karakoram Highway”