Crossing into Chechnya from Ingushetia one will immediately find themselves entering the plains of Chechnya:

The Russians like the plains. The plains offer greater visibility and mobility and thus the mechanized advantages of the Russian military can more easily be brought to bear here, making it easier to do battle with the Chechens.

Rather than driving directly to Grozny, a right turn shortly after venturing into Chechnya from Ingushetia will take one through a number of smaller towns and villages, providing a broader picture of Chechnya. Dear readers know that I like to profile particular cities and sites, but also to provide an overall sense of what an area or country looks and feels like. The best way I have discovered to do that (so far anyway) is to just take pictures on drives through the countryside. So, that is what has been done.

This is also the route that Chechens and Ingush would have taken during the wartime period in order to avoid the notorious Russian checkpoint at Assinovskaya on the main road to Grozny.

The first town one will come to along the route I suggested above is Bamut. Bamut deserved a post of its own (which can be seen here) and so I do not include it in this post.

This scene is just outside the town of Bamut:

Some villages were completely wiped out in the First and Second Chechen Wars and so it is not uncommon to see roads, such as the one below, that used to take one to a village or farm complex, slowing becoming overgrown.

After leaving the area around Bamut, one will come across the larger town of Achkhoy-Martan: 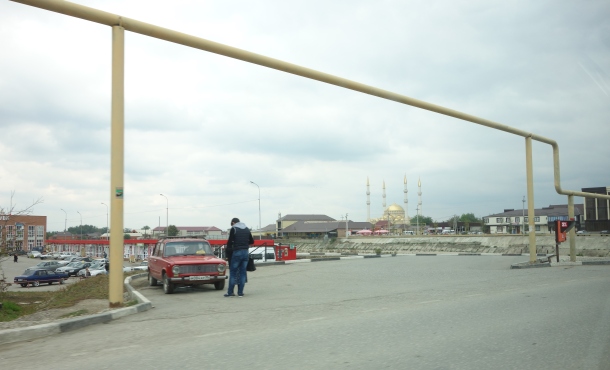 Now, one thing the Kadyrovs did (and are doing) to try and bolster their support and credibility within Chechnya is to go on a mosque construction binge. This is an effort to burnish their Islamic credentials and to blunt criticism that Akhmad (and then Ramzan after Akhmad was assassinated in 2004) are simply sellouts to Moscow. These efforts are not particularly successful as far as propaganda goes, but the result is that even smaller towns have huge, luxurious mosques dominating their centers now:

This is the exterior of the mosque in Achkhoy-Martan:

The interior of the mosque:

Out of Achkhoy-Martan on the road to Yandi: 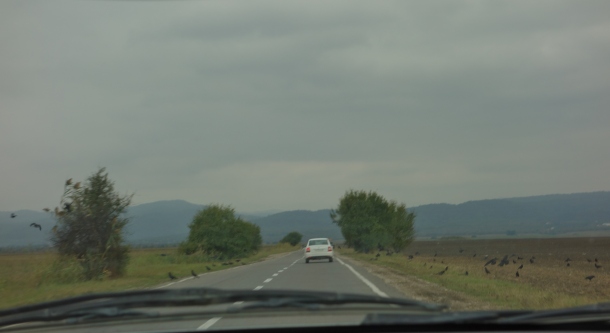 Some of the locals told us that Dzhokhar Dudayev, the rebel Chechen leader, was born in Yandi, but I have read elsewhere that he was born in the village of Yalkhoroy.

The center of Yandi:

Some of Yandi’s local color… You’ll no doubt notice the bombed out building they are standing next to: 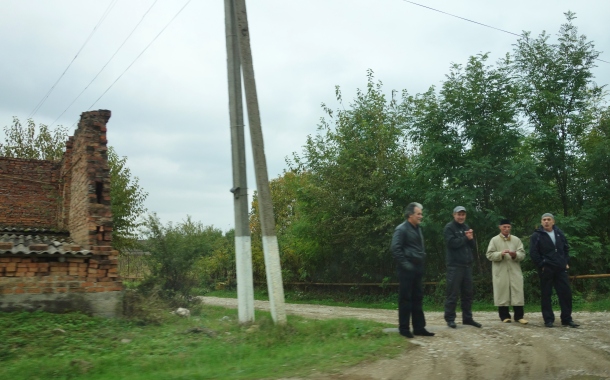 Yandi, like many towns and villages across Chechnya, is full of buildings destroyed in the First and Second Chechen Wars. Every inch of Chechnya was fought over during the recent conflict: 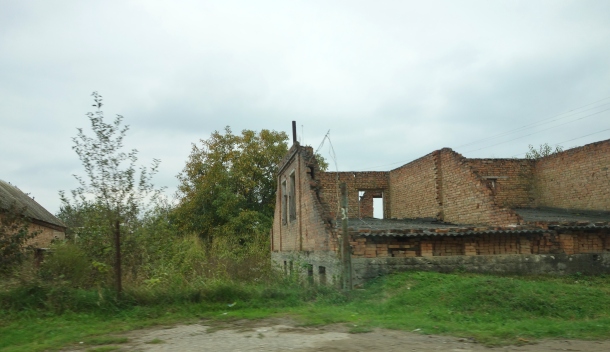 Shortly before our arrival, a Russian military vehicle was blown up in Yandi. Russia is quite eager to project an image that everything is fine in Chechnya now and that they have everything firmly under control, but such incidents undermine that impression Russia is trying so hard to project. So, these events are often cast as an “accident” or are dramatically downplayed – sometimes even swept under the rug completely.

This attack featured two explosions, which is a tactic used often by the Chechen rebels, as the first blast destroys the target and a delayed second blast will kill those responding to the first blast: 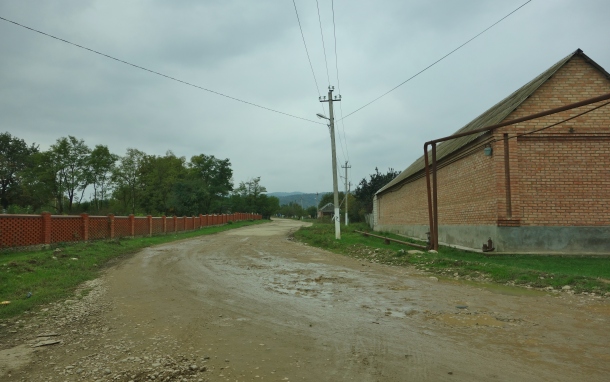 The river that passes through Yandi is the Netkhoy:

Here is a better view of the Netkhoy River: 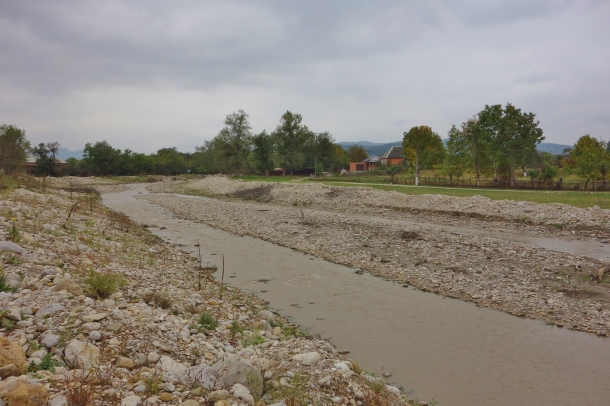 And this is the rickety bridge in Yandi that one must use to cross the river:

Yandi continues on the other side of the river as well:

We observed that the towns were fairly devoid of life and the countryside was almost completely deserted aside from the ubiquitous checkpoints.

This is on the rough road to Shalazhi:

Another view of the mosque in Shalazhi: 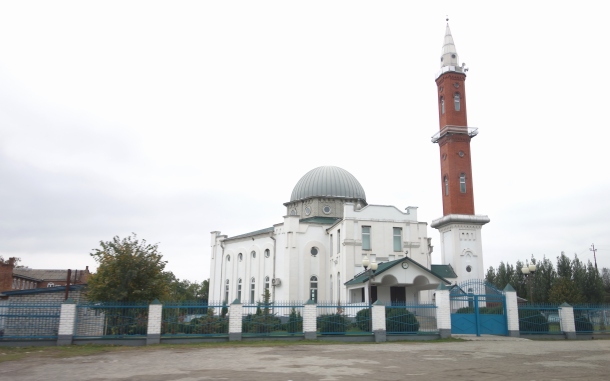 Aside from checkpoints and cemeteries, the faces of Putin and/or the Kadyrovs (Ramzan or Akhmad) are also found everywhere across the landscapes of Chechnya. Thus, for example, one frequently sees arches such as the one below whenever entering or exiting a town…

One really easy way to wind up a Chechen is to casually observe how much the Chechen people must love Putin and the Kadyrovs by having so many pictures of them everywhere – it’s good fun to watch their reaction.

The reality is that with the exception of the members of the same clan as the Kadyrovs (who have benefited enormously from this connection), the majority of Chechens dislike Ramzan Kadyrov and the local authorities. As they see it, the Kadyrov family and their associates hold all of the power in Chechnya simply because they switched sides and swore loyalty to Putin and the government in Moscow and not because they are competent or fair:

Gekhi-Chu is significant as it was in a ravine just outside of here where the Russians finally caught up to Dzhokhar Dudayev and killed him on April 21, 1996. Supposedly, Dudayev was on his satellite phone with Russian envoy Konstantin Borovoi about setting peace talks with Yeltsin when Russian scanners were able to lock onto his signal and to direct a signal-guided missile to his location.

In The Hunter, The Hammer, and Heaven, Robert Young Pelton described experiencing this tactic when writing about his time in Chechnya in 1999. A rebel commander, Turpal-Ali Atgeriyev, asked to make a brief call on Pelton’s satellite phone and so they trekked outside to an open area where the brief call was made. As they were walking back to where they were staying, Pelton described hearing the rockets raining down on the spot where the call had just been made from.

The Russians claim that they knew Dudayev would frequently venture out into the ravine (which is why some question if he was not sold out by an insider) near Gekhi-Chu and so they planted explosives out there as a trap. So, supposedly when the missile was hurtling in, they also detonated these explosives that had been planted in the ravine. Therefore, the Russians state that it was actually the combination of these two explosions that killed Dudayev.

The Russian explanation seems somewhat bizarre and so there are still a lot of unanswered questions about Dudayev’s death.

In February of 2000, the Russian military attacked Gekhi-Chu after retreating rebel fighters had stopped there to rest overnight. Once the rebels departed the Russian forces demolished hundreds of homes and killed many of the residents.

Roshni-Chu is quite typical for a small Chechen village and so it provides one with a good sense of what the villages are like all across Chechnya.

Below, a man stands alone on the Chechen plains outside of Roshni-Chu…

Chechnya used to be heavily forested – even out on the plains. However, the Russians cleared the forests that covered the plains as part of their centuries-long effort to subjugate Chechnya as (just as today) they found the Chechens much easier to fight when they were forced out into the open.

There is a Russian expression – “Chechnya wasn’t conquered with the sword, but with the axe” – that reflects this reality:

From here the road swings north toward the larger town of Urus-Martan. If one chooses, one can push on to Grozny or take the “Road of Death” east to flirt with the mountains… This road was a main corridor for refugees fleeing the fighting up in the mountains during the recent wars. The refugees would travel down the reverse of the route I just took you on and then into Ingushetia. Unfortunately, as you can see below, this road is quite open and so even though it is not a good road, unless they drove well in excess of 100 miles per hour or more the refugees made easy targets for the Russian artillery, mortars and helicopter gunships. The total number of refugees killed is not known, but the road definitely earned its name.

The Road of Death: 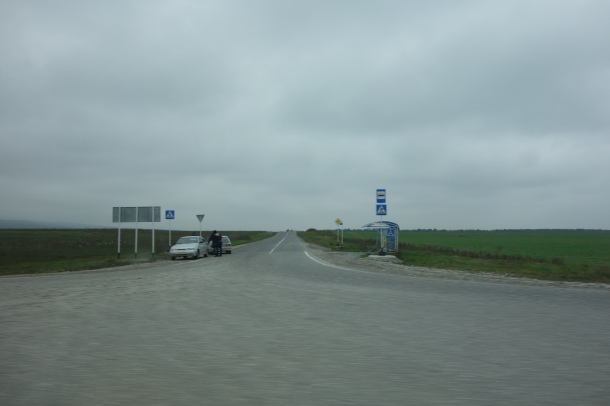 Moving past the Road of Death up to where the mountains drop down onto the plains… The scene below of these cattle grazing among the ruins of a bombed out farm is a very typical one: 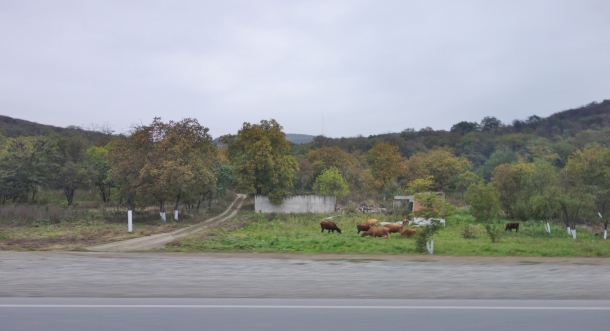 Skirting around the edge of the mountains:

If one looks closely, several traditional Chechen cuts of cured meat can be seen hanging outside of this shop:

As I mentioned above, cemeteries are another ubiquitous presence in Chechnya… Below are just a couple of them: 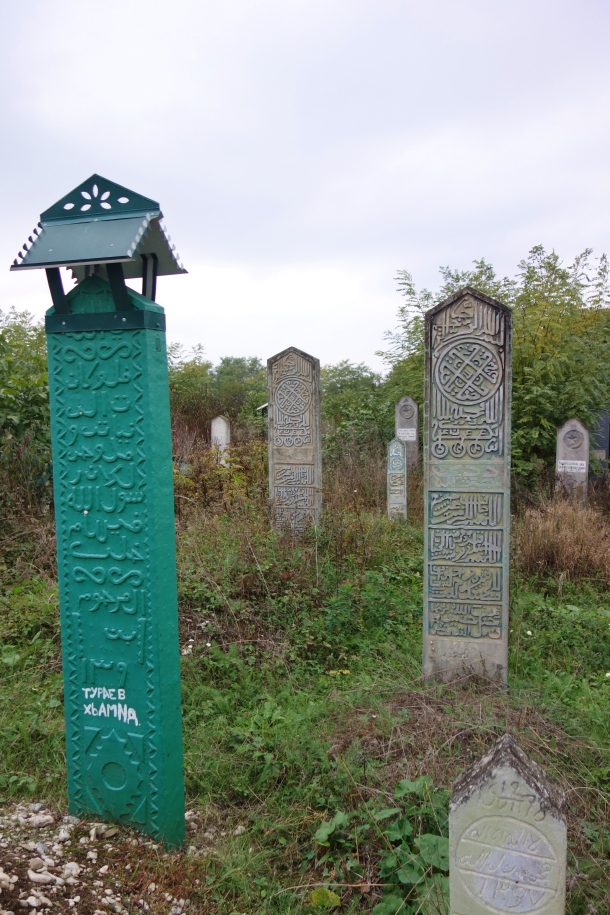 On the drive east toward Dagestan, we see those trends outlined above repeated…

The town of Argun is just outside of Grozny and so one sees the fairly tacky, modern architecture of Grozny here as well – the result of billions of dollars in constructions funds that Russia has directed here in an effort to assert the “everything is fine” narrative and to reward the Kadyrovs:

And, of course, the towns on the way to Dagestan have brand new, ostentatious mosques in “can’t miss” locations as well:

And, naturally, we have the ever-present police and checkpoints too:

One thought on “The Plains Of Chechnya”