First settled in 1853 when mines known as the Union Company and California Company were discovered, Howland Flat was once second in size and importance only to La Porte. Located twelve miles north of Downieville on the East Branch of Slate Creek and at the base of the dramatic 7,000′ elevation Table Rock Mountain, Howland Flat is still well worth a visit.

The population during its year of greatest activity, 1863, was approximately 1,500. In the same year, there were about 100 inhabitants at Potosi, and several hundred more were living and mining within a mile radius of Howland Flat. Thus, the town and vicinity comprised approximately 2,000 people.

In its prime, Howland Flat played host to several hotels, saloons, general stores, dentists and barbers. However, the town also was home to a surgeon, a bath house, a post office, a jewelry and watch repair shop, a theater, a notary public and at least one attorney.

Below are some pictures of Howland Flat during its heyday…

This picture was likely taken in the 1880s:

This main street pictured here is Down East Street and the road through the remains of Howland Flat follows the same path today. So, the street serves as a good reference point and I will use it as such below:

You can just make out Table Rock Mountain in the top part of this picture:

Howland Flat with its houses barely visible in the winter… In 1890, the snow in January was sixteen feet deep:

Today, the first indication that one is entering Howland Flat (when traveling from the direction of La Porte) comes just after the Lady Be Lucky mine when one will encounter this crumbling foundation off to the right. This used to be a Wells Fargo and a post office (named the Table Rock Post Office): 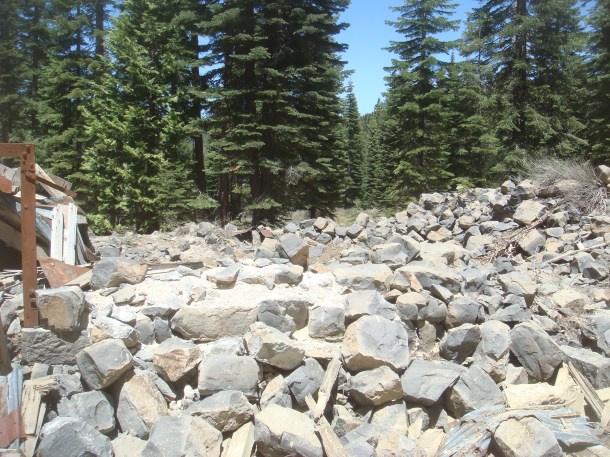 To help you orient yourself… If you refer back to the very first picture of Howland Flat, the Wells Fargo building is directly to the right, just out of view:

The vault was behind those boards in the background:

Located around this site was a clearing that used to house several stores serving the Chinese community in the area. One store sold firecrackers and rice. Another sold liquor and groceries. In back of the stores were opium dens, gambling houses and a Joss House.

The Joss House at Howland Flat was the only one in the Northern Mines. This place of worship for the Chinese was a one-room wooden building with an altar and many chairs.

Although Howland Flat had a large Chinese community, the largest number of immigrants were actually Irish.

Across the street from the Wells Fargo building is this meadow… The McDonnell home used to be here as well as the John Wolff & Son Brewery: 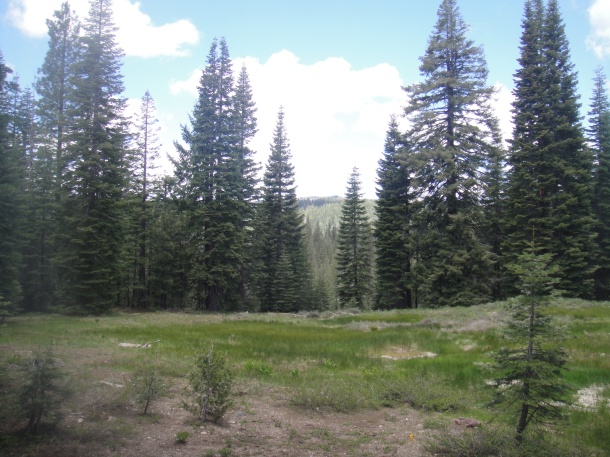 This is a picture of the brewery that used to be here:

This structure, which is in close proximity, hung on for a while… This was the home of Ah Guey – one of the more colorful Chinese residents of Howland Flat. Ah Guey (real name Guey Long) arrived in Howland Flat in the 1870s and mined in the area for an estimated fifty-four years before finally passing away in 1932. 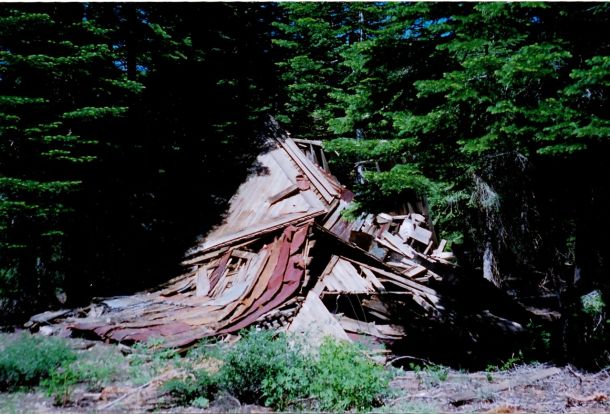 Unfortunately, his home is now quickly being consumed by the elements:

The remains of Ah Guey’s home are to the right in this picture below… At one time, the homes of Jim Hayes and George Hayes could also be found in this meadow: 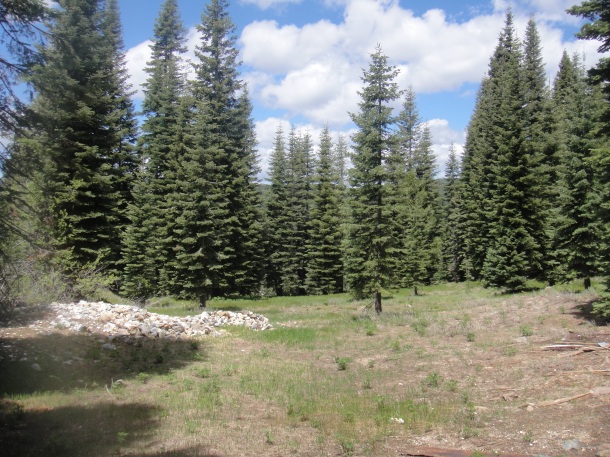 Farther back in the trees, one will discover this mini house… This picture was taken in 2005: 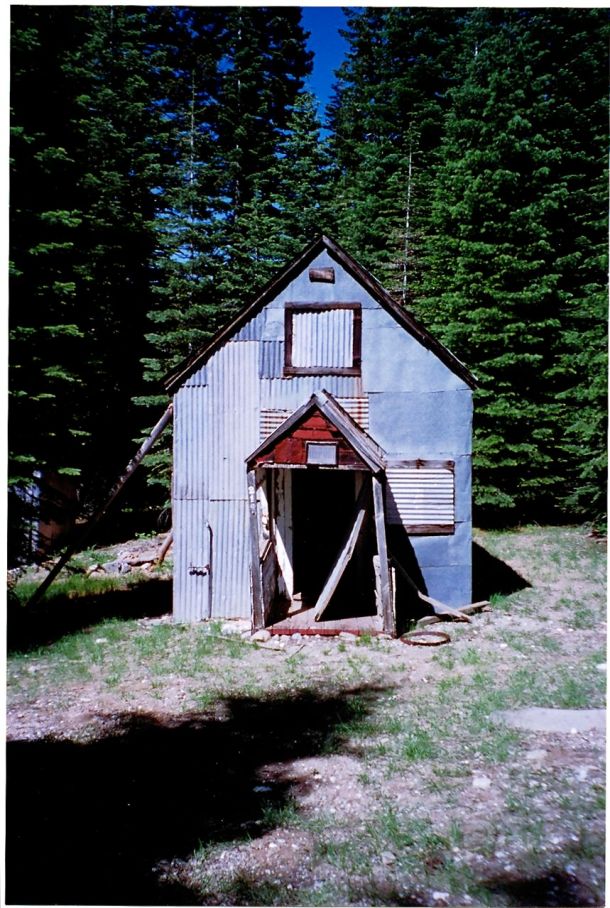 Unfortunately, the front section of the mini house has now collapsed: 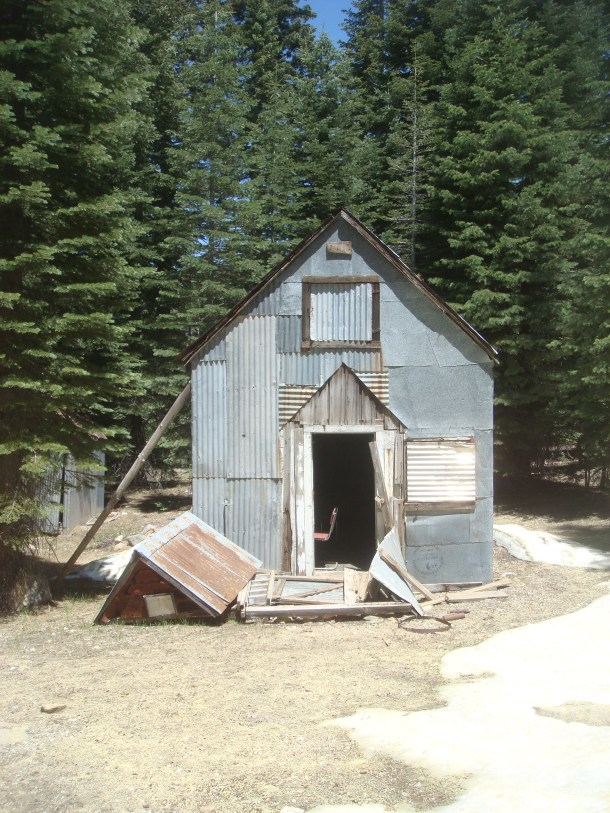 This is my friend Ian, who is of average height, standing inside the mini house to demonstrate its scale: 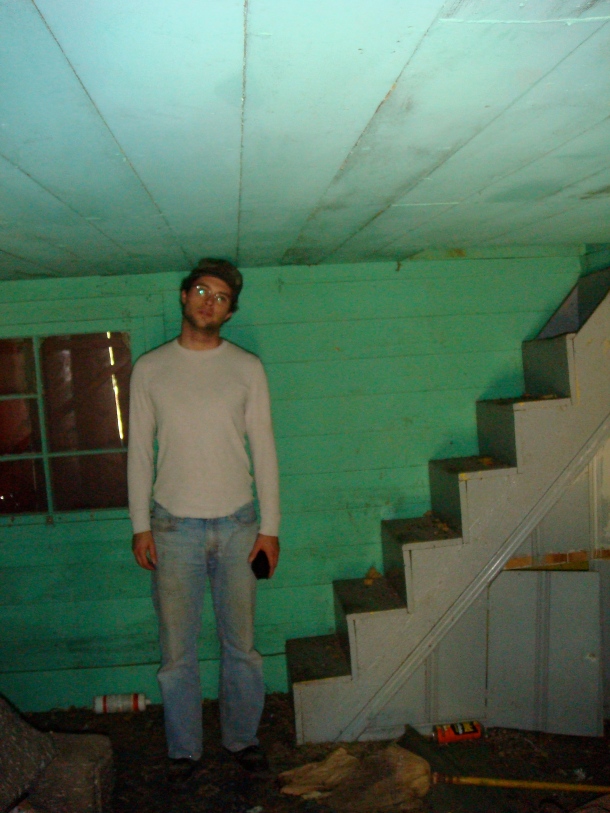 A stone just outside the mini house is carved with the following:

Continuing on the remains of Down East Street, one will next come to this white house, named “Miners’ Home”: 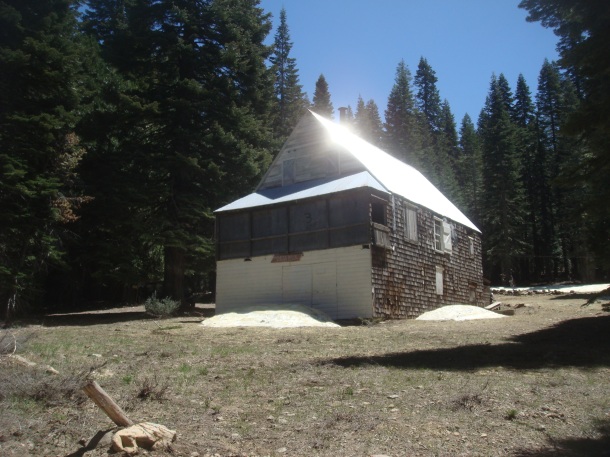 Most summers when I have visited Howland Flat, there have been people staying here on a seasonal basis.

An outbuilding near the Miners’ Home, which I have been advised was a stable: 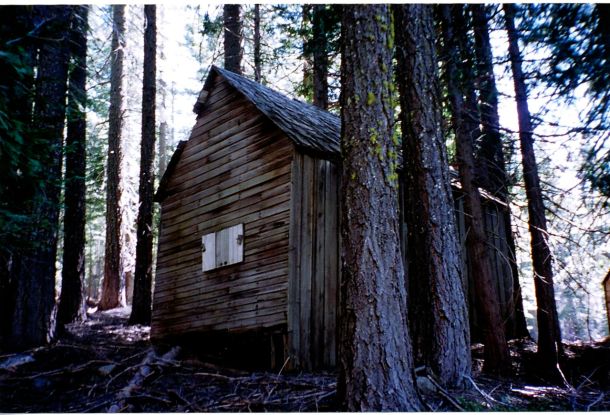 Nearby the Miners’ Home one used to find the sign and structure pictured below… This picture was taken in 1986: 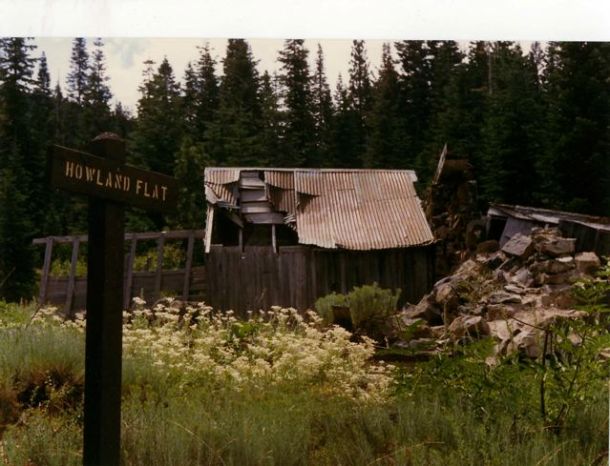 Now, there is nothing left of the above.

Across the street from the Miner’s Home are the remains of this structure… I have been told this may have been the Cosker family home. Judging by the maps, it appears it could also have been the Carmichael Barn, but that is speculation on my part:

Just a short distance farther on Down East Street will bring one to this stand of trees (on the right) where the “new” schoolhouse in Howland Flat used to be found:

Pressing on, one will very shortly come to this meadow on the left: 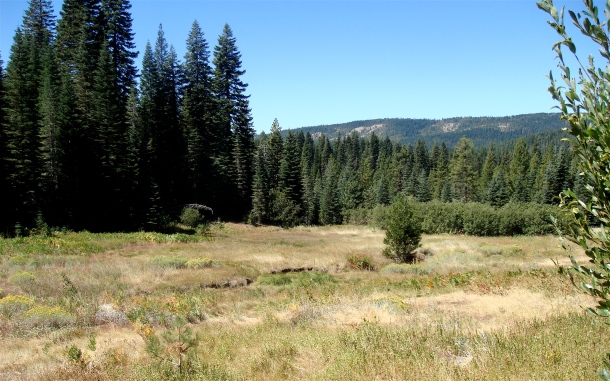 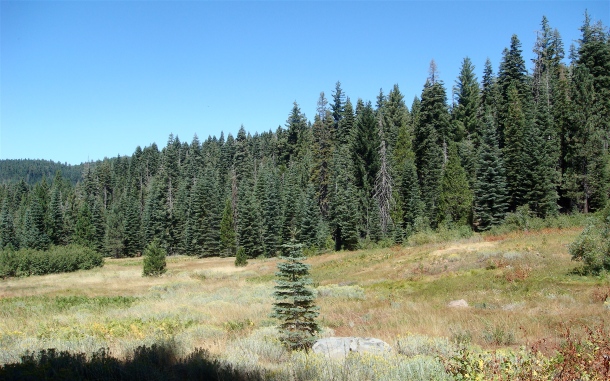 There are a number of ruins to be found across the meadow: 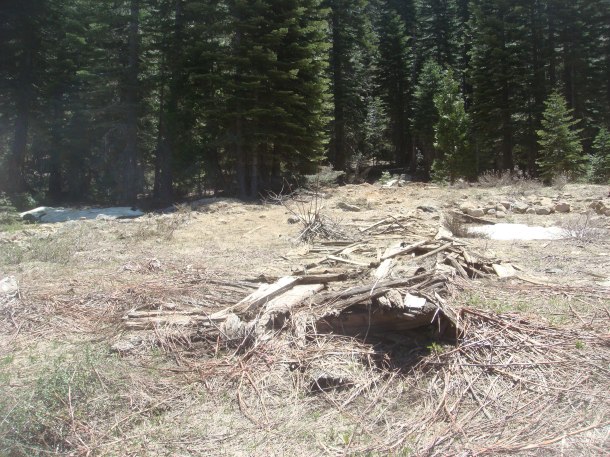 And you can’t tell because of the trees, but the land behind the trees at the bottom of the meadow drops down into an area that experienced intensive hydraulic mining. Gold mines such as the Midas Mine and the Last Chance Hydraulic Mine operated here: 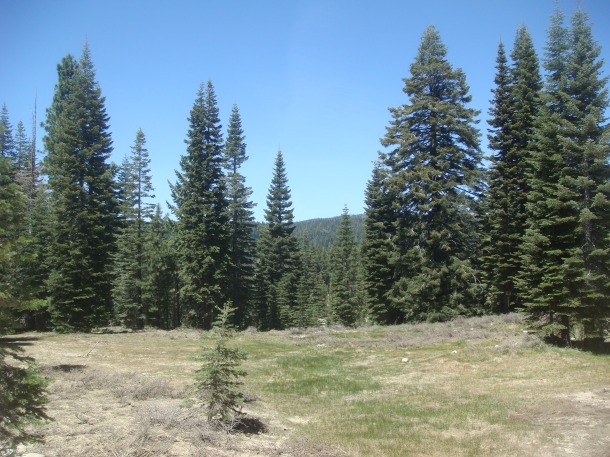 Also toward the bottom part of the main meadow, several smaller open areas branch off…These have their own sets of ruins:

The girls examining some of the historical curiosities left on the ground… The first time I came here with my father, someone had just come through (I assume with a metal detector) and uncovered all sorts of interesting items such as a boar’s tusk, unused ammunition and Chinese dishes:

However, in the center of the meadow, an intact structure still stands: 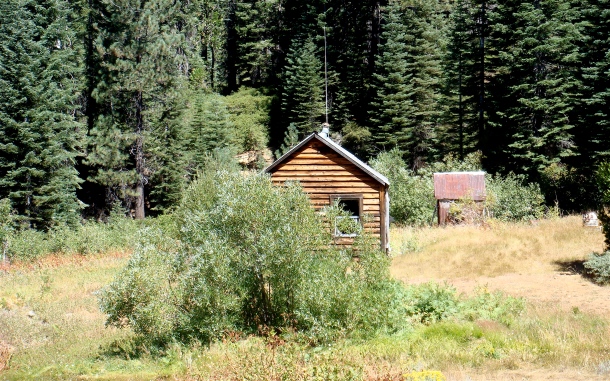 When I first visited Howland Flat as a child with my father (mid-1980s), this home in the meadow was still occupied. This is what the interior looks like today: 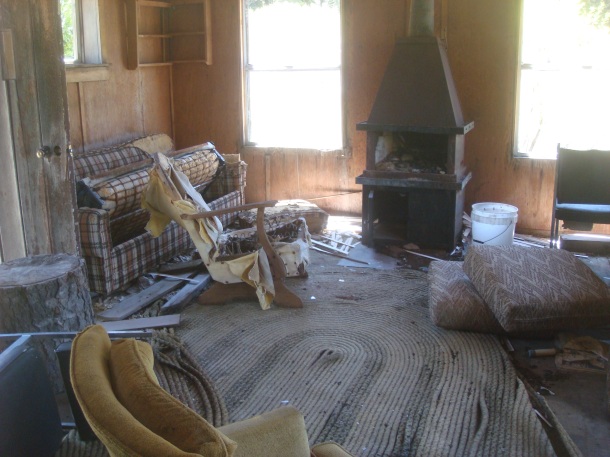 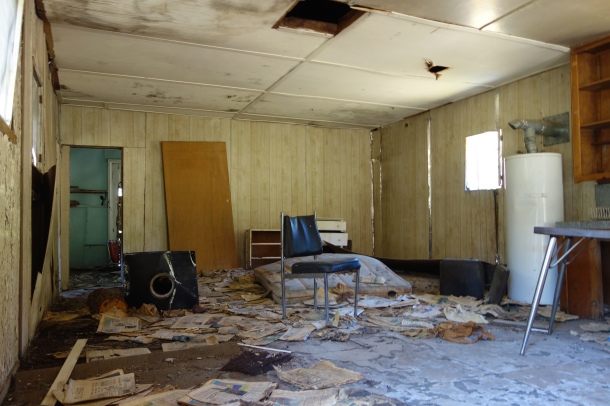 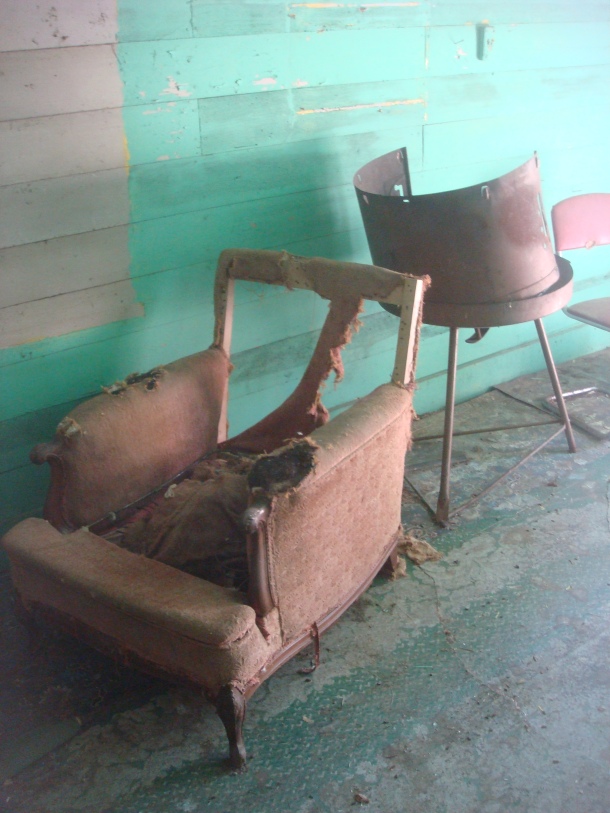 Very shortly beyond the new schoolhouse mentioned above (again on the right), one will arrive at this leveled area that was the site of the Becker Hotel: 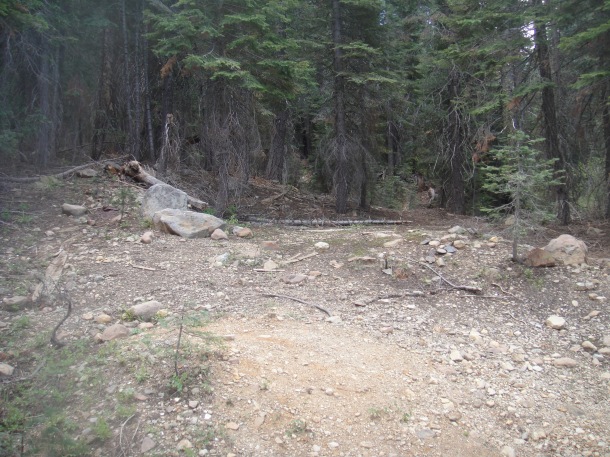 This is directly to the left of the above picture: 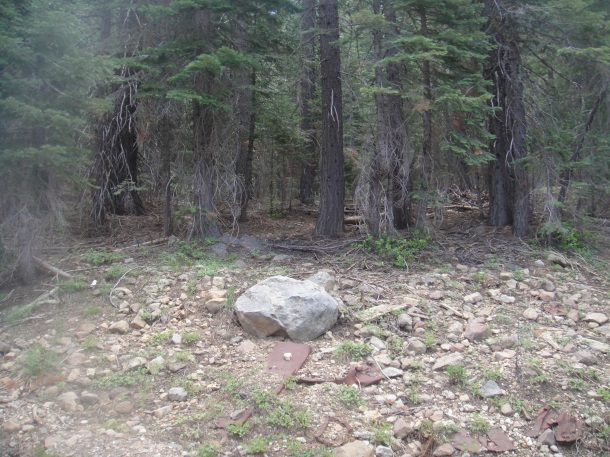 A picture of the hotel in its heyday:

To give you some perspective on where exactly this is, in this picture below I am standing at the site of Becker’s Hotel and facing the cabin in the meadow. In the foreground are Jann Garvis and Don Goard who were kindly showing me around:

Here’s a better view of the ruins directly behind Jann and Don… This may have been a stable for those staying at the Becker Hotel:

Farther up the road (on the left side) and at the top of the meadow, one can find this structure: 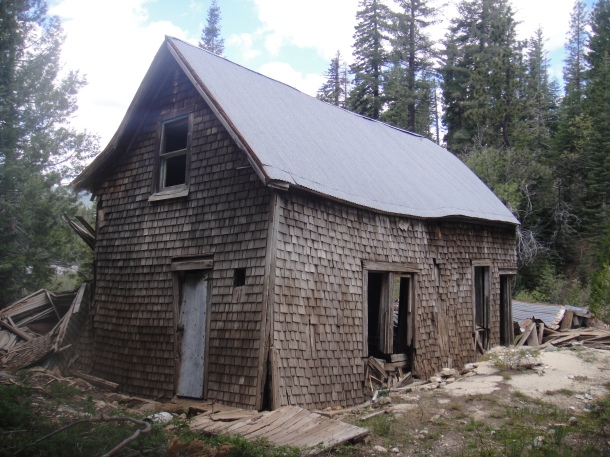 I have been informed that Tim Hayes (who had ten children) lived here and he was followed by Ruby Hayes (You’ll recall the name Hayes from the mini house).

This is how the home pictured above looked in 1986… Even back in 1986, this structure was supposedly well over one hundred years old and had been lived in until just a few years before. So, a lot of history is being lost here:

This next section is a bit of a gray area. According to the old maps that exist of this region, the area below may actually be in Potosi. However, everyone seems to refer to this area as the “Howland Flat graves” or the “Howland Flat cemetery.” So, I include the following in both the Howland Flat article as well as the Potosi one. Potosi and Howland Flat were right next to each other and so some overlap is understandable.

If one continues past Howland Flat, one will come to a fork in the road (this fork is where the town of Potosi was located). The road to the right leads to Poker Flat and the road to the left winds a little way up the hill overlooking the town. Soon, one will come across a small cemetery next to the road.

There is/was both a Catholic and a Protestant cemetery covering this area. The cemetery next to the road is the Catholic cemetery: 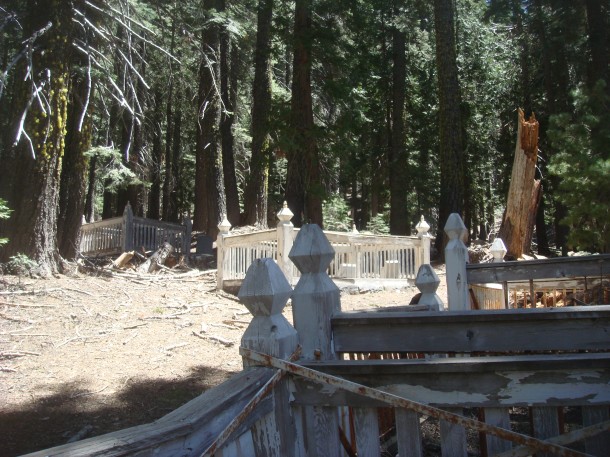 Below, is a picture that shows the Catholic Church that used to stand next to the graves pictured above. In the background, Table Rock can be seen much more clearly than at present day:

I must mention that the historical pictures in this article come from the outstanding and exhaustively researched Roar of the Monitors by Jann E. Garvis. If you’re interested in this area’s history, you’ll find a staggering amount of information in this book and I highly recommend it.

If one crosses the road onto the land marked as being a claim controlled by Winkeye Mining, one will see a number of other graves in two areas. This is what is left of the Protestant cemetery. The tailing ponds of the Winkeye Mine operation bisect the graves, with one section being below the ponds on the flat area overlooking Howland Flat and the other being in the brush next to the other side of the pond. If one wanders through the brush in this area, one should come across a number of graves.

The below are pictures of the graves from both sides of the tailing ponds:

This is the Frank Becker associated with the Becker Hotel mentioned above:

The late Dick O’Rourke (a colorful local character) standing next to the same graves in 1986: 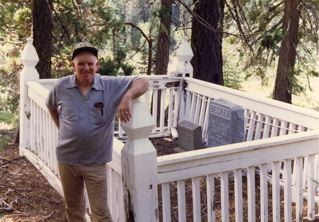 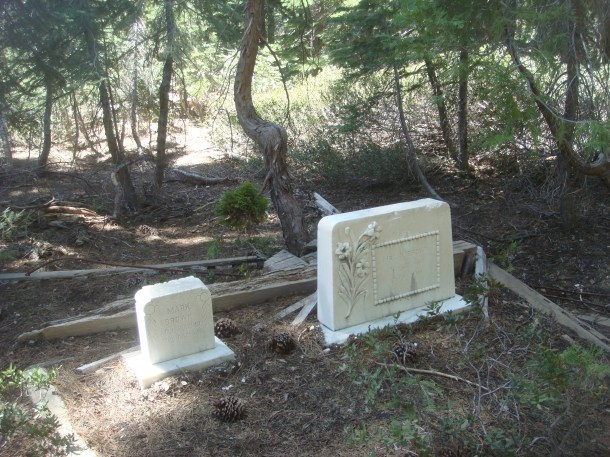 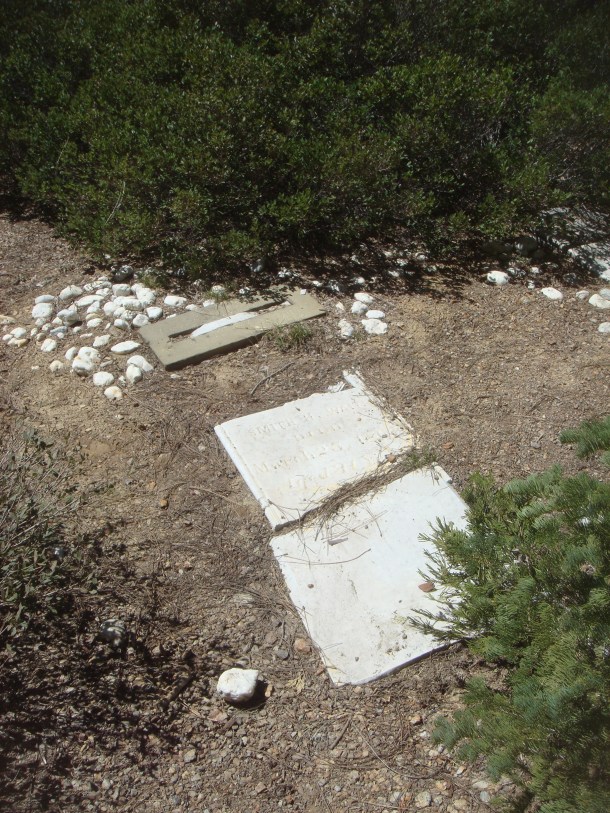 There is also a Chinese cemetery in the Howland Flat/Potosi area, but I have never been able to find it. Apparently, the cemetery (empty of bodies) was hidden in dense manzanita, with the dead finding their final resting places in their homeland.

A listing of the graves that have been found in the Catholic and Protestant cemeteries can be found here.

As with the others in this series, this remains a long-term project. I shall update these articles anytime new information comes into my possession.

As rapidly as these remaining towns are disappearing, my goal is to get something up to try and collect some of the memories of those that still remember this area as it was and to document what little is left of these towns before they are gone completely. The impetus for this comes from seeing how much has disappeared just in the brief decade or two that I have been visiting.