So, the other day Valerie and I went and checked out the Bodies Revealed exhibit which is temporarily nearby. It’s an interesting exhibition.

I think his profile is a little more flattering to him… 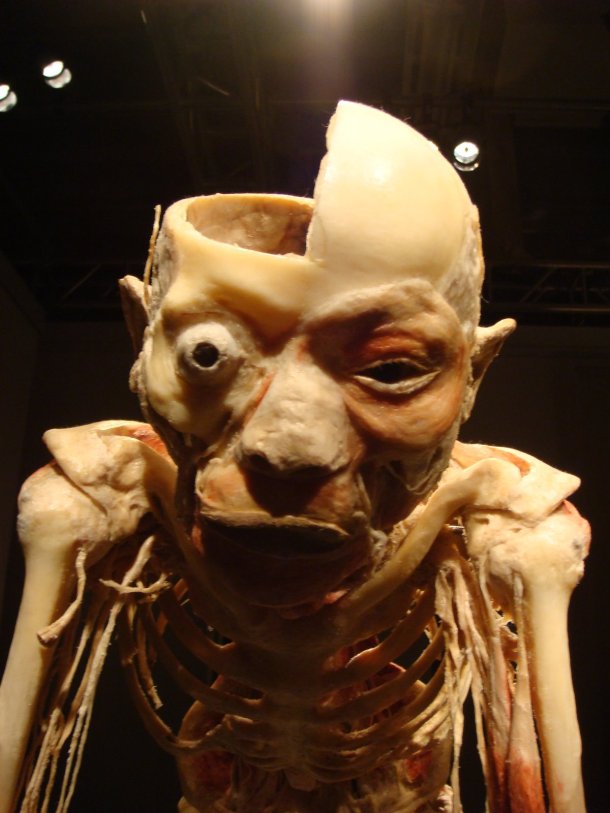 Now, some things are hard to ignore…

We were curious about the preponderance of male bodies on display and so I asked one of the staff members the reason for this. She informed me that by a margin of more than 20 to 1, that it is men that donate their bodies to science. She said that this issue had been researched and women are very protective of how their bodies are used and are sensitive about being put on display. Come on girls, lighten up. You’ll be dead and therefore incapable of caring…

I thought these blood vessels of the liver were attractive in an artistic sort of way:

Apparently, a fetus is translucent and we were informed that a newborn remains this way as well for up to a week after birth. So, if you stumble across an infant less than a week old somewhere, hold a flashlight underneath its hand. You’ll get quite a display. The fetus here was lit from the bottom, but all of those colors are natural. No dyes were used:

Why does anyone smoke these days? Heroin is better for you:

This heart was filled with dyed plastics to display the various components:

The circulatory system of this individual was injected with a transparent plastic and then (carefully) removed:

2 thoughts on “Highlights from Bodies Revealed”