Following our dose of the future, we headed for ancient history by visiting the renowned Rosicrucian Museum in San Jose…

The entrance to the Rosicrucian Museum: 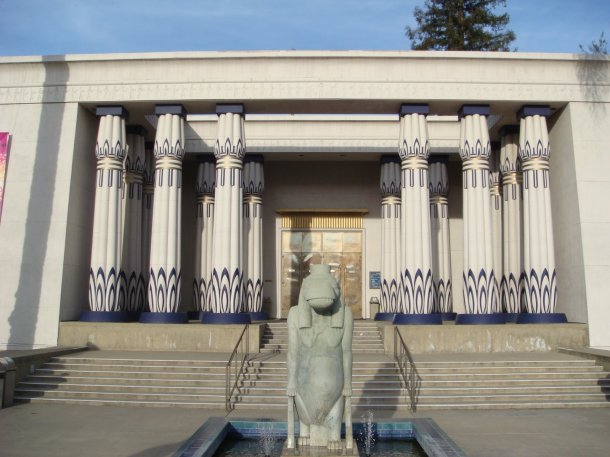 A statue in the park outside the museum:

Mummified Nile Catfish – Fish and beef were often mummified and placed in tombs for the deceased to eat in the afterlife: 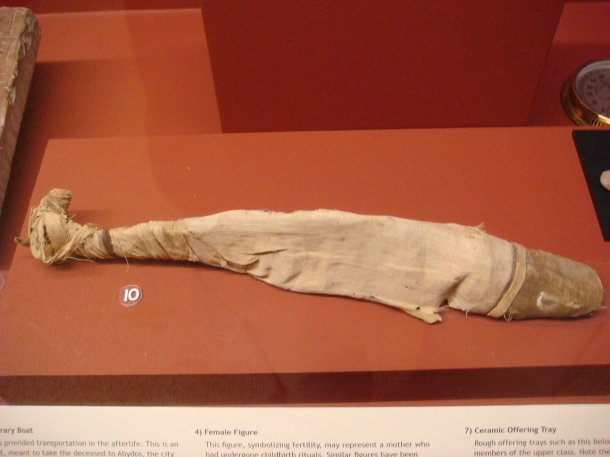 Mummified Baby Crocodiles – mummified to honor the god Sobek. They could be wrapped individually or bound with the mummy of their mother: 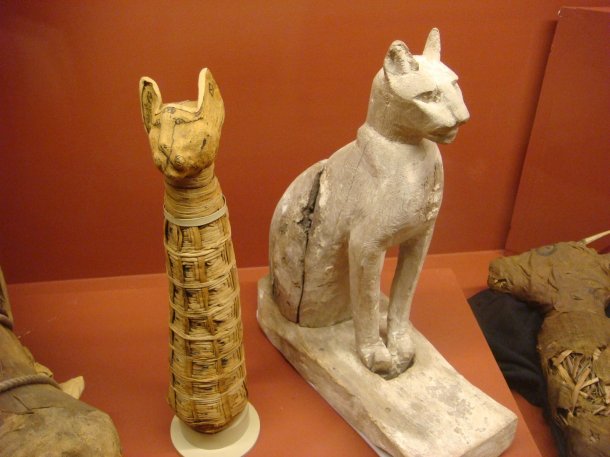 Cartonnaged Falcon Mummy and Unwrapped Falcons – Falcons represented the god Horus, patron god of kingship and the sun and sky. The standing falcon mummy is completely plastered and gilded, while the falcon mummies below were simply preserved by dipping them in resin: 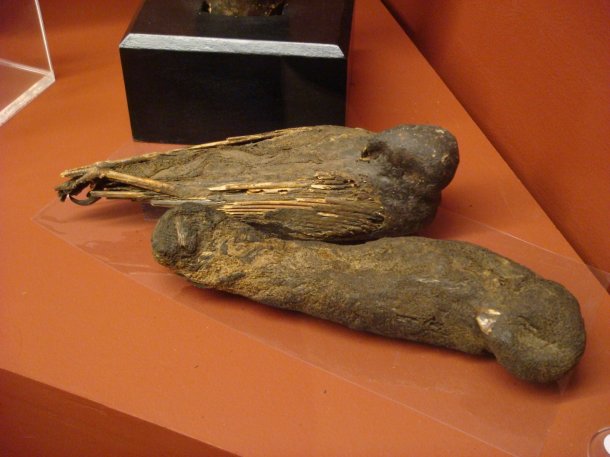 If you look closely at the coffin’s sides, you’ll notice some “editing,” likely from the Victorian era. One of the coffin’s previous owners found the phallic fertility images on the sides of the coffin repugnant and attempted to erase the offending details. The funny thing is that this misguided individual succeeded only in making these details more obvious with his or her vandalism:

The museum housed a number of excellent models. The original of this particular site was destroyed recently after the Nile began filling in behind the completed Aswan dam: 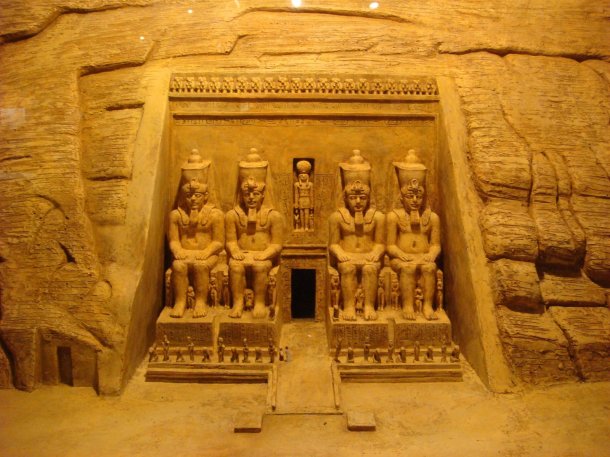 This mummy did not have any wrappings or other decorations on his body that might reveal his identity. His fingernails were dyed with henna, but his hair was naturally red. Curious: 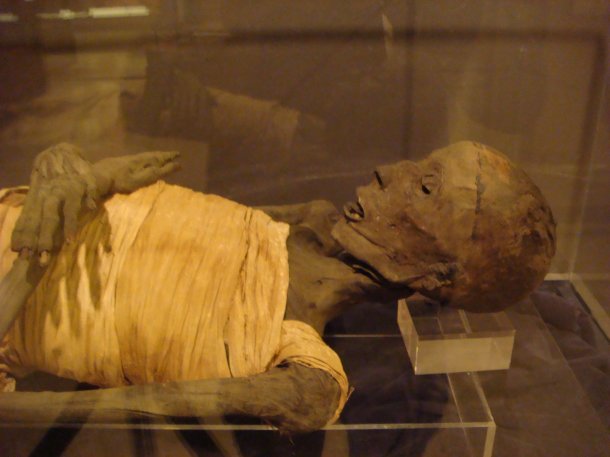 The museum also has a replica of a tomb complex. This is the entrance:

Recreation of a looted grave site inside the tomb complex replica:

Ancient Egyptian “pillows” were made to support the neck while protecting elaborate hairstyles:

Tweezer and Razor Sets – The Egyptians were very fastidious about facial and body hair, and strove to eliminate all but the hair on their heads: 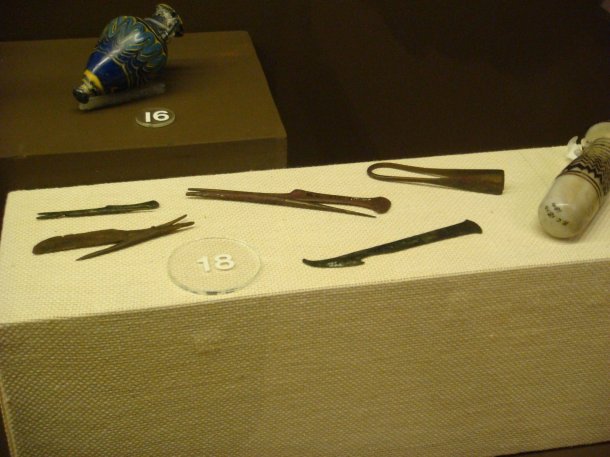 Eye-paint made from galena, a type of lead: 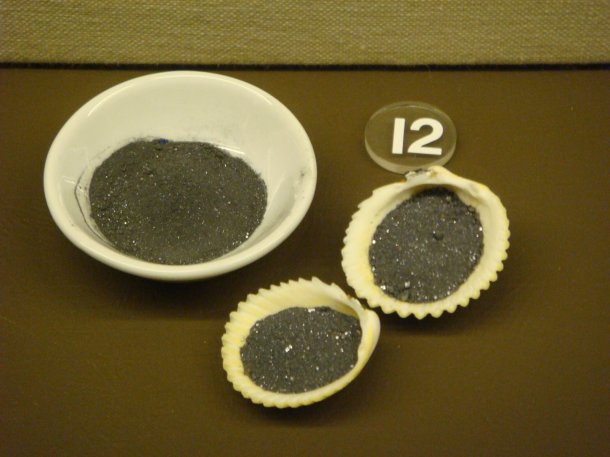 Some examples of Egyptian jewelry: 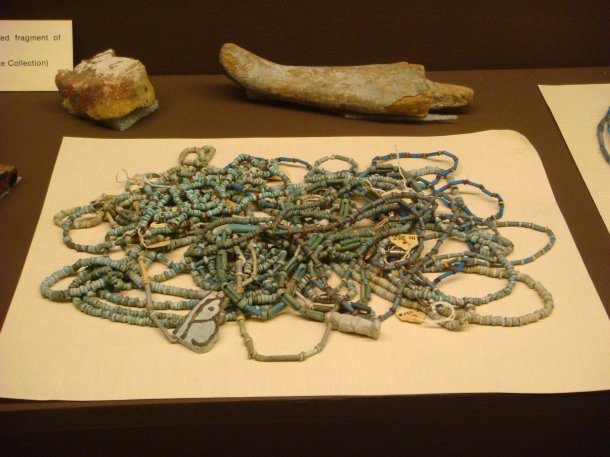 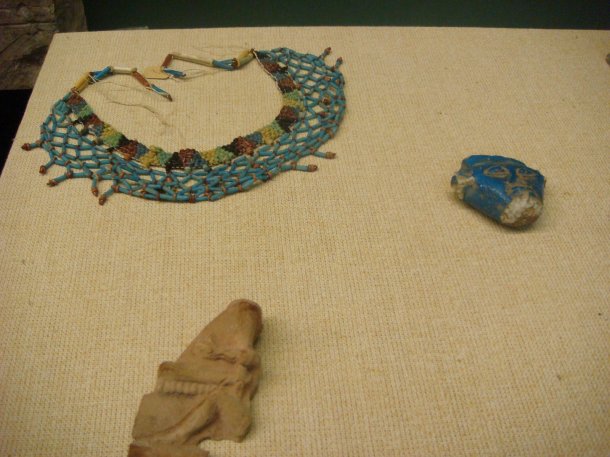 People of all classes wore sandals. So, it looks like I’m in good company by wearing flip flops all the time: 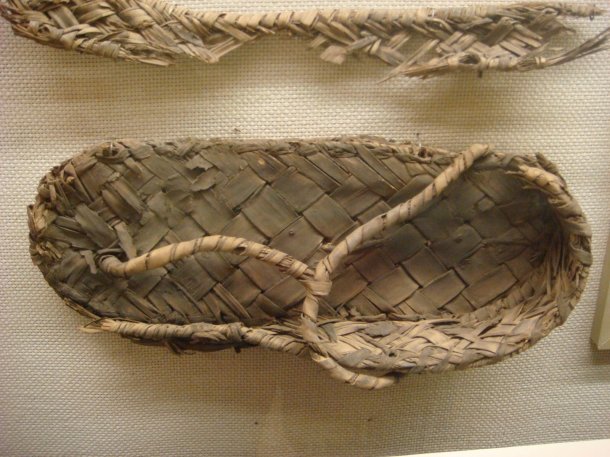 Scales were necessary to ensure equal trading and a fair deal. Sabotaging a scale was an offense punishable by death: 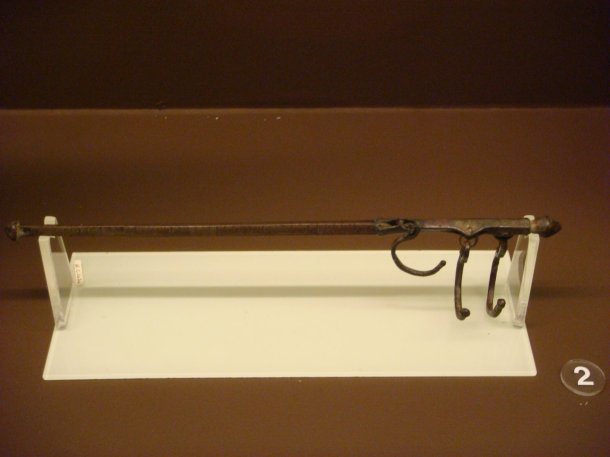 Cones of Cedars of Lebanon – Lebanon was known in ancient times for its vast forests of Lebanon Cedar trees. Cedrus libani, of the pine family, is an evergreen tree that can grow up to 130 feet tall.

The ancient Lebanese garnered immense wealth through trade. The Egyptians lacked a native source of wood, so they turned to imported Lebanon Cedar for construction of temples and coffins.

So much cedar was clear-cut for trade that Lebanon became deforested. Lebanon’s climate changed and its economy subsequently collapsed.

Today there are a few remaining stands of Lebanon Cedars, but even these trees are endangered due to many factors, many of them related to the legacy of the ancient clear-cutting. These include missing elements of the ecosystem (other plants and birds), drought and soil erosion. Modern warfare has also damaged many trees.

Lebanon’s environment is irrevocably altered, and the famous forests of cedar may never return. This is a fine ancient example of an environmentally disastrous practice with lasting repercussions:

Beer Strainer – Mesopotamian barley beer was quite thick and required straining prior to serving: 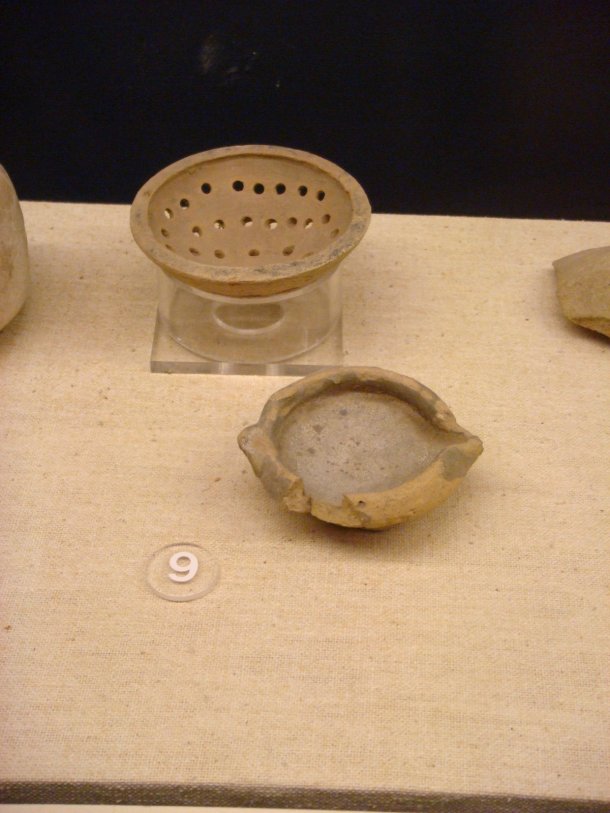 Another mummy in the museum:

Gazelle Mummy – Women of means kept gazelles as house pets and hand-fed them. This elderly gazelle, which suffered from arthritis and tooth loss, was a beloved pet mummified for its owner’s tomb: 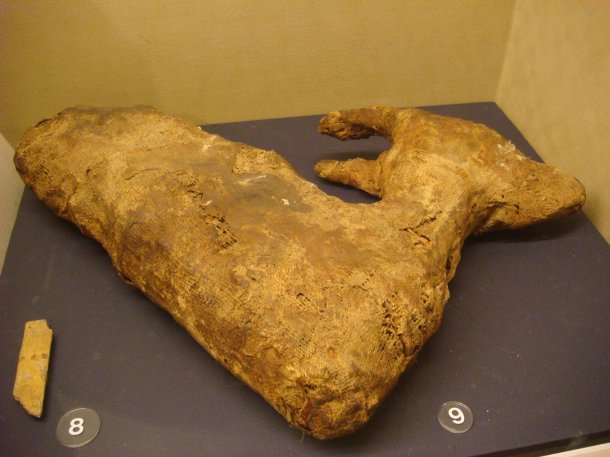 Scarab Beetle – This modern-day scarab beetle was collected in Egypt. The Egyptians watched scarabs rolling balls of dung across the sand, and so eventually a myth developed in which a scarab pushed the sun across the sky: 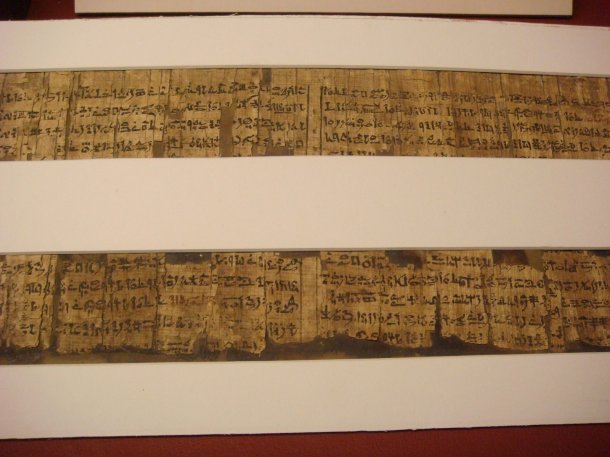 Snake Coffins – These small coffins were intended as votive offerings to the snake goddess Wadjet, who protected the pharaoh. An x-ray image revealed the mummies of two baby cobras inside this particular box: 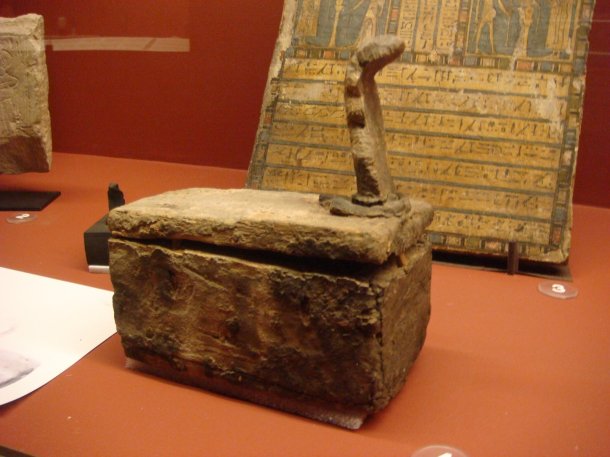 Vast harems, advanced health care, flip flops, beer, slaves, warm weather – One could have had a worse life than being wealthy and powerful in ancient Egypt…

As we were leaving the museum, I snapped this blurry picture of a group of San Jose’s finest that were loitering in the park at the museum. Immediately after I took the picture, the group broke up and before we were down the block one of them was pulling us over on the pretense that there was a problem with our registration. The “problem” soon evaporated after Brandon presented his Marine ID card. Turns out the cop had also been in the Marines… As he was sending us on our way, he mentioned that they’d radioed in the license plate information before we even left the parking lot.

Trying to catch us ridin’ dirty – not gonna happen…