This scene in Yemen caught my eye because we had been traveling through the desert for quite some time without seeing a single other human being when suddenly we were in blanketing smoke with figures moving through it like ghosts – appearing and disappearing in the swirling smoke. The effect was enhanced by the tremendous heat and the white sand of the desert which caused a sort of snow blindness in the intense sun:

These figures were, of course, producing and selling charcoal along the roadside. Using large pits as a shield against oxygen and to insulate the slowly carbonizing wood from losing excessive amounts of heat, this method of creating charcoal probably extends back to the time when humans first learned to control fire. And given that one only needs wood and soil to produce charcoal in this manner, this practically cost-free method of creating a product with economic value will likely persist for much longer in the era of humans.

Piles of wood waiting to be turned into charcoal rest on the barren ground next to wood-filled pits that have been covered over with dirt in the charcoal production process: 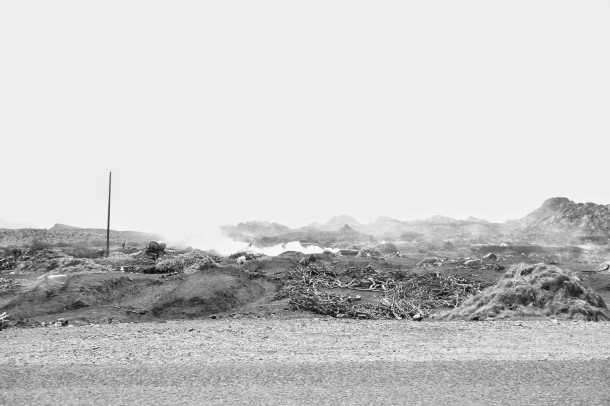 The men selling bags of charcoal – the finished product – from their camp along the road: 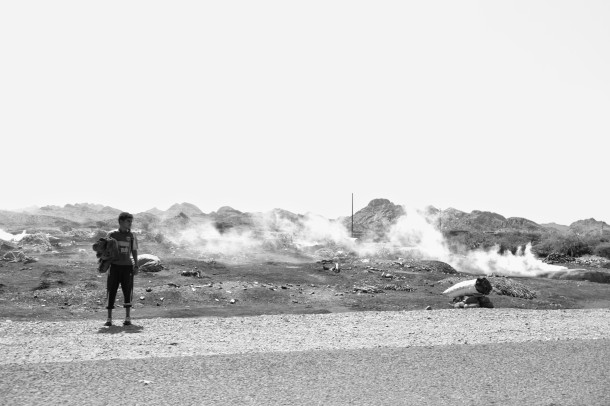 3 thoughts on “Making Charcoal… In Yemen”