This trip was conceived relatively recently, but I never say no to an adventure – particularly one involving my mates Andy Drury and Nigel Green. And so off to France and Belgium we went…

Much of the first part of our tour covered the sites of World War I:

Spanning Europe, Africa, the Middle East and even China and the Pacific Islands, it is difficult to overstate the impact of “The Great War”. Four empires disappeared – the German, Austro-Hungarian, Ottoman and the Russian. Four dynasties, the Hohenzollerns, the Habsburg, Romanovs and the Ottomans together with all their ancillary aristocracies, all fell after the war. Belgium and France were left in ruins.

In addition, a major influenza epidemic that started in Western Europe in the waning months of the war spread around the world and killed at least 50 million people.

Also, the poor conclusion of World War I also set the stage for many other world conflicts – The Bolsheviks seized control of Russia. Out of German discontent with the Treaty of Versailles, Adolf Hitler was able to gain power. The birth of Israel and the continuing Israeli-Palestinian conflict are found in the spoils of World War I as, usually after only cursory consultation with the local population, the political boundaries drawn by the victors of the First World War were quickly imposed. 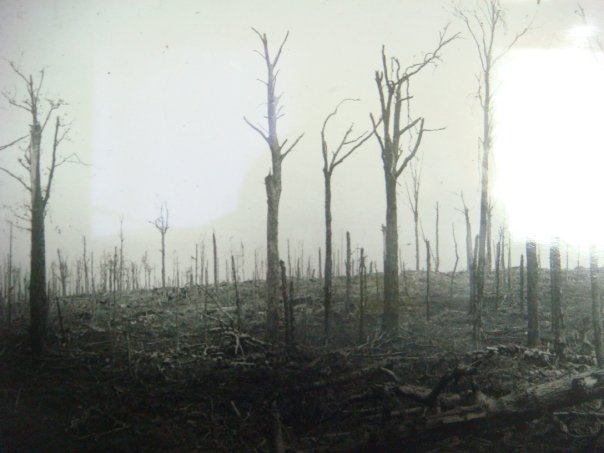 And, of course, what war does not have its war crimes?

Perhaps the most infamous is the campaign of genocide carried out by the Turks against the Christian Armenians, Assyrians and Greeks during the final years of the Ottoman Empire. The exact number of deaths is unknown although a range of 250,000 to 1.5 million is given for the deaths of Armenians.

But let us not forget the rape of Belgium…

In Belgium, German troops, in fear of French and Belgian guerrilla fighters massacred civilians in Andenne (211 dead), Tamines (384 dead), and Dinant (612 dead). On 25 August 1914, the Germans set fire to the town of Leuven, burned the library containing about 230,000 books, killed 209 civilians and forced 42,000 to evacuate.

This is the face of “The Great War”… And, yes, this man is still alive. It’s difficult to even conceive of such suffering. 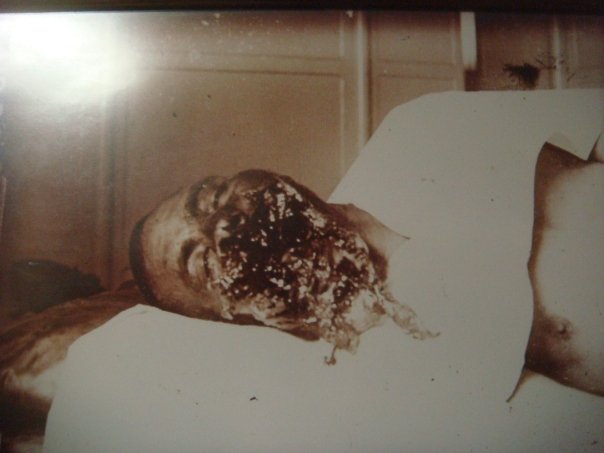 This is the bunker where Adolf Hitler spent his front-line service with the Bavarian Infantrie-Regiment List. 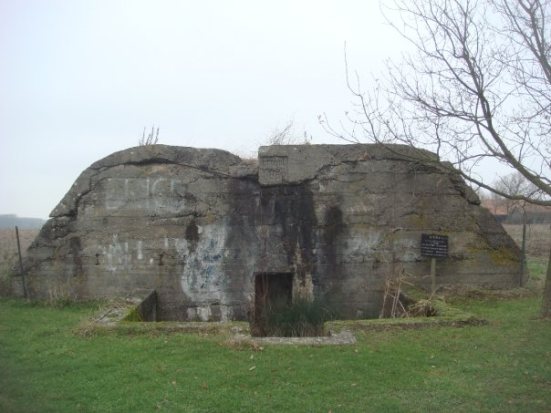 We would have gone inside, even without flashlights, but this water was waist deep and it was literally freezing out there.

Hitler’s rear-line service was spent in a house in the nearby village of Fournes-en-Weppes at No. 1345 rue Froidherbe. A large marble plaque, placed on the home in 1942 by the Nazi government to commemorate his time there, was removed by the home’s owner in 1944, but the fittings can still be seen above the door.

Nigel and Andy pose next to the bunker to give an idea of its scale:

This crater was the scene of one of the largest non-nuclear explosions in history. The 171st Tunnelling Company spent months excavating a tunnel 513 meters long under the German lines and then packed it with 91,000 pounds of ammonal. The ammonal was blown on the 7th of June 1917 and it was said the blast could be felt as far away as London. The crater is 40 feet deep and the diameter of complete obliteration extended 430 feet.

At the time it was called the Lone Tree Crater, but has now had its name changed to Spanbroekmolen or the Pool of Peace.

I had this picture taken to demonstrate the scale of the crater.

It’s amazing how much evidence of World War I is still present. Piles of shells like this (some still live) can be found in the woods or along roads where farmers have plowed them up. 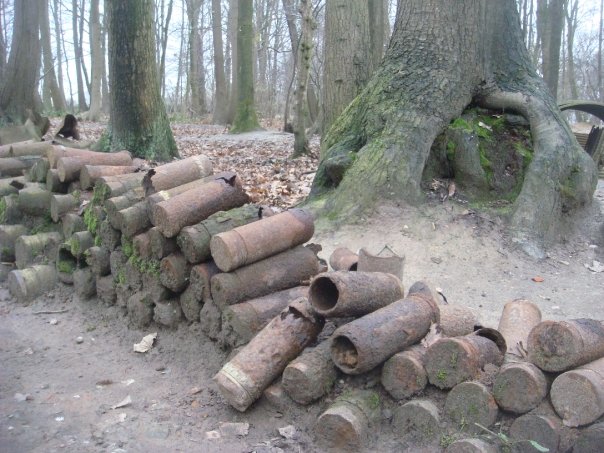 And crater holes still dot the landscape in areas that are not farmed.

The stumps of trees ripped apart by explosions and bullets still fill the forests. 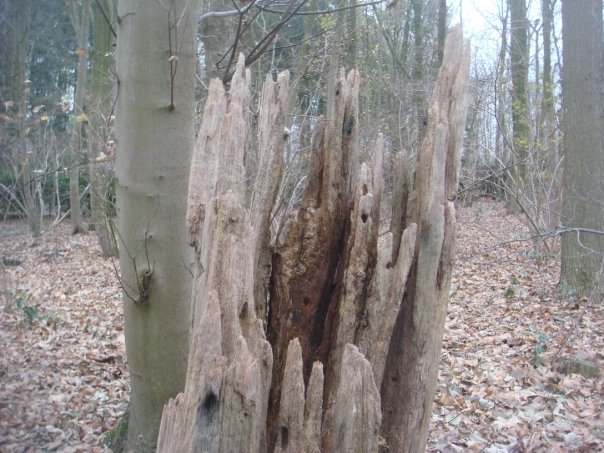 And in some areas, the bunkers and trenches have remained remarkably intact given the time that has passed.

It was pitch black in the bunker above and so I just leaned in and snapped a shot with the flash on – the picture below is the result.

I would love to have explored this tunnel, but without a flashlight or waterproof boots I opted to save this one for next time.

Another remarkably intact trench.  The forests seem to do a good job of protecting the trenches and tunnels.

It looks tranquil now, but this was the scene of horrific fighting.

Ypres, Belgium at the end of World War I: 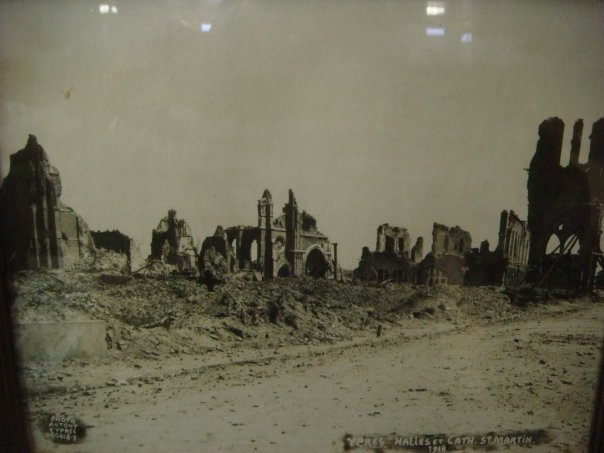 Pictures taken very near the same location in Ypres today: 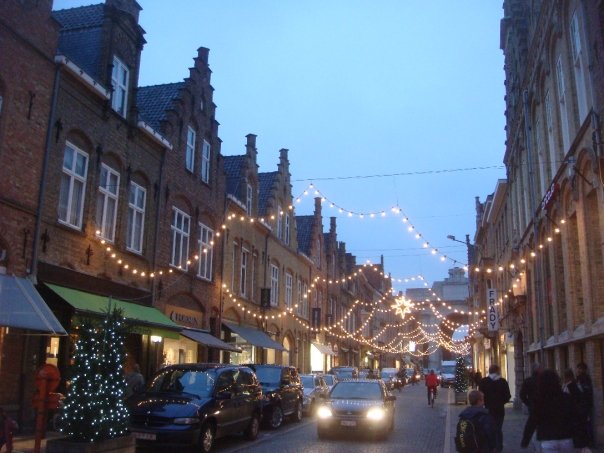 In four great battles around the city of Ypres, over 250,000 British, Canadian, Australian, New Zealand, Indian, Pakistani and South African troops were killed. More than 100,000 of these men have no known graves, of whom 54,896 are commemorated by name on the Menin Gate (those who died before 16 August 1917).

Nigel and Andy search for a name that is on a medal Nigel acquired:

Mindful of this sacrifice, a number of local citizens of Ypres put forward the idea that the Last Post should be played each evening, as a mark of respect and gratitude towards those who had given their lives for the independence of Belgium. The Menin Gate seemed the most fitting location for such a tribute: It was through the Gate that most of the soldiers had marched off to the front, many never to return. More than 80,000 Frenchmen, Americans and other Allies shared the same fate.

Every day of the year since 1928, crowds gather to hear the Last Post being played.

Military cemeteries blanket the landscape of Belgium and France. Tyne Cot, a burial ground for the dead of World War I in the Ypres Salient on the Western Front, is the largest cemetery for Commonwealth forces in the world, for any war. 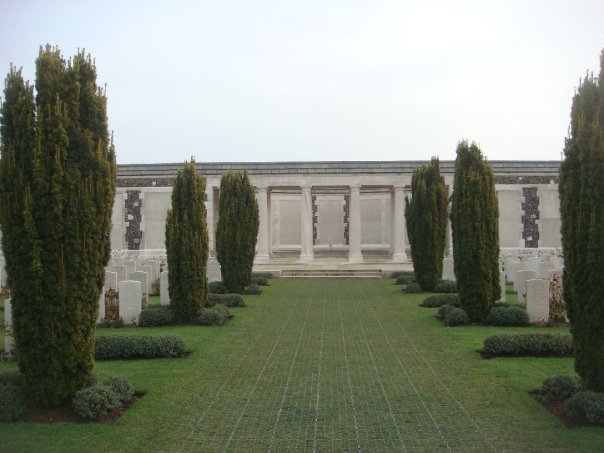 The majority of the graves in the cemetery are marked in this manner:

Graves stretching to the horizon. 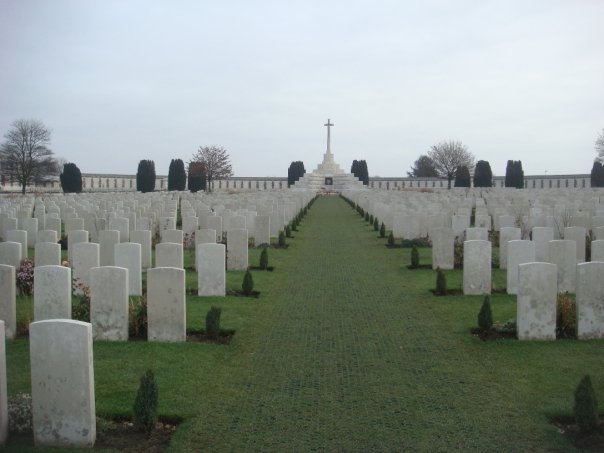 Despite the somber setting, I still had to be myself and climb to the top of the memorial. 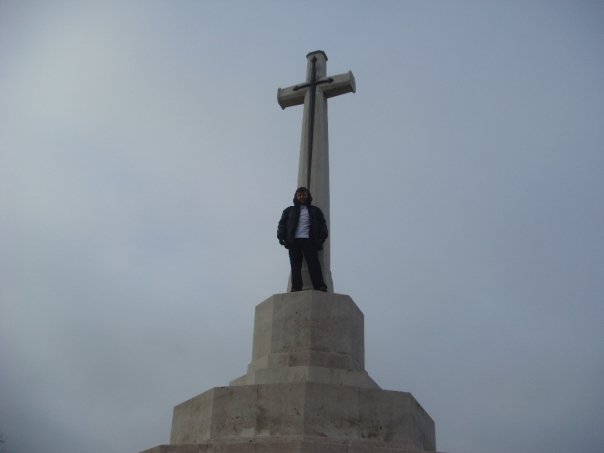 Bent double, like old beggars under sacks,
Knock-kneed, coughing like hags, we cursed through sludge,
Till on the haunting flares we turned our backs
And towards our distant rest began to trudge.
Men marched asleep. Many had lost their boots
But limped on, blood-shod. All went lame; all blind;
Drunk with fatigue; deaf even to the hoots
Of tired, outstripped Five-Nines that dropped behind.

Gas! Gas! Quick, boys!– An ecstasy of fumbling,
Fitting the clumsy helmets just in time;
But someone still was yelling out and stumbling
And flound’ring like a man in fire or lime…
Dim, through the misty panes and thick green light,
As under a green sea, I saw him drowning.

In all my dreams, before my helpless sight,
He plunges at me, guttering, choking, drowning.

If in some smothering dreams you too could pace
Behind the wagon that we flung him in,
And watch the white eyes writhing in his face,
His hanging face, like a devil’s sick of sin;
If you could hear, at every jolt, the blood
Come gargling from the froth-corrupted lungs,
Obscene as cancer, bitter as the cud
Of vile, incurable sores on innocent tongues,–
My friend, you would not tell with such high zest
To children ardent for some desperate glory,
The old Lie: Dulce et decorum est
Pro patria mori.

Wilfred Owen was killed in action on 4 November 1918 during the crossing of the Sambre-Oise Canal, exactly one week (almost to the hour) before the signing of the Armistice. His mother received the telegram informing her of his death on Armistice Day, as the church bells were ringing out in celebration.

6 thoughts on “The Dynamics of Death Tour – Part 1”