With the weight of extra neutrons, heavy-water ice will sink to the bottom of a beaker filled with ordinary H20. 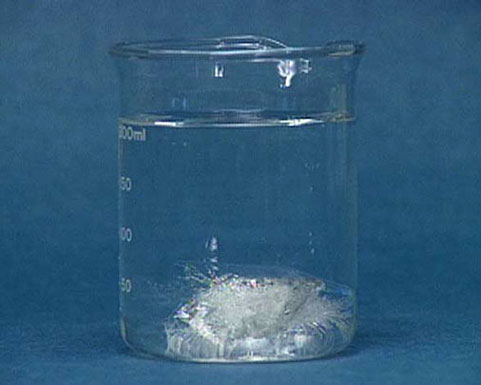 How is it Used in Nuclear Power Plants?

Nuclear power plants harness the energy of countless atoms of uranium splitting apart, or fissioning, in a chain reaction. Heavy water can help keep such a chain reaction going. As each uranium atom breaks apart, it shoots out neutrons that can go on to split other atoms. But the neutrons are much more likely to trigger new fission events if they are slowed down. Like traffic cops, heavy water’s deuterium atoms effectively curb the pace of neutrons without capturing them.

Nuclear reactors that use heavy water can employ a form of uranium commonly found in nature (U-238) rather than requiring so-called enriched uranium, which contains a higher percentage of easily split uranium atoms (U-235) but is expensive to produce.

Heavy-water nuclear reactors generate electricity in China (above), Canada, and India. No commercial plants in the U.S. use heavy water.

Why Can it be Dangerous?

In its natural state, common uranium (U-238) can’t generate destructive nuclear explosions. It either must be enriched—made more concentrated in a rare form of uranium (U-235)—or converted into plutonium (Pu-239). Heavy water can play a role in breeding weapons-grade plutonium from common uranium. In a heavy-water nuclear reactor, when neutrons bombard U-238, some uranium atoms absorb an additional neutron and are transformed into Pu-239.

On the eve of World War II, scientists both in Germany and Great Britain realized that heavy water could be used in this way to make nuclear weapons. And because this potential still exists today, the International Atomic Energy Agency and various national governments monitor the production and distribution of heavy water.

Heavy water provides a path to turn common uranium into plutonium, one of the easily split or “fissile” materials that fuels nuclear bombs. 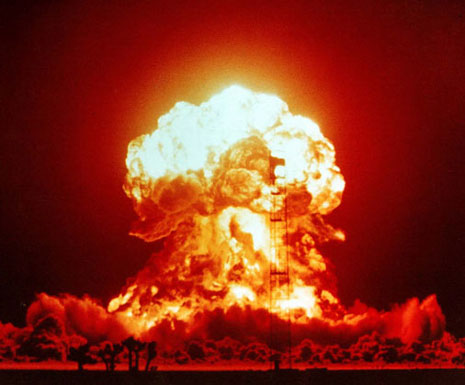 Which Countries Make It?

When Norsk Hydro began producing heavy water in 1934, Norway became the first country with a commercial heavy-water plant. The Nazi invasion of Norway in 1940 transferred control of the plant—and most of the world’s heavy water—to Germany. In the early 1940s, Allied countries joined the race for heavy water, and by 1944, the Manhattan Project had made 20 tons of the precious liquid, more than enough to fill the first heavy-water nuclear reactor.

America’s atomic weapons program ultimately relied more on graphite than on heavy water in nuclear reactors, but the United States has continued to produce heavy water for military use ever since the ’40s. Today, Canada and India, which both rely on heavy-water nuclear power plants for electricity, make the most heavy water. Other countries with heavy-water production facilities include Argentina, Iran, Romania, and Russia.

Satellite images taken in February 2005 reveal a heavy-water plant in Arak, Iran. Iran claims the facility will help the country produce electricity, not plutonium for bombs.

How Was it Discovered?

In 1913, chemists Arthur Lamb and Richard Leen at New York University tried to find a definitive value for the density of pure water, but despite meticulous experiments, they kept getting varying results. Their “failure” was, in retrospect, important evidence for the existence both of heavy water and of isotopes—atoms of an element that have the same number of protons but a different number of neutrons and, therefore, different weights. That same year, independently, the notion of an isotope was proposed for the first time.

By 1931, the existence of isotopes was firmly established, and Harold Urey at Columbia University, together with colleague George Murphy, first glimpsed hydrogen’s heavier isotope deuterium using a technology called spectroscopy. They later distilled deuterium from liquid hydrogen, clinching proof of its existence. Urey won the Nobel Prize in Chemistry in 1934 for discovering deuterium, the key component of heavy water.

How is it Made?

Heavy water is naturally present in ordinary water, so it’s more accurate to speak of “isolating” rather than “making” it. Separating out significant quantities, though, is no easy trick because heavy water constitutes only one part in 4,500. Gilbert Lewis isolated the first samples in 1933 using electrolysis—sending an electric current through water to separate it into its elements. His technique relied on the fact that H20 breaks apart more readily than D20, and the residual water left after electrolysis is relatively rich in D20. By reprocessing the residual water over and over again, he could eventually purify heavy water. With his lab equipment, however, Lewis’s process was time-consuming and expensive.

Norsk Hydro, which already used electrolytic cells in the early 1930s to make fertilizer, seized the chance to make heavy water on an industrial scale. By 1935, the Norwegian company was shipping heavy water to scientists throughout Europe who wanted it for physics, chemistry, and biomedical research. Today, heavy water is isolated in a variety of ways, including a distillation method akin to making brandy from wine. Other methods exploit the different affinities that deuterium and hydrogen have for various compounds.

After the Nazis took control of the Norsk Hydro plant in 1940, they expanded the number of electrolytic cells from nine to 18, doubling the plant’s production of heavy water. 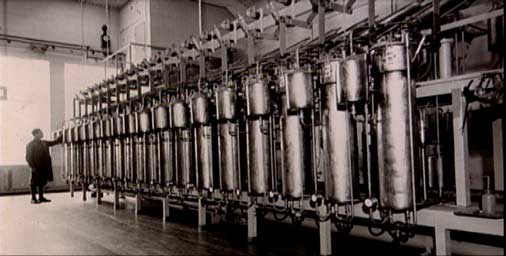 2 thoughts on “What is Heavy Water?”