It has been a while – too long – since Team Ames and Team Boers pursued an adventure together. So, it was with great pleasure that I, accompanied by my Italian, met up with Brandon and Amanda in Brazil.

I’m a big fan of bees… and honey. Turns out my close family has the same feelings. And guess what? We happen to have a flock of quasi-family members (definitely family in spirit) in Brazil and one of them, Bruno, raises bees.

Here’s a picture of Bruno discussing the finer points of bees and beekeeping with us before we venture into the jungle to check on some of his hives:

These are some of the hives we were going to check out – photographed from a distance as we were not wearing any protection:

Time to suit up and go in. But, not before mixing up a batch of smoke. Below, Bruno is scooping rice husks into a smoker which we will use on the bees. Wafting smoke over bees triggers an instinct for them to go on a honey binge which has the effect of pacifying them (only somewhat though, as I would later discover). It makes sense if you think about it because in the wild if a bee detects smoke, it likely means that their honey supply is about to go up in flames.

Bruno explained that one needs to use cool smoke on bees. “Cool” smoke can be obtained from burning material such as the rice husks he uses. We were advised that “hot” smoke is worse than using no smoke at all. 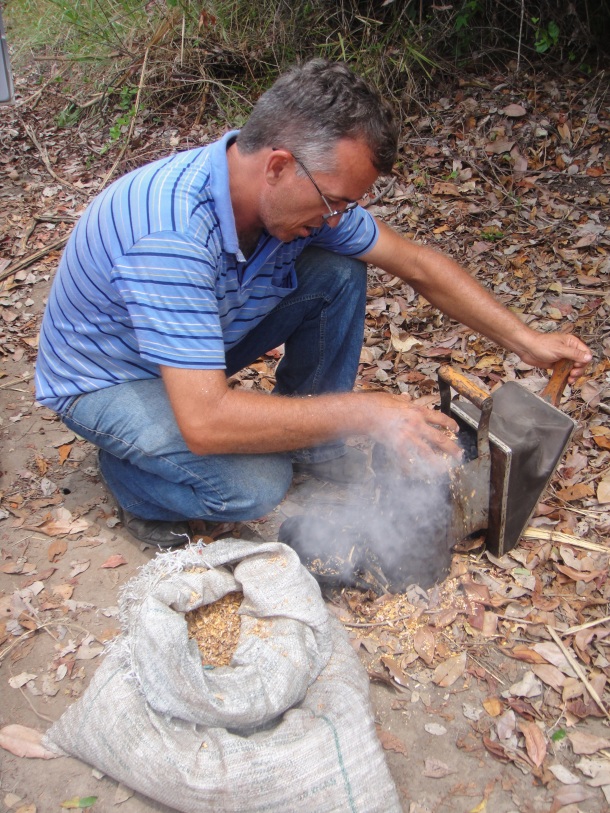 I volunteered to go in first.

This is what it looks like when heading in to do battle with the killer bees (even if this picture is of Brandon).

The first step is to smoke the crap out of the bees, thus triggering the honey binge response.

And heading in for a honey feast… These are all worker bees and are, therefore, females. The worker bees live for just 50 days while the queen will live for 3 to 4 years.

Here, Bruno is pointing to Red Propolis at the entrance to the hive:

What the hell is Red Propolis? I’d never heard of it before either, but supposedly it is just found in Brazil, particularly in the state of Alagoas, and has all sorts of fantastic qualities such as protection against harmful bacteria, viruses and fungi.

Specifically, Propolis is plant resin collected by bees for use in and around the hive. In plants it is usually the sticky coating around buds that serves to protect them from the elements of weather plus from attack by bacteria, fungi, molds, and viruses. These are properties that are useful to the bees – particularly during the rainy season – and are enhanced by the sticky properties of the Propolis.

Hundreds of chemical compounds are alleged to have been identified from Propolis – chief among these are flavonoids, phenolics, and various aromatic compounds. Propolis also contains some volatile oils, terpenes, and beeswax.

Flavonoids are well-known plant compounds that have antioxidant, anti-bacterial, anti-fungal, anti-viral, and anti-inflammatory properties. Other properties of Propolis include acting as a local anesthetic, reducing spasms, healing gastric ulcers, strengthening capillaries, treating eczema and Propolis has even shown promise in treating Staph as well as certain types of cancer.

Here’s another example of Red Propolis that Bruno is exposing after opening up a hive:

The white tube to the left is what Bruno uses to feed the bees during winter.  He fills an empty soda bottle with a solution of 5% honey and 95% water and then flips it upside down on this tube. 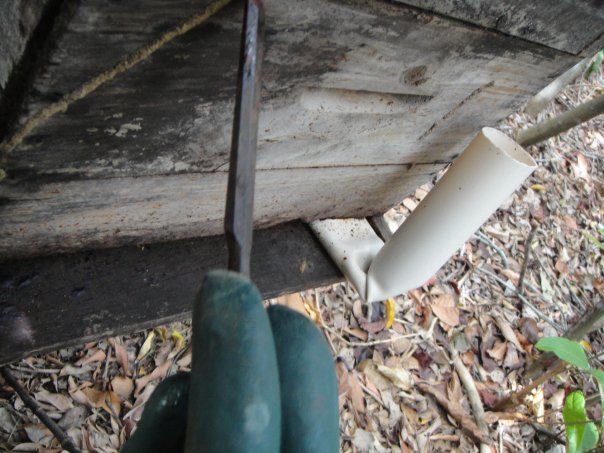 These panels inside the hive serve as a building block on which the bees can construct honeycombs.  Apparently, the ideal temperature for the hive is between 34 and 36 degrees Celcius.  If it gets too hot, the bees will cluster outside the hive to cool down. 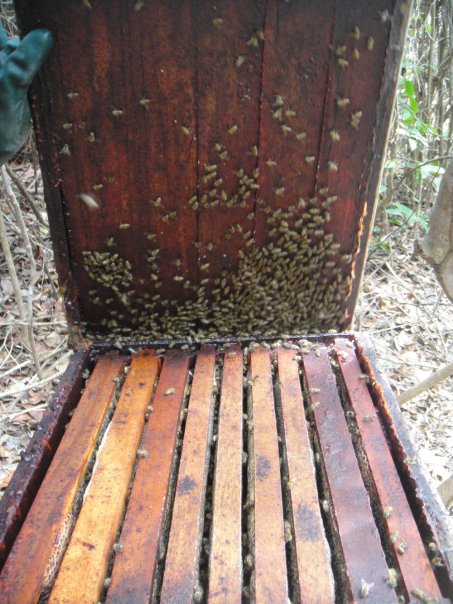 Here is a look at some of the components inside the hive. On top are a number of developing larvae and lower down are pockets of honey: 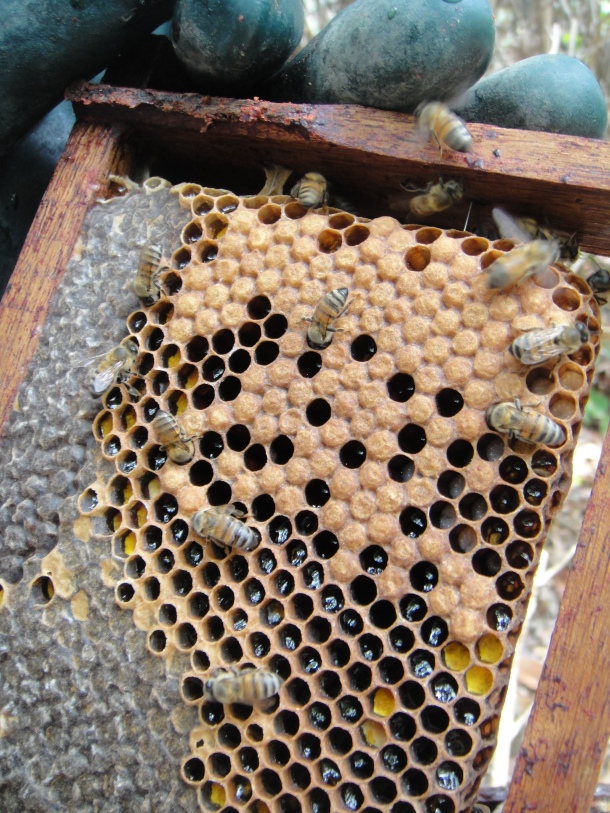 This is one of the few males one will find inside a bee hive – a drone. In this case it is the larva of a drone:

I took this picture after Brandon and I had already gone in and disturbed the bees. They were starting to get really pissed off by now and I am, in fact, seconds away from needing to run after taking this picture.  As I was retreating, a bee ended up stinging the hat I was wearing.

Unbeknownst to me at the time, when a bee attacks a target, it leaves a heavy dose of marking pheromones behind to guide other bees in for the attack.  So, in this case my hat was covered with attack pheromones.

So, when I ventured back in to the jungle to take some pictures of my Italian handling the bees – and by now this was the fourth time that someone had gone in to disturb the bees as I went first and then Brandon, Amanda and lastly Eleonora – it did not go so well.  The bees were extremely pissed off after their fourth disturbance and what better way to vent their frustration than on a target already drenched in attack pheromones?  They started attacking me immediately and after being stung on the top of my ear and on my neck (both close to the hat), I set off on a determined run for the nearby sugar cane fields (See below).

This is where the differences between Africanized “killer” bees and the European honey bees (the Italian bees to be specific) we have in the States became readily apparent.  The killer bees are damned persistent and I found myself running in circles around the sugar cane field wondering when the hell the girls were going to chill out and give up… The answer?  Not before stinging me several more times.

I owe Brandon a beer too because at one point I ran past him at which time one of the killer bee girls detached herself from pursuing me and took the opportunity to sting him on the arm. 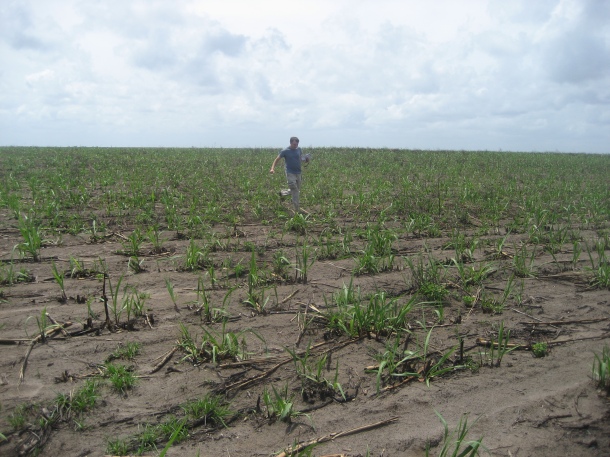 After the pain and sweat, there is a reward at the end though and this is it: 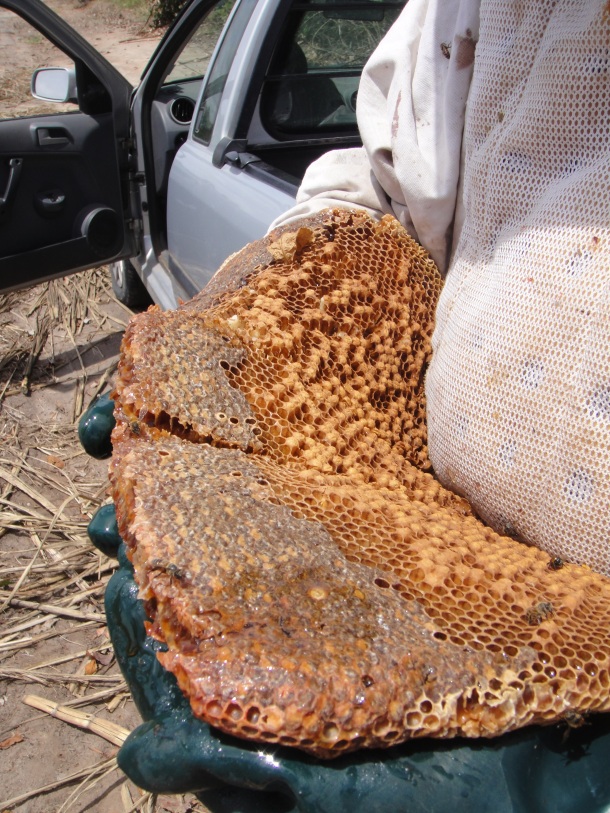 Back at our temporary home in Lagoa Azeda and dumping the crumbled honeycomb into a strainer to separate out the pure honey:

You can also eat the honeycomb directly as shown below.  It tastes like a chewy candy. 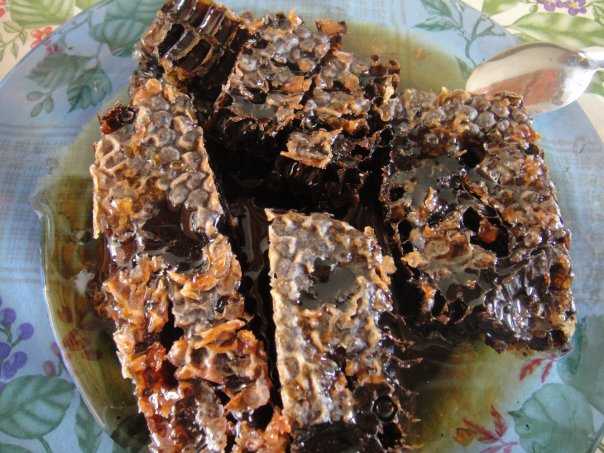 Observant readers will notice that this honey appears to be rather dark.  And they’re right.  This is sugar cane honey and sugar cane honey is dark.  Sugar cane does not have flowers, instead the bees consume the resin that is left on the sugar cane after it has been burned.

The dark color of the honey comes from minute amounts of the sugar cane ash – you can’t taste it – inside the honey (which is supposed to make it more nutritious). 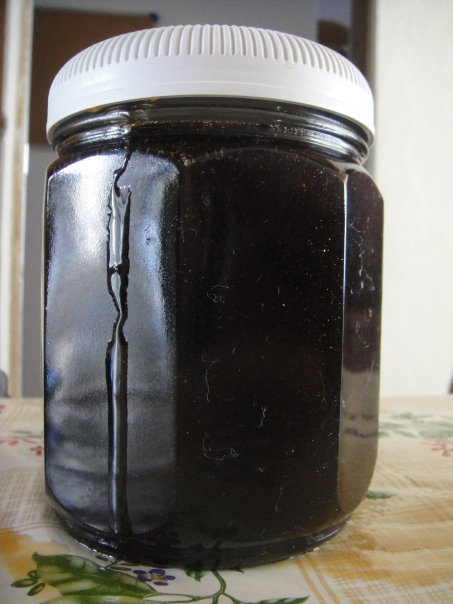 Here is a side by side comparison of the light-colored traditional honey (gathered from flowers) with the darker sugar cane honey:

No shit!  I can’t tell you exactly what it says, but you get the idea.  Brandon and Amanda discovered this sign as we were winding down our operations in nearby Lagoa Azeda and I was recovering from my killer bee stings: 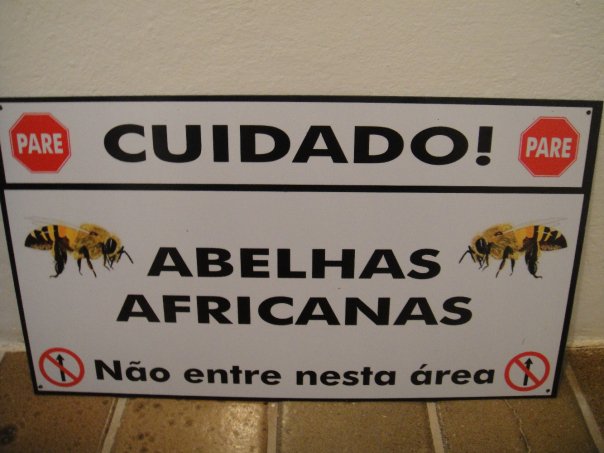