Now, anyone that knows me knows that I generally like animals even more than people.  So, trust me when I relay that no animals were harmed in the following production…

Still casting about for activities to kill time around Peshawar as we waited for the Khyber Pass to be opened again, Prince suggested that he take Andy, Nigel and me to a fighting match between chickens out in the countryside.

As we were driving to our destination, Prince explained that the tradition of bird fighting in Pakistan and Afghanistan stretches back for thousands of years.  However, the bird fighting in this part of the world is not like that which has been condemned in the West.  In the West, the birds are fitted with blades over their spurs and literally slash and hack each other to death.  This is not the case in Pakistan and Afghanistan.  Instead, it is more like a wrestling match.  There are no blades and the fight is stopped as soon as one bird submits to another.

Two roosters squaring off against each other: 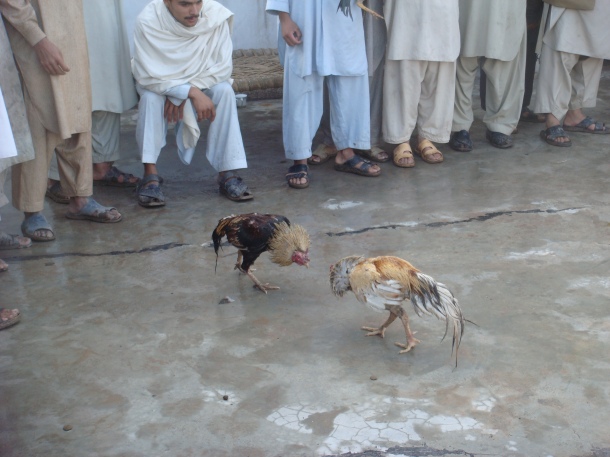 Essentially the roosters push each other around a bit and try to intimidate the other by fluffing up their feathers, trying to jump on the back of their opponent and other such tricks that should be familiar to anyone who has witnessed children involved in schoolyard fights.

Eventually, one of the roosters will decide that he is not as tough as his opponent and he will then adopt submissive behavior such as bowing his head or placing himself low to the ground.  At that point the fight is stopped and the roosters are separated.

The dance of combat:

This rooster below was called Muhammad Ali.  However, he did not fight.  He was so big, so strong and such a talented fighter that no one would go up against him.  So, he was just brought to show off:

Below, you can see two roosters doing their combat dance.  In the background, Mr. Ali has taken notice of the fight and is seconds away from rushing in to interrupt and have his share of combat before being snatched up and removed from the fighting:

This was the overall winner of the day (excluding Mr. Ali, of course):

And below are some of the other participants… As you can see, all are alive and none are the worse for wear. 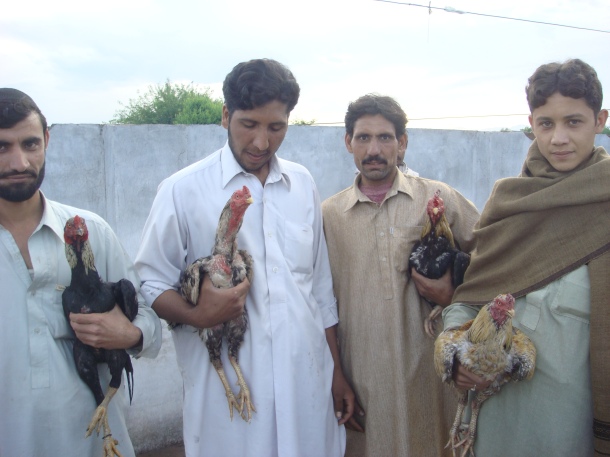 At some point one of the bystanders asked us what we thought of the proceedings. I don’t recall our response, but it elicited the declaration that we should see duck fighting…

At this point the surrounding Pakistanis weighed in with their own solemn convictions that duck fighting was indeed a vicious, barbaric affair.

These are guys that walk around with AK-47s and have seen absolutely hellacious fighting in their lives – either fighting against the Soviet Union in Afghanistan or for or against the Taliban in both Afghanistan and Pakistan. And here they are standing around with very serious faces telling us of the savagery of duck fighting. The whole idea seemed absurd.

I was convinced they were having a laugh at our expense. However, after bringing it up in several conversations in Pakistan and Afghanistan and meeting the same response every time, I have to conclude that it really must be a brutal affair.

Who would have thought?

4 thoughts on “Bird Fighting in Pakistan”