Visiting a cemetery may sound rather dull to some of you, but nothing is in Haiti…

The Grand Cemetery of Port-au-Prince (or Grand Cimetiere De Port-au-Prince in French) is a vast necropolis of raised tombs that sprawls across a large section of the downtown area: 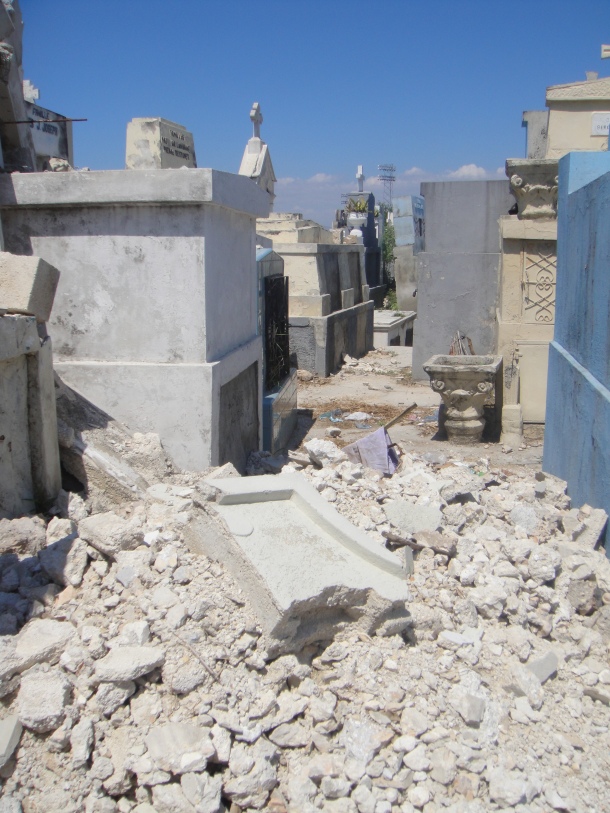 We were told by the Haitians that the Grand Cemetery is hundreds of years old:

As you can probably tell from the above pictures, the Grand Cimetiere De Port-au-Prince was not spared from the destructive powers of the 2010 earthquake. Nevertheless, life goes on – even in a cemetery – and the population of the cemetery has grown substantially since the earthquake.

And when I use the term population, I am referring both to the living and the dead residents of the cemetery. Yes, there is a large (and living) population of Haitians residing in the cemetery. The tombs frequently offer superior shelter to what can be found outside the Grand Cimetiere and as long as one doesn’t mind sharing their bedroom with human remains, they make solid homes. We saw Haitians eating, sleeping, drinking, shitting, pissing and even fucking in the tombs. So, obviously, the Haitians are comfortable with the cemetery lifestyle and I suppose it offers a commentary on the resiliency of life: 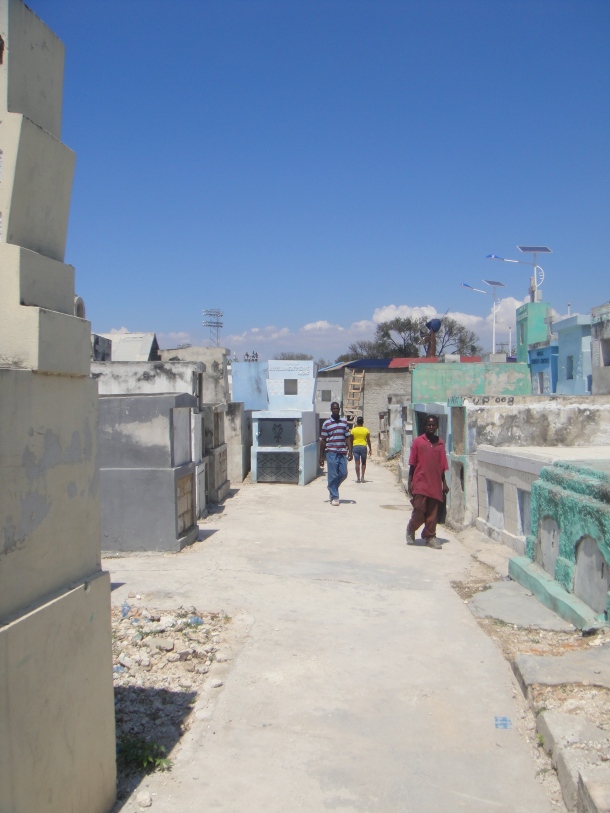 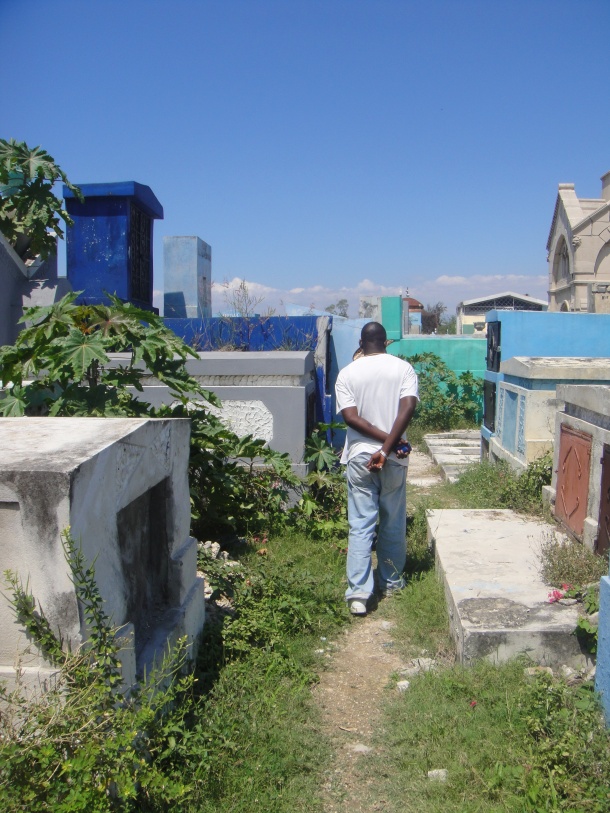 Space is at a premium in the cemetery and all too often the dead present an obstacle to the living. Thus, to make more space in the tombs, the coffins of the dead are often doused with gasoline and set alight in order to free up space. It is, therefore, not uncommon to peer into a tomb and to see charred bones scattered about or tossed out onto the ground.

This is, of course, in addition to the bones of those dead who were unceremoniously cast out onto the ground without the dignity of being burned or residents who were killed by collapsing tombs (a form of poetic justice?) during the 2010 earthquake: 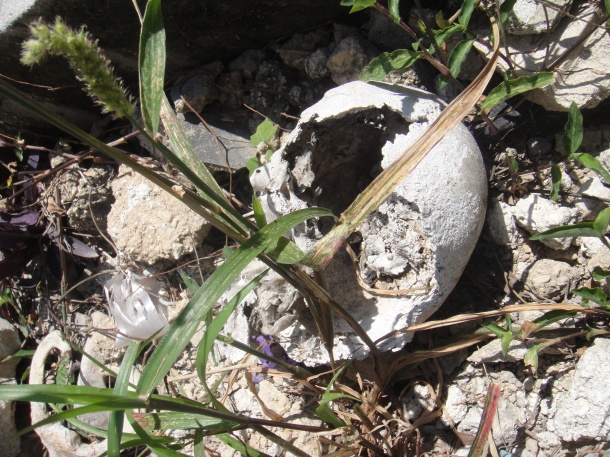 The (living) population of the cemetery has grown so large, in fact, that a church has been established to administer to the spiritual needs of the residents. This is the church from the outside:

And here is a picture of a service taking place within:

Interestingly, right next to the church, is a large area dedicated to the practice of Voodoo (known as Vodou in Haiti).

Now, I don’t know a lot about Voodoo and I’m not going to pretend that I do. However, there’s more to this blend of traditional African religions and Catholicism than witch doctors, child sacrifice, zombies and black magic. I’ll explain the basics that I picked up from the Haitians, but rather than struggle to explain beyond what I’m confident I clearly understood, I’ll just relay to you what I observed.

So, what the Haitians explained to me… Followers of Voodoo believe in one God, Bondye or Gran Met (Great Master), whom they worship. However, this supreme being is seen as unreachable from our physical plane of existence. So, lesser spirit entities called Iwa are recruited in ceremonies to serve as a sort of vessel for communication with the Great Master/God. Summoned through prayer, song, drumming and dance, the Iwa spirits help followers in their journey to the divine. During ceremonies, the Iwa supposedly allow these individuals to experience absolute communication with God and their ancestors. Iwa possession typically manifests itself in song, dance, the offering of advice or the healing of illnesses.

The two most important Iwa figures in the Grand Cimetiere are Baron and Maman Brigitte. Baron, also known as Baron Samedi, is the master of the dead and keeper of cemeteries (hence his popularity here). His alleged powers are equally responsible for the procreation of the living (Ahhh! That’s why we saw so many people having sex in the cemetery) and the rotting of the dead. Often depicted as a swaggering skeleton with a top hat, cane and purple cape, offerings to the Baron include black roosters (sacrificed), rum, black coffee and cigars.

The wife of Baron is Maman Brigitte and she is said to have similar restorative powers to her husband, but is said to be more of a potty mouth and is known for her sexually suggestive dances. Offerings for her are the same as those for her husband, Baron.

Below is a site where many Voodoo rituals take place. The Haitians in the area treated this site with great reverence and a number of burnt offerings were scattered about the base. And I must confess that it did have a sinister feel to it:

A Voodoo mural in the Grand Cemetery depicting some of the Iwa… Old beer bottles left behind from late-night offerings to Baron Samedi and Maman Brigitte littered the ground just outside the frame of this picture: 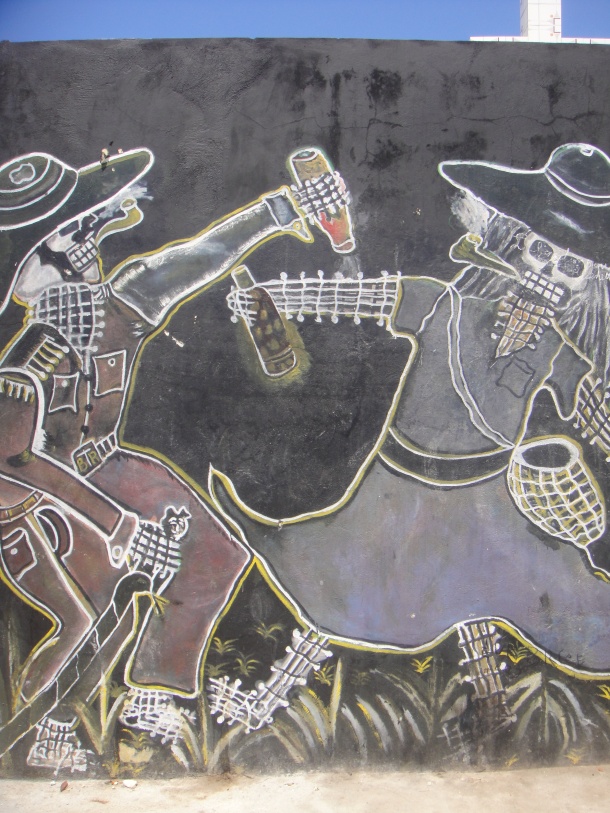 This was an additional site of significance within the cemetery to the practitioners of Voodoo. During the time that we were loitering in this area, I saw several Haitian men approach this site and bow repeatedly to the inscription on the ground, while mumbling to themselves in a low-grade equivalent to speaking in tongues:

Also of Voodoo interest is the nearby tomb of “Papa Doc” Duvalier, who very consciously portrayed himself as an incarnation of Baron. Papa Doc was buried here in 1971, but fifteen years later during the violent reaction against Duvalierism, his tomb was ransacked in order to desecrate his body. However, his coffin had mysteriously disappeared and his final resting place remains unknown. Below is the tomb as it appears today:

The sight of coffins that had been dragged out of tombs and smashed open was fairly common. Whether this is done simply to make more space in the tombs without the hassle of burning the coffins and contents or whether these are attempts at grave robbery, I do not know:

As I mentioned above, the Grand Cemetery of Port-au-Prince was not spared from the earthquake. Broken tombs littered the cemetery before the earthquake, however, the damage is far more extensive now and many of the more opulent tombs collapsed:

Or have been badly damaged:

Frequently, the piles of rubble evolve into mere rubbish piles or lavatories for the cemetery’s living residents: 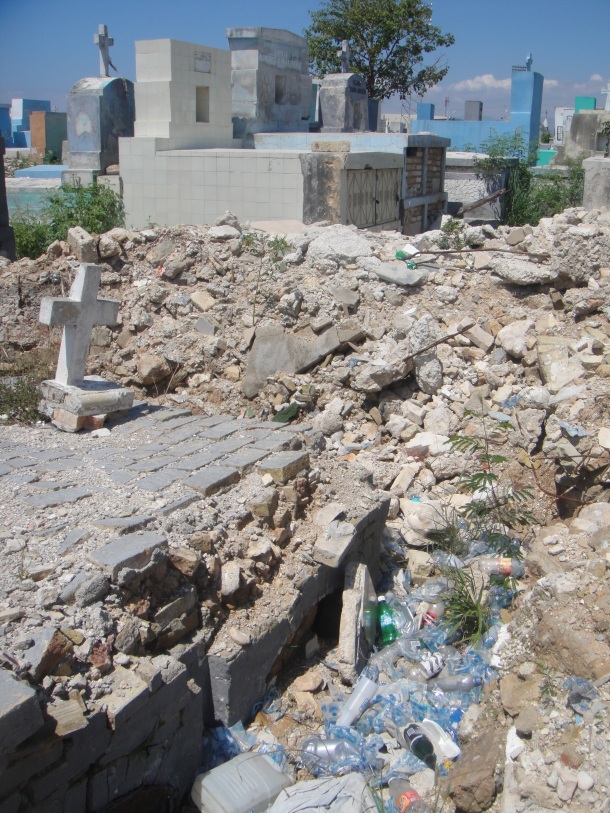 The Grand Cemetery is a fascinating and weird place…

8 thoughts on “Visiting The Grand Cemetery Of Port-au-Prince”