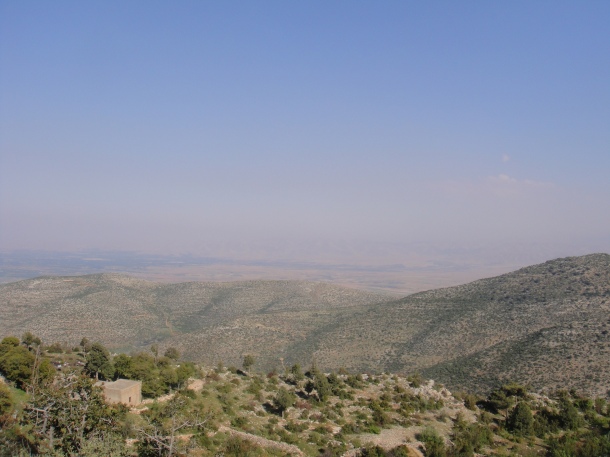 Despite its name, the Bekaa Valley is actually a high plateau between the Mount Lebanon Range and Jebel Libnan ash-Sharqiyya (Anti-Lebanon Range).  For thousands of years the Bekaa Valley, called “hollow Syria” by the Greeks and Romans, was a corridor linking the Syrian interior with the coastal cities of Phoenicia.  The many invading armies and trading caravans that passed through left traces of their presence, which can be seen in a host of small sites across the valley, but most magnificently at the Umayyad city of Aanjar and the remarkable temples at Baalbek.

Dropping down into the Bekaa Valley from the mountains far in the north of Lebanon:

Not an uncommon road hazard in the Bekaa Valley… Are they goats or sheep?

Leaving the hills behind:

This is your editor standing against a background of the northernmost stretch of the Bekaa Valley… The Syrian border is in those hills just behind me. Armed Islamists, smugglers and Syrian rebels mix freely along the porous border which is stitched by roads, motorcycle paths and foot trails.

The smugglers carry contraband fuel, cigarettes and anything else that can wrangle a profit from imbalances in Syrian subsidies and Lebanese taxes: 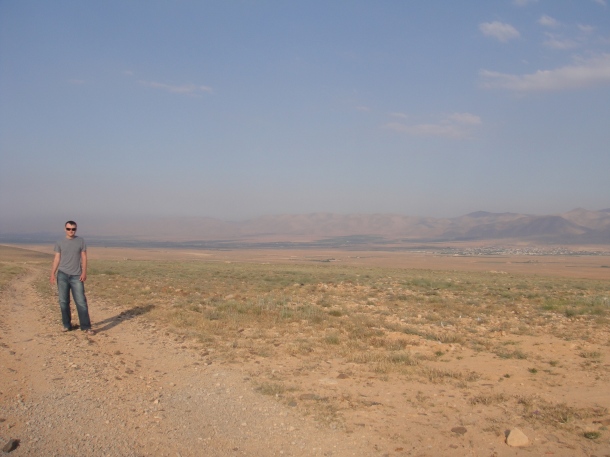 The Bekaa Valley was once the center of Lebanon’s hashish production. Throughout the civil war years, an estimated 10,000 tons of hashish were exported from Lebanon each year, a lucrative $500 million annual trade controlled by a cartel of just 30 Lebanese families.  When Syria arrived in Lebanon, it got in on the act too, and used its tanks and artillery to protect the marijuana fields.

In a bid for American respect around the time of the first Gulf War, Syria attempted to put an end to the industry, encouraging farmers to instead cultivate tomatoes, tobacco, potatoes and grain.  The new produce, however, could not compete with cheaper Syrian goods; farmers’ incomes plunged and, unsurprisingly, some returned to their former, more lucrative trade.  During the 1990s, Lebanese government crackdowns resulted in hashish crops being bulldozed, further injuring the industry and leaving some farmers destitute.

As a result of recent instability and the 2006 war, however, Lebanon’s government has turned its attention to other fields, and the Bekaa Valley’s are flourishing once more.  According to the Lebanese we spoke with, 10 kilos of hash can yield a farmer $10,000, a sum unthinkable for any other crop.  Most production is hidden away in the north of the Bekaa Valley, so one is unlikely to spot it while on the road.  Though officially disapproved of by Hezbollah, the organization turns a blind eye to an industry that supports one of the country’s otherwise poorest regions, where farmers truly profit from being green-fingered.

And speaking of Hezbollah, they make their heavy presence in the valley felt as soon as one enters: 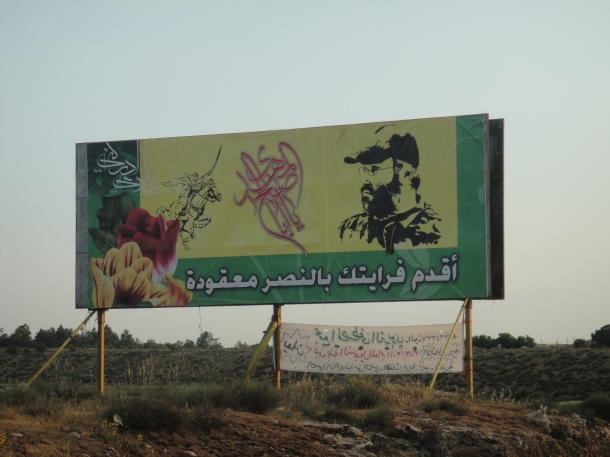 The Hezbollah business empire also extends into the drug trade. The Bekaa Valley, Lebanon’s central agricultural heartland, is controlled by Hezbollah and serves as a major center for growing poppies and cannabis and for producing heroin from raw materials arriving from places like Afghanistan and the Golden Triangle of Southeast Asia. Indeed, Hezbollah controls a commanding percentage of the estimated $1 billion drug trade flowing out of the Bekaa. Much of the hashish and heroin emanating from there eventually arrives in Europe, where Hezbollah members also are involved in smuggling, car theft and the distribution of counterfeit goods and currency.

The Bekaa Valley has always been an agricultural region, fed by the Nahr al-Aasi (Orontes River) and the Nahr Litani (Litani River).  In Roman times, this grain-producing area was one of Rome’s “breadbaskets”.

A view of some of the farms in the Bekaa Valley: 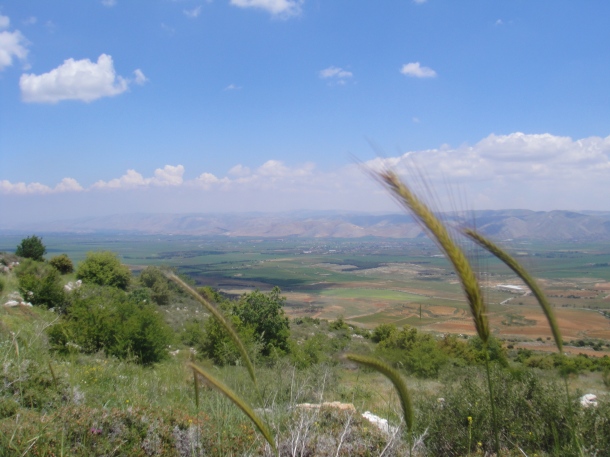 A favorite meal of ours in this cornucopia – bread, hummus, olives, mint, Shish-Daoul, Bekaa Valley peaches:

Today, even though deforestation and poor crop planning have reduced the fertility of the land, the valley’s wines are famous throughout the region and are gaining global renown.

Chateau Kefraya is Lebanon’s largest wine producer… Not far from the town of Zahle, this winery has won dozens of prizes worldwide and many awards for its Lacrima d’Oro, a fortified white wine:

The Litani River mentioned above allows this lake – Lake Qaraoun – to exist… The Litani is the longest river in Lebanon – it starts in the north of the Bekaa Valley, near Baalbek, and flows into the sea near Tyre:

As you can probably tell, the valley becomes greener as one proceeds south.

No matter which way one proceeds in the Bekaa Valley, one will encounter many checkpoints:

Some scenes from driving throughout the Bekaa Valley: 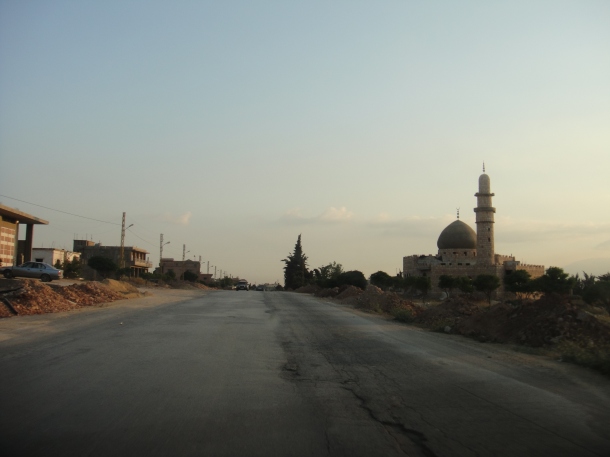 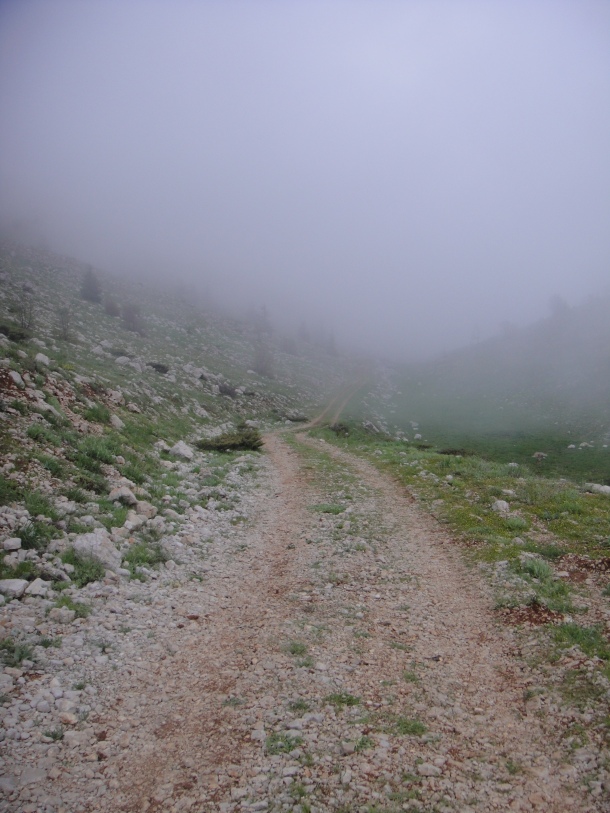 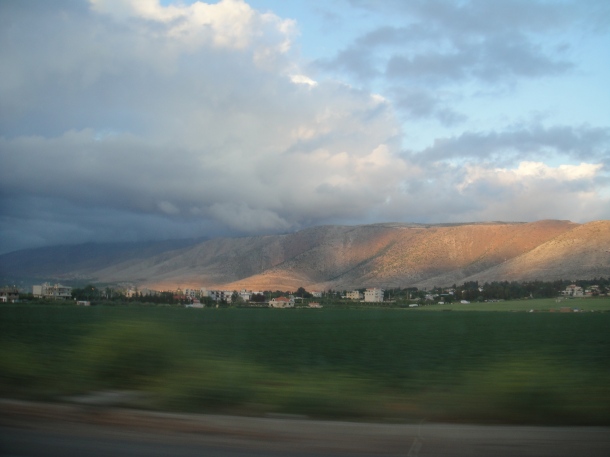 Sunset on the Bekaa Valley:

5 thoughts on “The Bekaa Valley”