At the foot of the Judaean Mountains, along the western shore of the Dead Sea, can be found the Ein Gedi Oasis.

Ein Gedi is fed by several springs which flow through two canyons, Wadi David and Wadi Arugot. The springs are, in turn, fed by rain that falls in the Judaean Mountains which, after having been absorbed into the water table, flows underground towards Ein Gedi where it emerges as you will see below.

One’s first views of Ein Gedi will likely be of these imposing cliffs:

But, by moving up the canyons, one can penetrate deeply into Ein Gedi:

Now, of course, some are more interested in hedonism than exploration and they do not make it far into Ein Gedi before seeking relief from the heat and indulging themselves with a plunge into Ein Gedi’s pure, cool waters: 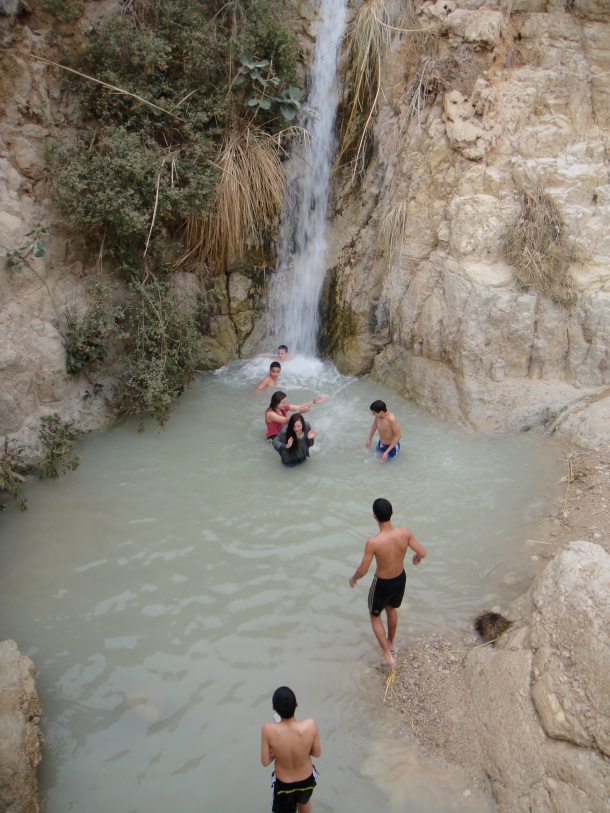 There’s nothing wrong with that, but we at The Velvet Rocket are more dedicated to suffering for the sake of exploration.

Thus, we headed up Wadi David:

I should mention that the lighting in these pictures may seem slightly odd. This odd light is the result of the light from the sun being filtered through a massive sandstorm blanketing the Dead Sea region on this day of our visit. 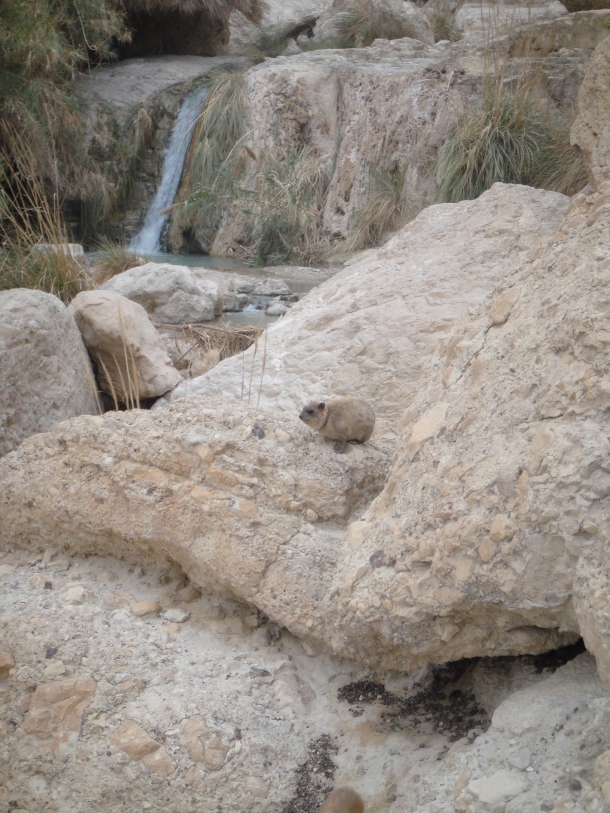 Ein Gedi’s water, found in the heart of one of the most arid places on the planet, attracts a great deal of wildlife – such as these rock hyraxes in the pictures above and below: 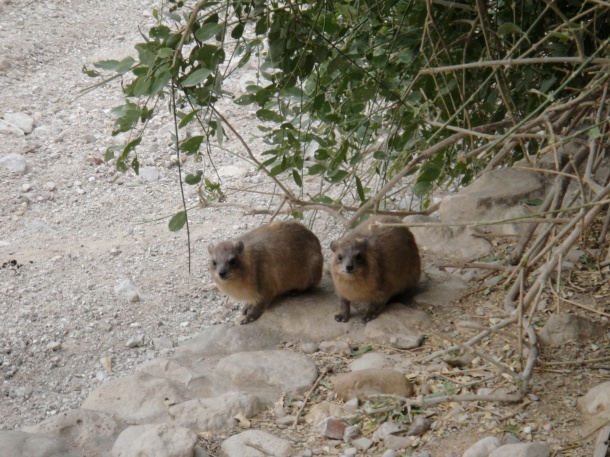 As Ein Gedi’s waters are concentrated in a small area, the wildlife is forced to concentrate in this small area as well. The result is that everywhere one looks, a wild animal will almost certainly be on display. These rock hyraxes, such as this one feeding in a tree, are probably the most common fauna in the area:

The rock hyraxes are far from the only wild animals to be found taking advantage of Ein Gedi’s abundant waters though. These ibex are a common sight as well:

Although seen far less often, Ein Gedi is also home to species such as leopards, striped hyenas, red and Afghan foxes, wolves and many more. During the migration seasons, more than 400 species of birds will pass through.

One will notice that the greenery that Ein Gedi’s waters permit in this harsh desert climate, does not extend very far at all beyond the immediate range of that water. This is evidenced in the picture below, where the area touched by the water itself is fairly lush, but the landscape beyond very quickly takes on the appearance of the rest of the Dead Sea area:

Moving up the canyon, one squeezes through many rocks…

…to be rewarded with scenes such as this:

Ein Gedi’s vegetation is a unique blend of tropical, desert and Mediterranean plants… And as one moves farther up the canyon, this vegetation grows increasingly thick as the amount of water increases and one is compelled to make their way through “tunnels” of flora to reach the pools and waterfalls that extend up the canyon: 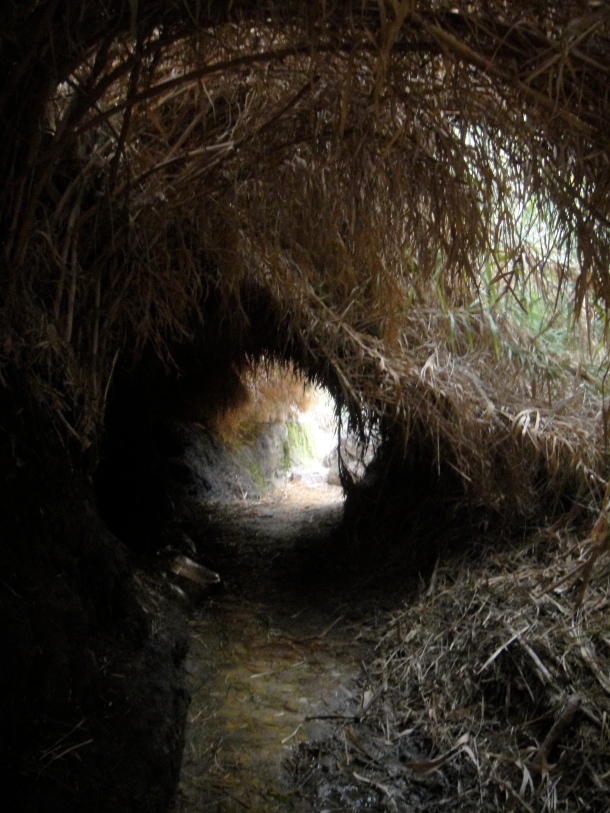 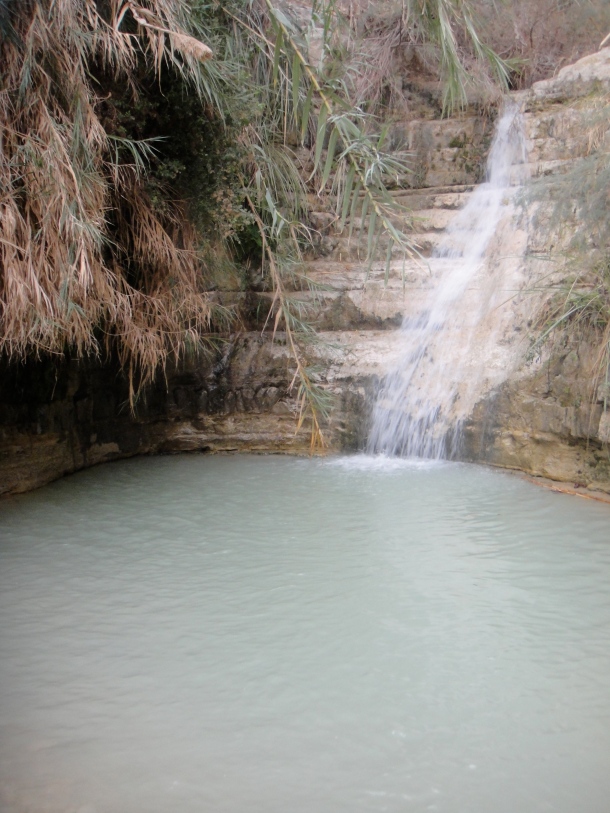 The sides of the canyon starting to squeeze in as we near the end: 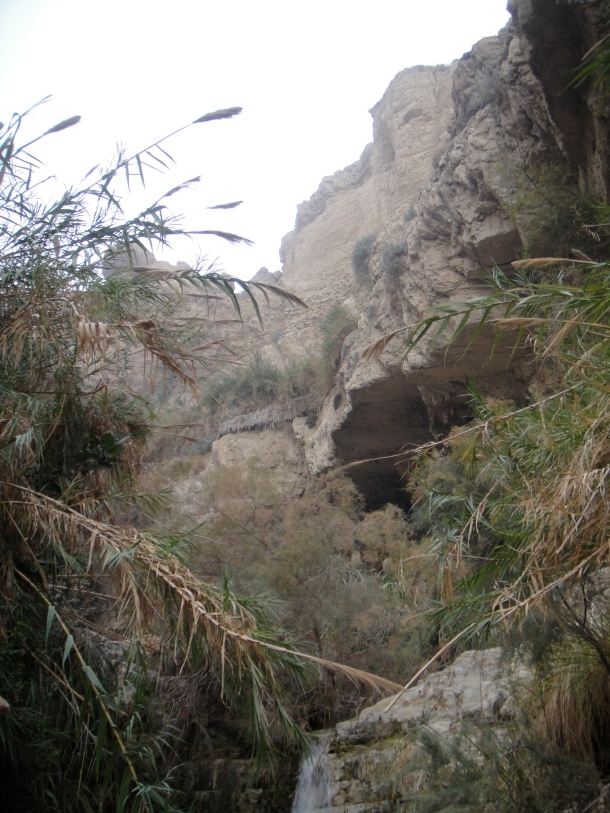 At the head of Wadi David is David’s Fall. This is as far as one can go up the canyon without technical equipment (which would take one up to the plateau beyond).

David’s Fall pouring into the pool below it:

The pool is also fed by water seeping out of the sides of the cliffs (which supports the lush moss seen below) which surrounds David’s Fall:

Turning back, this crow set the tone of our journey back down the canyon (I am a big fan of crows): 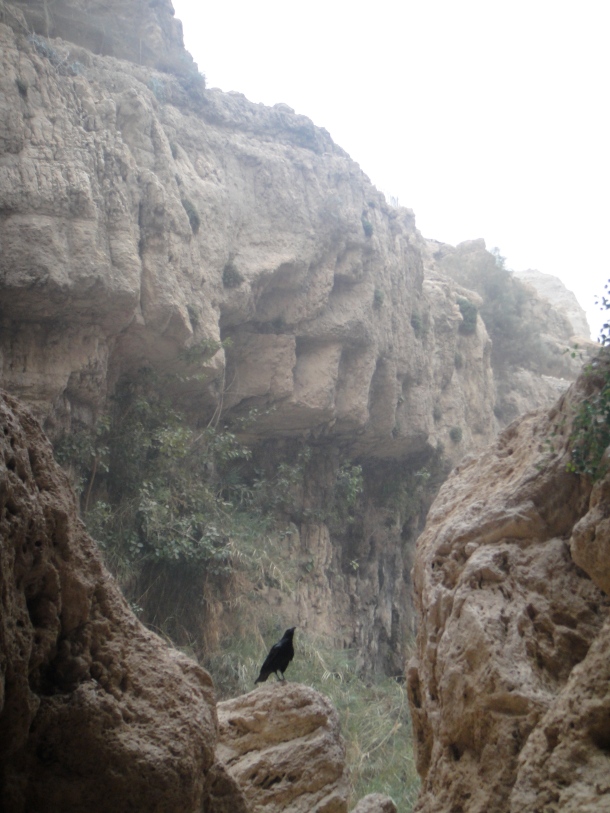 Human activity at Ein Gedi dates back more than 6,000 years and the site has been known by its present name since at least biblical times. And there are, in fact, many biblical references to the oasis. Ironically, given its life-sustaining waters, these references are often related to massacres, times of war or as a place of refuge. The most notable mention of Ein Gedi pertains to David, where it is said that David hid from King Saul in a cave, saving himself from a certain and unpleasant death.

And as an interesting “oh by the way”, the site was even owned for a short time by Cleopatra after it was gifted to her by an admiring Marc Anthony…

One thought on “The Ein Gedi Oasis”