There’s a watershed that runs through Oregon House (where I grew up) known as the Dry Creek complex. It flows through Thousand Trails, Collins Lake, blah, blah, blah…

When I was in college, a family friend mentioned an “easy” route one could take by floating on an inner tube late in the season (when water levels are lower) from New York House Road in Brownsville down to Oregon House. Of course, I decided to go for it.

Although it was relatively early in the year and I was not in possession of an inner tube, I considered these to be trifling matters and decided I would simply walk down Dry Creek instead of floating down. I packed some food and water into a backpack and wore shorts, a simple t-shirt and canvas shoes without socks. I did not bother wearing any socks as I thought there was no point since they were going to become soaking wet anyway.

I was dropped off at the bridge along New York House road and my plan was to walk down Dry Creek until it ran under Frenchtown Road again near the historic town of Frenchtown and what is known locally as the “Taco Bell House”.

I plunged into the water and started downstream. The water felt great, the scenery was gorgeous and I felt confident. However, almost immediately I started having trouble. The back of the canvas shoes started chafing at my ankles and without socks, there was nothing to protect me from this. Within 100 yards, my ankles were starting to bleed. Unfortunately, I was committed at this point and had no choice but to forge on.

Before long, with blood streaming into the water and my ankles on fire, I decided to stow the shoes in my backpack and walk in bare feet. However, this was not exactly an improvement. You see, this creek does not have a sandy bottom. Extensive mining in the past has left Dry Creek with a bottom consisting of jumbles of rocks. So, it wasn’t long before my bare feet were sliced and battered and bleeding as copiously as my ankles had been.

So, I was forced to alternate between wearing the canvas shoes or going in bare feet depending on which part of my body I felt like abusing. Progress was painfully slow and the swift currents were not helping as I was unable to make out the bottom of the creek and, therefore, unable to see where best to step. As a consequence, I fell frequently and in the rushing waters it took quite an effort to regain my balance and equilibrium.

I came to a narrow canyon and as the water was rocketing through I was forced to climb along the edge of the canyon. The rocks were slick from the spray of the water and I slipped and fell into the torrent below. Immediately, I was dashed against some large boulders, knocking the wind out of me before pulling me back into the water. I hauled myself out, but at the end of the canyon I went down again as I was trying to traverse a waterfall.

I was swept over the waterfall and then found myself trapped in the undercurrent generated by the waterfall hammering into the pool below. I was drowning. Choking on water, I managed to scratch my way along the bottom until I was away from the forces pushing me down. Fighting to the surface, I was able to get in a gasp of air before the rapids picked me up again and threw me downstream. I found myself underwater again and this time I was pulled along a riverbank lined with blackberry bushes. My shirt was ripped apart and my back was scoured by the thorns.

I crawled out again, but the way forward was covered with nearly impenetrable blackberry thickets. It took me hours to complete the final mile of Dry Creek, being torn apart by the blackberry thorns before I finally staggered out of Dry Creek and onto the flat asphalt of Frenchtown Road. At some point I realized that I had consumed no food or water since I’d started. Recognizing that my body was going into shock, I forced myself to drink some water which I immediately vomited back up.

Numb, exhausted and in shock, I stumbled home – literally crawling up the front steps to avoid any additional pressure on my feet or ankles and collapsed into an almost catatonic state on the floor of the house.

Later I realized the phone was ringing and summoned the energy to answer it. It was my girlfriend at the time. No “hello” or “how are you” greeted me. It was all business. She was calling to tell me that she had cheated on me earlier and was feeling guilty about it.  American girls…

I was left with a Pyrrhic victory that day. I had completed the route, but the river gods and the vagaries of life had kicked my ass. Worse, due to my circumstances, I had had to pass by several areas that seemed more than worthy of exploration. Ever since, I had wanted to return and put in a better showing on Dry Creek and to explore the unexplored areas.

Ten years later and Brandon, Amanda and I were up in Oregon House for a visit. I mentioned my feelings about the Dry Creek route and soon Amanda was dropping Brandon and me off at the New York House bridge to start down Dry Creek.

This frog was in the shoes I was going to wear. Having an amphibian in my shoe – an auspicious start?

Brandon making final gear adjustments before we set out 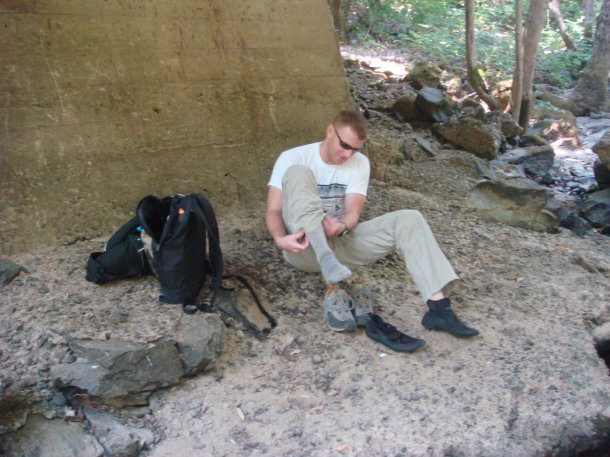 The view at the start of the route. The water is much lower this time. 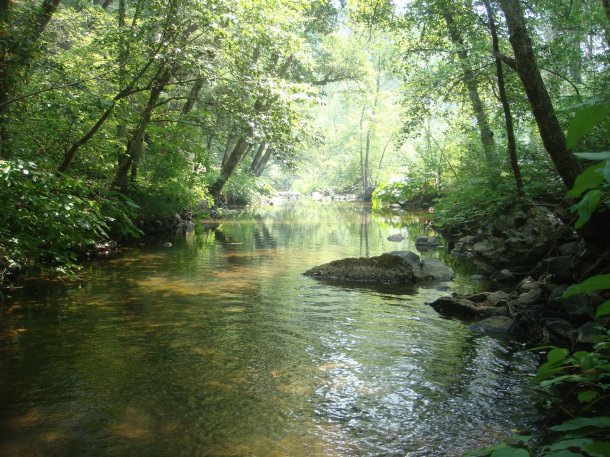 As mentioned previously, the area is filled with mining history. This pile of rocks was hauled out of the stream by miners.

Despite lower water levels, falling was still a frequent occurrence on the slippery rocks 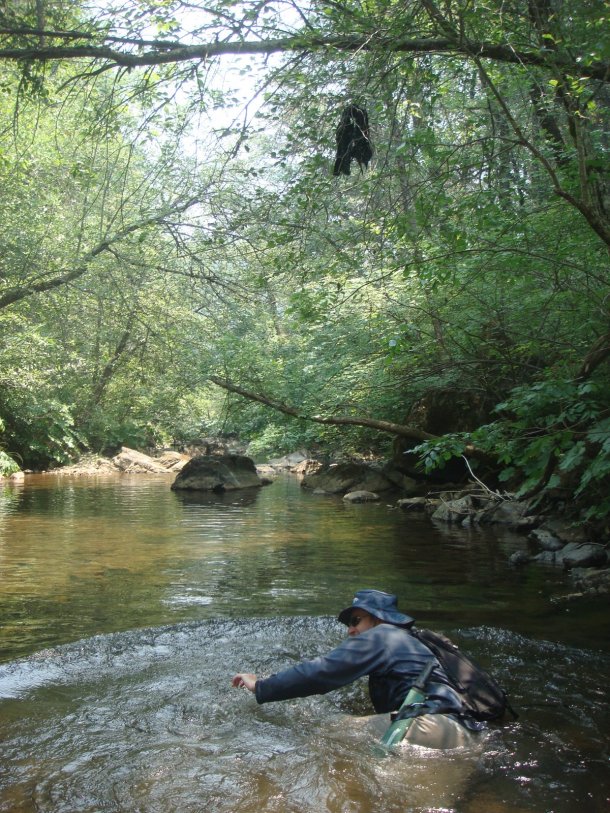 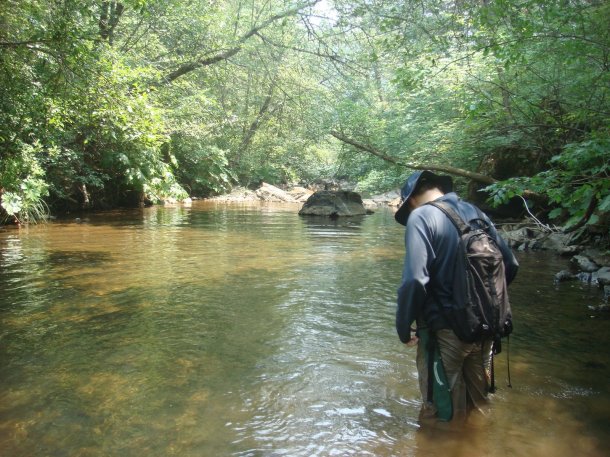 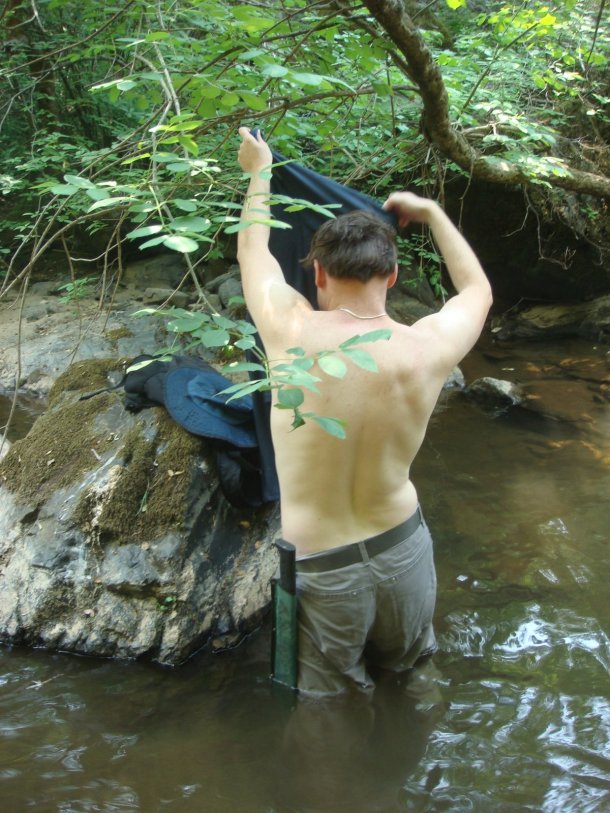 One sign of a healthy water system – ample crayfish

At times, we were forced out of the water due to some natural obstacle and I would bring the machete into play to move forward with relative ease 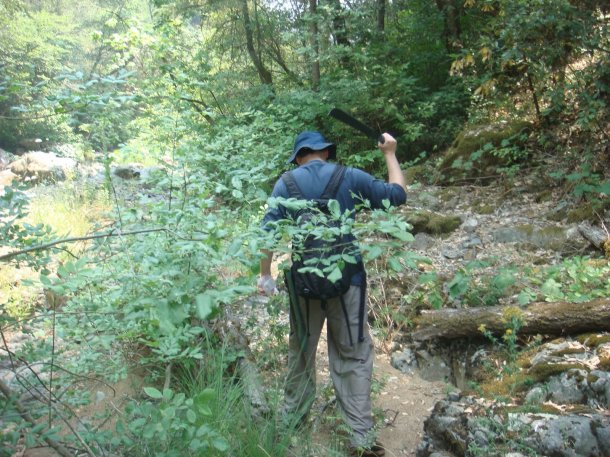 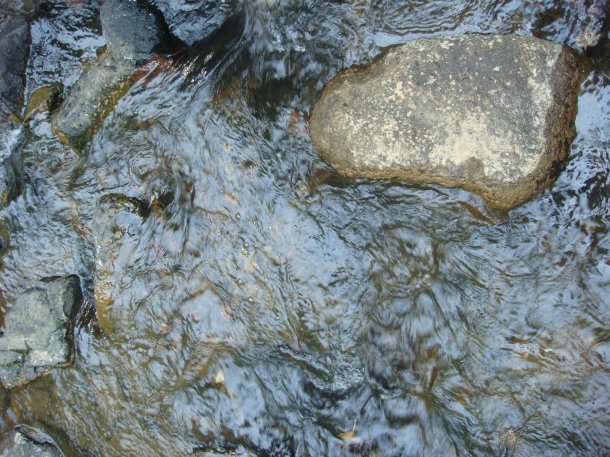