This was my first real view of Minsk – a big burst of Soviet-style architecture in the form of a new library. For the record, I love these sort of grandiose and ambitious projects.

This was the view from my hotel room.  We were told the building closest to us housed some sort of secret military installation.  And there were always guards out front, so perhaps this has some merit.

I’ll steal anyone’s good idea and this girl was posing for a picture for her friend, so I decided to use her as well.

This car represents the old Belarus of the Soviet days – 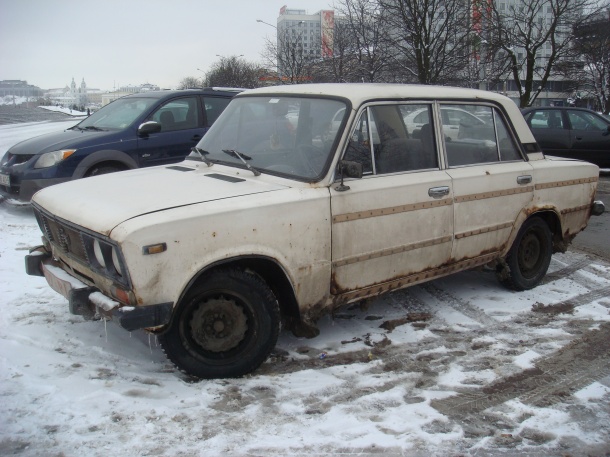 And these vehicles seem to represent the Belarus of today. 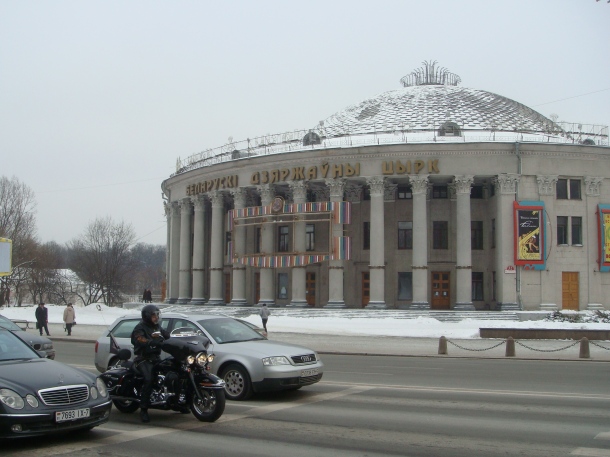 This is where Lee Harvey Oswald lived during  his time in Minsk (on the fourth floor) while he flirted with the Soviet Union.  He didn’t spend all his time here though because he worked at a radio station down the street and found the time to obtain a Russian wife in between thinking of ways to keep himself busy back in the United States.  Reportedly, the KGB never trusted him and kept a close eye on Oswald.

This is right next to Lee Harvey Oswald’s old flat.

And this is the great view of Gorky Park that Oswald would have enjoyed.  The guy in the foreground is ice fishing. 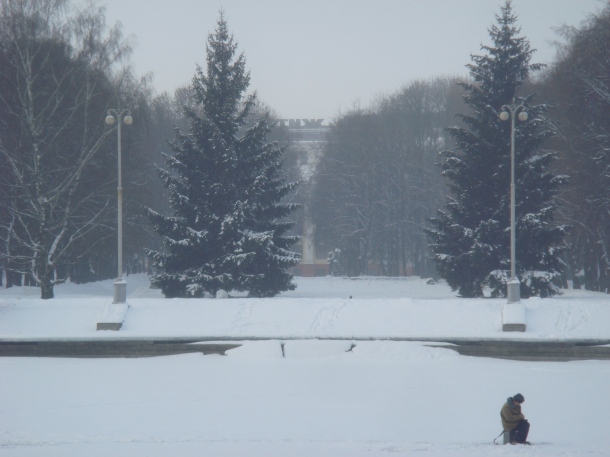 More views of Gorky Park and its edges… 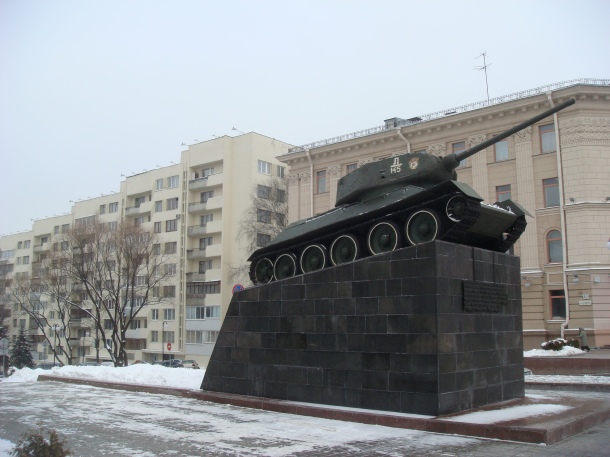 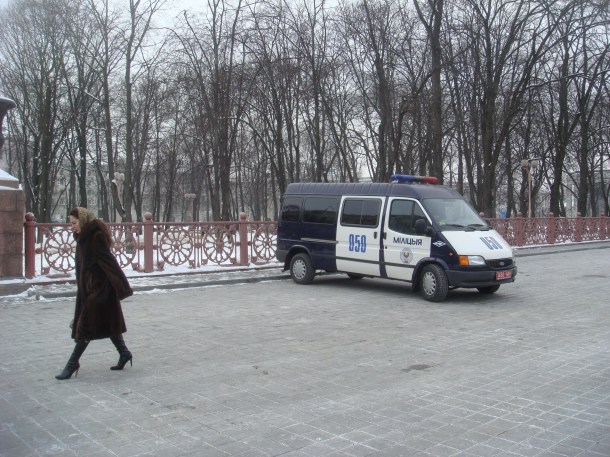 This is the KGB Headquarters in Minsk. 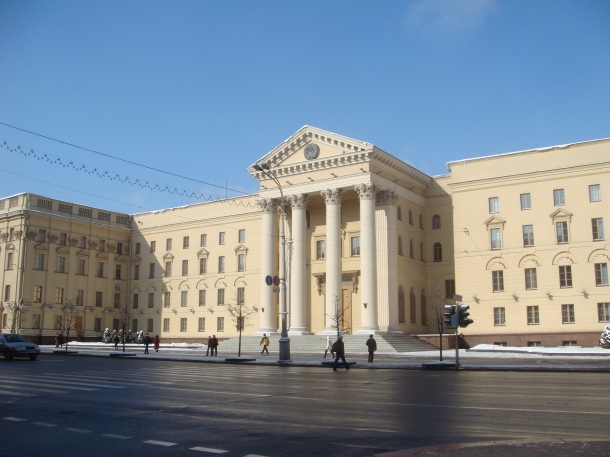 With me filming them on our camera from The Discovery Channel, Nigel and Andy went up and knocked on the big door you can see in the picture below.  A 7-foot-tall, Nazi Storm Trooper lookalike, burst out of the door and snarled, “Nyet!”  Photo session over.  Unfortunately, I wasn’t expecting the sudden appearance of this KGB officer and so I’m afraid I did not capture this exchange on camera.

Fortunately, there are lots of other soldiers and military personnel strewn across Belarus for us to take pictures of.  Such as this goose-stepping guard watching over one of the many war monuments in the country. 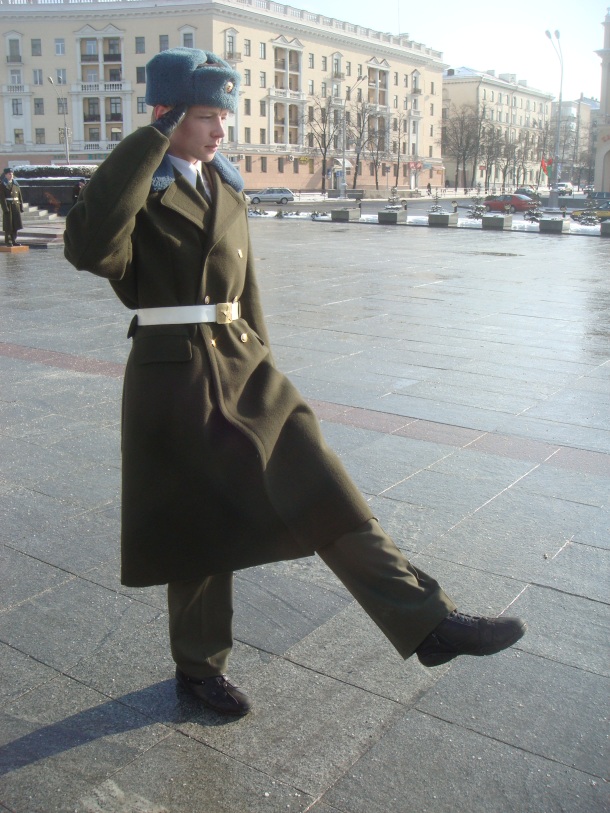 In Belarus’s best politically correct behavior, the guards at all of the monuments are equal numbers of men and women. 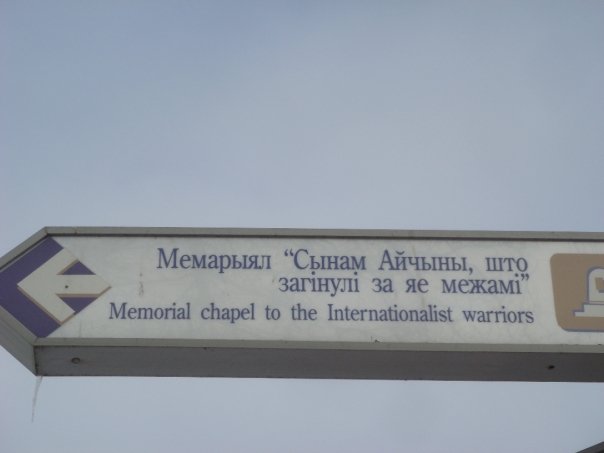 You’ll make it to the Isle of Tears.  This memorial was constructed for the many Belorussian soldiers who died fighting in the campaign in Afghanistan in the 1980s.

On days when it is not freezing, water is piped to the eyes of the statue below and so it literally does shed tears for the fallen soldiers.

Now, since 2004, I have maintained that Brazil was home to the most attractive people (on average) that I have seen anywhere.  However, I’m afraid that Brazil has been knocked off of its perch by Belarus.

Seriously, the women (on average) really take care of themselves in Belarus – dressing well, not letting themselves get fat, acting with class – and this is on top of a natural genetic inclination toward attractiveness.  Quite unlike the slothful, fat slags in the West that waddle around in their track suits when they’re not parked in front of the television or vomiting all over the streets of London during their weekly binge-drinking sessions on Friday and Saturday night, squealing and looking for someone to throw a fuck into them.  Ummm, not that I’m thinking of anywhere in particular…

What’s funny about Belarus though is that it is just the women that are attractive.  The men are awful-looking.  So, I can’t tell you how many times we saw a stunning beauty with some fat, bloated pig of a man, chain-smoking and dressed horribly.  I felt like I was observing a great crime or a great tragedy (or both) at such times – even though it was true (on average) every time we saw a couple. 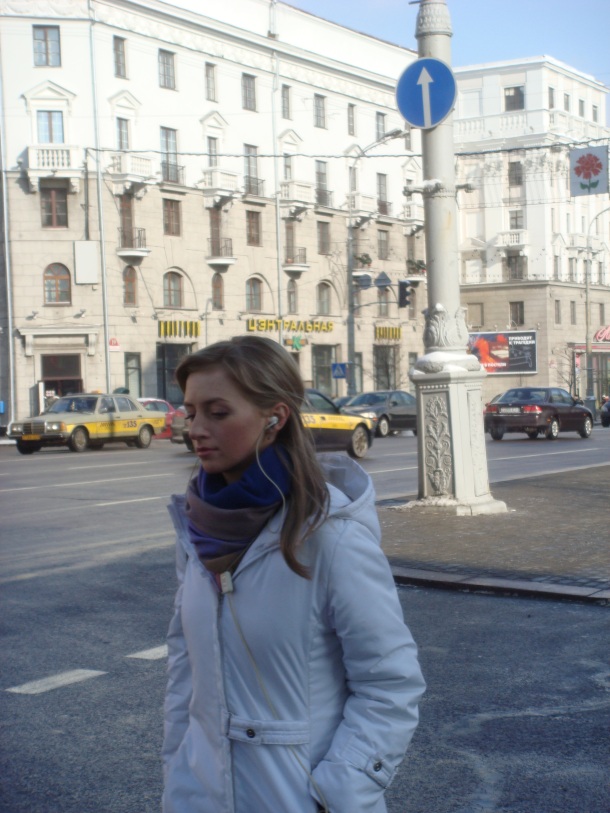 I said “on average”…  She was really nice though and it made her day that we took her picture.

The train station in Minsk. 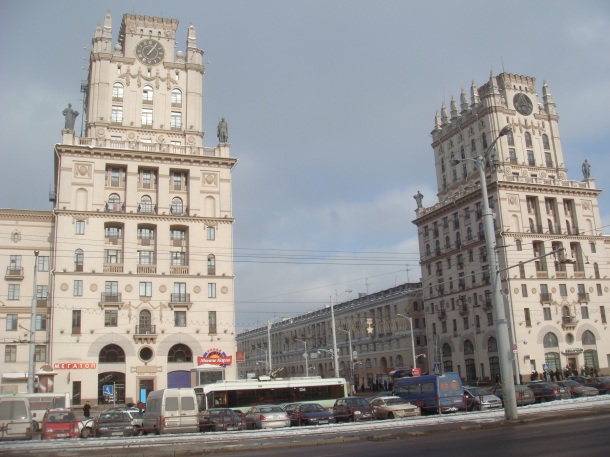 I loved this picture – the triumph of capitalism.

Well, the people may be different and the architecture may be different, but some things are the same everywhere – this hotel clerk that looked so busy behind the counter was actually engrossed in a game of solitaire.  She just laughed when we pointed out the similarities between our countries.

4 thoughts on “About Minsk… Scenes of Belarus”