On our first full day in Belarus, we hired a driver to take us out to the remote Khatyn Memorial. This “village” is deep in the forest, down the road pictured below. 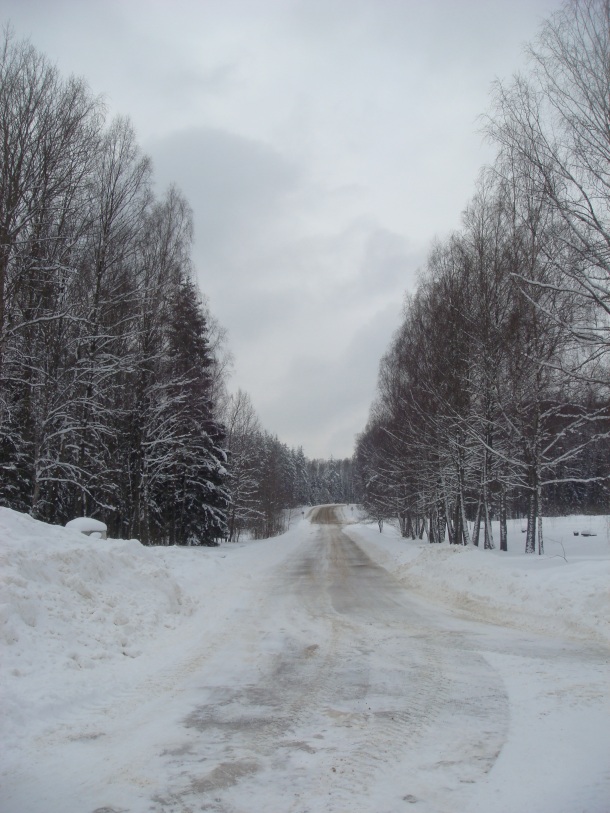 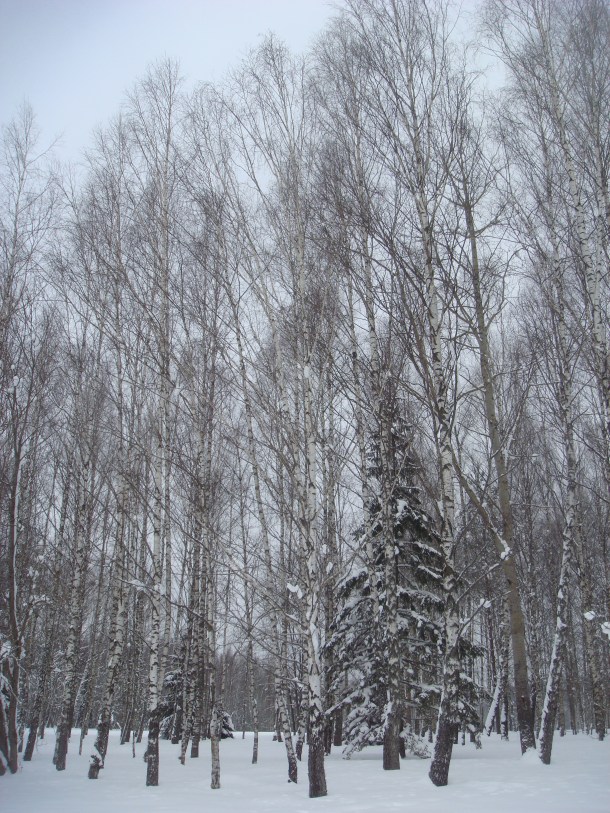 However, you will not find this small Belorussian village on even the most detailed geographic map today. It was obliterated by fascists on March 22, 1943. The inhabitants of the village did not know anything about the fact that, earlier in that morning, a fascist motor convoy was attacked by gunfire on a motorway just 6 km away from Khatyn, resulting in the death of a German officer. Hopped up and looking for revenge, the fascists focused their frustration on the nearest population center – Khatyn…

The inhabitants of Khatyn were innocent, however their death sentence had already been pronounced. All of them – young and old, women and children — were driven from their houses into a nearby barn. The elderly and sick were roused from their beds with rifle butts. When all people were finally in the barn, the door was locked and the Nazis covered the structure with straw, splashed benzine over it and set it ablaze. Immediately engulfed in flames, the children inside were crying and suffocating in the smoke. With the adults starting to panic, the doors of the barn could not bear the force and the pressure of the dozens of people and so they crashed open. Horror-stricken people in their burning clothes spilled out, but the fascists with their machine guns dispassionately gunned down those who tried to escape from the flames. 149 people, including 75 children were burned alive. The youngest was only 7 weeks old. The rest of the village was then looted and burned to the ground.

In the village of Khatyn only four children survived. Girls from two different families — Maria Fedorovich and Yulia Klimovich managed to leave the barn and crawl to the nearby woods. Half dead, and completely burned they were found by the inhabitants of the village of Khvorosteny. However, this village was also later burned to the ground and the two girls were killed along with the rest of the villagers.

The two other surviving children were a 7-year-old Viktor Zhelobkovich and a 12-year-old Anton Baranovsky. Both were mistaken for dead after being severely wounded and so escaped the attention of the Nazis.

The only adult witness to the Khatyn massacre, a 56-year-old village blacksmith named Joseph Kaminsky, also wounded and burnt, recovered consciousness late at night when the fascists were gone. He found his injured son among the corpses of the fellow villagers. The boy was fatally wounded in the abdomen and covered in burns. He died in the arms of his father.

And so the only sculpture of the Khatyn memorial complex “The Unconquered Man” was based on this tragic story in the life of Joseph Kaminsky. 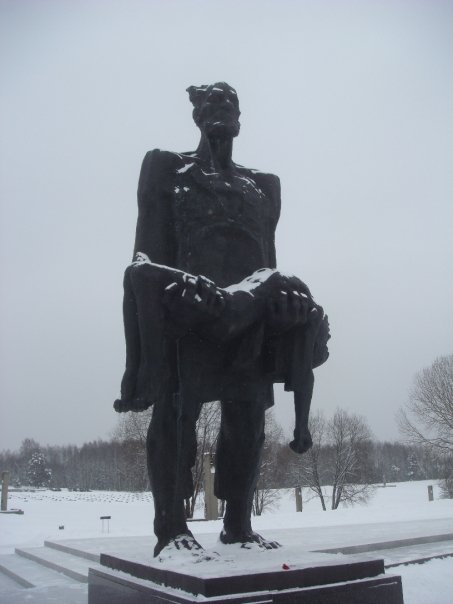 The structure below indicates the site where the barn was burned with the villagers inside. 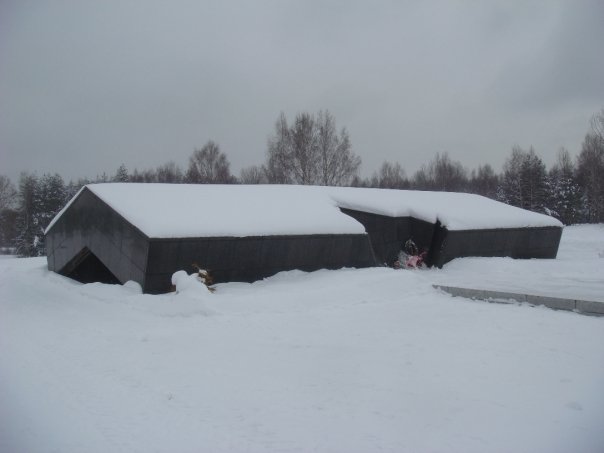 In the summer, these plants bloom red – meant to symbolize a trail of blood leading to the Khatyn site. 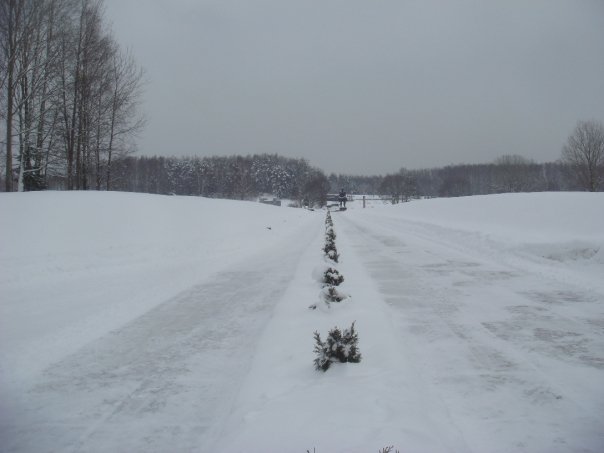 These foundations and chimneys were constructed on the site of each of the homes that was burnt down. 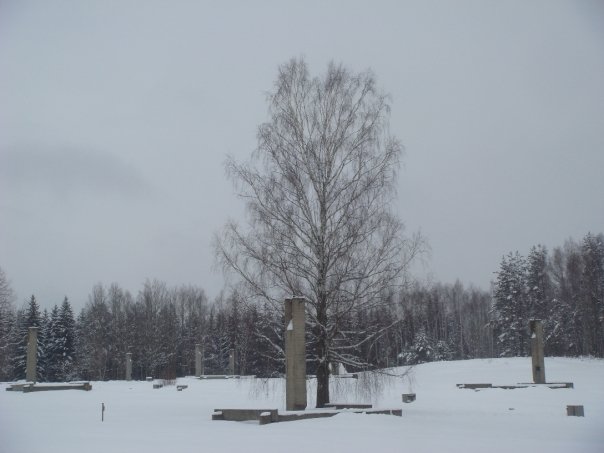 The homes are built with an “open door”, meant to symbolize the open and friendly nature of the people of Belarus. 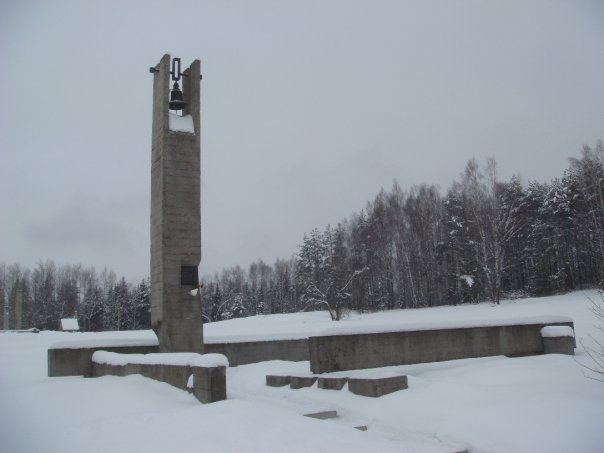 This plaque memorializes the inhabitants of this particular home site. 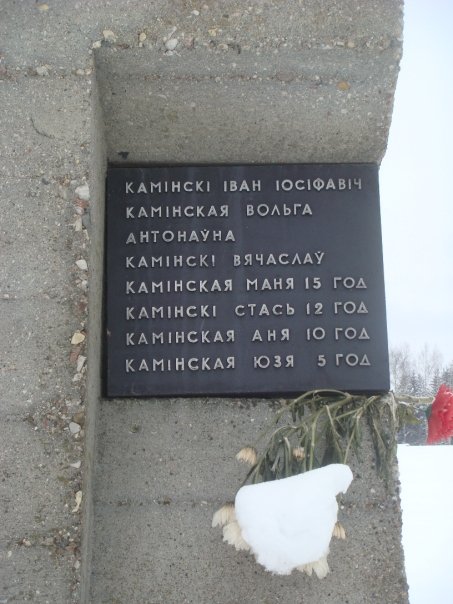 Khatyn was far from the only village destroyed by the fascist forces, however.  A total of 209 cities and 9,200 villages were destroyed.  618 of these villages had the residents burned alive as punishment for the actions of partisan groups.  The number 186 (pictured below) acknowledges the 185 other villages (aside from Khatyn) that were destroyed and never rebuilt. 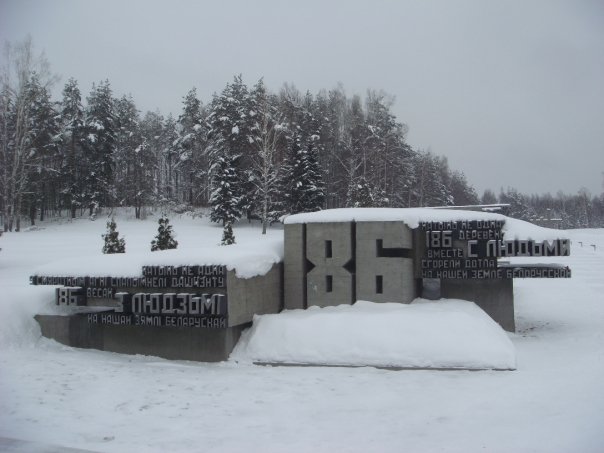 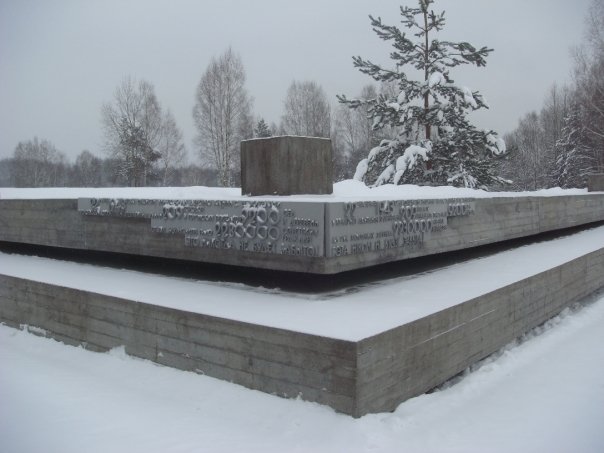 The graveyard pictured below is not for individuals, but for entire villages. In other words, each marker does not represent one person, but an entire village. Each marker contains a glass urn with ashes and soil from the destroyed village named on the marker. 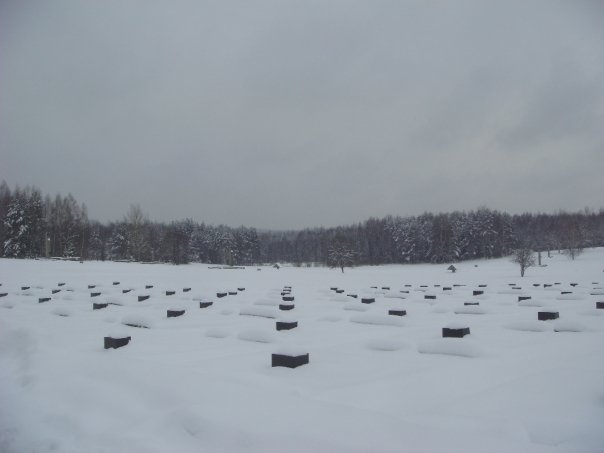 The Eternal Flame pictured below is surrounded by three birch trees meant to remind us that every fourth Belorussian citizen perished during the “Great Patriotic War”. Yes, 25% of the population was killed. In fact, the population of Belarus did not recover to its pre-war total until 1971.

There are 4 niches on the pedestal, but the birch tress grow only in three of them. The Eternal Flame is there in memory of each fourth person killed. 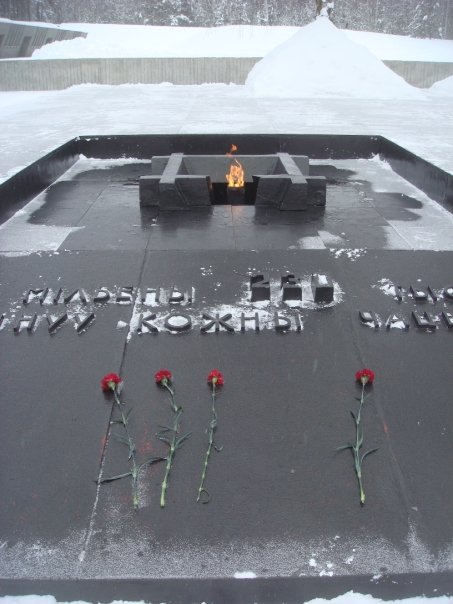 More than 260 death camps were built by fascists during World War II. So, there is also “The Memory Wall” with memorial plaques in its alcoves here. On these plaques you can find the names of the concentration camps and the places of mass extermination of people on the territory of Belarus. 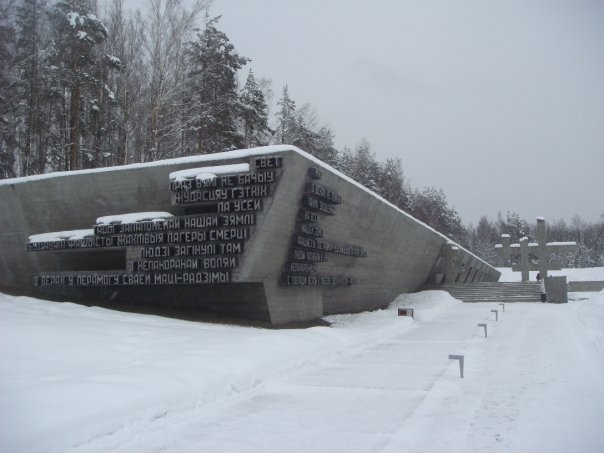 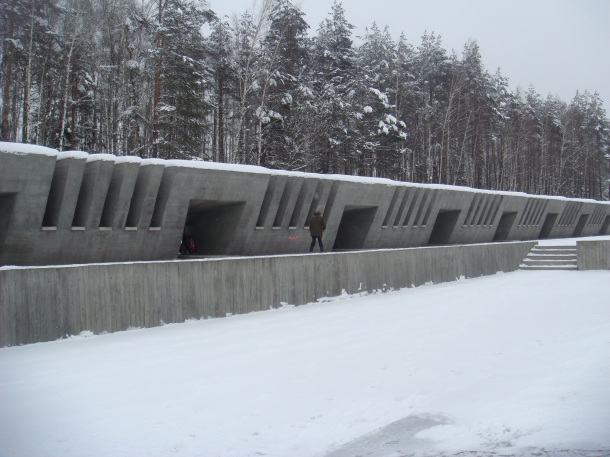 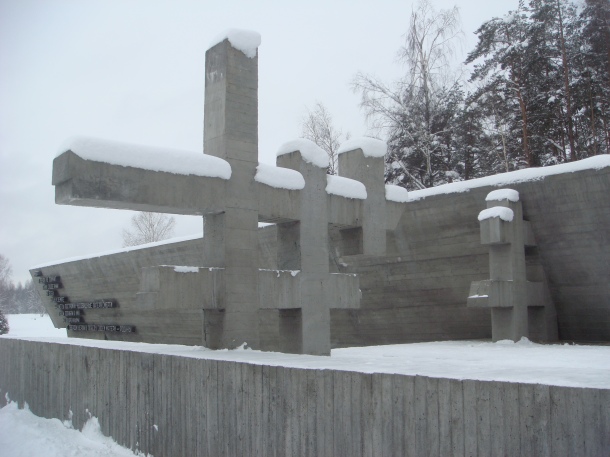 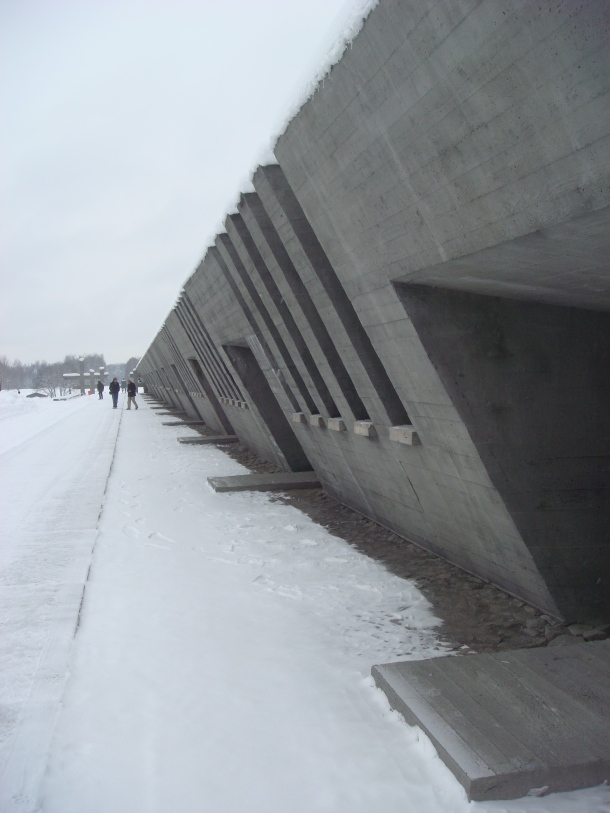 These hollow sections are memorials for the children that were murdered. You can see that people have left stuffed animals and other toys behind as a token of sympathy. Somehow, the fact that they are frozen makes it more poignant. 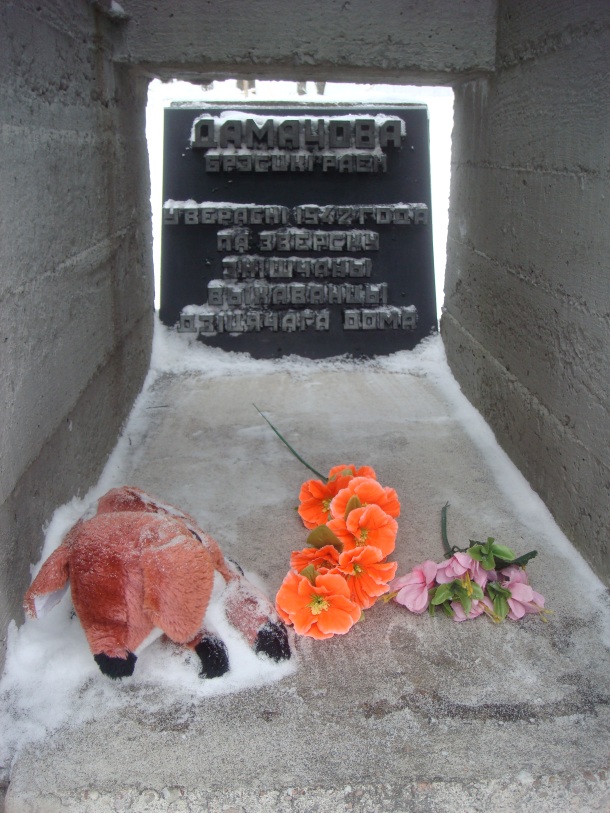 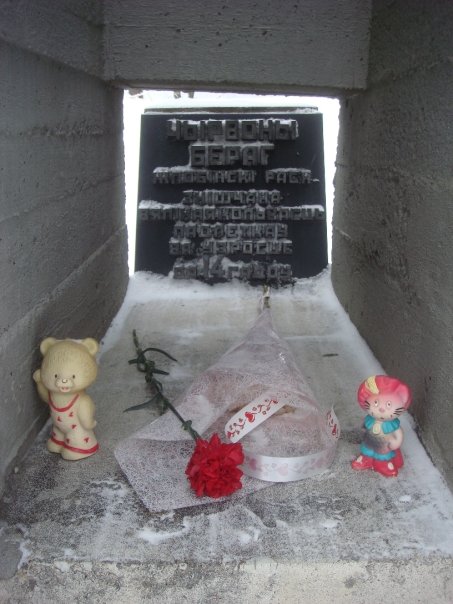 We were equipped with a camera from The Discovery Channel and I hope they appreciate the filming we did here because it was not easy. You see, you can’t film with your gloves on because then you can’t feel the sensitive controls on the camera. However, in this kind of cold, once one removes one’s gloves, your hands immediately start burning and hurting. After about 20-30 seconds, depending on the wind gusts, your hands simply go numb and you can’t feel the camera controls anymore. So, then you either have to fumble on or warm your hands up again and start the whole process over again. Not easy conditions for filming. 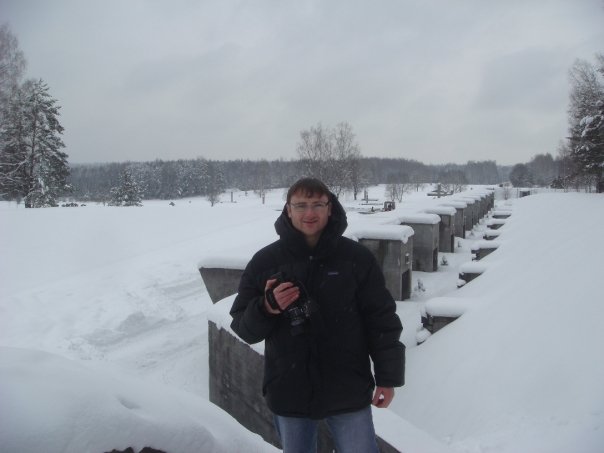 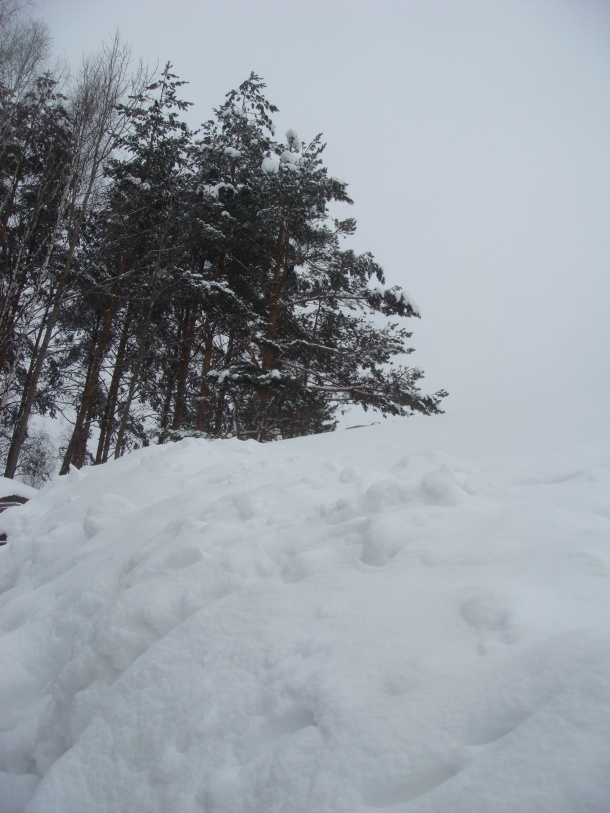