This question presented no small amount of angst to the Italian and me while we were in South America. And there is absolutely no reliable information on this topic anywhere that I found.

So, how does one get from Macapa into French Guiana?

Even getting to Macapa is a tricky affair, but it can be done. We had to take four separate flights to get to Macapa and it took us a day, but it is doable. Once in Macapa, take a taxi to the bus station.

If you’re on a budget, you can sit around and wait a while for one of the decrepit buses to depart. When we were there, two buses a day headed north to Oiapoque and they left at 5:00 and 6:00 p.m. respectively. The buses are slow and so it is essentially an overnight drive to reach Oiapoque from Macapa.

Or you can hire one of the guys with a 4WD (usually a Toyota Hilux) that will be walking around offering their services as well. The advantage of hiring the guy with the Hilux is that you leave when you want (which was important to us because we arrived at the bus terminal a little after 5:00 in the morning and didn’t want to wait 12 hours for the bus to leave). Also, the Hilux is a lot faster than the bus – you can be in Oiapoque eight hours after departing the bus terminal in Macapa when taking the Hilux option. The Hilux can fit three people in the back and one passenger comfortably.

Unless you pay an astronomical sum, the driver will want to wait to leave until the vehicle is full, which in our case took about 45 minutes. We paid 150 reals each and if the driver or one of his representatives tries to hit you up for more, be sure to bargain with them a little. You can always tell them that you’ll just wait for the next driver and go with him. A guy that jumped into the truck with us at the last minute paid 120 reals, but he had the shitty spot in the middle of the back seat. So, I expect this may have impacted his bargaining position.

This is the Toyota Hilux we rode in. It was clean when we started, but the paved section of BR156 very quickly turns into a muddy, dirt road: 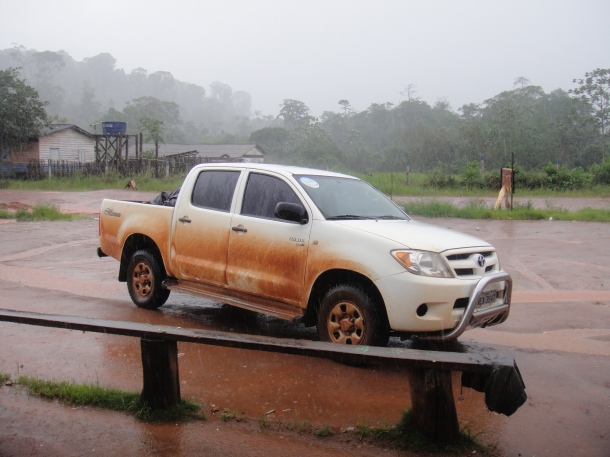 Our driver stopped a couple of times in small settlements for food or gasoline, but not for long: 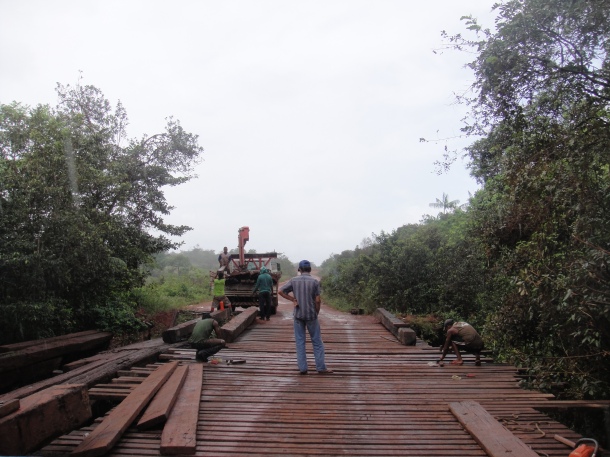 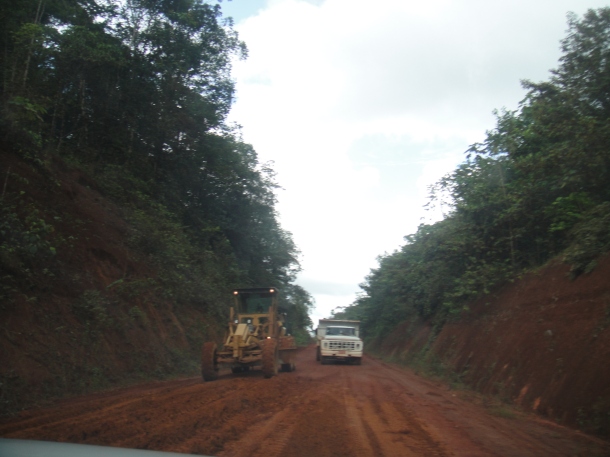 Once you arrive in Oiapoque, the driver will swing by the border control office in Brazil so you can have your papers stamped. You’ll then be driven down to the Oyapock River, which is the natural border between Brazil and French Guiana, where you hire one of these boats to take you over to French Guiana. I can’t remember exactly what we paid, but it was between 5-7 euros. The boat will simply run you from Oiapoque to Saint-Georges.

As an interesting “oh by the way” Oiapoque is a major center for the sale of gold illegally mined in French Guiana: 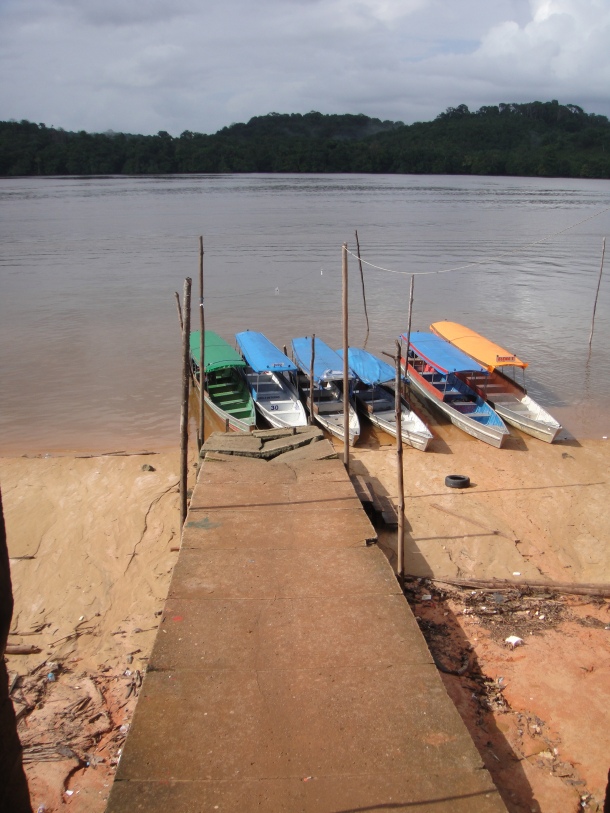 This is a view of a bridge under construction that will supposedly cross the Oyapock River someday and link road traffic between Oiapoque, Brazil and Saint-Georges, French Guiana. However, completion of this bridge has been rumored for some time and has not happened yet:

Here’s a video of a portion of our river crossing:

Upon arriving in Saint-Georges, French Guiana we paid 50 euros each for a ride into Cayenne and our driver was a very nice Brazilian woman named Blanche. 50 euros is the going rate and this is not negotiable, unlike in Brazil. If you need to (if you do not have an EU passport, for example) your driver will take you by the passport office to get your needed stamp. Once on the road, the drive took us about three hours to reach Cayenne (The roads in French Guiana are paved) and that includes time spent at two police checkpoints.

For a more detailed and more recent account of this journey, check out this post from Jonny Blair. There is not a lot of information out there on making this journey and he has done a good job of breaking down the process.

22 thoughts on “Macapa to Oiapoque on BR156… Or Macapa to Cayenne… Or how the hell do I get to French Guiana from Brazil?”