I introduced you to Pei Tapan Gab earlier. And during that introduction to Pei, I mentioned that his family is in the tea business. So, below, I will profile their tea plantation (they call it a “tea garden”) and discuss the tea business in general.

Pei’s family got into the tea business because Pei’s father used to own a sawmill. You see, the way it works in Arunachal Pradesh is that the person that clears the land, owns the land.

On a completely unrelated, but nevertheless interesting, aside – Pei’s parents were married at the age of seven. This is a common occurrence in the Nyishi culture.

The Indian states of Assam and Arunachal Pradesh are good for tea because tea does best in hot, humid climates. Thus, areas in and around the foothills of the Himalayas are quite good because they pick up so much moisture from the clouds hitting the mountains beyond.

Pei’s family first started growing tea in 1992 and they now have 30 hectares on which tea is being grown. To help put that into perspective, Pei advised me that the minimum size at which a tea garden could profitably operate is 1 hectare.

This is the family home on the tea plantation where we spent a night… It has a generator for electricity which is nice, but that comes with a price since at night it is the only source of light for miles around, attracting swarms of insects: 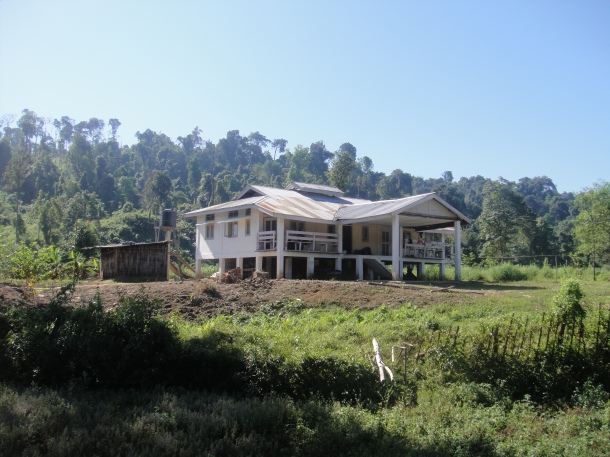 Just around the house they are planting new fields of tea. Tea plants can live well past 100 years. However, after 90-100 years, the plants become less productive and so the plantations will pull them out and replace them at that time. The new plants are mature enough to start being picked after 2-3 years:

The family starts off tea plants in this shaded structure near the home where they are kept until they are old enough to be transplanted into the fields:

Although tea is far and away their main product, Pei’s family also grow a small amount of citronella: 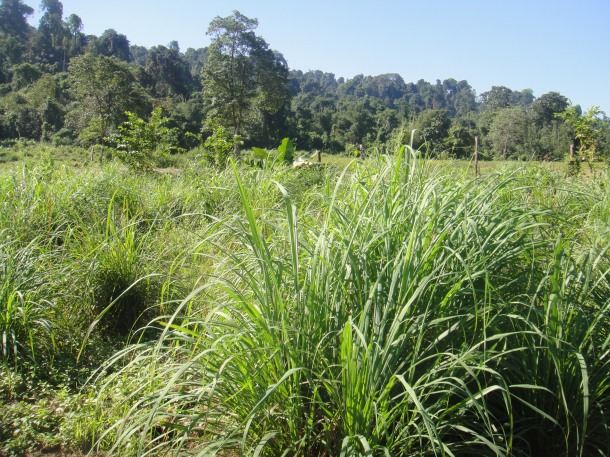 And process it in this nearby machine… Citronella oil is used in a variety of products ranging from soaps to insect repellents to candles: 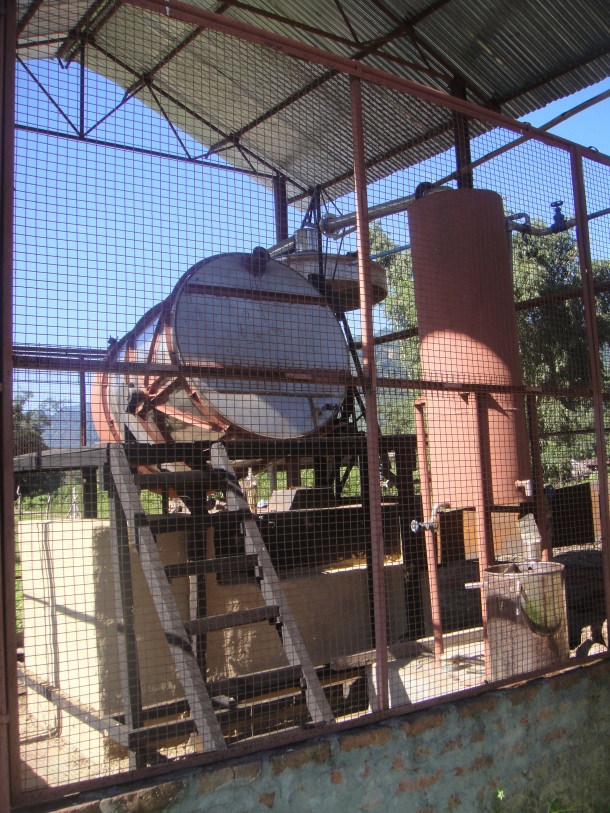 After breakfast and our look around the house, we drove out to the primary area where the tea is grown:

The plants in the foreground are waiting to be planted: 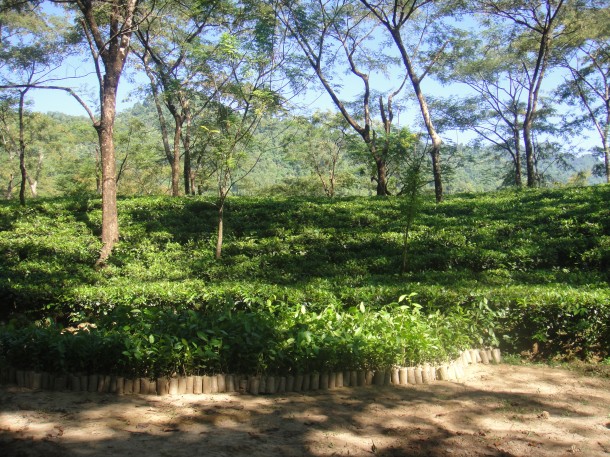 The trees interspersed with the tea provide a number of important functions. They protect the tea from certain types of insects as well as protect the leaves from burning in the intense Indian sunshine. In addition, the shade from the trees helps to keep the area more cool which reduces water consumption.

The tea plantations are not irrigated as the water from the monsoon rains is sufficient for the plants. However, it is possible to get too much of a good thing and adequate drainage is important to prevent the tea plants from being washed away during heavy rains: 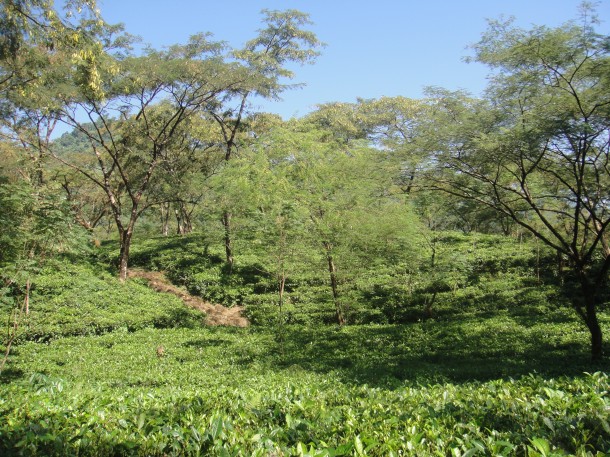 It is actually just a small part of the tea plant that ends up in your cup and that is the new growth on the tea plants… Just the light green tops such as those you see below are used and these leaves are plucked once a week from March through November. During the winter months, the dormant bushes are pruned back so that vigorous growth during the warm months is ensured: 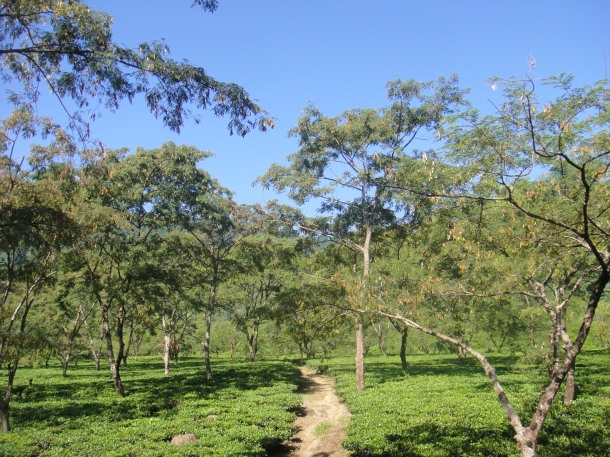 The tea plantation owned by Pei’s family produces approximately 20,000 kilos of (wet) tea leaves a month which works out to about 5,000 kilos once the leaves have been dried. At the time we visited, they were receiving 18.25 rupees per kilo of tea.

Presently, the family sells their harvested tea to their neighbor, the much larger Ananda Tea Plantation as Ananda has processing facilities for the tea where it is dried, processed and packed into bags. The tea operation run by Pei’s family is just about large enough that they are increasingly interested in constructing their own processing facilities. Pei estimated that it would cost 50 lakhs (one lakh = 100,000 rupees) to build a small processing facility that met their needs: 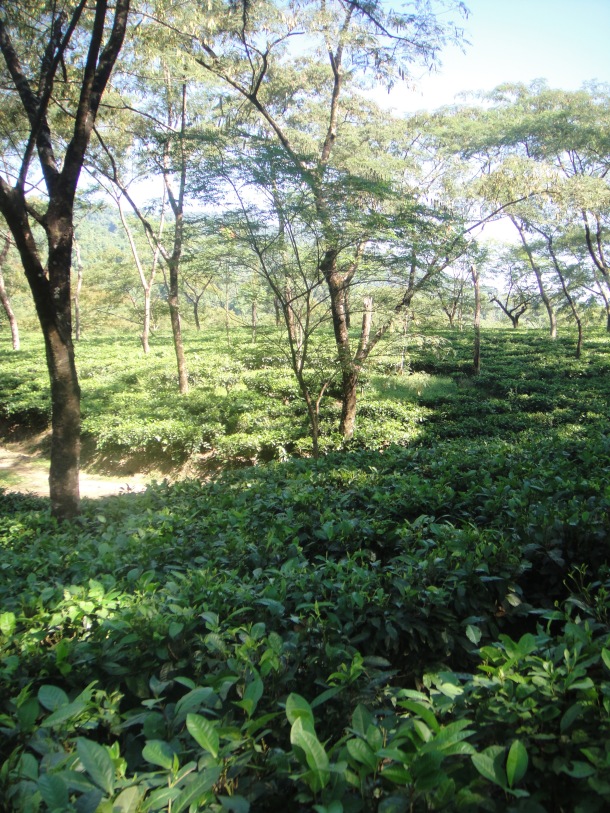 Some of the workers on the tea plantation:

The family employs 50 full-time workers and up to 30 temporary workers during the picking season. The workers are paid 100 rupees a day for their labor and have every Monday off.

Aside from plucking the soft leaves of new growth off of the tea plants, the workers also are needed to clear weeds away from the plants and to occasionally apply pesticides to keep the plants free from such afflictions as red spider disease.

Recently, Pei’s family has been struggling with labor shortages as so many people are presently employed at the nearby Subansiri Lower Hydroelectric Project:

As I alluded to above when I mentioned the Ananda plantation, the tea garden owned by Pei’s family is hardly the only tea estate in this area. This part of India is filled with giant tea estates such as the Barang Tea Estate, the Samiran Tea Industry or the Bokel Tea Plantation:

The capital of India’s tea region is Dibrugarh which literally translates as ‘tea-city’. Perhaps not surprisingly, it is surrounded by tea plantations and a number of these estates have colonial-era tea bungalows on their grounds. We stayed in one when we were visiting this area and they are extremely nice – filled with antiques, surrounded by beautiful gardens, impeccable service from the staff… It gives one a good insight into the luxurious standard of living the British obviously enjoyed while they were in India.

One of the many tea sellers that can be seen in Dibrugarh: 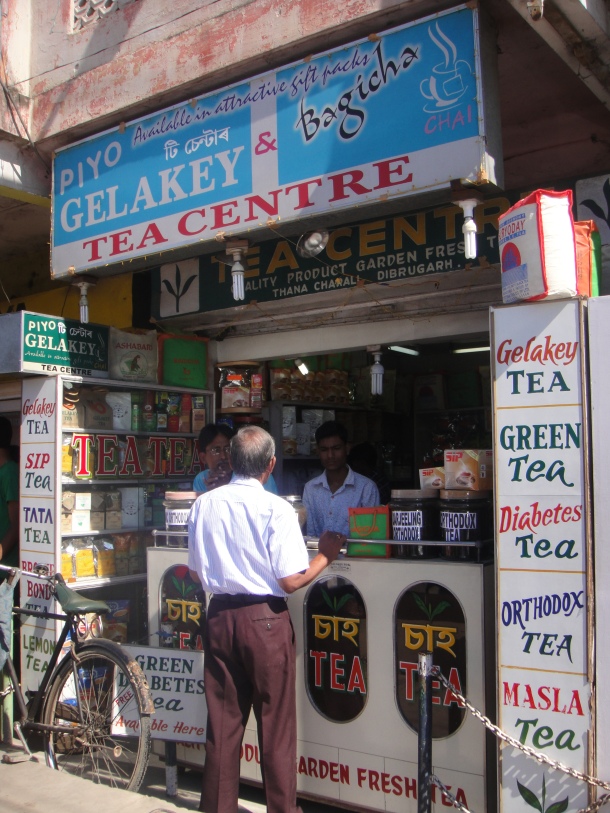 This is the inside of another tea shop:

I thought some of these sacks of tea inside the shops were interesting: 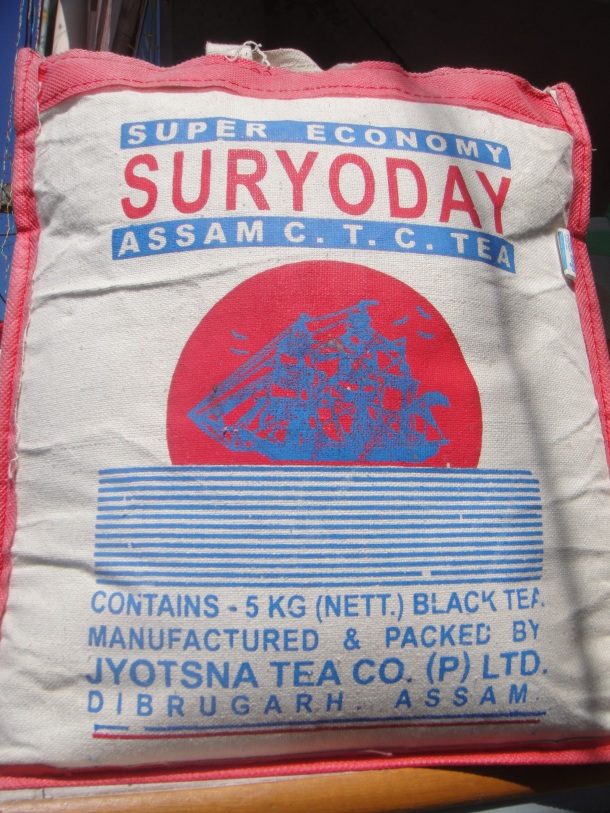 This business sells parts exclusively for the machines and equipment found on the tea estates:

Here is a better look inside:

If one loves tea, a visit to this region must be akin to a religious experience.

5 thoughts on “A Tea Plantation In Arunachal Pradesh”