When I mention Transnistria, the reaction I have gotten from most people is “Trans-what? Where is that?”

However, Transnistria is worth knowing about because it and Moldova are becoming significant.

First off, I have included a map to show you where Transnistria is:

So, what was the war about?

This region is no stranger to conflict as at no time in its history has it been particularly stable. And during World War II, multiple armies crisscrossed Transnistria. The pictures below are examples of just two:

The Nazis (and in this case, their initial allies in Transnistria):

The Romanian Army in Transnistria:

However, the War of Transnistria that most people are asking about took place less than twenty years ago.

As the Soviet Union was collapsing, the Republic of Moldova began moving closer to Romania and the West. This shift was accompanied by a surge of nationalism within Moldova.

However, with its economic ties to Russia and its large Slavic population, these trends alarmed the area east of the Dniester River. As a reaction, an independent Pridnestrovian Moldavian Soviet Socialist Republic was proclaimed on August 16, 1990, with its capital in Tiraspol. And with Russian support the region went into revolt.

What followed is now known as the War of Transnistria… Limited fighting started in November 1990, but with volunteers streaming in from Russia and Ukraine, the fighting intensified throughout 1991 into a vicious Sarajevo-style sniper conflict. Starting on 2 March 1992, the fighting escalated into all-out conventional warfare between Moldovan and Transnistrian forces, culminating in the former Soviet 14th Guards Army (headquartered in Tiraspol since 1956) entering the war in its final stage and attacking Moldovan forces. Moldova was, and still is, no match for Russia and this move by Russian forces effectively decided the outcome of the War of Transnistria.

Scenes of the War:

An uneasy ceasefire agreement was eventually signed on 21 July 1992 and has held to the present day. However, the violence did nothing about the bigger debate, and the issue of independence versus reunification remains unresolved. It is really just the Russian 14th Army stationed in Transnistria that is preventing a resumption of the conflict.

Thus, Transnistria is sometimes compared with other post-Soviet frozen conflict zones such as Nagorno-Karabakh, Abkhazia, and South Ossetia.

Should the Russians ever depart from Transnistria and the conflict resume, it would likely be a messy and drawn-out affair. Although Transnistria has a population of only 555,000, its armed forces are the same size as those of Moldova, leading to a military stalemate. Specifically, the armed forces and the paramilitary units of Transnistria are composed of 4,500-7,500 soldiers, divided into four motorized infantry brigades in the cities of Tiraspol, Bender, Rîbniţa, and Dubăsari. They have 18 tanks, 107 armored carriers, 73 artillery pieces, 46 anti-aircraft installations, and 173 tank destroyer units. The air force is composed of 9 Mi-8T helicopters, 6 Mi-24 helicopters, 2 Mi-2 helicopters, and several aircraft of An-2, An-26 and Yak-18 models.

Aside from the visible Russian presence, there is also a secret Russian military base in the north of Transnistria. Obviously, we would like to have gotten a look at it, but every road leading in that direction had a roadblock across it. And those that try to cut through the woods are promptly arrested as Simon Reeve discovered.

Why do the Russians care about Transnistria so much?

Paranoia fueled by geography and history… You see, geography makes Russia an easy country to invade. Look at the ease with which Napoleon and then Hitler invaded Russia. Keeping Russia is a different matter, but invading is easy. These invasions traumatized the Russian psyche and Russia is, thus, obsessed with buffer zones. This was the point of dominating Eastern Europe during the Cold War and why Russia is so active today in Central Asia and Eastern Europe in attempting to undermine NATO and U.S. influence in the region. Transnistria plays into this as an Eastern outpost for Russia, but more importantly as a buffer for Russian interests in Ukraine.

From the Russian point of view, hostile forces east of the Dniester River could threaten Odessa, and they see no reason to leave the Dniester regardless of how benign conditions appear right now. The Russian view, driven home by history, is that benign situations can turn malignant with remarkable speed.

Well, I was curious too, so my Italian and I went and checked it out.

No country in the world (including Russia) recognizes Transnistria diplomatically, but it nevertheless boasts its own passport, car license plates, currency (the Transnistrian ruble), stamps, flag (probably needless to say that none of these are valid outside of Transnistria), but also a police force, army (as described above) and even a modern-day KGB in the form of the Ministry of State Security (MGB).

However, fair or not, Transnistria is less known for any “must see” attractions than for being a veritable supermarket of drugs, girls and weapons. Firearms from Transnistria are said to have been found in uprisings everywhere from Chechnya to Baghdad.

Allegations of weapons being manufactured in Transnistrian factories abound – from handguns to rocket systems. And it is easy to smuggle here. The border with Ukraine is wide open. One can simply drive down a road like this one pictured below and straight through Ukraine to the Black Sea. One’s product can then be loaded on a boat there and sent anywhere in the world. 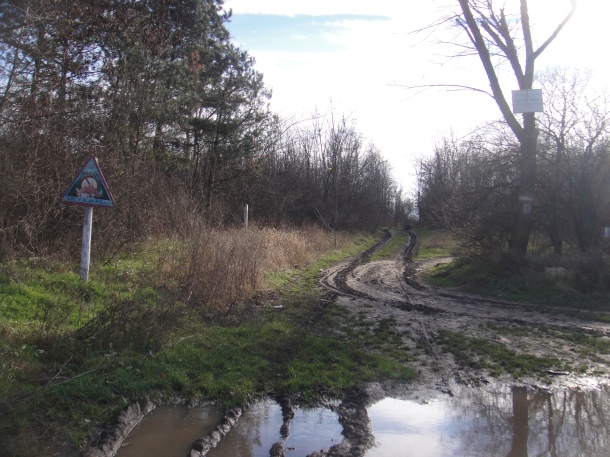 In the interest of balanced reporting, Transnistria claims that such allegations and rumors of arms and drug trafficking are generated by Moldova in an effort to undermine Transnistria and will refer to the European Union Border Assistance Mission that monitors both the Ukrainian and the Moldovan sides of the border. According to them, smuggling to and from Transnistria consists mainly of chicken and alcohol.

Western journalists that visit Tranistria often come here on a daytrip: they take pictures of Lenin, the billboards, the war memorials, and they always write the same cliché afterwards “Transnistria: the last Soviet Paradise”, “the Soviet theme park”. But, I think they are oversimplifying the story for the sake of sensationalism.

Just a light stroll from Tiraspol’s 25 October Street towards Gagarin Boulevard should be more than enough to convince even the most unobservant journalist that this is far from being a communist stronghold. Despite the severe look of Lenin´s red granite statue opposite the Parliament Building, Gazprom branches, jewelry stores, currency exchange offices and the ubiquitous Sheriff conglomerate demonstrate that this is most definitely a capitalist country. As a resident of Tiraspol told me, “We still keep the Soviet symbols because we are proud of our past, that’s all.”

Sheriff may or may not represent the worst in crony capitalism given its alleged connections to Igor Smirnov, Transnistria’s first and only president to date, but it is nevertheless a thoroughly capitalistic enterprise. Sheriff owns many local gasoline stations, a supermarket chain and the telephone company, but also the casino at the city center, the brandy distillery, and even the local soccer team: Sheriff Tiraspol FC! Interestingly enough, soccer is the only thing that links both banks of the Dniester River. The local team has been the indisputable winner of the Moldovan league since 2000. However, Sheriff Stadium is still the only one that fits UEFA criteria, so Tiraspol hosts Moldova´s international matches.

Welcome to the capital of Transnistria – Tiraspol: 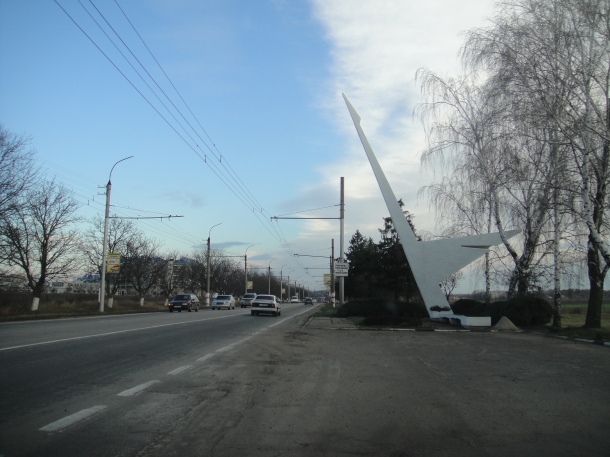 One of the first things that one notices on the outskirts of Tiraspol is the sprawling Sheriff Stadium complex which I discussed above… Attached to the stadium, but outside the frame of this picture, are a five star luxury hotel and a Mercedes dealership:

Here it is at night:

A monument in the suburbs of Tiraspol:

And some of the homes in the suburbs of Tiraspol: 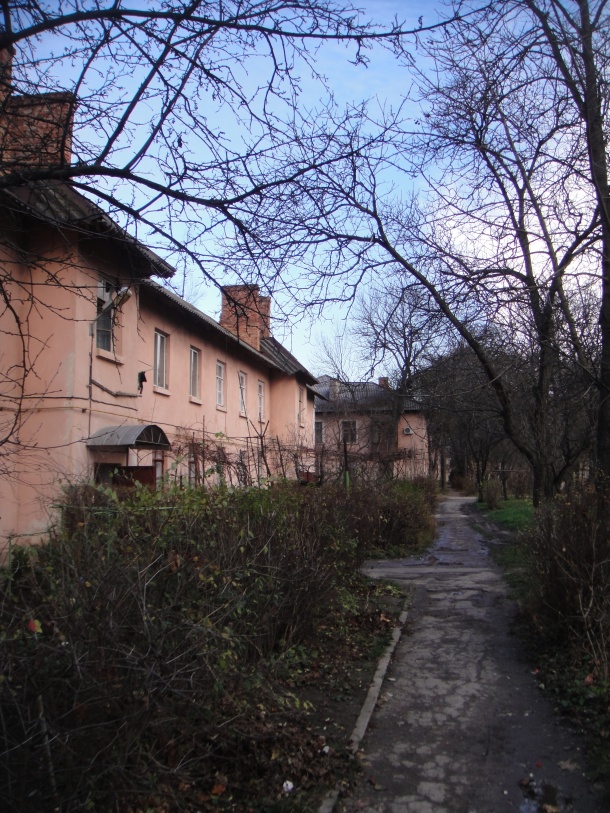 The entrance to one of Tiraspol’s parks:

Some of the Soviet-style imagery still on display:

This is the Kvint factory (a wholly owned subsidiary of Sheriff), where brandies have been made since 1897. This Transnistrian brandy is apparently some of the finest in the world: 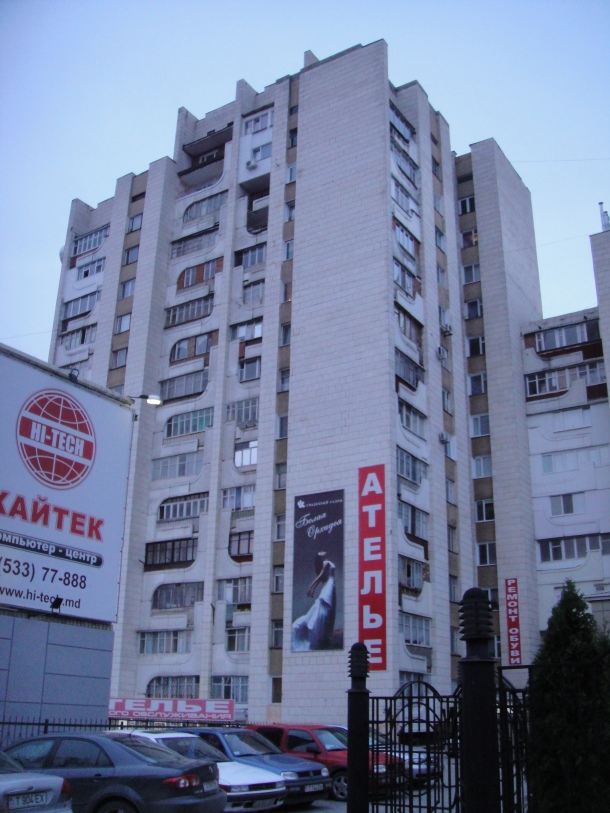 A Sheriff sporting goods store in the Tiraspol city center:

Some of the buildings downtown were rather interesting:

The Lenin statue in front of city hall:

The Palace of the Republic:

A view of the Dniester River which flows through the center of the city:

A billboard featuring Russia’s president Medvedev and president Smirnov of Transnistria shaking hands… Another billboard in the city features the slogan “Let Transnistria, South Ossetia and Abhazia exist!” beneath a picture of those “countries” respective leaders meeting with each other.

The latter two countries have officially recognized Transnistria as an independent state and have established diplomatic relations in return for Transnistria’s recognition of them:

A Soviet T-34 tank in front of Tiraspol’s Heroes’ Cemetery and war memorial: 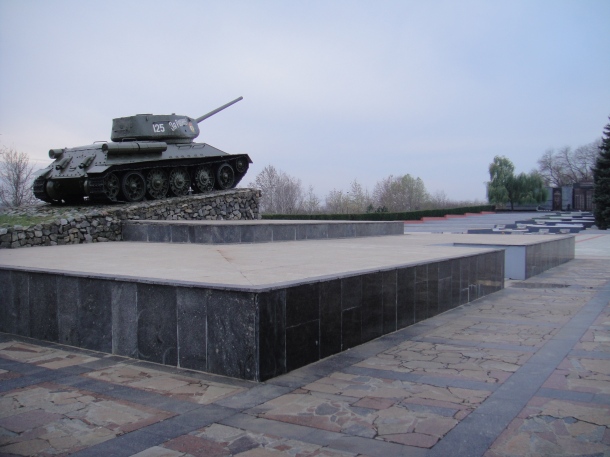 This is a better view (just past the tank pictured above) of the Heroes’ Cemetery with its Tomb of the Unknown Soldier flanked by an eternal flame in memory of those who died on 3 March 1992 during the first outbreak of major fighting:

The names of the dead:

One of the statues at the war memorial:

The site also incorporates a memorial to the Afghan war:

This is the Transnistrian Parliament Building:

A nearby statue of Alexander Suvorov, founder of modern Tiraspol:

There is a lot of negative press out there in regard to Transnistria. Transnistria, of course, has their own version of the truth. Whatever the truth is though, you owe it to yourself to come and visit because Transnistria is a fascinating and very unique place.