By the way, Shusha is the Azeri name for this town whose majority population for most of the past century (until the most recent war) was actually Azeri; it is the Armenians that call it Shushi.

The town used to possess a healthy mix of Armenian and Azeri inhabitants, notwithstanding the destruction of many Armenian homes during fighting in 1920, and this was once considered one of the great towns of the Caucasus, home to grand theaters and caravanserais, mosques and churches and a posh school where the local bourgeoisie groomed their sons for careers in St. Petersburg. Now, 18 years after the Armenians captured the town and burned it, it is still a sad wreck – the Azeri population has gone and only the Armenians remain.

Half the blocks of apartments are occupied while the other half remain burnt-out shells. There is simply insufficient money to demolish these scorched, roofless reminders and what the town’s mostly unemployed inhabitants think as they walk past each day is difficult to say. In one way Shushi is more striking than the completely abandoned or destroyed towns and villages of Nagorno-Karabakh because here life goes on around the destruction.

No matter which direction one approaches Shushi from, one will see destruction before one sees evidence of habitation:

Most people in Shushi reside in apartment blocks such as these:

The shop at the entrance to this set of apartment buildings had great ice cream: 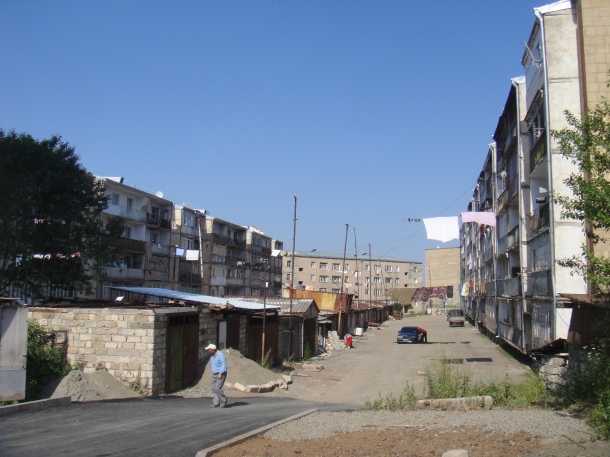 And, of course, the square is surrounded by bombed-out buildings:

A mosque destroyed in the fighting and now abandoned:

Some of the buildings were obviously attractive before they were destroyed in the fighting. It’s a pity that buildings such as this were destroyed as opposed to the ugly, gray Soviet-style apartment blocks:

This picture demonstrates the interesting layer cake that is Shushi… In the foreground is a mansion that was burned and destroyed in the fighting while in the background are layers of squalid apartment blocks now occupied by Armenians:

A look back at Shushi on the way to Stepanakert… The former capital of Shushi is about fifteen minutes up the hill from Stepanakert and lies just off the main road to Goris from Nagorno-Karabakh: 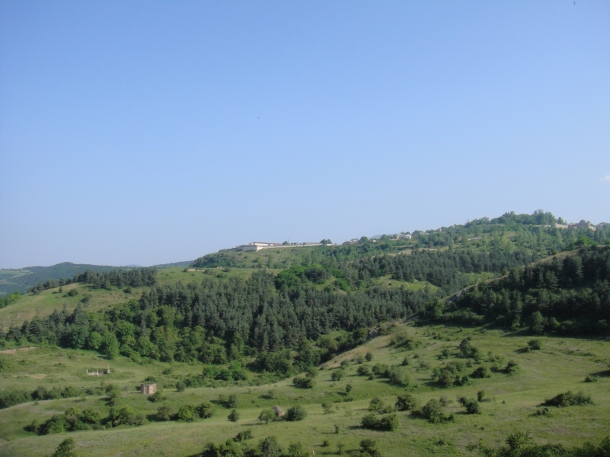