Unfortunately, despite its impressive history (Yerevan is older than Rome) and reasonably appealing center, Armenia’s capital of Yerevan is not a particularly attractive city. Too much of the city is comprised of crumbling, gray Soviet-era apartment blocks such as those pictured below… This dreary Soviet influence is due to the rapid expansion of the city during that epoch when its population increased 30-fold: 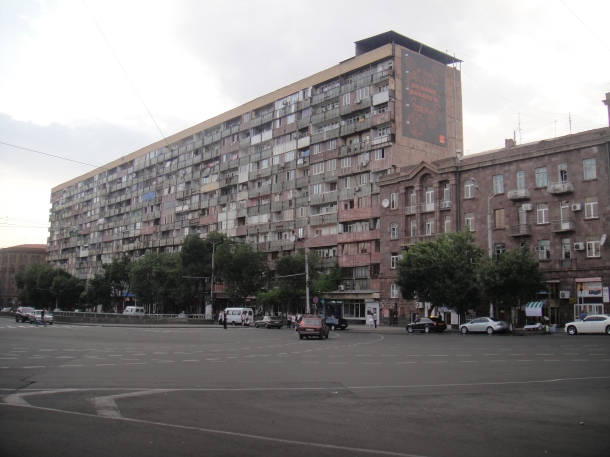 And although Yerevan is far more advanced than Armenia’s countryside, where I observed scenes comparable to rural Afghanistan, there are some fairly primitive parts of the city:

But now that you understand what the majority of the city looks like, allow me to cover some of the highlights…

Known as Lenin Square during the Soviet times, Republic Square retains its status as the heart of the city: 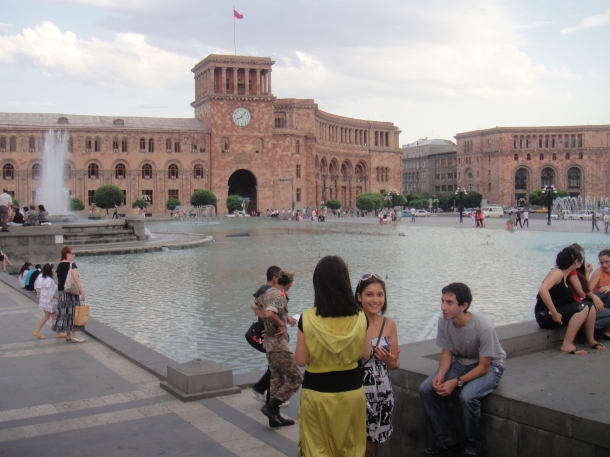 The building in the background is the National Historical Museum on Republic Square, but I really took this picture because of the chick in the foreground:

As an interesting “oh by the way” – Underneath Republic Square is a large bunker built during the Cold War to protect officials from danger in the event of nuclear attack. The bunker remains closed to the public.

Just off of Republic Square is North Avenue… North Avenue is almost certainly the poshest street in Yerevan, lined with Western shops and people out to be seen: 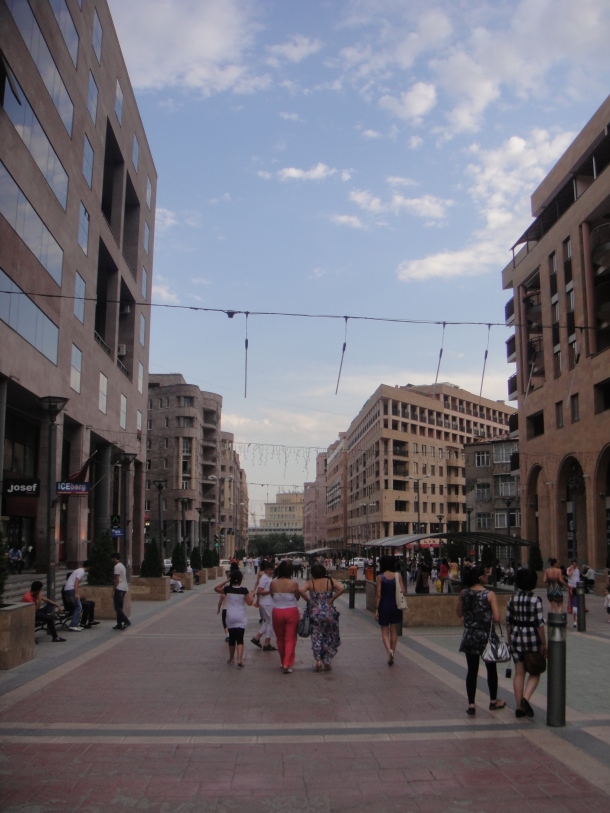 And at the end of North Avenue is Yerevan’s Opera House and The Cascade… The Cascade was designed to be a large artificial waterfall tumbling down from a war memorial at the top, but it was left uncompleted at the demise of the Soviet Union: 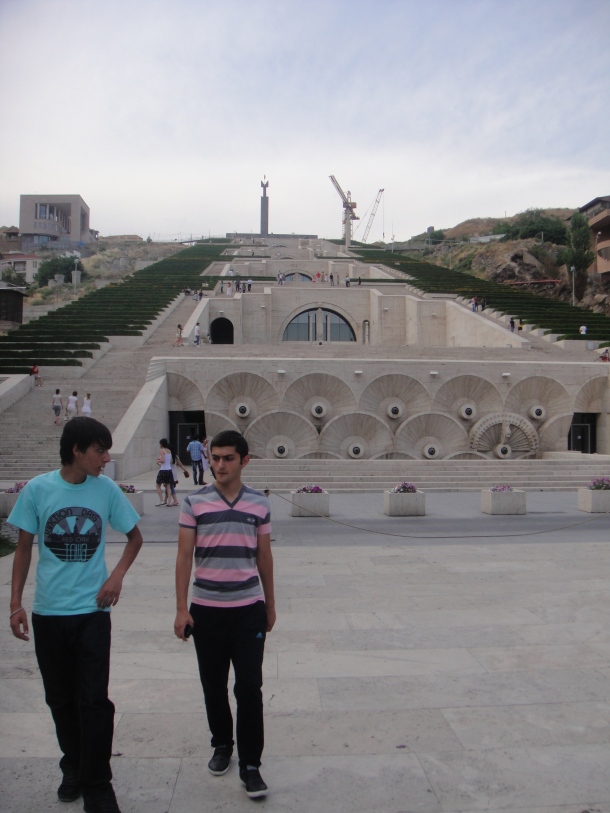 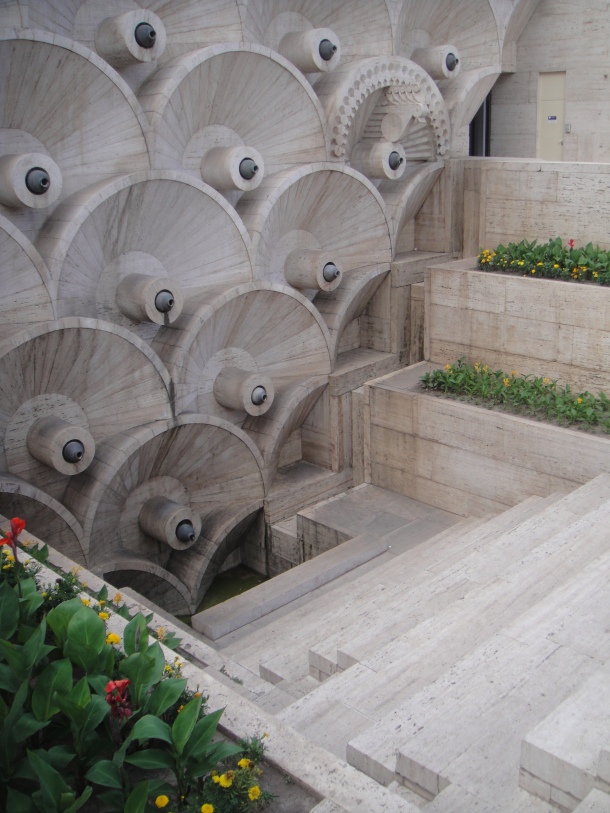 It’s quite a hike to the top as there are more than 500 steps to climb, but the views are worth it.

Here is a video I shot near the top of the Cascade that covers both the monument and the city:

A memorial at the top of The Cascade:

Along Tigran Mets… Tigran Mets is named for King Tigran II who ruled Armenia from 95 BC to 55 BC and it is one of the main streets in Yerevan:

The cathedral in the background was completed in September of 2001 to celebrate what was officially the 1,700th anniversary of Christianity becoming the state religion. Regrettably, the cathedral is quite ugly inside and out:

This dramatic building is the former Russian cinema and is now the Ararat clothing bazaar. The two parts of the roof symbolize the two peaks of Mount Ararat: 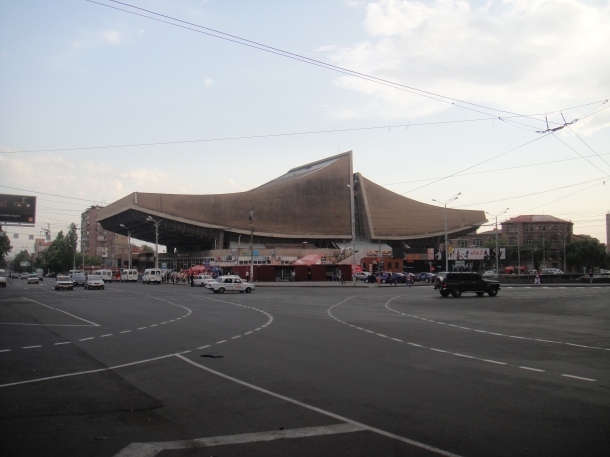 This attractive train station dates from 1956, although following the closure of the border with Azerbaijan it now sees very little traffic. Unusually, at the top of the spire in the center remains a purely Soviet symbol. It is the coat of arms of Soviet Armenia and depicts the five-pointed Soviet star above Mount Ararat with bunches of grapes and ears of wheat below:

Some random scenes of Yerevan to give you a feel for the city: 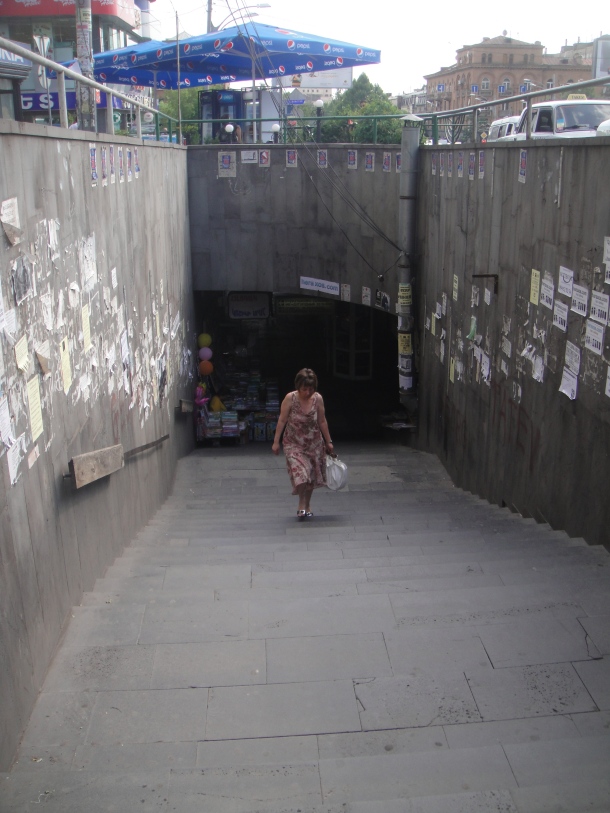 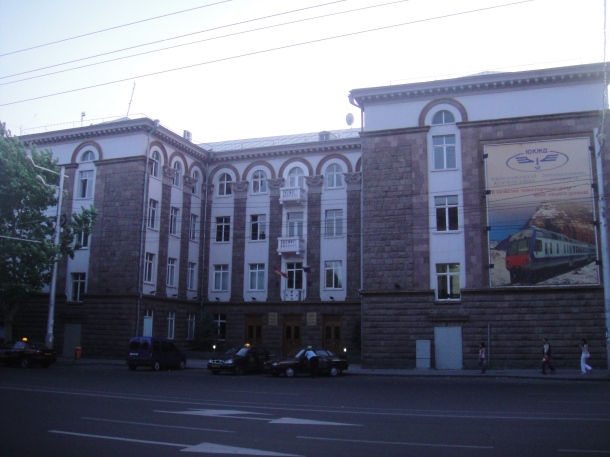 To the west of the Hrazdan River, which cuts through Yerevan, is the Genocide Memorial and Museum which serves to commemorate the Armenian Genocide at the hands of the Turks which left up to 1.5 million Armenians dead in a period during World War I and shortly after:

The stele reaching to the sky symbolizes the “survival and spiritual strength” of the Armenian people. The deep cleft that runs the length of the stele is intended to symbolize the separation of the peoples of western and eastern Armenia while at the same time emphasizing the unity of all Armenian people. To the left of the stele is a ring of 12 large inward-leaning basalt slabs representing the 12 lost provinces of western Armenia.

The inward-leaning form of the slabs suggests figures in mourning and at the center of the circle burns an eternal flame: 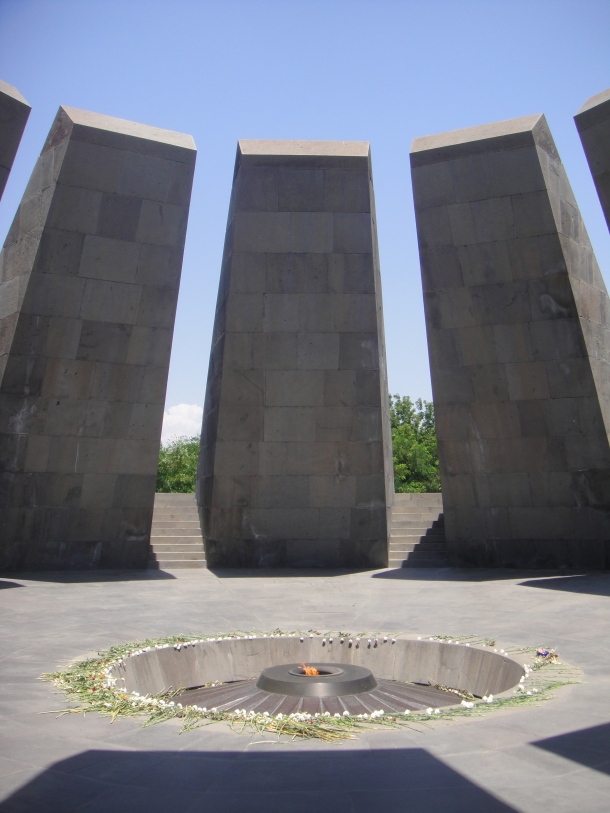 There is now a museum attached to the monument as well. The museum includes photographic gems such as Turkish soldiers grinning next to beheaded Armenians as well as other such pleasantries along with reports from foreign publications about various aspects of the genocide and the maltreatment of the Armenians by the Turks.