The following is straight from the notebook I had with me at the time and, I believe, helps give a feel for what it is like walking around Herat: 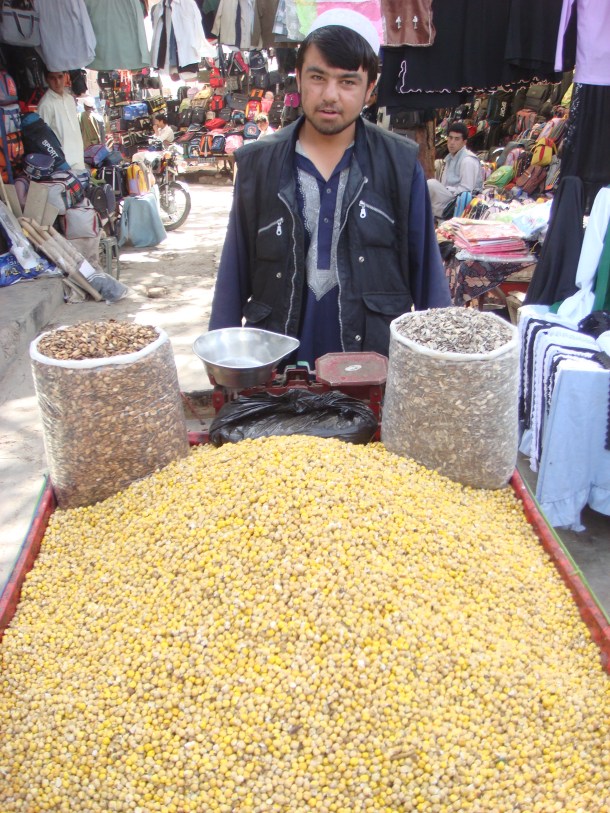 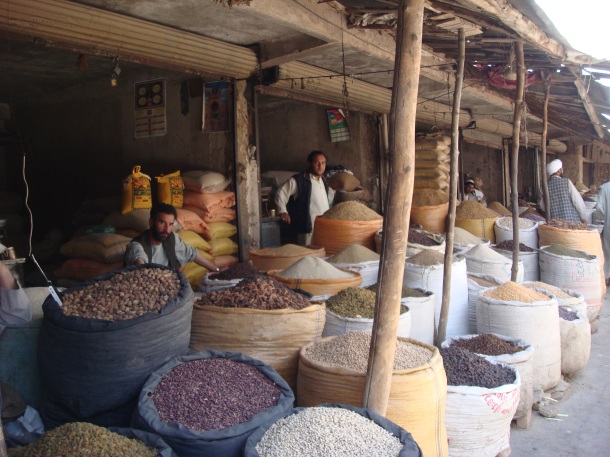 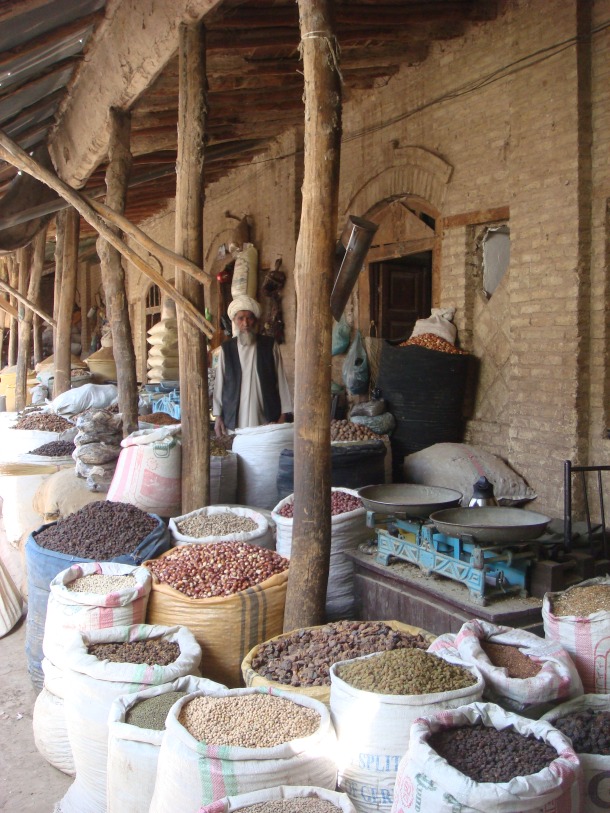 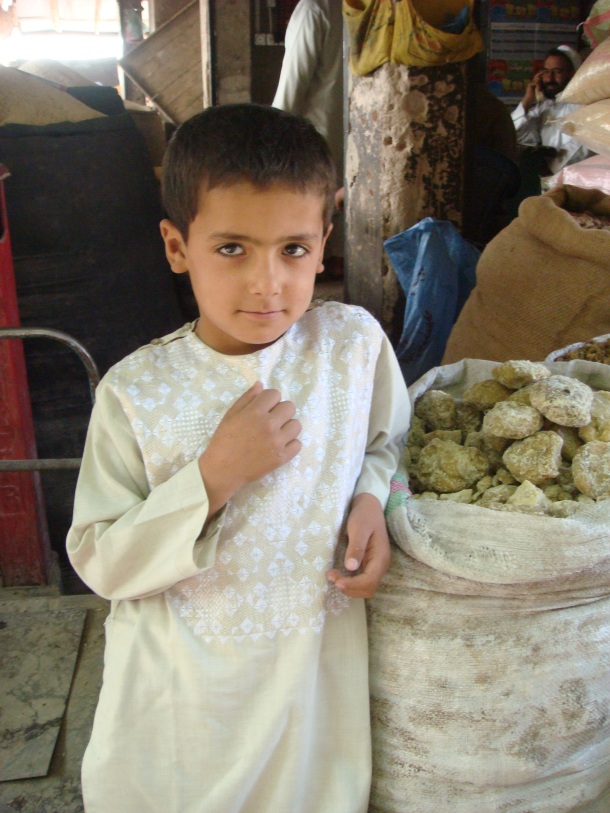 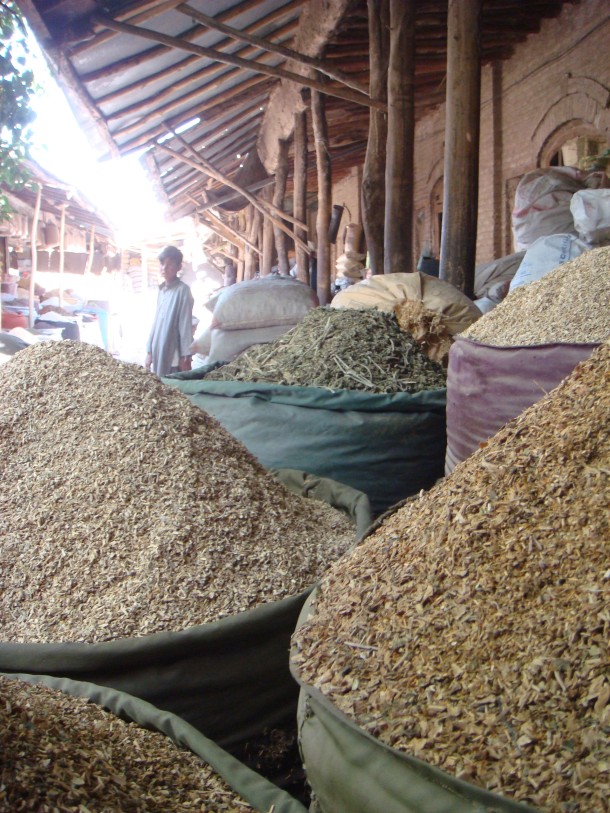 One thing that stood out to me while exploring Herat was the level of ethnic diversity on display.  In other parts of Afghanistan an area will be dominated by, say, the Pashtuns or the Hazaras and that is essentialy all you will find there.  Not so in Herat… 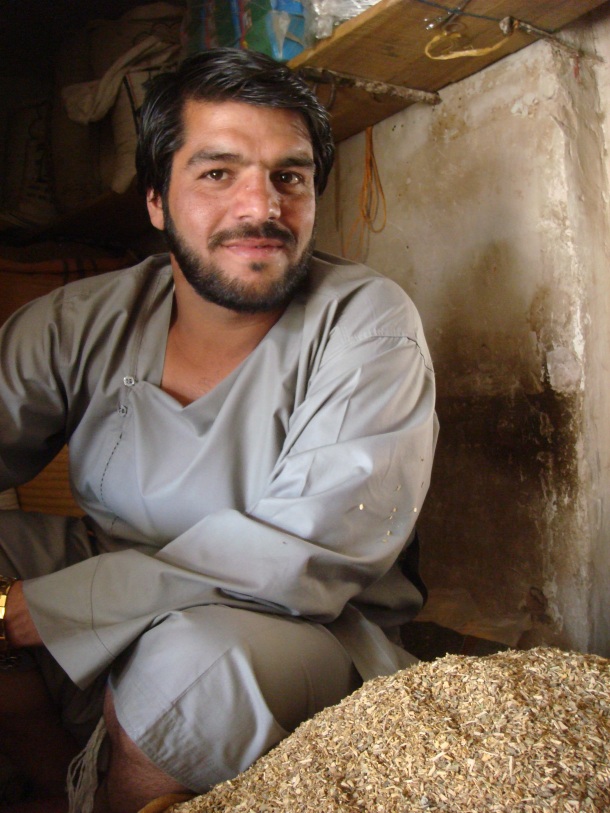 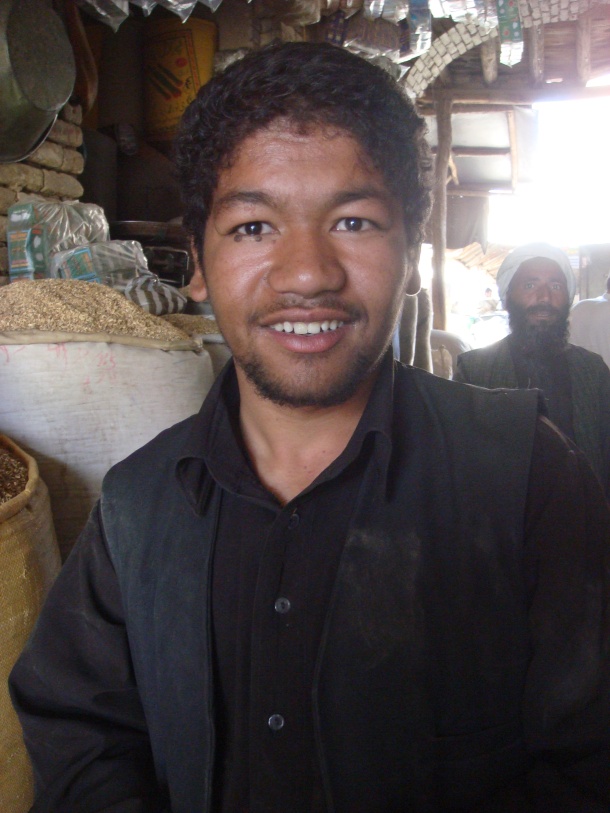 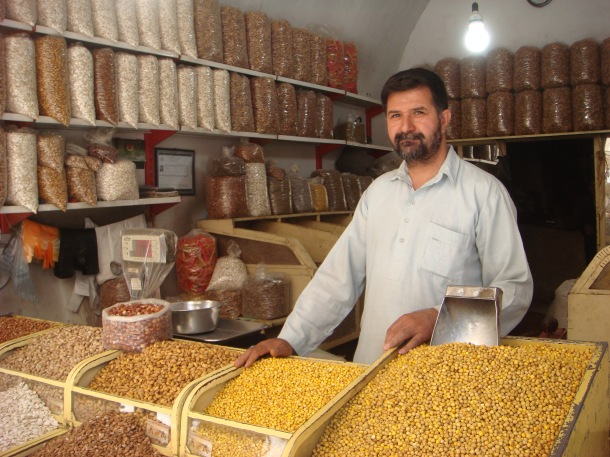 Herat is covered with buildings which suffered damage in the various military conflicts during the last few decades and have yet to be repaired: 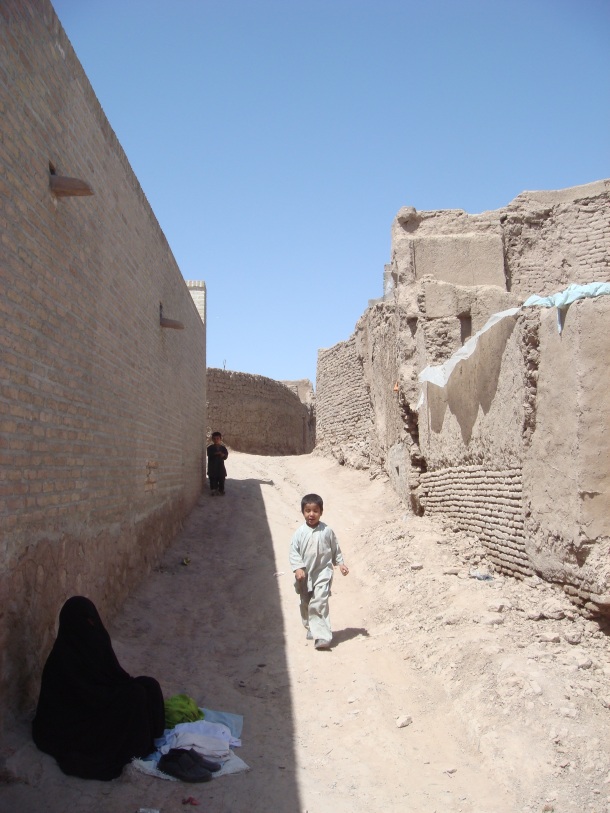 Also known as the Herat Old Fort or the Citadel of Alexander, the Citadel of Herat dominates a hill to the west of the old city. It is said that this citadel was originally constructed by Alexander the Great and the archaeological evidence seems to support that assertion. It has recently reopened to visitors after being used by the military to store ammunition for the last few years. This being Afghanistan, you’re free to roam and climb around all you want and you’ll be the only tourist there.

There is a very modest entrance fee and be sure to pay the Afghan price which should be the equivalent of a dollar or so rather than the douchebag Westerner price of $5 or more which will go straight into someone’s pocket. (I’d figured out how things work in Afghanistan by this point).

A “guide” such as this friendly fellow below will show you how to enter the Citadel of Herat and will show you a couple of the more interesting sites before leaving you on your own. How awesome is his vest? I should have bought it off of him… 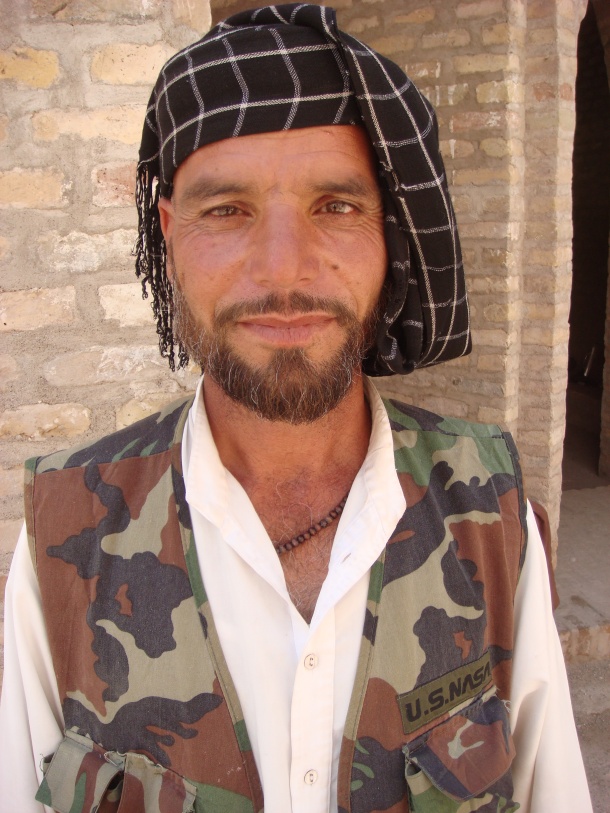 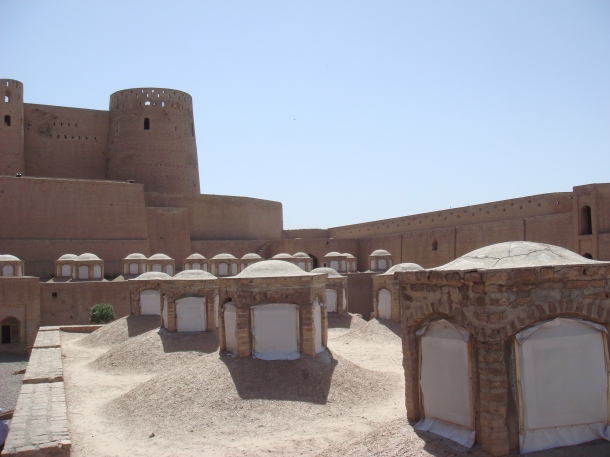 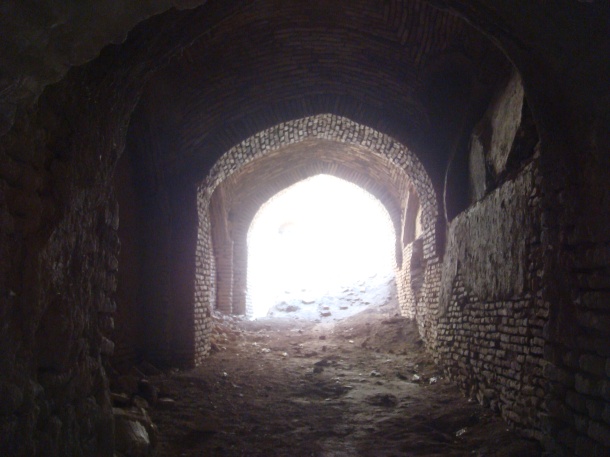 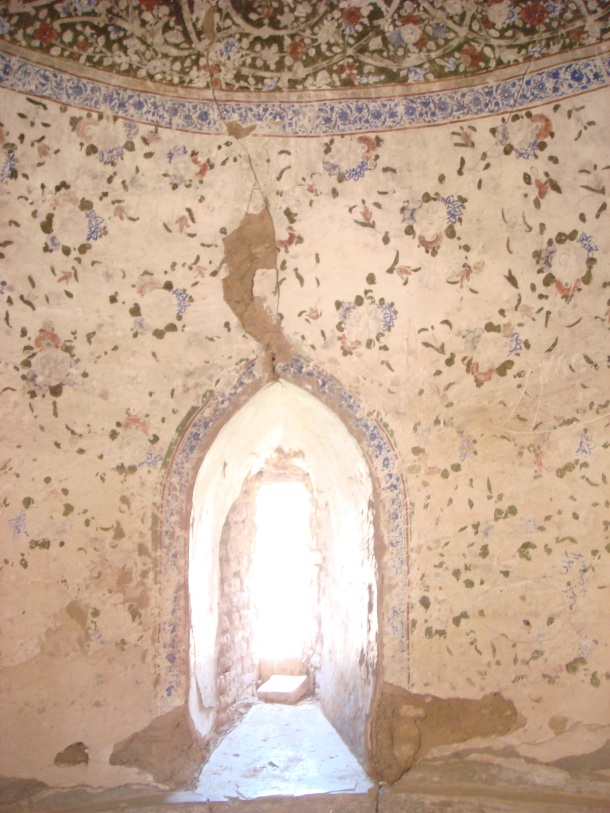 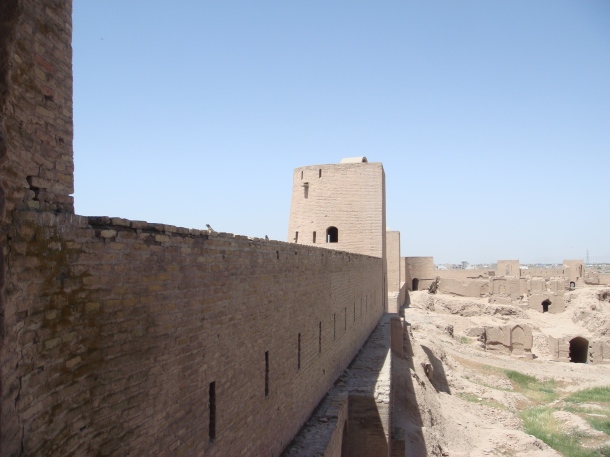 The views of Herat from up in the towers are probably the best you’ll get anywhere in the city (unless you’re a bird).

I was told that the Taliban were storing a large quantity of currency in the Citadel of Herat when NATO invaded in 2001. As the Taliban began to disintegrate during the invasion, locals stormed the citadel and during heavy fighting, the room containing the currency was hit by a stray artillery round, sending millions of dollars of currency billowing out over the city below. 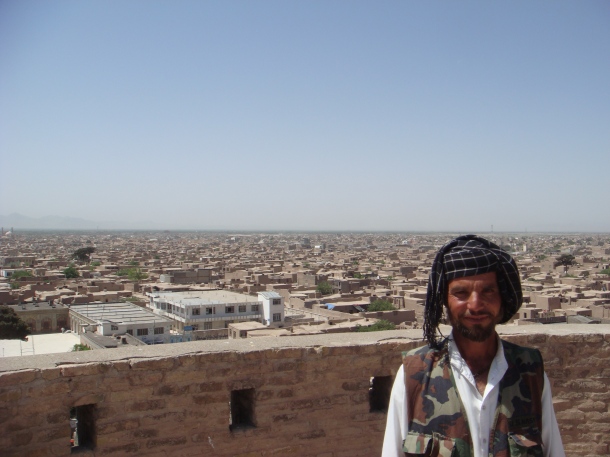 Obviously, some of the exterior walls and towers are more modern.  However, the portion of the citadel slowly being excavated in the middle is from the time of Alexander: 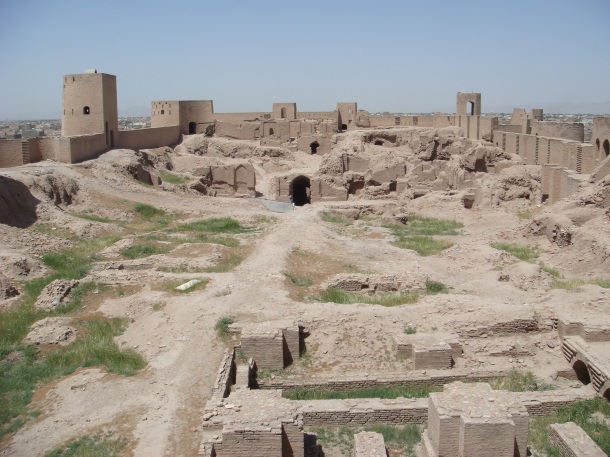 Back out on the streets… 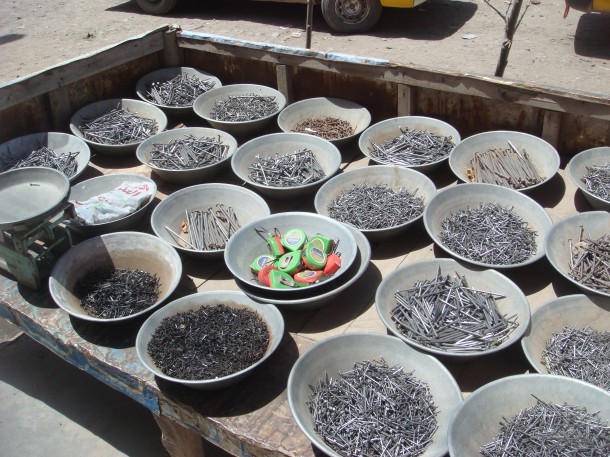 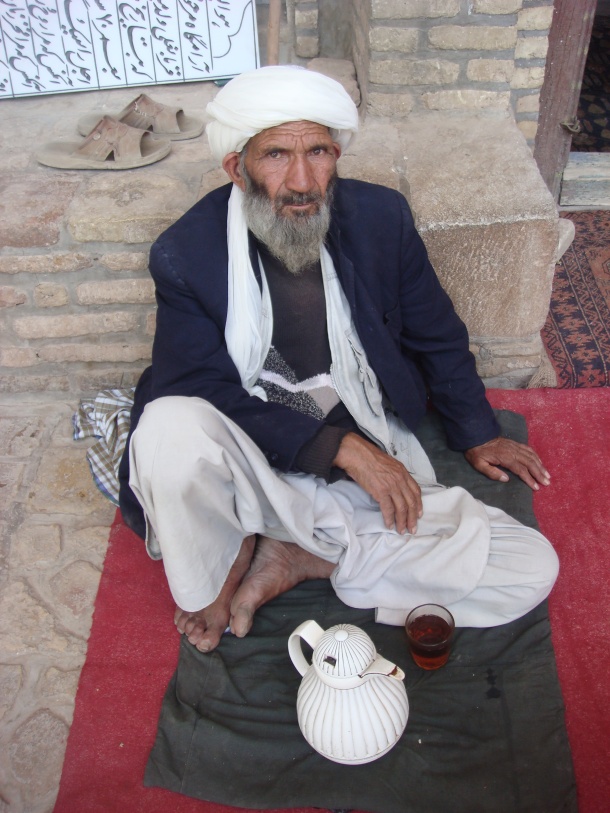 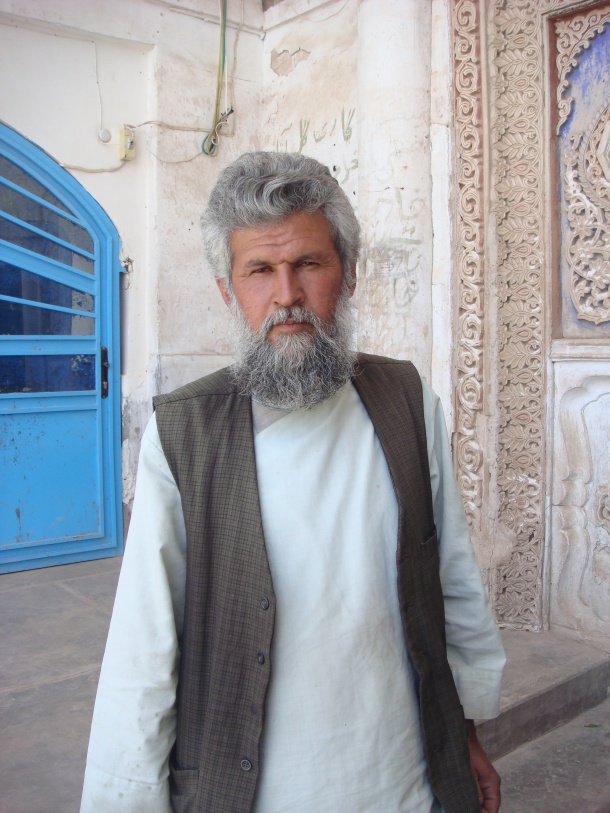 North of the Citadel are the Minarets of Sultan Baiqara (It’s a good thing I took notes). Commissioned by Gowhar Shad and once comprising a collection of over a dozen minarets, a mosque and a madrassa, all that is left are ruins. The 4 minarets are what remains of the madrassa.

Of course, it doesn’t help that the Iranians built a road that cuts directly through them, two on each side, causing the ground to rumble whenever a car or truck goes by. Nor did it probably help when the British used explosives to clear much of the area in 1885 to get a good line of sight for their artillery against Russian invaders who never came: 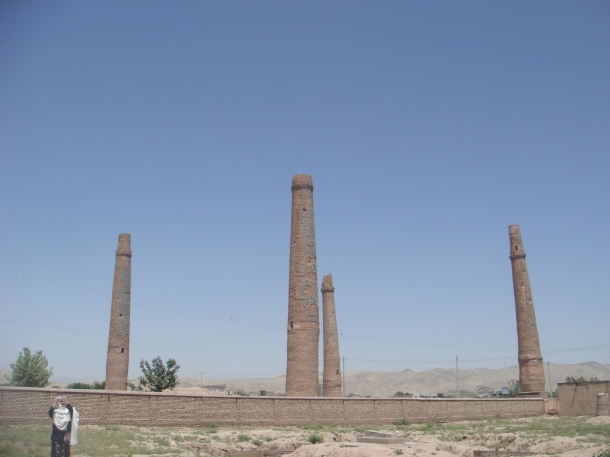 To get inside the area of the minarets, one is required to cross an old minefield.  Thus, not many individuals venture inside to see them.  However, I saw this as all the more reason to cross the minefield and check them out.

And I was not disappointed.  Below, inside this exquisitely carved stone coffin,  are the remains of a queen.  In any Western country, this would be a crown jewel for  a national museum.  In Afghanistan, it is left to decay in the elements.  And could be stolen at any time by someone with a truck. 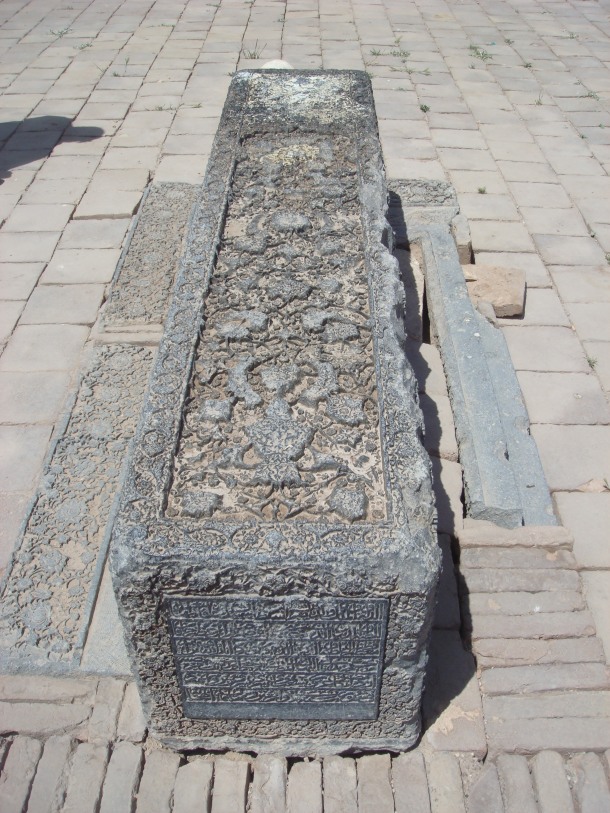 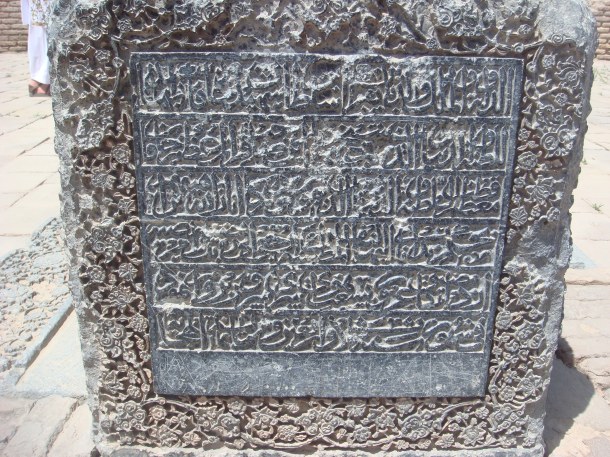 Now, it just so happens, that this area is extremely popular with junkies.  The police won’t come here because they won’t cross the minefield and so if you’re a junkie, you’re relatively free to go about your business.

Mixed in with all the discarded syringes were countless cigarette butts. I thought this was funny because the junkies are gambling with a trifecta of death – heroin, cigarettes and a minefield: 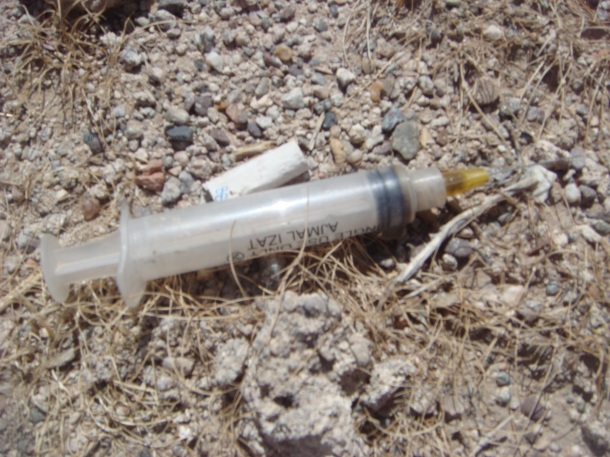 Certainly not everyone in Herat is down and out though as these garish new homes demonstrate: 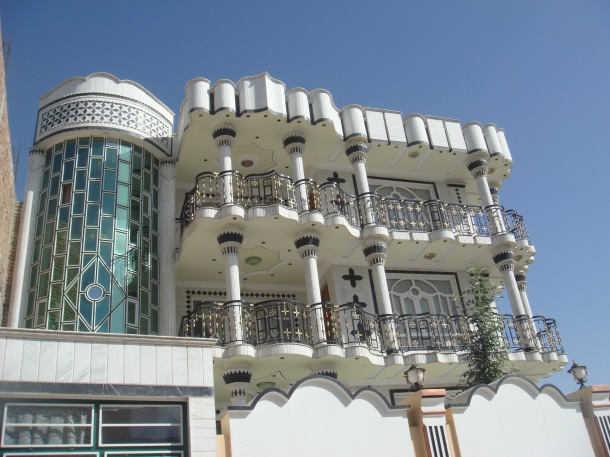 Herat lies on the ancient trade routes of the Middle East, Central and South Asia. And these routes are just as strategically important today. The city is the gateway to Iran, collecting the highest amount of customs revenue for Afghanistan.

And where do you think all of that heroin produced in Afghanistan goes?  It gets smuggled to Pakistan, Iran and Turkmenistan by guys that live in homes like this: 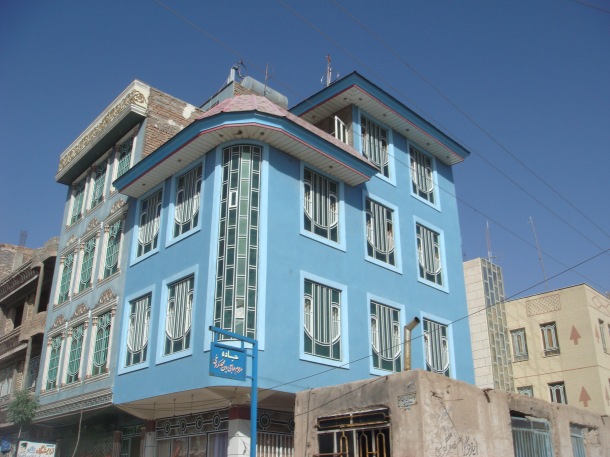 Back in the hills bordering Herat is one of Afghanistan’s holiest sites – Gazar Gah. Run by Sufis from the Qadirriyah order and dedicated to the 11th-century saint and poet Khoja Abdullah Ansari, it receives hundred of pilgrims from across Afghanistan daily. 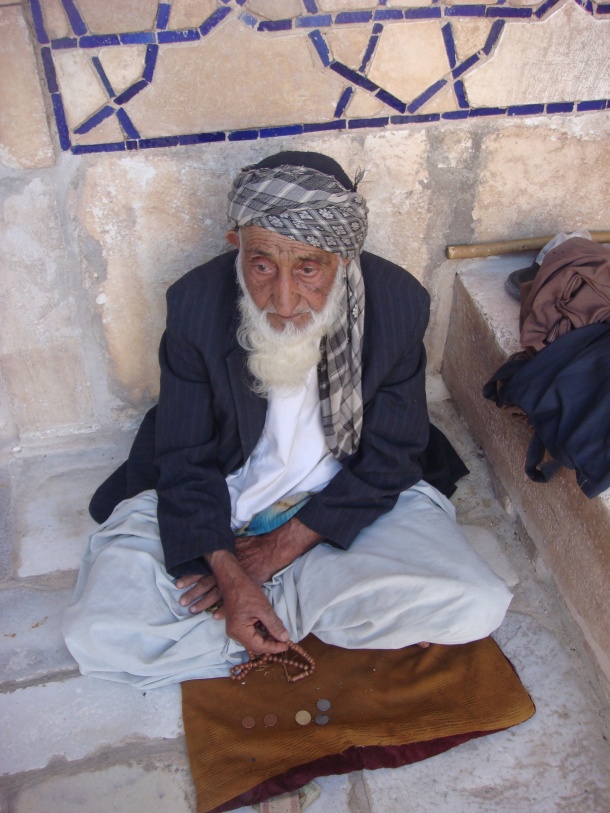 Many of the government forces are far more progressive than the population at large. This soldier spoke English and encouraged me to take pictures of anything I wanted – even women. 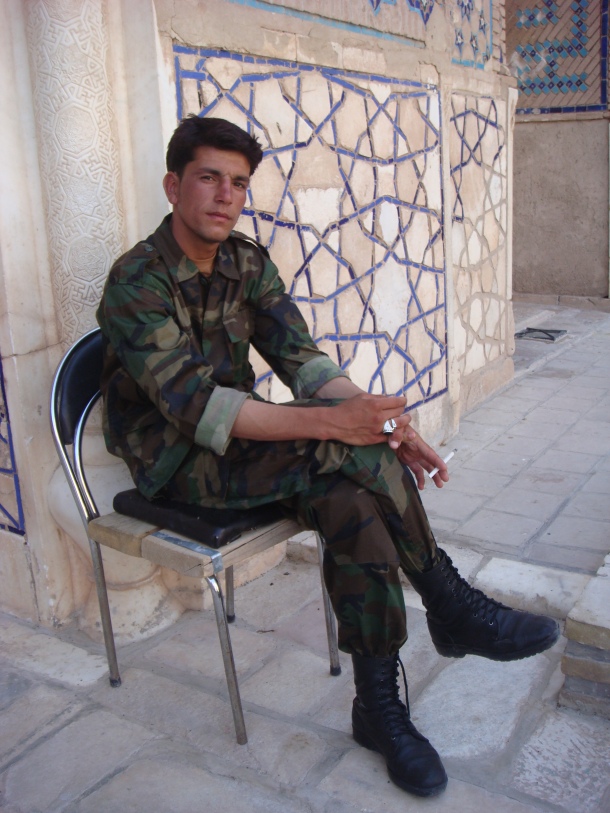 Skeptical of his statement that it was OK to take pictures of women, I popped off the shot below in a clandestine fashion. The woman on the end, upon just seeing the camera in my hand, made it quite clear to my interpreter that it was emphatically not OK to take any pictures of them. “Oh yes, of course, I would never do such a thing…” 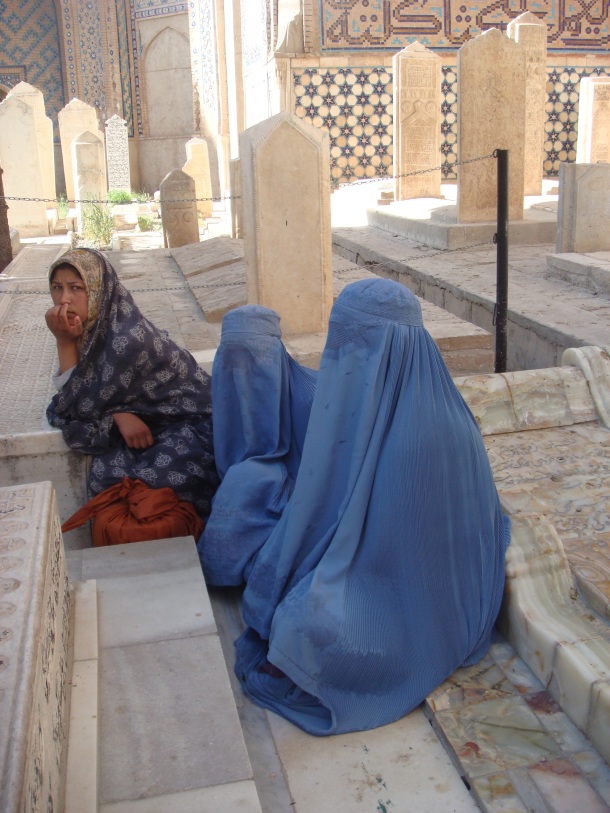 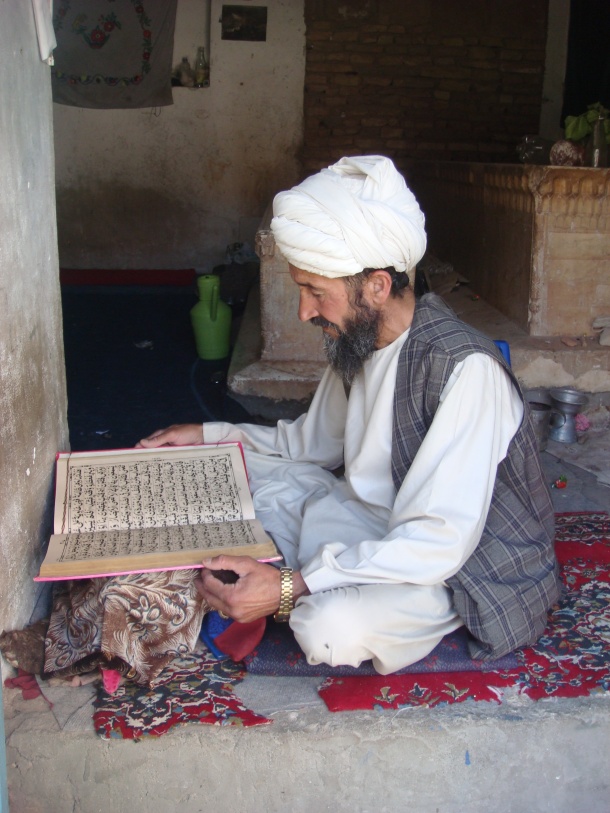 There are several other graves worth noting in the shrine. Amir Dost Mohammed, the survivor of the First Anglo-Afghan War, is buried to the left of Ansari’s tomb, having died soon after capturing Herat in 1863. And one of Sultan Baiqara’s sons also is buried here.

To the southwest is another shrine – the Zarnegar Khana. Built during Sultan Baiqara’s time, it is a retreat for the shrine’s Sufi adherents, who hold their zikr rituals inside. The Zarnegar Khana was closed for restoration when I went, but these guys were sitting outside which made it more than worth it to me: 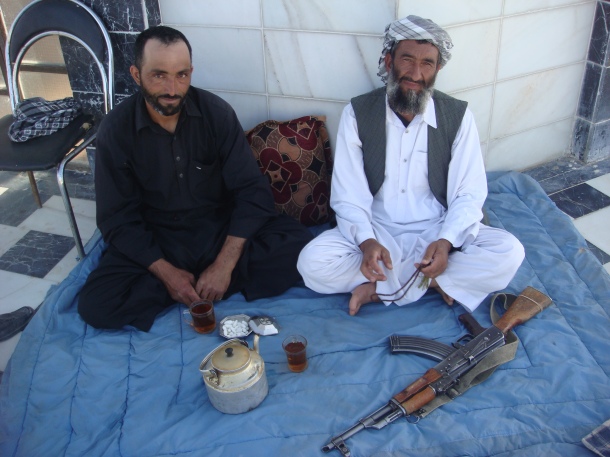 The Afghan National Army and the Afghan National Police provide security in Herat as well as the whole province. There is also the presence of the International Security Assistance Force (ISAF) peacekeeping forces in the area, which is led by Italy.

That’s right, the Italians are here – about 800 of them – because this is presently one of the quietest parts of Afghanistan.

The libertarian side of me says that’s a good thing because the Italians will not bother anyone and will support the local economy by bribing the Taliban not to attack them. And at least some of the locals really like the Italians being around as I discovered after talking to three students sipping Pepsi cans filled with vodka smuggled off of the Italian base.

Knowing Italians as I do (my wife is an Italian from Rome), and considering the fate of Italy’s former colonies such as Somalia, every other part of me weeps for the future of Herat…