Timber companies have always faced a problem with moving logs from the stump to sawmills often many miles away… This is particularly of relevance in a state such as Maine where there are still many vast tracts of wilderness.

Historically, oxen and horses dragged the logs to streams and rivers that would then carry them down to the mills. Left alone, many of the newly cut logs would run aground on sandbars, become stranded on riverbanks or jam in river rapids.

Thus, men serving as log drivers, called “river pigs,” began in the spring and worked as long as logs remained in the river (or until the rivers froze over again): 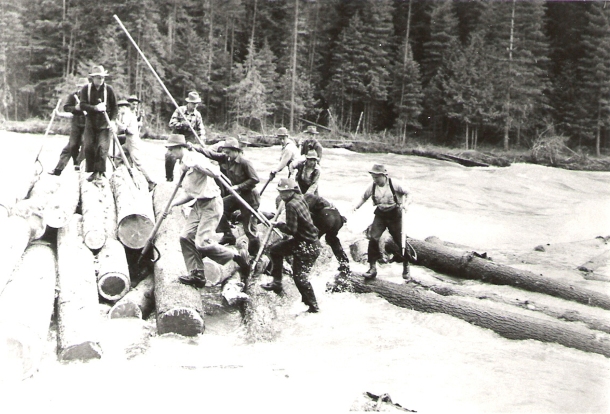 An epic logjam demonstrates the need for such men:

In the 1970s, timber and paper companies in Maine were forced by environmental and other concerns to halt the perilous river-run log drives.

This cessation may have taken the logs out of the rivers and undoubtedly spared the lives of many of the hardy breed of men who once made a living unjamming the logs in roiling waters. However, the alternative to the rivers are roads, lots of them, mostly unpaved – a huge network that has opened up the wilderness.

The most famous of these, The Golden Road, runs from the town of Millinocket around the top of Moosehead Lake to the Quebec border. It took nearly 1,000 workers almost five years to build the private, 96-mile, mostly unpaved road. Completed in 1975 and originally called the West Branch Haul Road, the Golden Road reputedly earned its current name due to being one of the forest products industries’ main arteries into North America’s largest contiguous forest.

A grizzled old man, who turned out to be a former lumberjack and native of Maine, told me when we arrived in the Maine Highlands, “The Golden Road represents so much to Maine. The thing about it is, it’s dangerous. It’s like this road without rules. But that, and the true wildness of it, are what makes it great.”

Could there be any doubt that The Velvet Rocket needed to explore The Golden Road?

After swinging into the interior of Maine, it does not take one long to notice the economic significance of the timber industry in this region. Below is the Newport Log Yard: 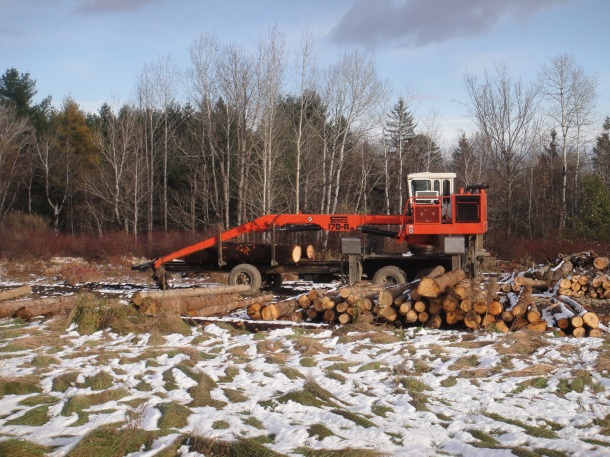 By the way, the pictures in this post are presented in chronological order, so you’ll have at least a loose sense of where I was when taking them.

A skidder waiting to be put to use again after the first snowstorm of the season:

Pleasant River Lumber – One of the smaller logging operations in the area. Some are much larger than this:

One of many trains transporting the primary export of the the Maine Highlands out to distant buyers:

A lumberyard on the way to Millinocket:

Millinocket can be seen below… Once crucial to the timber industry, Millinocket is fighting for its future. For generations, forestry-related companies provided the major support for the local economy, but dramatic downsizings have left them a shadow of their former selves and have resulted in a shrinking population in the area’s towns. Half the locals hope for the resurgence of the local mills and woods-based work; the other half are pushing for a tourism-based economy: 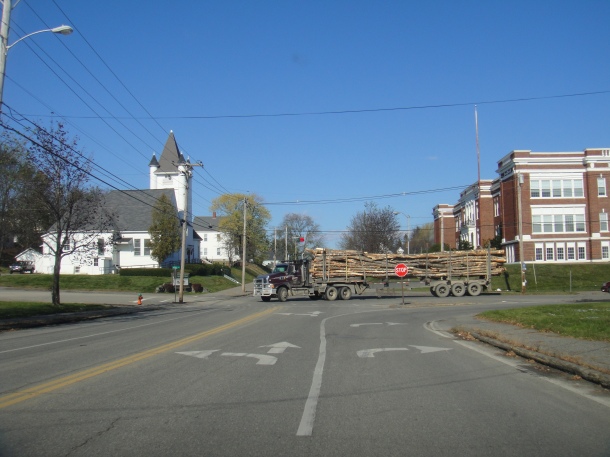 For a vision of the region’s timbering past, wander into the Millinocket Post Office to view John W. Beauchamp’s 1942 oil-on-canvas Logging in the Maine Woods, a New Deal mural: 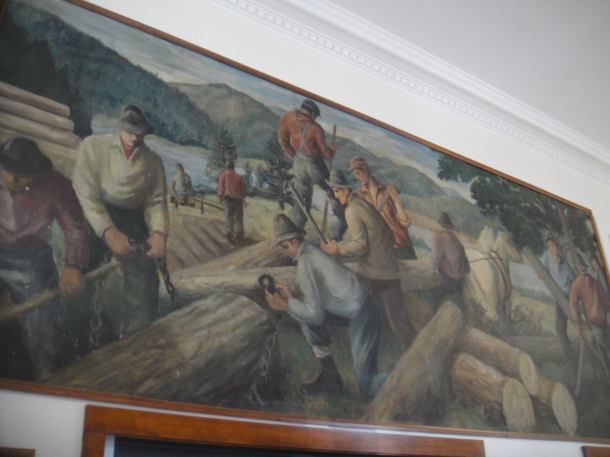 The entrance to The Golden Road is just outside of Millinocket:

At the start of The Golden Road can be found the corporate offices of the Pelletier Brothers: 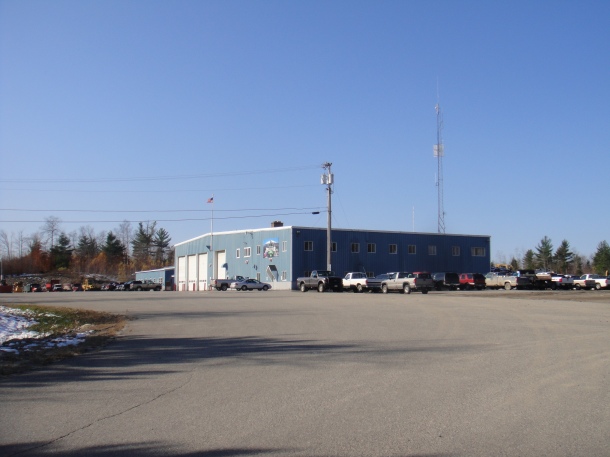 The Pelletiers, seven brothers and numerous grandchildren descended from Gerald Pelletier, who began hauling wood out of the Katahdin region woods in the 1950s. The company incorporated under his name in 1976 and formed Pelletier Bros. Inc. in 1994, eight years before the family patriarch died in 2002.

The Pelletier family has been made famous by the Discovery Channel show, American Loggers, which chronicles the family and their ups and downs in the timber industry of The Golden Road area.

Some of the logging equipment belonging to the company: 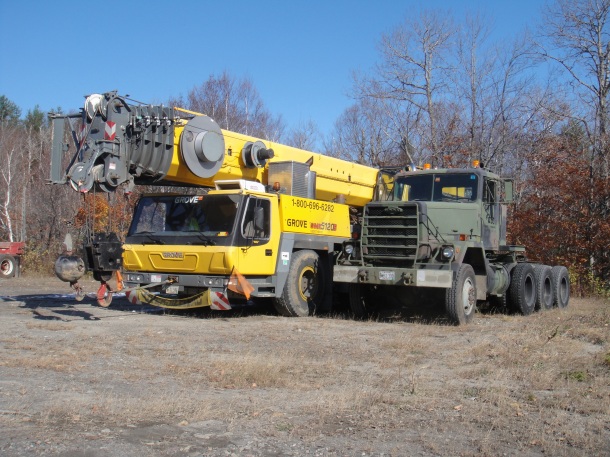 Soon past the Pelletier operations, the landscape and The Golden Road open up… Red-and-white mile markers tacked to trees tick off the distance – if you can spot them:

Countless side roads branch off The Golden Road to areas that have been logged. These roads will eventually become overgrown and then disappear until the area is logged again:

It can be interesting to venture down these side roads as they will take one deeply into the middle of nowhere:

As one local put it to me, “Out there, trees grow, die, fall and rot, never having been seen by anyone.”

This is a real wilderness:

While deep in the forest, we encountered many animals that were unafraid of us – moose, beavers, deer, black bears… One must travel to fairly remote stretches of the planet to discover areas where animals have not yet learned to fear humans: 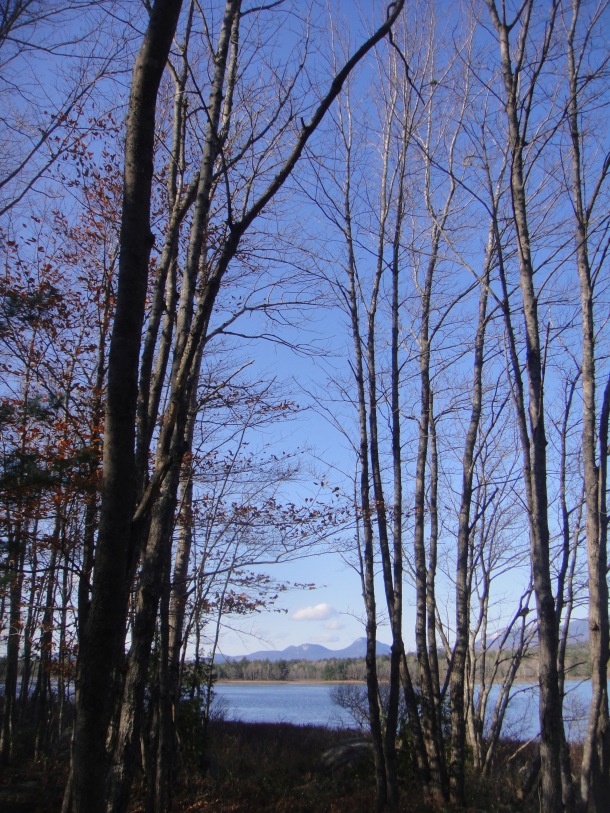 Exploring down another side road:

Through a partnership with The Nature Conservancy (TNC), 20,000 acres of the Katahdin Forest Management forestlands have been preserved as the Debsconeag Lakes Wilderness Area and an additional 195,000 acres were placed under conservation easements, which guarantee public access, traditional recreational uses, sustainable forestry, and no future development: 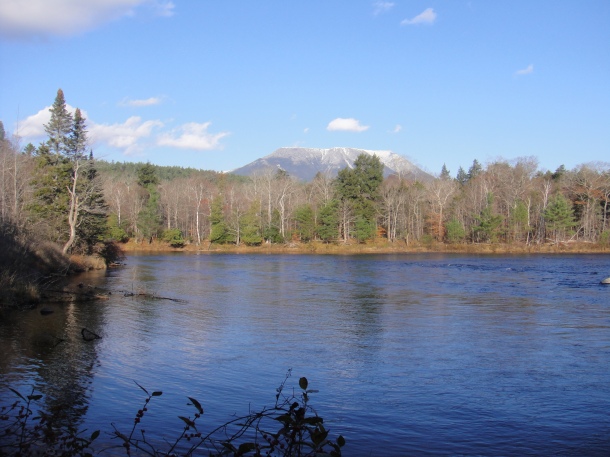 In the distance is Baxter State Park and the terminus of the Appalachian Trail: 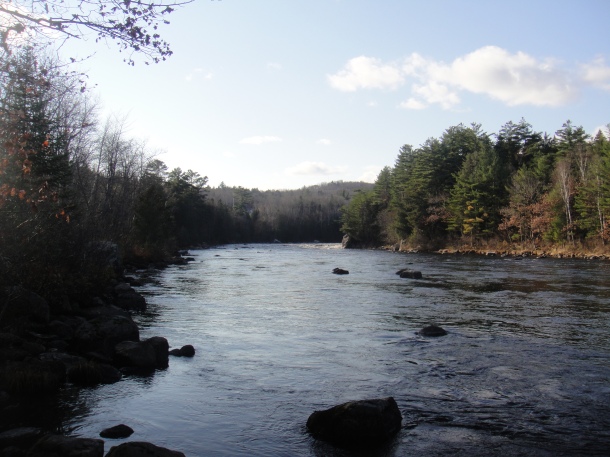 Continuing down The Golden Road: 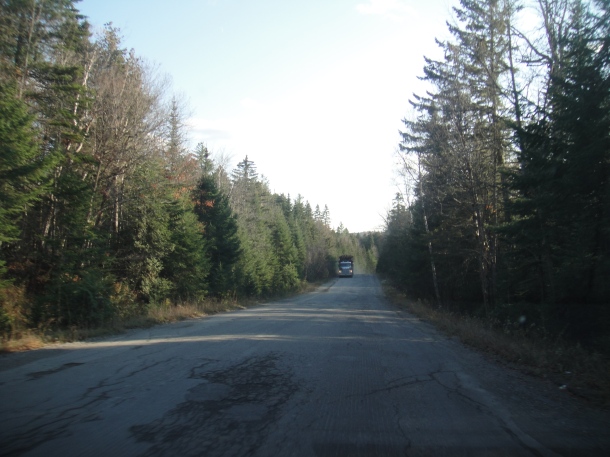 When you meet a logging truck along the way, pull over and let it pass. If it’s loaded it might be carrying as much as 250,000 pounds of logs and will not be particularly nimble.

I rounded one blind corner and nearly kissed bumpers with a heavily-loaded lumber truck that was careening downhill, and well onto my side of the road. Such moments of excitement remind one that the logging trucks own The Golden Road – in more ways than one.

But, seriously, as they barrel along, give them some room – and some slack as well. After all, it’s pretty cool of the timber companies to allow us access to their private lands. You rarely see that out in California where your editor is from:

When driving from Millinocket, you’ll come to a fork in the road at about 38 miles.

Following the road forking to the right, will take one to the North Maine Woods and all the way to Canada: 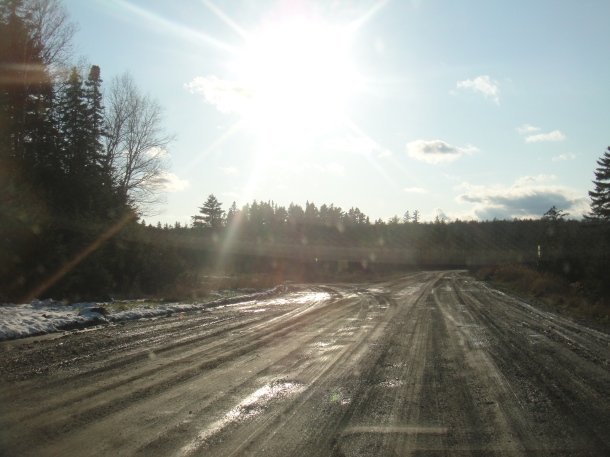 Taking the fork to the right: 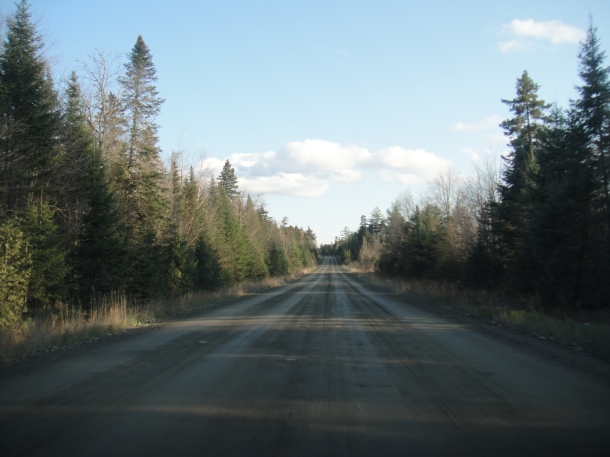 Considering the size of some of the equipment traveling on The Golden Road, it is surprising to me that the small wooden bridges, such as this one below, do not fail more often:

Entering into the North Maine Woods, alongside Caribou Lake – a remote region that comprises landowners from individual families to private corporations, conservation organizations and state-owned land. A stop at the checkpoint is required: 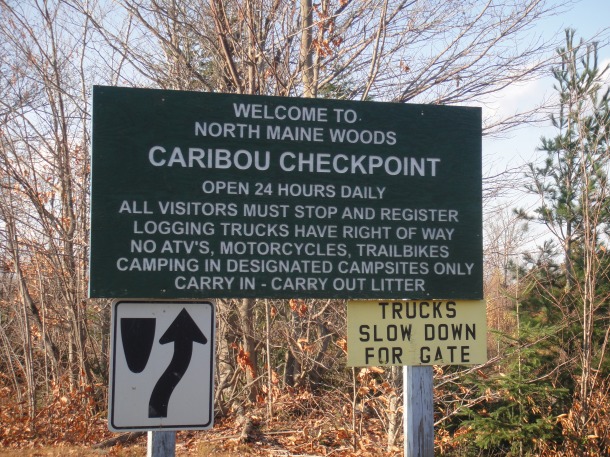 The North Maine Woods Caribou Checkpoint… The next stop is Saint Zacharie Route de la Frontière on the Canadian border.

Unfortunately, the Canadian port of entry closed and the U.S. port of entry is only open to commercial vehicles. Also, drivers must have a verifiable reason to be using this port of entry rather than an alternative:

Logged trees waiting to be picked up along The Golden Road:

Some of the scenery along The Golden Road… I didn’t even have to get out of the vehicle for this one:

A good road atlas or GPS unit is essential for exploring this area, but every time the loggers begin working a new patch, they open new roads, so the cartographers can barely keep up.

A freshly logged area and the new road leading to it:

And a nearby area that was logged in the 1990s and is now having its roads reclaimed by nature: 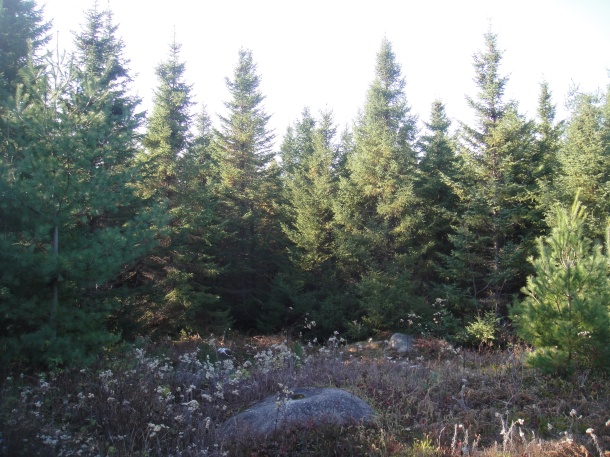 Continuing along the Golden Road: 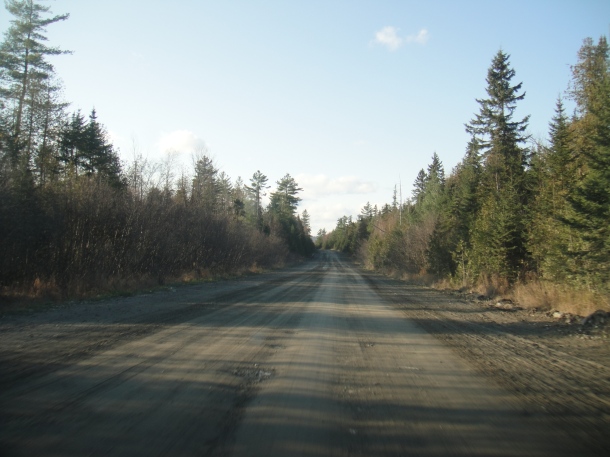 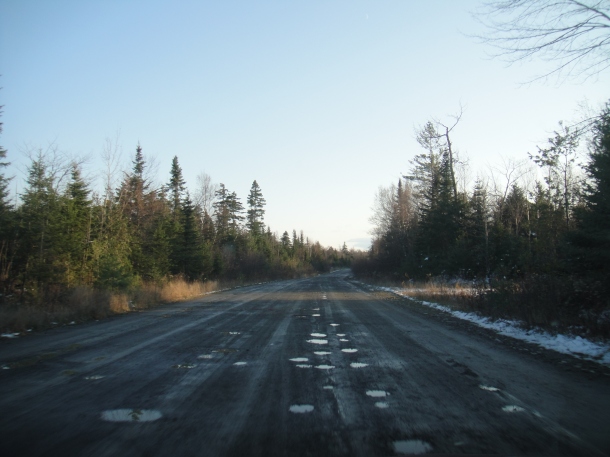 Given that crossing into Canada was not an option, we eventually turned back and took the left fork of The Golden Road toward Kokadjo and Greenville:

So many interesting-looking side roads along the way and yet, tragically, so little time:

The tiny town of Kokadjo:

Leaving The Golden Road at Greenville: 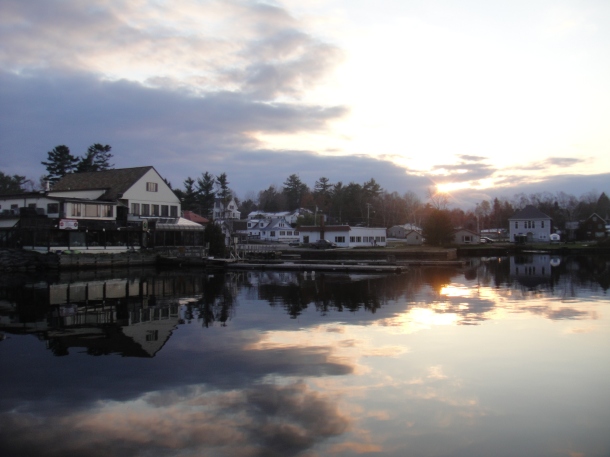 Exploring The Golden Road is a great experience, but please don’t think that preparation is not important if you decide to visit.

Remember that you are entering true wilderness. There are no gas stations, restaurants, lodgings or anything but water, trees and wildlife. Mobile phone service is spotty at best. So, go prepared with a full tank of gasoline, bottles of water, energy bars, insect repellent and a good spare tires(s).

When you are topping up your fuel tank in Millinocket, ask about the current condition of The Golden Road – if there has been a lot of cutting going on along the route or if it has been a while between gradings. The road could be in uncomfortably rough shape. After all, it’s a private road built for trucks and logs, not cars and people.