One significant source of water in the Middle East comes from a karst spring found in the Golan Heights region of Israel. The water from this spring forms the Dan River which is the largest and most important tributary of the Jordan River. It is fed by rain and snow that filters down through the rocks of Mount Hermon and emerges at its foot, creating the largest karst spring (En Dan) in the Middle East.

I wanted to see it.

So, we hiked in and found it.

It may not look that dramatic when compared to a raging waterfall like Feather Falls, but there is a lot of water flowing out of there – 240 million cubic meters a year of it:

This is another view of En Dan, the main spring that feeds the Dan River: 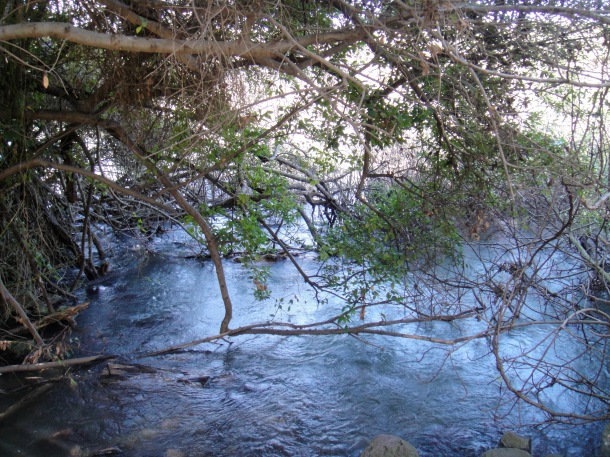 A better sense can be had of just how much water the En Dan spring is pumping out by this view of the Dan River just downstream from the spring pictured above:

The Dan River through some of the trees supported by its pure waters:

Although En Dan is the main spring in this region, and is the primary source of water for the Dan River, there are other smaller springs throughout the area that sustain a number of small streams that flow into the Dan River. These springs and streams sustain an incredible tangle of lush greenery, consisting mostly of laurel, Italian buckthorn, marsh fern and Syrian ash.

Of course, this oasis can seem rather out of place, given the arid conditions in the surrounding countryside: 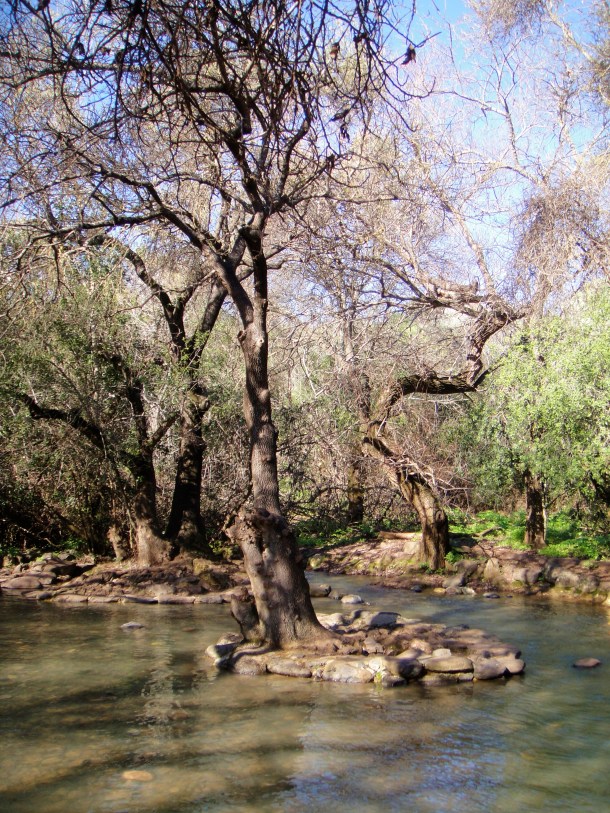 This abundance of water is not something that has just been noticed recently. Human beings have been taking advantage of the water found here for many thousands of years.

Recent evidence of that can be found with the remains of this water-powered flour mill which was still in use up until 1948: 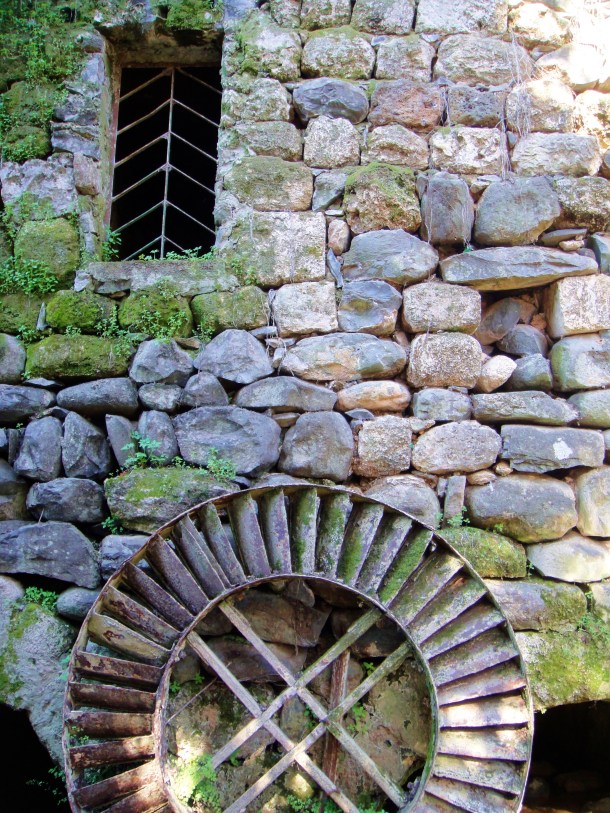 However, also near the springs are the ruins of the biblical city of Dan. Named for the tribe of Dan, which was described in the Book of Judges as the largest of the twelve Israelite tribes, the city of Dan was the northern home of ancient Israel:

This area is believed to have been one of the key rest stops on the historic route from Egypt to Syria. Before Dan acquired the name for which it is now known, it was named Laish or Leshem.

Egyptian documents dating back to the nineteenth century BCE describe the Canaanite city of Laish as a prominent and prosperous trading center. It wasn’t until the eleventh century BCE, some eight hundred years later that Laish was conquered by the Israelites of the Exodus story, and the city’s name was changed to Dan.

The Bible describes the conquest of Dan as follows:

“They proceeded to Laish, a people tranquil and unsuspecting, and put them to the sword and burned down the town. There were none to come to the rescue, for it was distant from Sidon… They rebuilt the town and settled there, and they named the town Dan, after their ancestor Dan who was Israel’s son. Originally, however, the name of the town was Laish.”

Our Italian correspondent perched on the edge of the ruins… These ruins are quite close to the springs and you can see how sparse and dry the landscape is even just a short distance away:

In the background is Ghajar and the Shebaa Farms complex on which I shall have much to say in a future post.

7 thoughts on “Tel Dan, The Dan River And The Largest Karst Spring In The Middle East…”