One will see some cars and other vehicles in Pyongyang. I wouldn’t go so far to say that there is traffic, but one will at least look both ways before crossing a street in the capital city. This contrasts rather strangely with the countryside of North Korea where one can literally drive for hours on their massive highway system and not see a single other motorized vehicle.

Part of the reason for this, of course, is the lack of access to resources that most North Koreans live with. However, this is also due to the very tight restrictions on travel within North Korea. So, for example, even if one of the
(relatively) wealthier inhabitants of Pyongyang had access to an automobile and wished to take a road trip down to Kaesong, it is very unlikely that they would have permission to leave Pyongyang with that vehicle (even travel between different neighborhoods within Pyongyang is restricted).

So, what one will notice is that the few elites in the larger towns and cities will possess automobiles – Pyongyang has the most number of elites and so that is where the most vehicles are – but the highways in between are remarkably lonely.

And as you, my dear readers, can see, these are not primitive back roads, but full-sized, sophisticated highway systems with overpasses…

…and plenty of capacity for traffic:

Should other travelers be encountered on North Korea’s highways, this is what they’ll almost certainly be “driving”:

But, occasionally, one will see the shocking sight of another vehicle:

It’s often difficult to obtain good pictures of North Korea’s highway system. Vast stretches have rows of trees planted alongside them exactly as you can see below… This frustrates the taking of pictures of the landscapes of North Korea, but may also have a more practical purpose such as creating work for people: 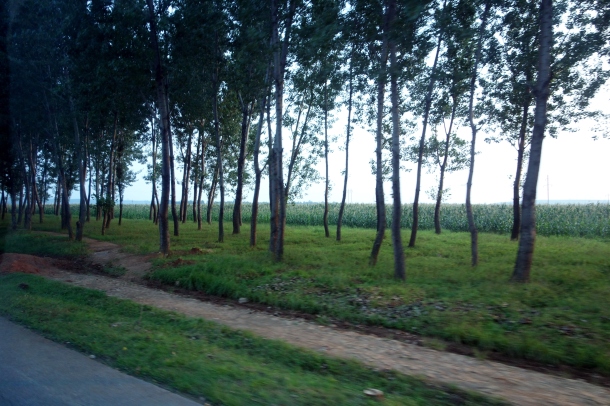 This is a rest stop where we took a break for a few moments on the highway from Pyongyang to Kaesong… Of course, we were the only vehicle there and, in fact, no other vehicles passed by on the highway for the entire duration of our visit. The rest stop was fully staffed and there were some snacks and drinks for sale (along with the usual propaganda items), but the complete loneliness of the place was something to behold:

The view of the deserted highway from the inside of the rest stop… And please believe me when I tell you that this is one of the main transportation arteries between the most populated sections of North Korea: 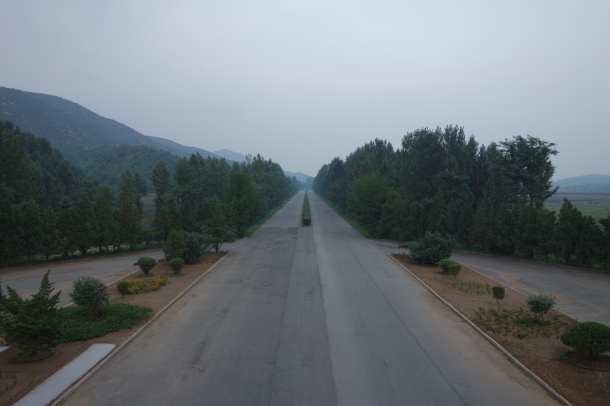 Sections of North Korea’s highways have been widened so that they can be instantly converted into landing strips for military aircraft. It’s difficult to tell from this picture, but we are driving through one of those sections below:

Road maintenance and repair is an interesting affair in North Korea. Although initial construction of the highways no doubt utilized at least some motorized construction vehicles, such luxuries are not available for maintenance. As such, the highways are maintained by hand with primitive tools:

Although in the West, we are used to the orange construction cones, flashing warning lights and flaggers, there are no such safety precautions in North Korea. Given the absence of traffic, they simply aren’t necessary:

In fact, it is not uncommon to see groups of people sitting around having a picnic in the middle of a highway or even napping in the highway.

6 thoughts on “The Lonely Highways Of North Korea”