The unique form of collective living represented by Israel’s kibbutz movement has always been intriguing to me even before I was really sure what life on a kibbutz was all about (I just projected my ideals onto what I thought it could/should be).

I liked the feeling of shared purpose and community – something I believe we are increasingly lacking in Western society. This idea was particularly appealing to me when set in an idealized rural setting… 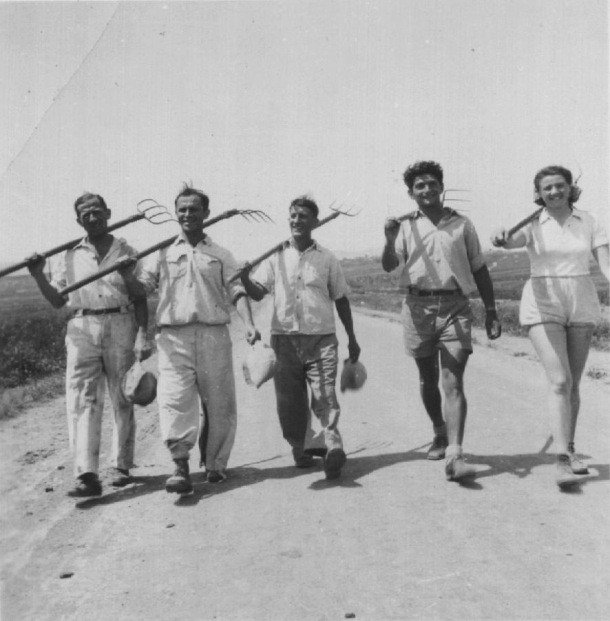 Rather than try to explain the introductory history (and the reality) myself, I’ll yield to the explanation provided by the Kibbutz Program Center website:

Kibbutz means group in Hebrew. It is a modest name for something unique: a voluntary democratic community where people live and work together on a non-competitive basis. Its aim is to generate an economically and socially independent society founded on principles of communal ownership of property, social justice, and equality.

The first kibbutzim (plural of kibbutz) were organized by idealistic young Zionists who came to Palestine in the beginning of the 20th Century. Their dream was not just to settle the land it, but to build a whole new kind of society. Despite many hardships, they succeeded in creating a social system and a way of life which has played a crucial role in the development of the State of Israel both culturally and politically.

The use of the word “communal” is not an exaggeration. In the early days, it was common throughout the kibbutz movement for members to share everything from food to socks and underwear and sometimes even sexual partners.

Today there are about 275 kibbutzim in Israel.

Given my curiosity about the kibbutz lifestyle, I was pleased to stay on a kibbutz during our exploration of the Golan Heights. The kibbutz we stayed on was Kibbutz Inbar and it has the distinction of being the smallest kibbutz in Israel. However, far from its small stature being a negative, it provides for a closer relationship with the members, while still offering a good sense of the kibbutz experience.

A courtyard at the center of the Kibbutz Inbar: 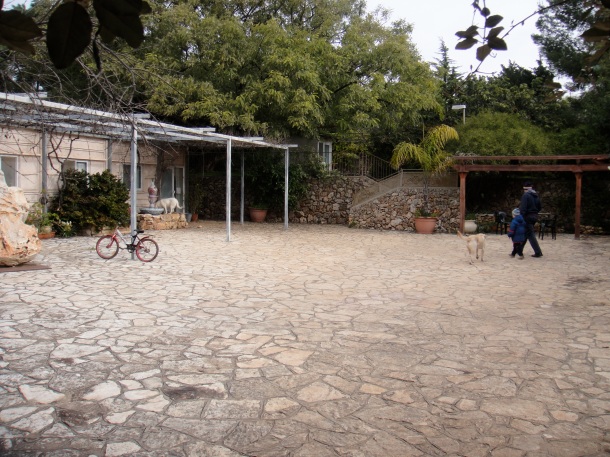 The communal dining room at Kibbutz Inbar… These dining rooms are usually the heart of the kibbutzim:

Breakfast at the kibbutz… Some of this delicious food can be sourced from Kibbutz Inbar itself:

The modest homes and outbuildings of Kibbutz Inbar radiate out from around the central area: 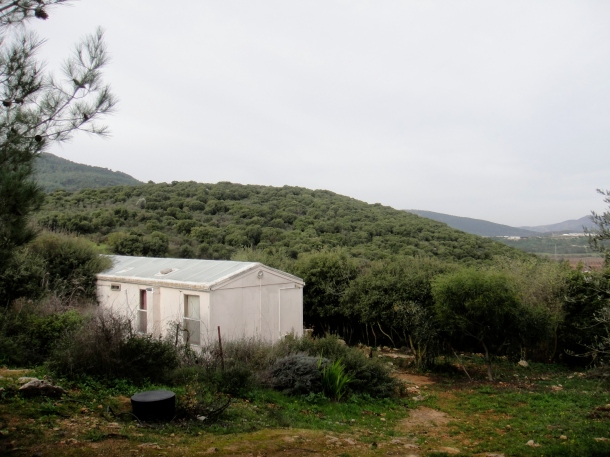 The home for a family on the kibbutz:

An impressive tree near the center of the kibbutz:

There were friendly dogs hanging around too, which is always a plus:

A view of a nearby town – Kfar Hananya – from next to the guesthouse where we stayed at Inbar: 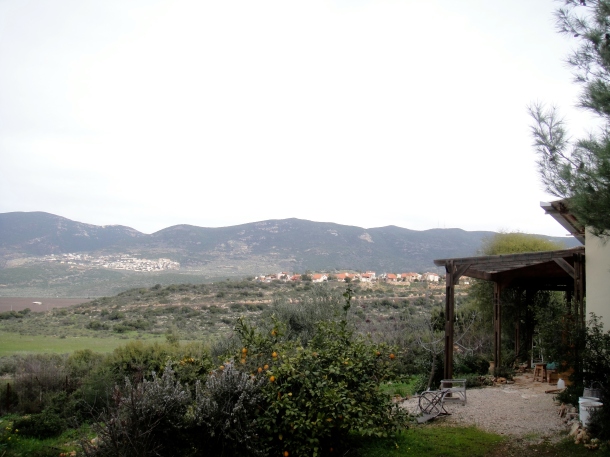 Surrounding the buildings of Kibbutz Inbar are groves of olives… 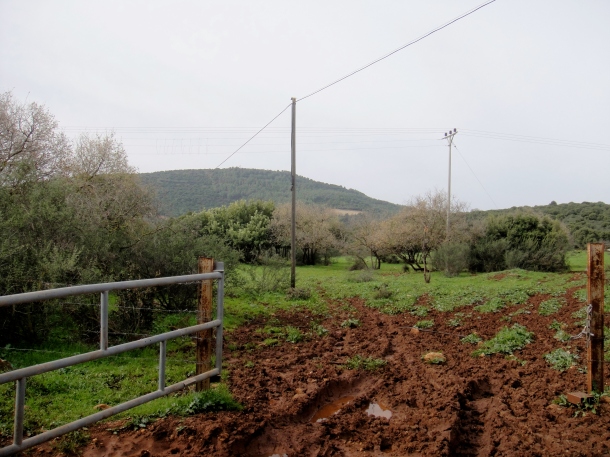 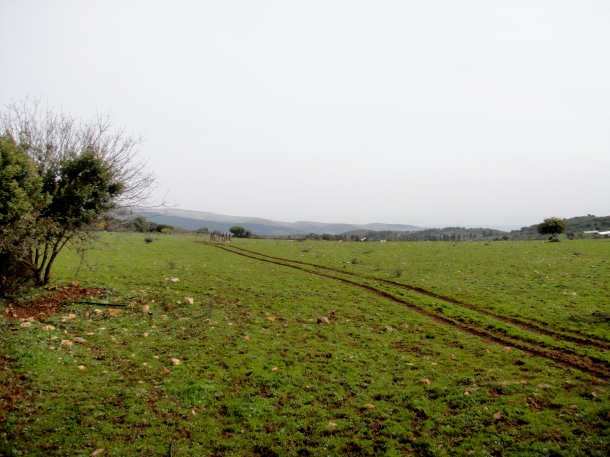 A handsome bull at Inbar:

The road exiting Inbar… The greenery of the Golan Heights is something of a contrast to the Negev, no?

Some have compared the kibbutzim to an excellent country club with the added bonus of a safety net. This “safety net” is a minimum income for all, and if a kibbutz community does not pay for it entirely, subsidized healthcare, education, social needs (daycare, etc.) and care for the elderly is provided.

The mutual help and responsibility for each other – the sense of community – along with the quality of education, environment, space and security sounds appealing, no?

An attractive girl The Velvet Rocket staff encountered later in the trip and who belonged to another kibbutz spoke of the intense loneliness of cities and emphasized the feeling of community in the kibbutz as “priceless”.

Given the above, it may surprise readers to hear that, until recently, the kibbutzim were struggling mightily. History has demonstrated to us that, aside from insects, true communal living does not work on a large scale.

As such, Israel’s kibbutz community has spent the last several decades grinding through declining numbers of members, high debt levels, bankruptcies and privatizations.

This slow unraveling eventually forced most kibbutzim to implement reforms, transforming them into commercially viable enterprises. Examples of these reforms range from large changes such as permitting different incomes within the community, private home ownership and the recruiting of agricultural labor from low-cost countries to small changes such as charging for meals and services. Such changes have not been easy for the early generations of kibbutz pioneers wedded to the socialist-Zionist dream to accept.

However, the reforms have placed the kibbutzim on a more sustainable path and have made life on a kibbutz more attractive to new members. Accordingly, the kibbutzim population today of approximately 143,000 is the highest in history.

More people are now signing up for life on the kibbutzim than leaving – a reversal of the exodus during the crisis years – and the influx of working-age adults and young children is helping to redress the demographic imbalances created by an aging population.

Today kibbutzim are involved in businesses as varied as dairy and fish farms to farms that grow dates, olives, and avocados to water filtration plants to outright ownership of factories that produce everything from perfume to auto parts to military hardware.

There are exceptions to those kibbutzim that have abandoned the socialist model (about a fifth of kibbutzim remain collective communes) and readers may find the exceptions to be counter-intuitive. The holdouts are not aging burnouts clinging to the past, but are actually the most wealthy and successful kibbutzim. The reason is, simply, that they are making so much money that they can afford to take very good care of all of their members.

I would compare the situation to the casinos on Indian reservations in a state like California where all of the members of the tribe receive massive dividend checks in the mail each month as their share of the corporate profits from the casino along with benefits such as free education, healthcare and more.

Of course, this turnaround also generates complaints as older members of the kibbutzim argue that the rapidly rising population of members erodes the sense of community and that new members aren’t instilled with a sense of the shared mission.

It’s impossible to make everyone happy.

Many kibbutzim still welcome foreign volunteers and I would think that joining one for a few months would be an interesting way to make new friends, learn some Hebrew and immerse oneself in the culture.

Volunteers are compensated with food, housing, medical insurance and a small stipend (usually about $100 a month). Kibbutz volunteers must be between the ages of 18 and 32; the minimum volunteer period is two months and the maximum six months. Work lasts eight hours a day, six days a week and usually includes agriculture (picking fruit or mucking out cow shit from barns), tourism (working in the kibbutz hotel) or working in the kibbutz kitchen or laundry room.

Volunteers have access to the facilities on the kibbutz, including the gym and pool. Kibbutzim show movies in the evenings and often have a pub. Tours of the area and activities are sometimes available on days off.

4 thoughts on “Life on a Kibbutz”