Zabid resonates in the minds of some given its history as not just the former capital of Yemen (from the 13th to the 15th century), but also a center of learning (particularly the famous university in Zabid) and culture with more than 230 schools and mosques at its peak around the 14th century. In addition, Zabid was listed by UNESCO in 1993 as a World Heritage Site.

Just as with Balkh in Afghanistan, little remains today to suggest the city’s glorious past, but I found the city quite interesting regardless of its history and designations – probably even more so now that it has been pushed aside by Aden, Sanaa, Taiz and other such commercial and governmental centers.

Descending from the mountains, the temperature increases dramatically as soon as one arrives on Yemen’s western coastal plain. Fueled by the humidity of the nearby ocean, one will soon be sopping in sweat and drained by the heat. And the fierce sun reflects off of everything – particularly the gleaming white buildings and stones in Zabid – triggering a sort of snow blindness unless one has their eyes shielded behind sunglasses. You’ll see what I mean about the blinding light in the pictures below…

When first entering Zabid, it is difficult to miss Zabid Citadel as its high walls dominate the landscape of the town: 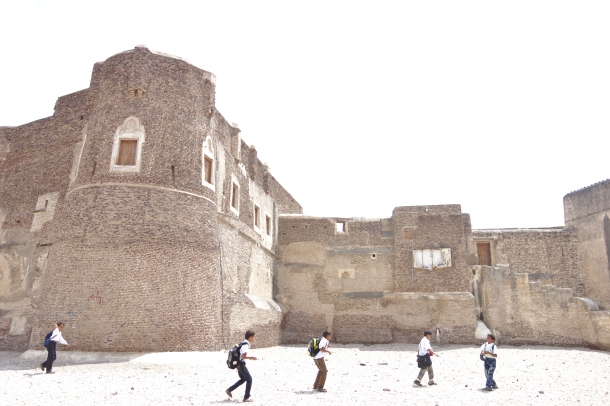 Embedded in the walls of Zabid Citadel is Nasr Palace – an Ottoman-era structure from the early 1800s:

It is fairly easy to get inside Zabid Citadel and it is worth doing so. This is a view of the back side of Nasr Palace that was taken from inside the citadel:

This pit shows the layers of archaeologically interesting material that have accumulated within the citadel over the centuries and gives a sense of how long humans have been active in this part of the world:

One of the far walls of Zabid Citadel:

Near the center of the area inside the citadel… Those are the remains of a well on the left and that is Nasr Palace again on the right:

It is difficult not to crave some shade after even just a few moments of being exposed to the sun in Zabid and as the local Yemenis that are forced out during the day will have the same idea, one can simply follow them toward the center and some shade:

Despite being more used to it, even the Yemenis that have been exposed to the sun for more than a few moments have a somewhat dazed look:

Entering the souq in Zabid… Out of necessity, this area is shaded:

Obviously, there are no street signs or markers (If you are from Zabid, you know where you are and don’t need a sign) and so one just meanders through the souq. Being semi-lost and exploring is part of the fun though. The woman dressed in black has a handful of khat that she is about to try to sell to us:

Some of the locals that we became acquainted with: 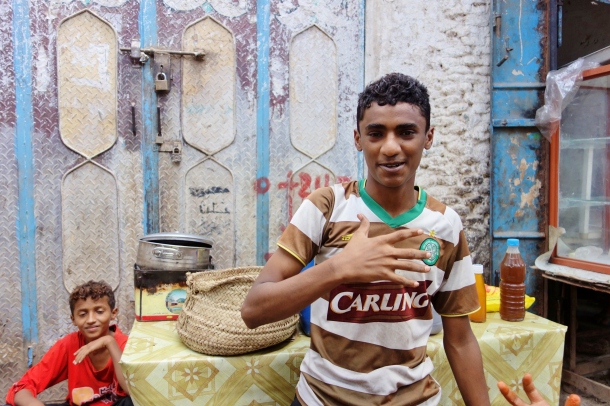 At the center of the souq in Zabid is the al-Asha’ir Mosque which was built in 629 while Mohammed was still alive. Given that is is almost 1500 years old, yes, it does have a bit of a lean to it: 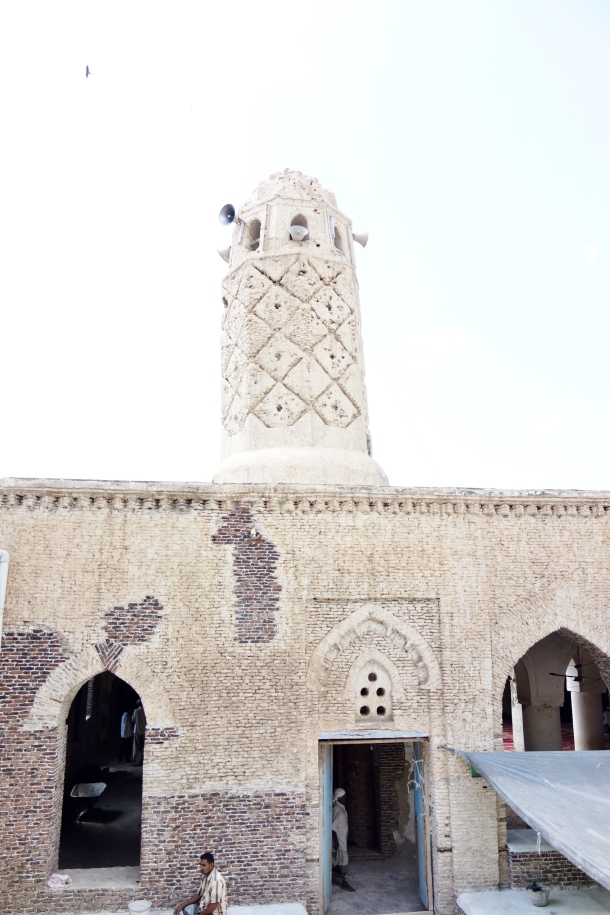 Some of the life at the center of Zabid:

In areas that are exposed to the sun, there is hardly any activity during the day:

She was shy, but very curious about us… Our fixer spoke to her briefly and discovered that we were the first Westerners that she had ever seen:

After winding our way through many more back streets and alleyways, we finally looped back around to where we started. I don’t know how the women bear wearing those outfits in the crushing heat. Some of the women we spoke with mentioned becoming cranky and irritable when wearing those outfits in this environment, but that seems understated to me as I am surprised they are not an impediment to their survival:

Back to the Toyota to push on… As with most places in the Middle East, Africa, Central Asia or South America, a Toyota 4WD is the vehicle of choice in Yemen too. And, in fact, if one is to venture anywhere even remotely sporty in Yemen and one is not in possession of a Toyota 4WD, such as a Hilux or a Land Cruiser, I would anticipate being viewed with a mix of concern, pity and suspicion.