Article And Photos By Bernie Debusmann

For most people who have visited or live in the UAE, it’s hard to imagine what the country was like in the days before the world’s tallest building, seven-star hotels, overly-air conditioned shopping malls and an indoor ski slope. The few “old” structures in Dubai or Abu Dhabi, for one, have mostly been rebuilt for tourism purposes, and the nomadic Bedouin didn’t leave much behind for us to visit. But, if one heads out of the main cities and into the other Emirates, there are still remnants of a time gone by.

To find some signs of what life was like before the UAE struck it rich with oil, I recently took a trip to explore the northern Emirate of Ras Al Khaimah. Although little known in the West, Ras Al Khaimah – or “RAK” as it is popularly known among expats – has a long history. In the 1400s, RAK, then known as Julfar, was a major trading hub and the hometown of the fictional Sinbad the Sailor.

Later on, the Al Qasimi dynasty (which is still the Emirate’s ruling family) became a significant maritime force in the Gulf, and were accused by the British of conducting maritime piracy – a charge that to this day stirs up considerable controversy among local historians. The Royal Navy – not wanting Britannia’s rule of the waves to be contested – attacked and destroyed the Al Qasimi fleet in 1819.

For much of its history, the principal economic activity of RAK’s coastal inhabitants – like that of most seaside communities in the UAE – was pearling, a difficult, dangerous yet profitable job. Among the main pearling villages in RAK was Jazirat al Hamra, a once-bustling coastal community near Ras Al Khaimah town. The village, which was once home to several thousand inhabitants, was abandoned in 1968, having faced a slow decline since the invention of cultured pearls. It remains standing – mostly untouched – since its residents packed up and left for greener pastures in Abu Dhabi.

The site – which lies not far from the Waldorf RAK and a number of other high-end hotels – can still be visited, and provides a fascinating glimpse into the past lives of what are locally known as Hadhr – coastal Bedouin.

The town, for the most part, is eerily quiet, which lends a creepy feel to it. The only people I saw were a few laborers (clearly surprised to see a strange ferangi walking around in 50 C heat) working to restore a large, fort-like building on the furthest inland outskirt of the town.

The bulk of the town seems to have been comprised of small, single family homes, mostly built around an inner courtyard. Interestingly, although in ruins, the homes are still owned by the families that once inhabited them. Many members of the main local tribe – the Al Zaab – have gone on to have distinguished careers in the UAE Foreign Ministry, including ambassadorships to Kuwait, Germany, Yemen, Mexico, Tunisia and Algeria.

At present, the town’s only “inhabitants” seem to be a pack of nervous, jumpy goats who dart in and out of buildings. It’s unclear to me who feeds them, but I noticed that several of the houses had goat feed inside. 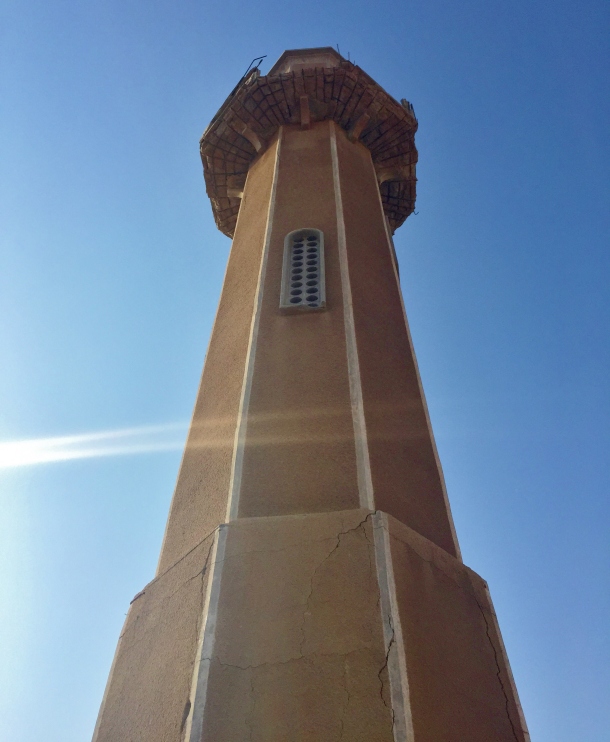 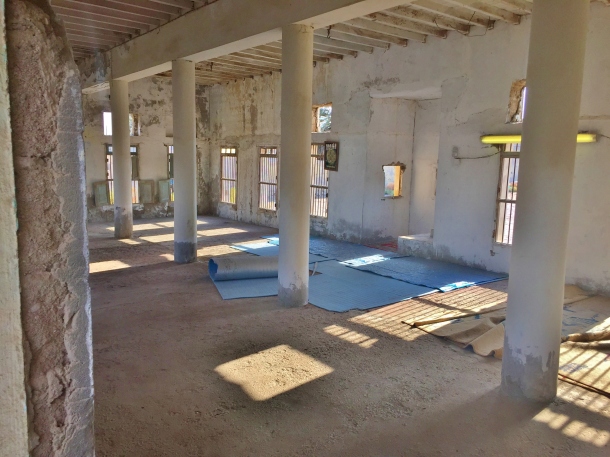 Notably, several of the small local mosques seem to still be in use, with foam mats spread on the floor. I suppose this is for the laborers to use, or perhaps for Emiratis visiting their ancestral homes.

While most of the buildings were probably residential, several locations can be identified. This building – which has a sign which reads, roughly, “Abu Sultan’s Shop” – was probably the equivalent of a corner bodega for residents. 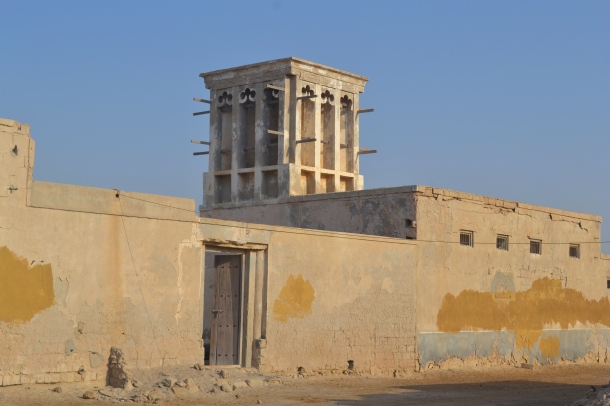 Another, much larger house, built of coral rock in the traditional Emirati style, was apparently the home of a well-off local salesman who sold wares brought in from other parts of the Emirates or from nearby Iran. The tower is a “windcatcher” used to cool the home, which is a common feature of homes in the Arabian Gulf.

This area, which sits on one side of what must have been the main road through the town, must have also been a row of shops or market stalls.

An abandoned Land Rover also sits nearby. In the background one can see a poster celebrating the UAE’s 43rd National Day celebrations that took place in December 2014, which last year happened to coincide with one of the yearly reunions former residents have.

Among the more notable buildings in Jazirat Al Hamra was this small, traditional-style mosque with a small minaret. According to local media reports I found, the mosque was built at the request of a local woman who married a Saudi prince in the 1960’s. 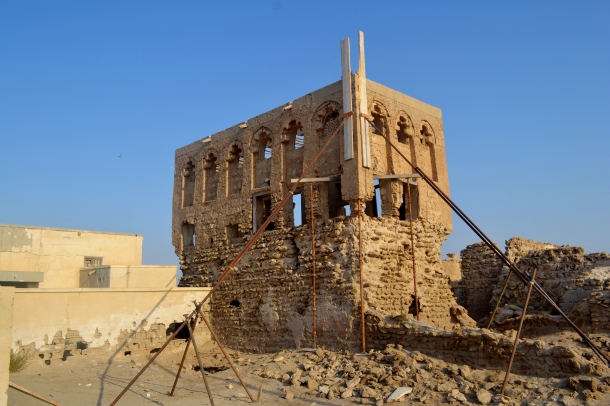 Probably the most impressive structure – which is certainly the biggest in the entire village – is this two-story house, with tall windows overlooking the sea. The home apparently belonged to a local pearl merchant. Clearly, he did quite well for himself.

Overall, Jazirat Al Hamra is well worth a visit for those interested in the pre-oil lifestyles of Emiratis, before the glitz and glam that characterizes much of the country today. It’s probably one of the few, and best-preserved such sites in the entire UAE. Despite what people think, the UAE is rich in history and heritage sites. It just takes a bit of effort to find them. Stay tuned for more.