As we were driving up I-80, it was fun to speculate who was headed to Burning Man based on the type of vehicle a group was driving and the type of gear they were carrying. Once we turned on to Route 447, drove through the town of Nixon and started driving past Pyramid Lake and the Nightingale Mountains, this caravan developed. Everyone now going north was going to Burning Man and “Black Rock City”. 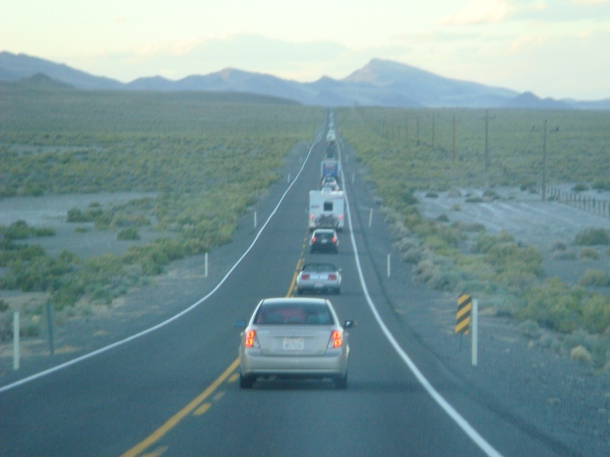 Just as it started to get dark, we were stopped about eight miles from the entrance along with everybody else in this line. The reason, as it turned out, was that a massive windstorm was sweeping across “Black Rock City” (temporarily the third largest city in Nevada) generating whiteout conditions.

No problem. We had plenty of beer, plenty of time and good company in the form of other Burning Man attendees. Ian and I soon became chummy with the group behind us and this chumminess soon generated outsize returns for us. The dynamic in the car behind us consisted of a guy named Brandon and his chick Jael as well as a girl named Sara Rose and a really cool guy named Hans. As an interesting “oh by the way”, Jael was a finalist on the TV show America’s Next Top Model a season or two back (I don’t watch the show) and was a complete cokehead shitshow. This was a good thing though because Hans and Sara Rose couldn’t wait to get away from her after having driven up from Los Angeles in the car with her.

As luck would have it, Jael lost her ticket in the windstorm as we were driving in (which I can’t fault her for because mine blew out the window and I had to go scampering across the desert after it) and so Jael and Brandon had to stop and spend several hours at the entrance sorting things out. As we had a truck, Hans and Sara Rose (and by now Hans’ roommate Roxy who had joined us) immediately pressed the truck into service by saying that if we would rescue them from that situation, that they’d take us to a great campsite and a cool crew. Jackpot. Ian and I didn’t know shit about how things worked and so were more than happy to be mentored by Hans.

After ringing the bell on the way in to mark the loss of our Burning Man virginity, we ended up at the Hot Love Brigade – a camp of people from Los Angeles and Australia that Hans knew. 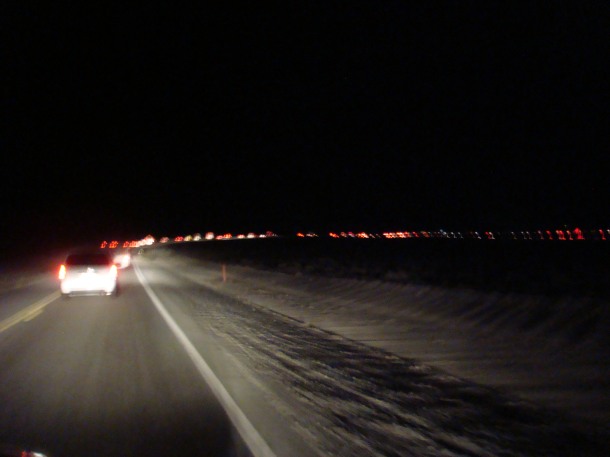 We started setting up our monkey hut and tents behind the main Hot Love Brigade site and at around what I thought was 2:00 in the morning or so, I looked up to see the sun was rising. That was a long night.

Here’s Ian hanging out in our monkey hut the next morning. The monkey hut was absolutely fantastic by the way and I would highly recommend it to anyone not headed to Burning Man in an RV (and an RV is not really in the spirit of Burning Man, is it?) The monkey hut provides you with the all-important place to hang out in the shade during the day and recuperate from the late night before out on the playa. Sleep and relax during the heat of the day – go out at night when it cools down to tolerable temperatures. 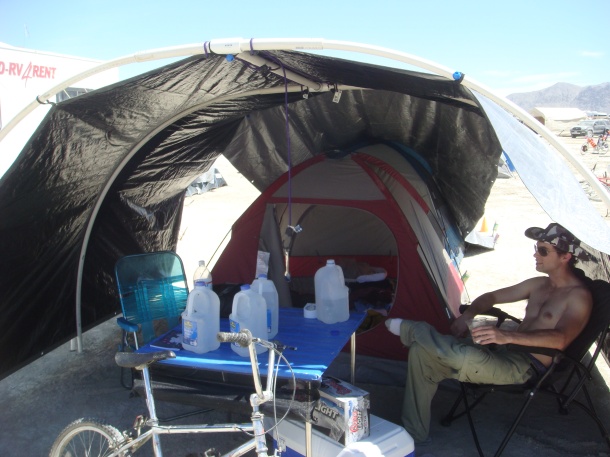 A view from the front of the monkey hut on the first morning. 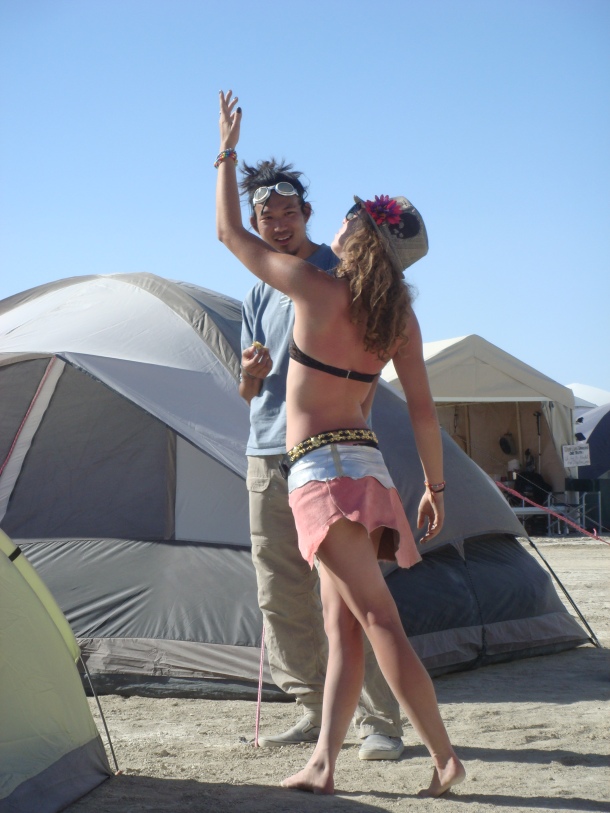 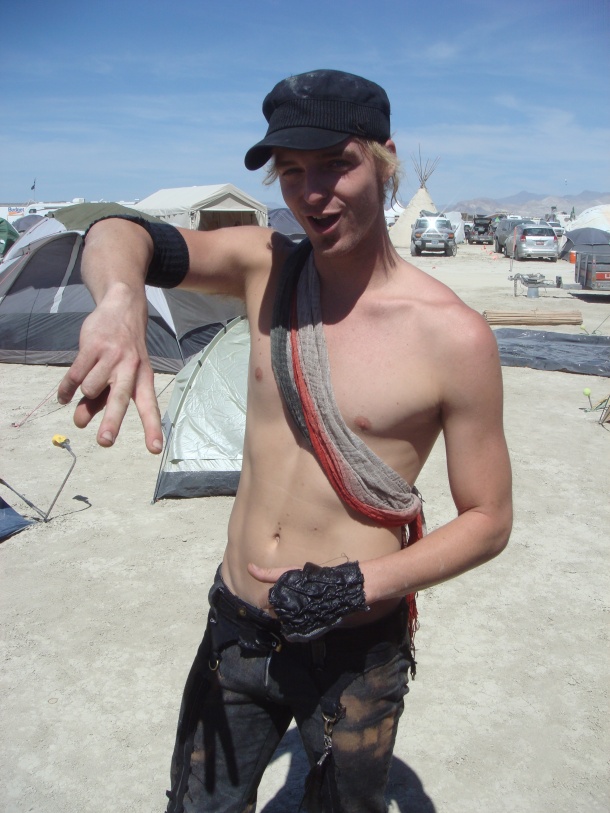 Hans with me in one of my costumes. My hat and the vest got a lot of positive feedback. 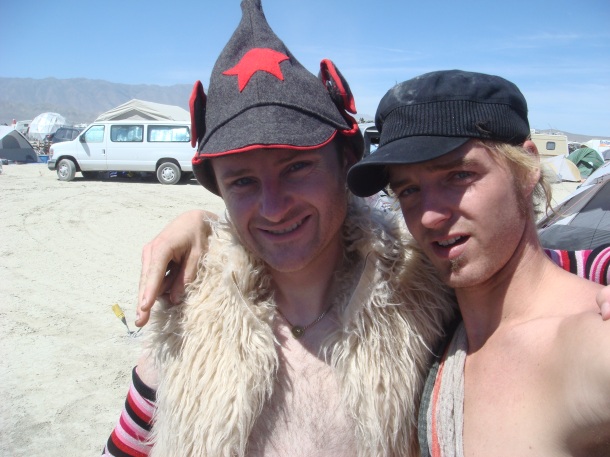 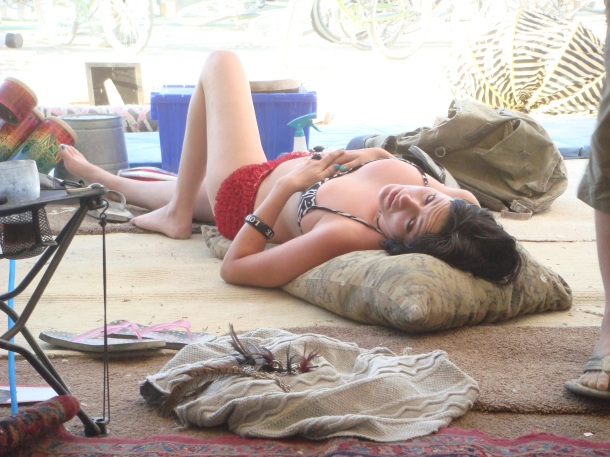 The center of the Hot Love Brigade camp.

Karim. One of the core Hot Love Brigade members. Originally from the Bay Area and now an aspiring DJ in Los Angeles, he told me a great story about a growing operation he maintained in the Bay Area that netted $50,000 to $60,000 every couple of months. 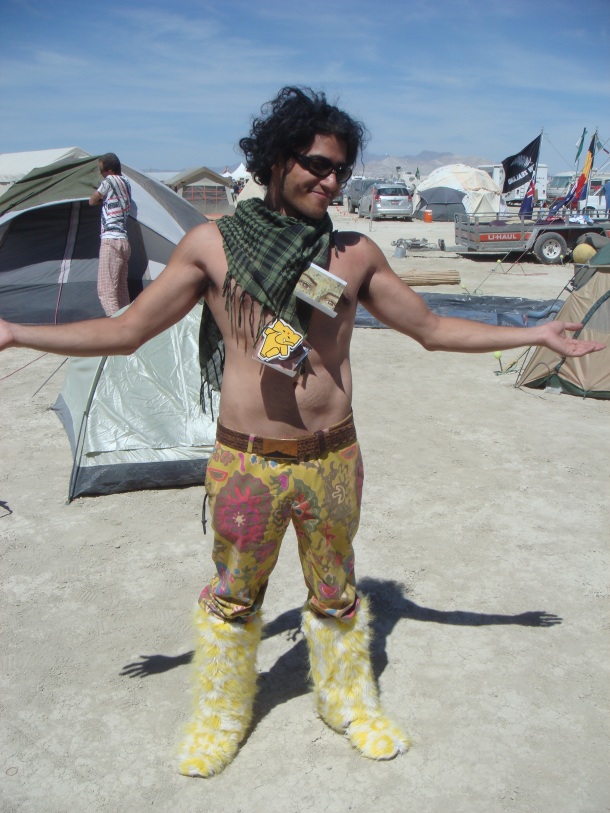 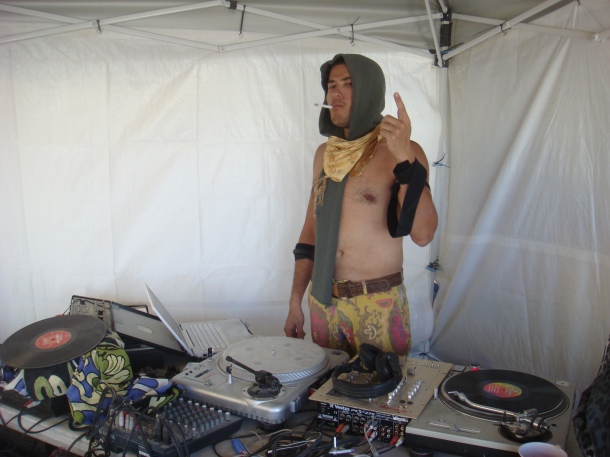 Hanging out around the camp.

Hans having a go with the drums (I told you the camp was well equipped). 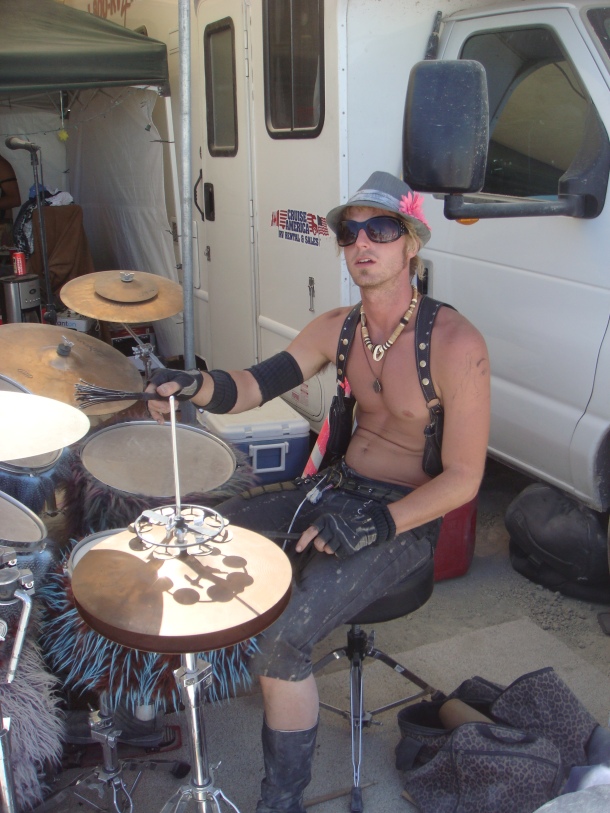 A Hot Love Brigade girl. She’s pretty. And she’ll paint a pretty picture of excess in a later post. 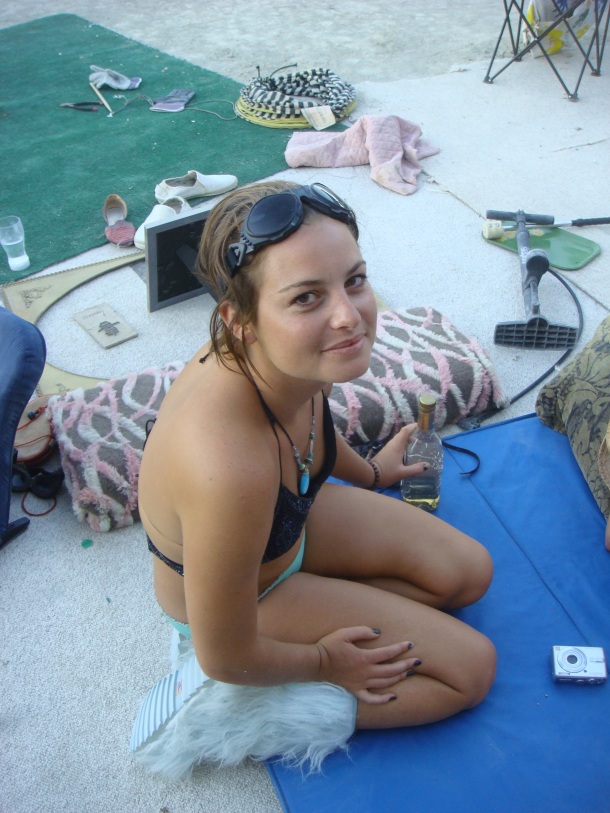 The Petting Zoo – A free bar a short distance away from our camp. Yeah, free, as in you go up and order any drink you want and don’t pay for it. 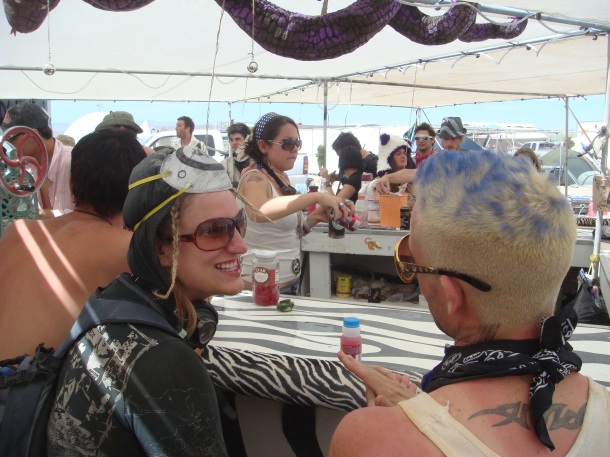 Some of the art cars and mutant vehicles near our camp. 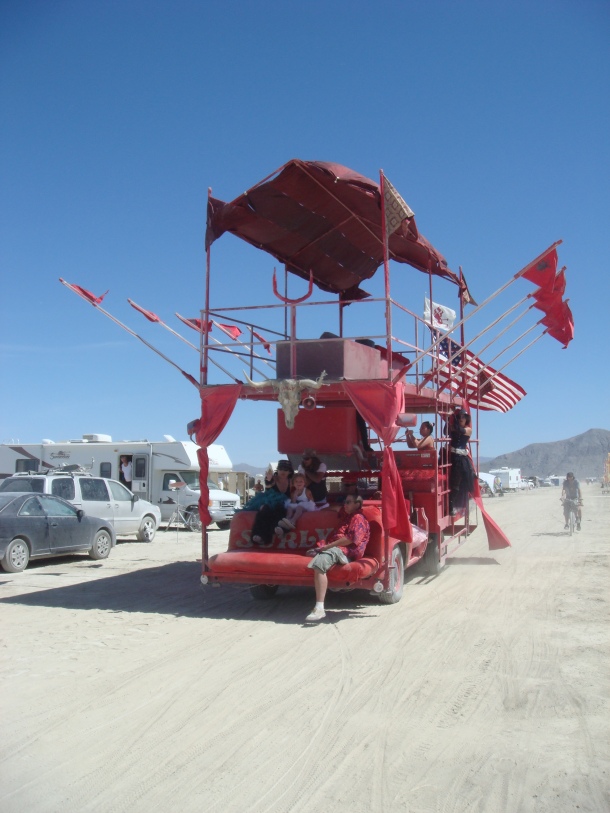 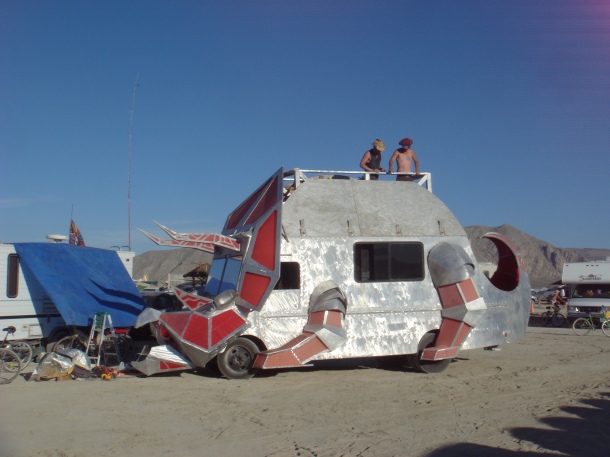 As soon as it got cool enough, Ian and I rode our bikes out to the center of “Black Rock City” to check out some of the artwork and the the famous “Man” himself. 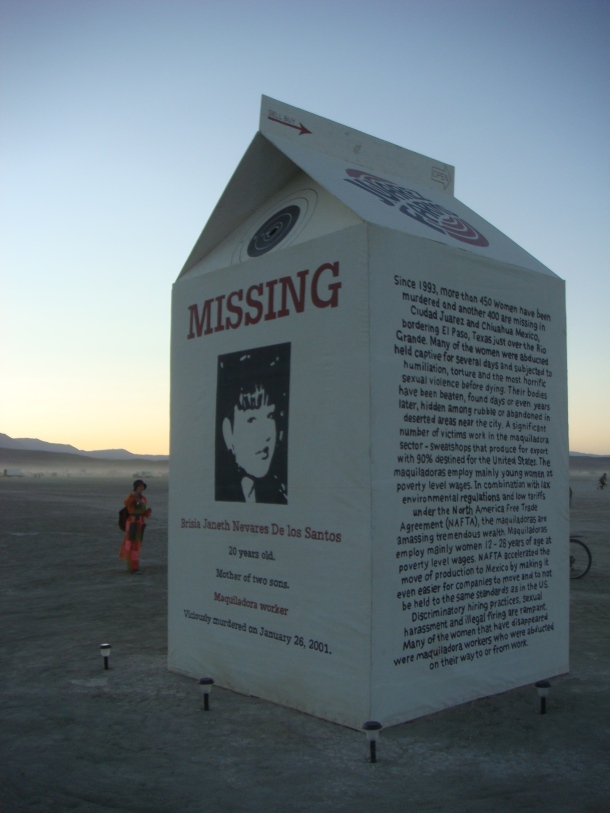 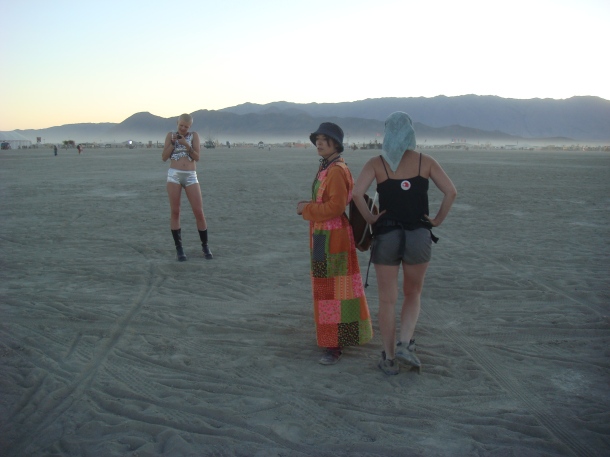 I have no idea who this guy is, but he really wanted to be in my picture. All roads lead to… 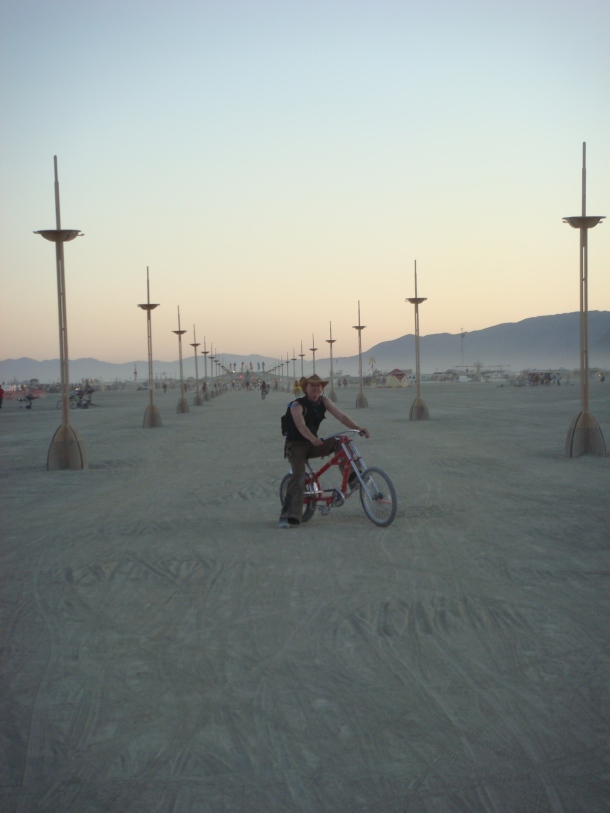 This. The “Man” in Burning Man. 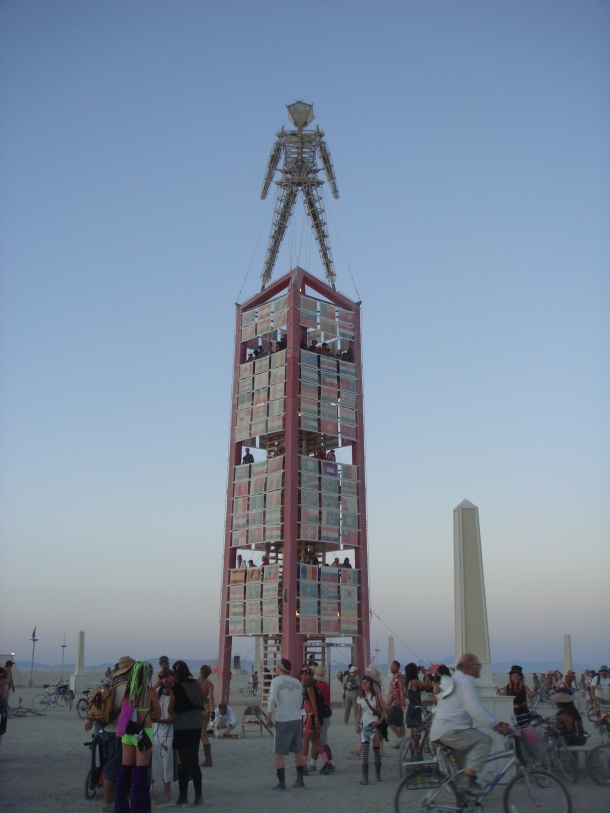 You can climb up in the tower and the views are quite good. This is the view out toward Black Rock City. 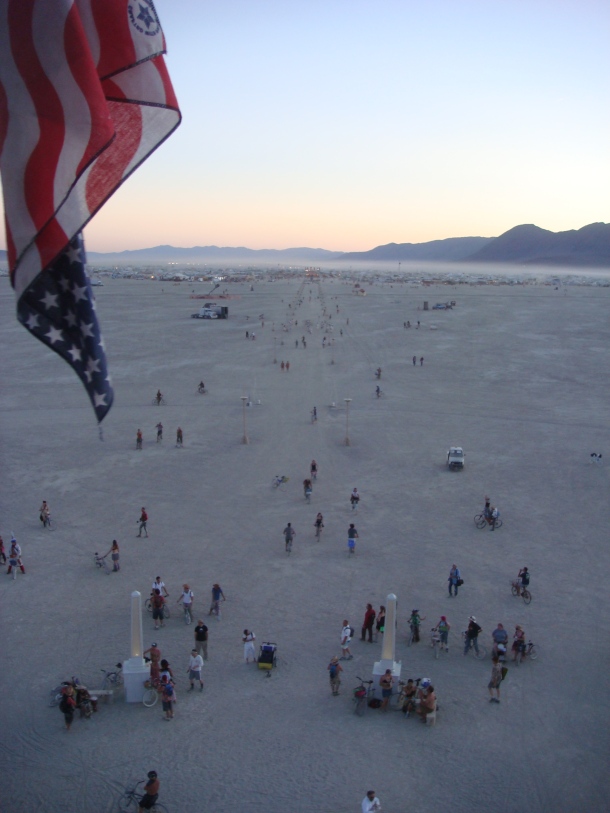 Plenty of weird people are always hanging out around the man. 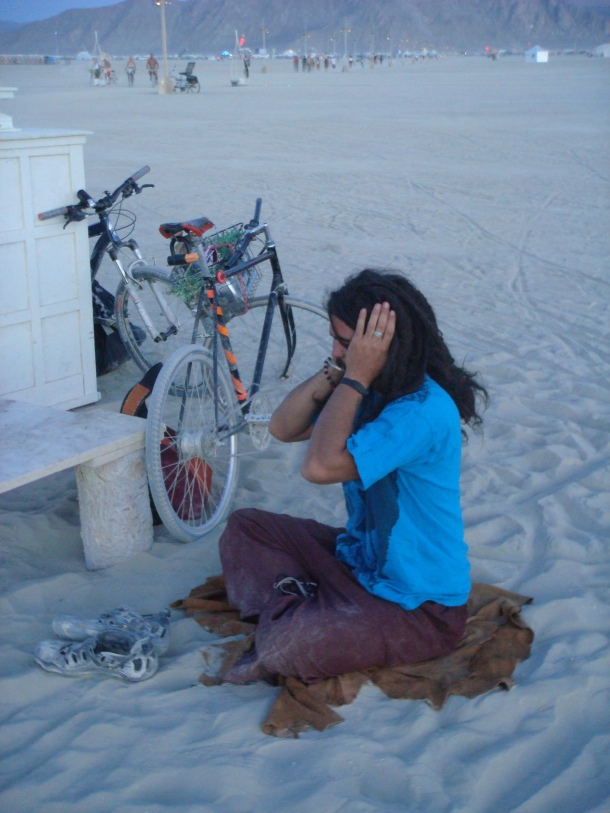 Hanging the lanterns as night falls. 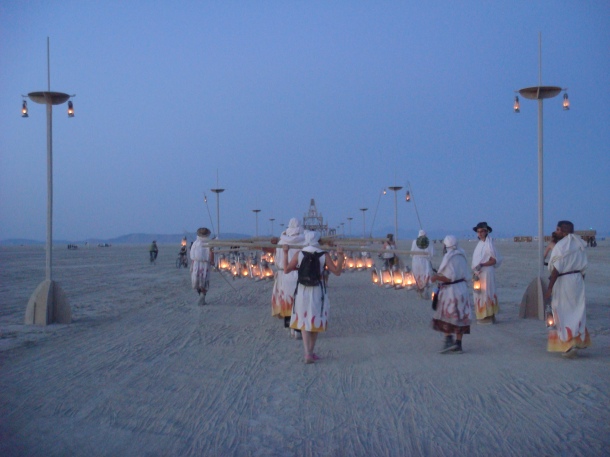 “The Temple” while still under construction. It is burned the night after the Man is burned. 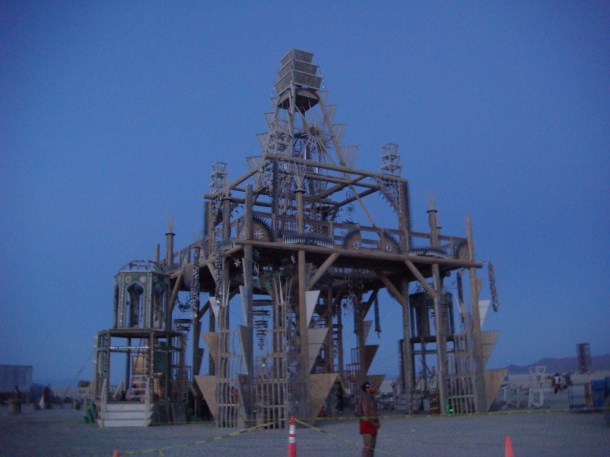 Some more artwork out on the playa. Here we have the “Bummer”. 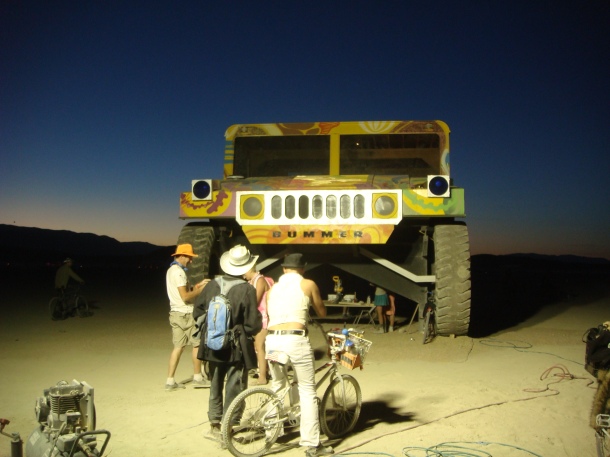 I thought this setup was really cool. The orbs would glow in synchronization with electronic music playing in the background. 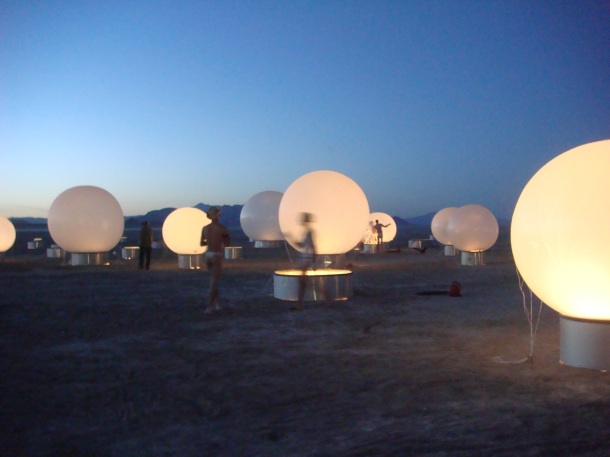