The small mountain of Jebel Barkal (also known as Gebel Barkal) and the area around it was the capital and spiritual center of the ancient black kingdoms of the Nile for nearly a millennium.

Around 1450 BC, the Egyptian Pharaoh Thutmose III extended his empire to the region and considered Jebel Barkal its southern limit. Pharaoh Ramses II constructed a temple to the Theban god Amun at Jebel Barkal in the 13th century B.C. as he believed that the spirit of Amun resided in the mountain.

The 25th Dynasty Nubian king Piye later greatly enlarged the New Kingdom Temple of Amun (which is even today still considered sacred by the local population).  Jebel Barkal remained the capital of the Nubian kingdom until it was moved to Meroe around 300 B.C.

The ruins around Jebel Barkal include at least 13 temples and 3 palaces and together with the mountain and the historical city of Napata were designated by UNESCO in 2003 as World Heritage Sites.

The mountain was also supposedly used as a landmark by traders on the important route between central Africa, Arabia, and Egypt, as the point where it was easier to cross the Nile River.

The mountain of Jebel Barkal in the distance:

Among the ruins found scattered around Jebel Barkal are a set of pyramids…  I took the opening picture of Jebel Barkal after climbing to the top of this pyramid below: 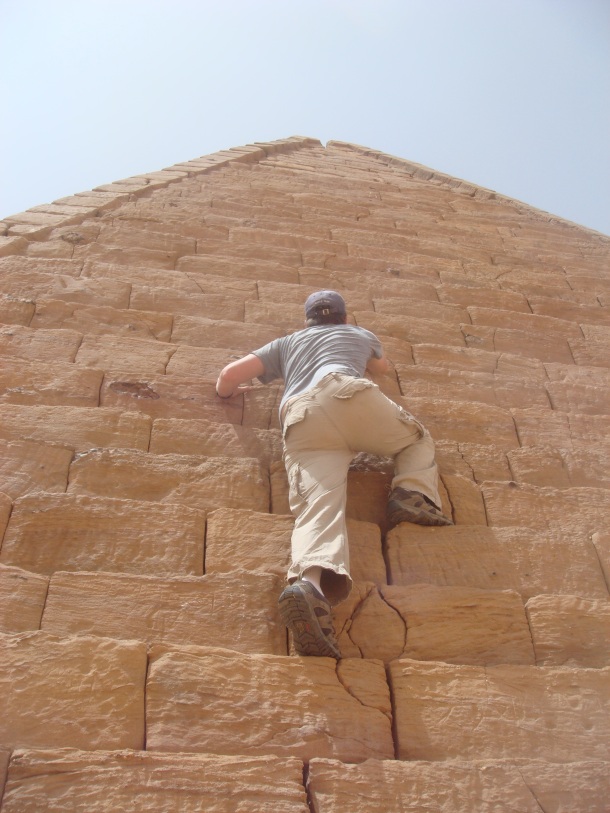 A view down to the ground from near the top of the pyramid:

These are the grounds of one of the temples at the base of the mountain:

I’ve shown you temples in Sudan focused on elephants, rams and lions so far. Despite Amun’s association with the ram, this particular Temple of Amun had a heavy emphasis on cobras:

Below, the edge of the mountain is said to resemble the head of a cobra reared up to strike… I think that’s a stretch, but maybe it looked more convincing in the past: 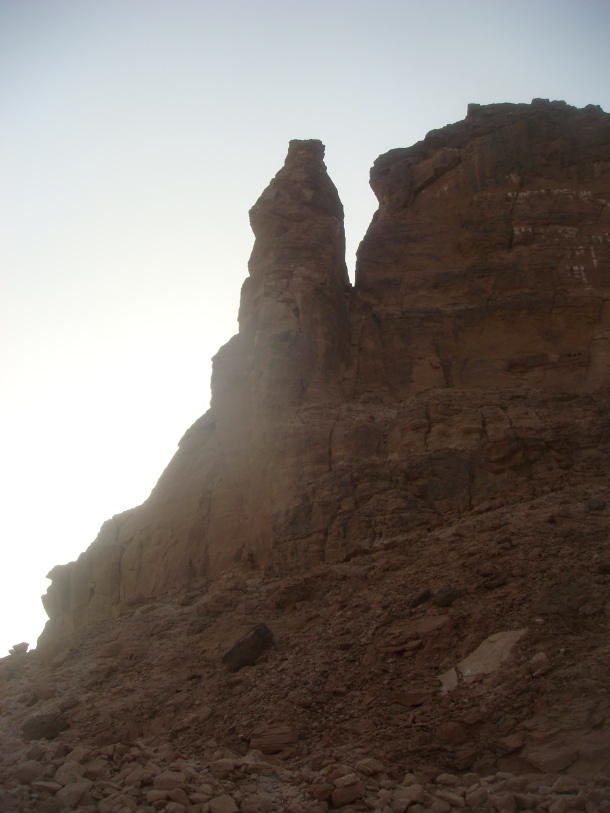 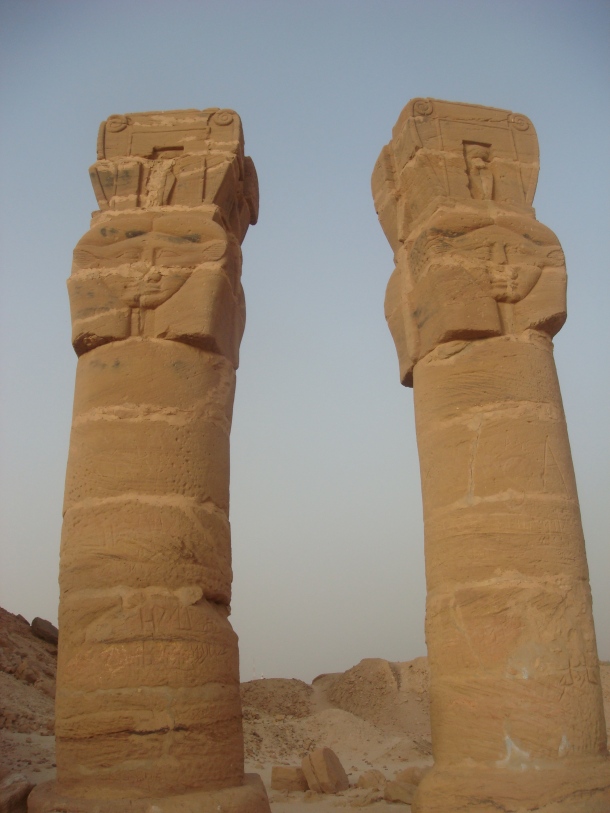 Here is a closeup on the cobra pillars so you can see some of the cobras etched into them:

There was a section of the temple set into the mountain that was quite interesting, but it was too dark to take pictures inside.

This is one of the paramilitary policemen that was at the site: 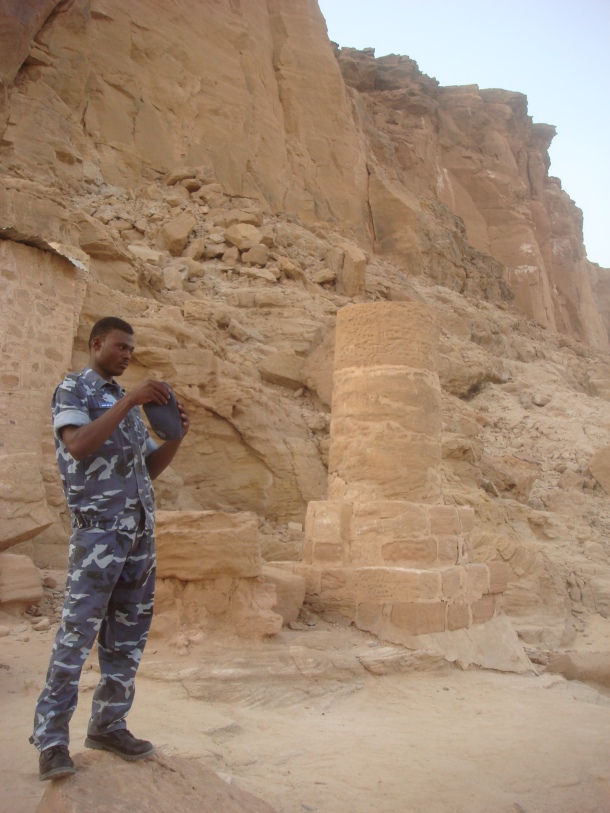 I didn’t think much about him after taking those two pictures, however, he was to make a memorable re-appearance later.

I had walked around the side of the mountain past the temple when a man, noting that I was obviously a Westerner, approached me and said “hello” in unaccented English. It turned out that he was an engineer from the south and spoke English quite well given the nature of his profession. We exchanged the normal questions such as where we were from, what we were doing here, etc. and the man was starting to tell me that he appreciated me being here because they received so few tourists in Sudan when we were interrupted by shouting in the distance.

The policeman I photographed above was coming around the side of the mountain and was screaming at the man I was talking to.

“Oh man, these guys are crazy,” he said to me quietly as the policeman and one of his colleagues approached us.

Upon arriving at our position, the policeman from the above photographs got right up in the engineer’s face and began an intense round of questioning. I have no idea what was said, but it was obvious that questions were being asked. The engineer adopted submissive body language and looked at the ground as he was responding, but this was apparently not sufficient.

My policeman suddenly grabbed the engineer around the neck and threw him to the ground before proceeding to kick him bloody with his heavy combat boots.

For one of the few times in my life, I was too surprised to take a picture. The policeman then turned around and waved me away. Your editor thought it was prudent to move on.

Now, I have no idea what any of that was about. I don’t know if the engineer got in trouble for interacting with a Westerner, however, that never seemed to be a problem before and other people in the area talked to me. I mentioned before that we had some trouble with overly aggressive police in Khartoum and at the Temple of Soleb, so perhaps this was simply a continuation of that trend. Or perhaps the guy was actually a known thief and the cop was doing me a favor.

I just don’t know, but as with most things, the truth is likely more pedestrian. The “engineer” perhaps tries to sell his services as a guide in the area to tourists and hadn’t paid the appropriate bribe to the police forces in Jebel Barkal.

Anyway, getting to the top of the mountain is fairly simple if you go up the right side which happens to be the sandy side – otherwise it is sheer cliffs.

Getting up is quite a workout, but getting down is so much fun that it makes it more than worth it. Coming down, the sand is so steep that when you break into a run, you can cover enormous distances with each stride. I’m doing a poor job describing it, but it is a awesome feeling:

Arriving at the top of the mountain:

Again, noting my status as a Westerner, I was approached by an English-speaking individual. In this case, it was the gentleman pictured below who turned out to be a biologist.

He was pumped up by the fact that he had just paid the equivalent of about $50 U.S. for a strip of land 1000 meters long next to the surrounding town of Karima.

For perspective on this, our driver/guide Ramadan had earlier told us that a strip of private farmland along the Nile in a standard size of about 400 meters would sell for around 2,500 Sudanese pounds which is roughly equivalent to $1,000 U.S. 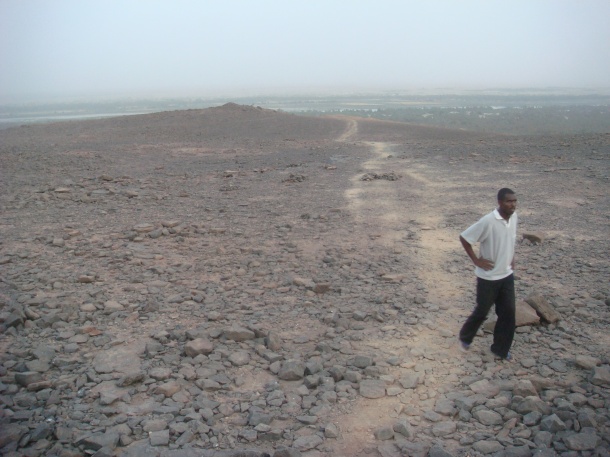 Of course the views from the top of the mountain are excellent.

Below, you can see the sun setting over the pyramids visited in the first part of this post:

And this is what the Temple of Amun looks like from above… The remaining columns and the layout of the ruins suggest that an avenue might have extended all the way to a pier on the Nile: 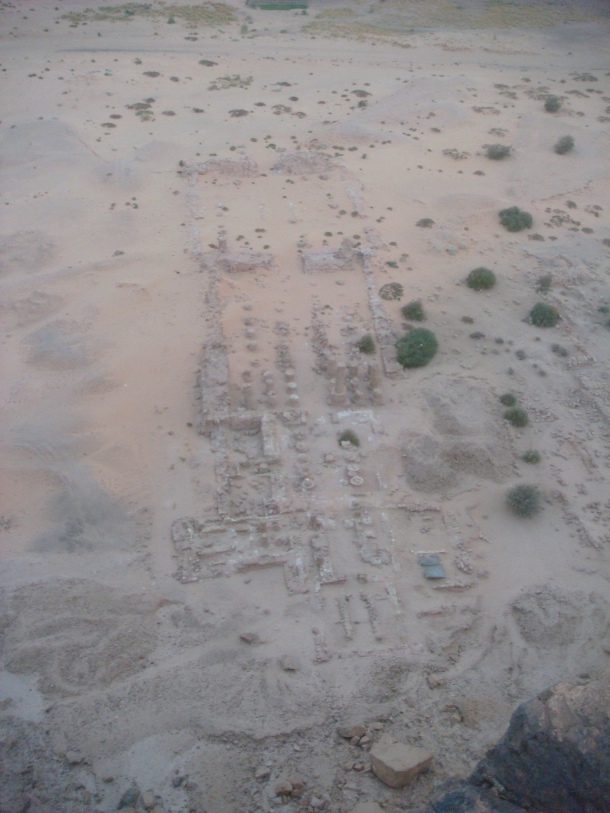 Here’s my obligatory ego shot with the Nile River in the background: 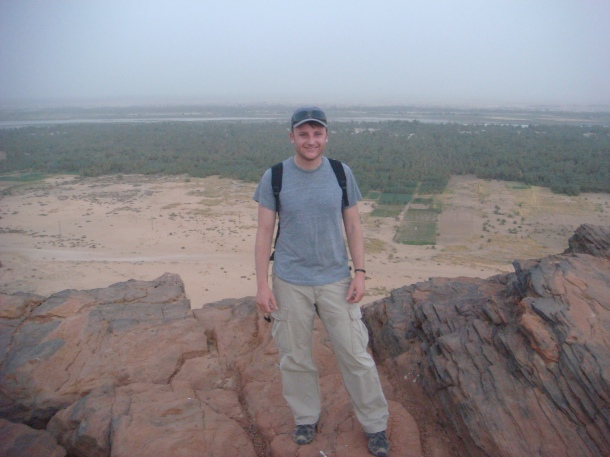 And a good view out over Karima:

The pillar this guy is sitting on marks the highest point on the mountain: 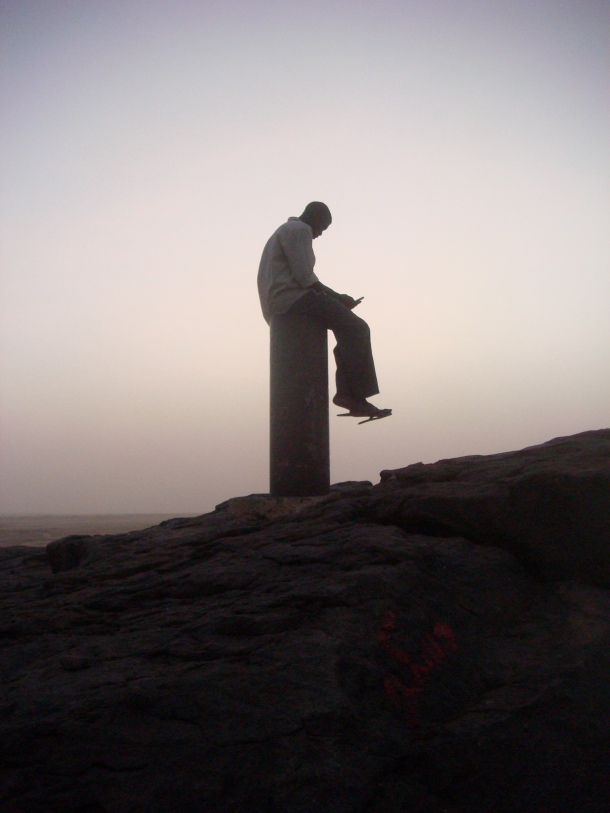 3 thoughts on “Jebel Barkal and The Cobra Temple of Sudan”