Here’s how they explained their decision:

Bogota is tough. Drug barons and guerrillas infest the place like flies and brutal violence occurs daily. Around 23 people are murdered each day, and the leading cause of death for citizens aged between ten and 60 is violence. This gives Bogota the highest murder rate per capita of anywhere in the world.

Naturally, a place like this would appeal to me, but as with Caracas, the hype outpaces the reality. La Candelaria, the cobbled historic center is quite lovely and features a number of quality museums such as the Museo Botero, the Museo Militar, the Museo del Oro and the Museo Historico Policia.

If you’re not into museums and cobbled historic centers, Bogota has a lot of emeralds as well. In fact, aside from cocaine, coffee and FARC guerrillas, Colombia is also famous for its emeralds and produces the largest percentage of the world’s emeralds (followed by Zambia and Brazil) with some estimates indicating that the mines of Colombia may contain up to 90% of the world’s emerald deposits (primarily in the Boyaca region).

The emerald industry of Colombia is now trying to rehabilitate its image following the ‘wild west’ days dominated by organized crime (the emerald war between 1984 and 1990 left 3,500 people dead) and child labor for which it became known.

By the way, if you are looking for emeralds, I strongly recommend visiting Luis Daniel Barragan Pena inside the Edificio Emerald Trade Center. His phone number is 315-325-6291.

Colombia is one of the most developed countries of South America and Bogota certainly reflects that as you should be able to see below.

Fun Fact: Despite popular belief, at least amongst Americans, the letter “u” does not appear anywhere in the name “Colombia.”

One of the first things one will notice upon arriving in Bogota are the soldiers and policemen. They are everywhere: 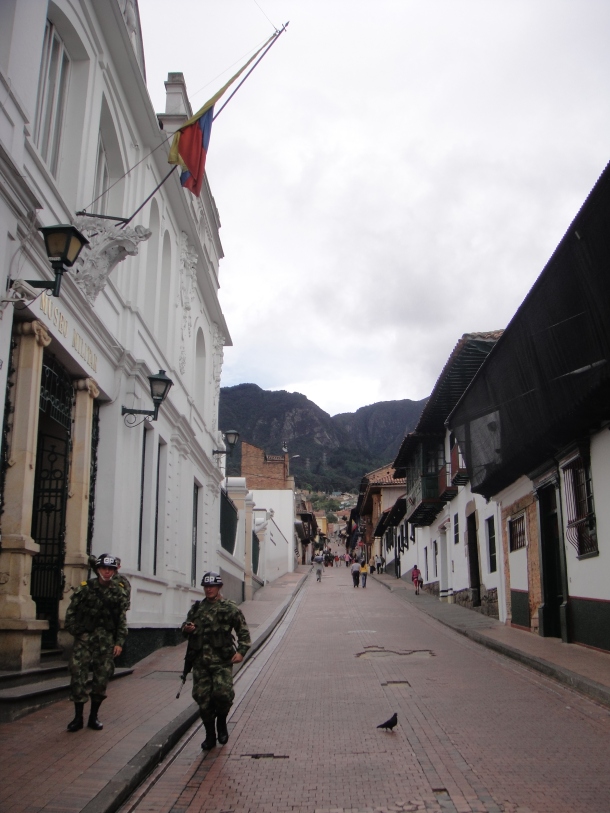 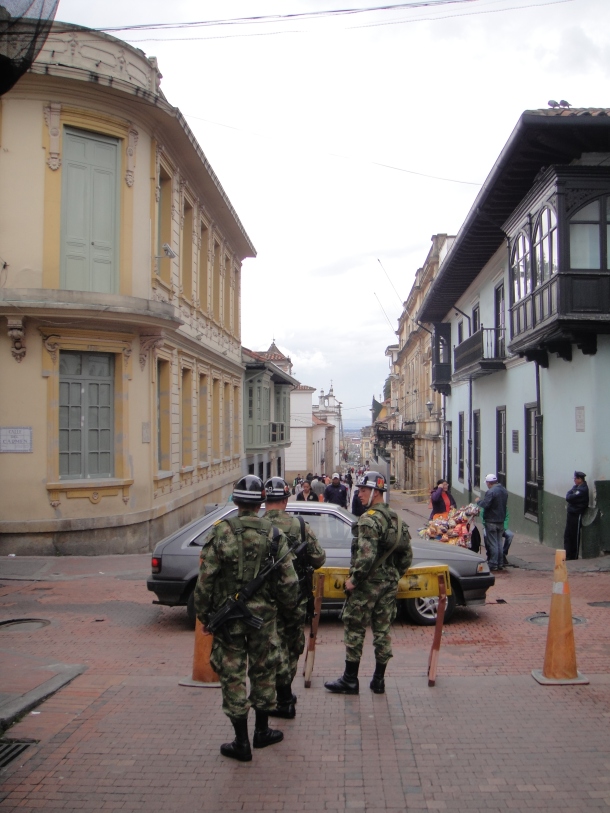 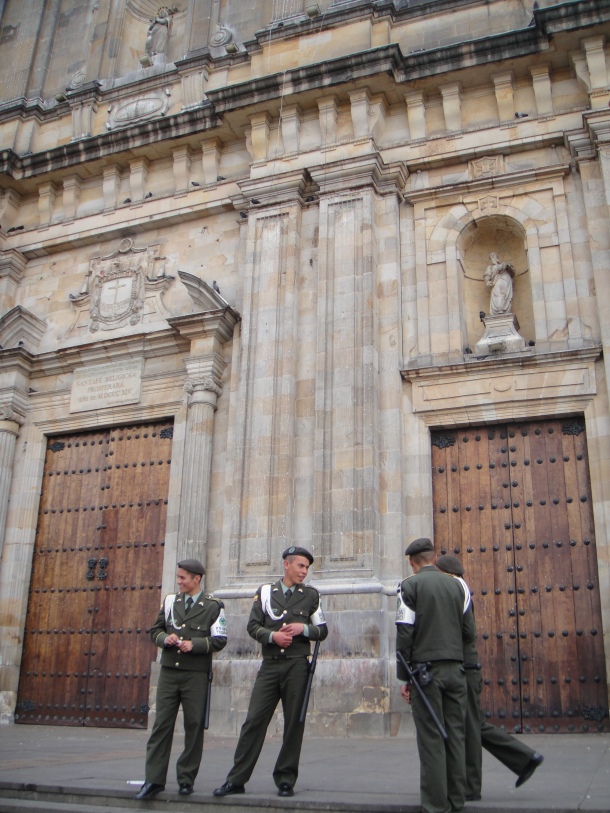 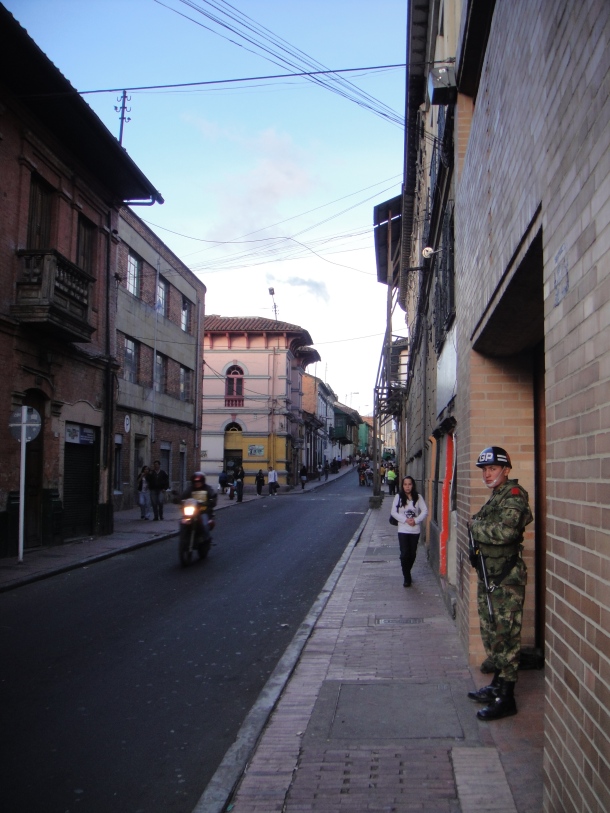 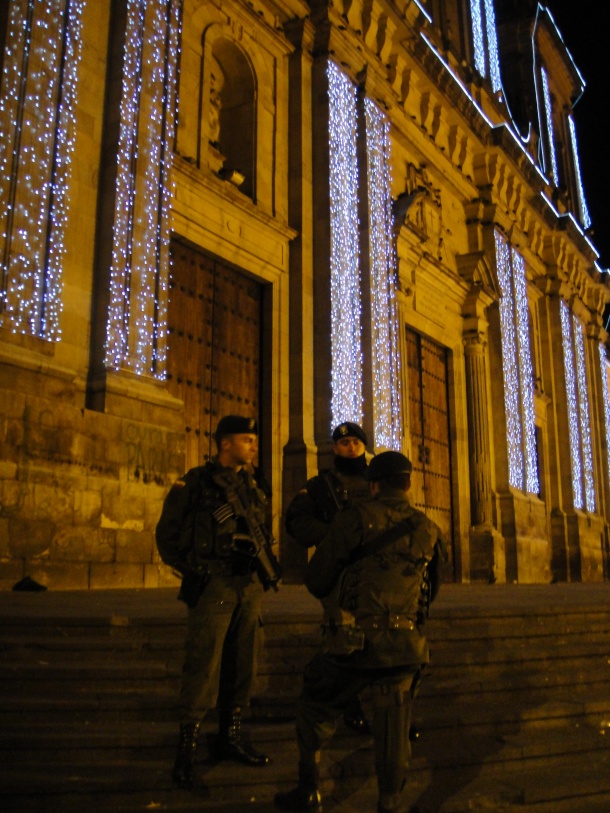 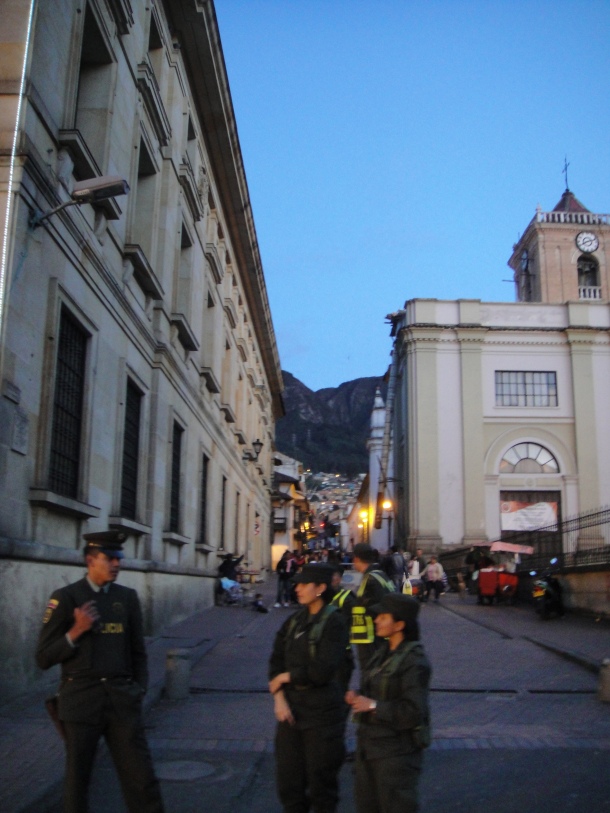 You soon realize that this is probably the last city in the world you’ll get mugged in – at least outside the barrios – and the heavy military presence soon blends in with the background: 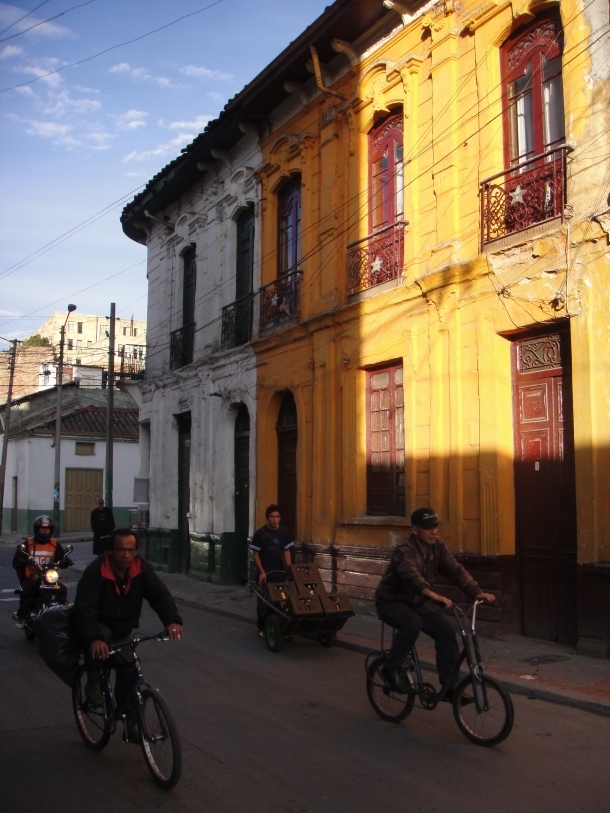 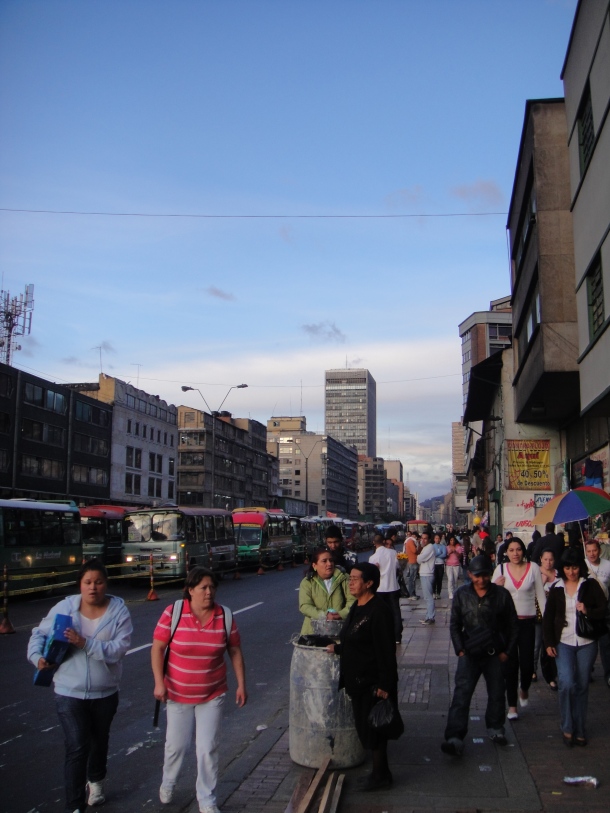 I wasn’t sure what was being sold here, but I was ready to buy whatever was on offer: 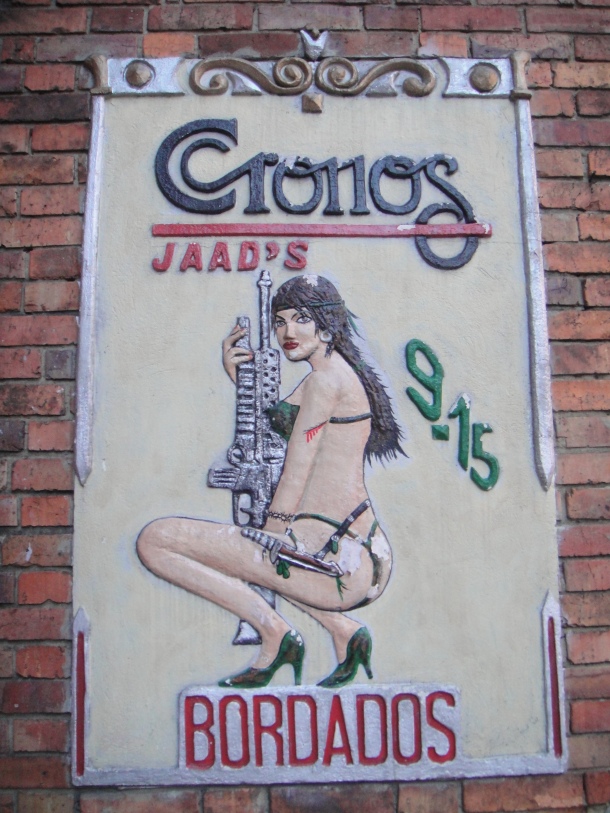 Perhaps because of the heavy security throughout the city, the security seemed relatively light at the Presidential Palace (below). I was surprised that I could get this close and take pictures. I mean Colombia is still in the midst of a civil war – it isn’t Norway: 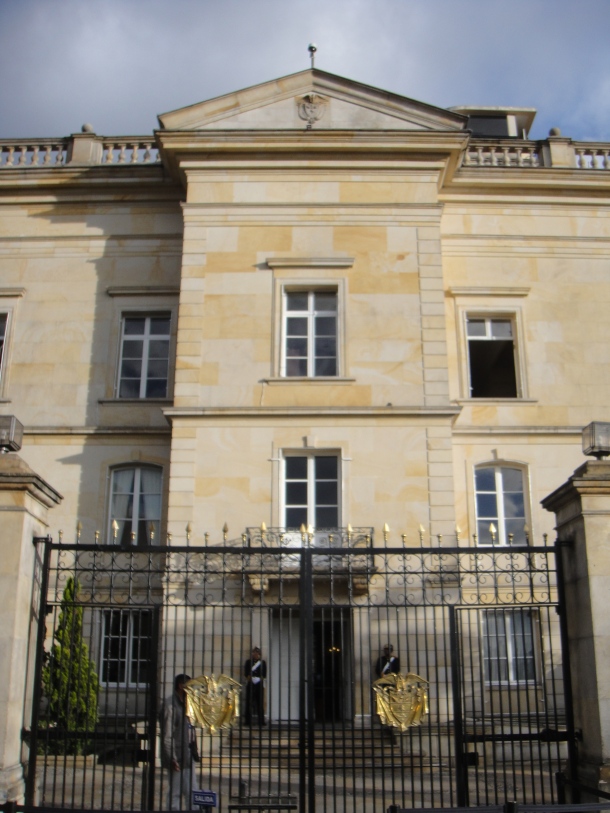 Nevertheless, the primary external security was provided by this soldier manning a roadblock: 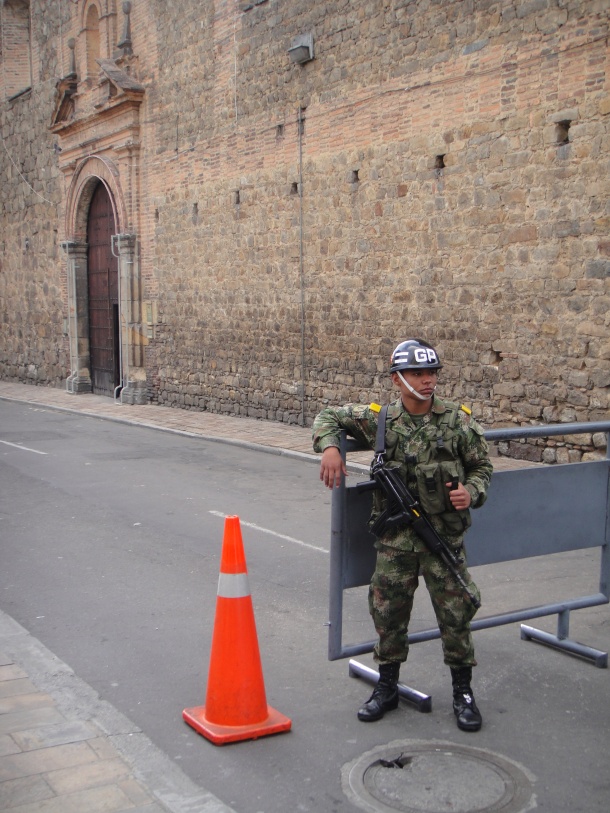 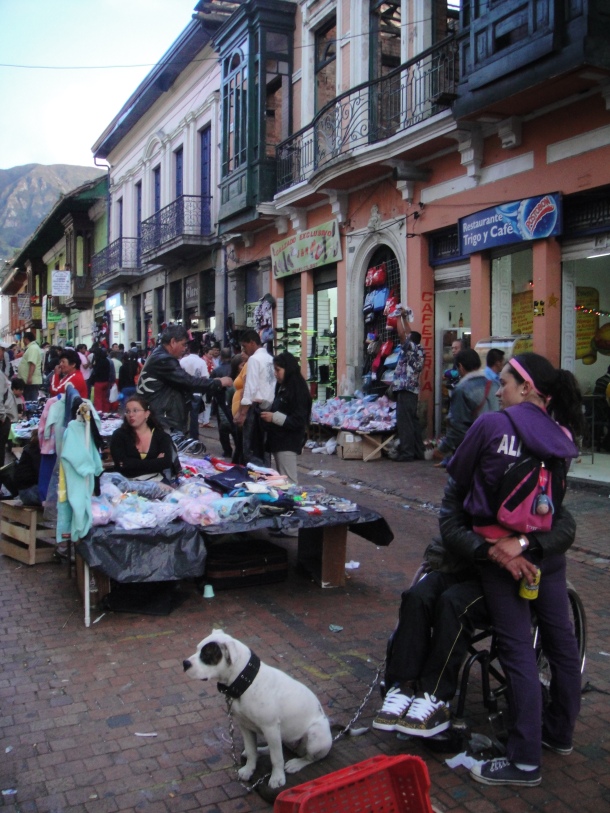 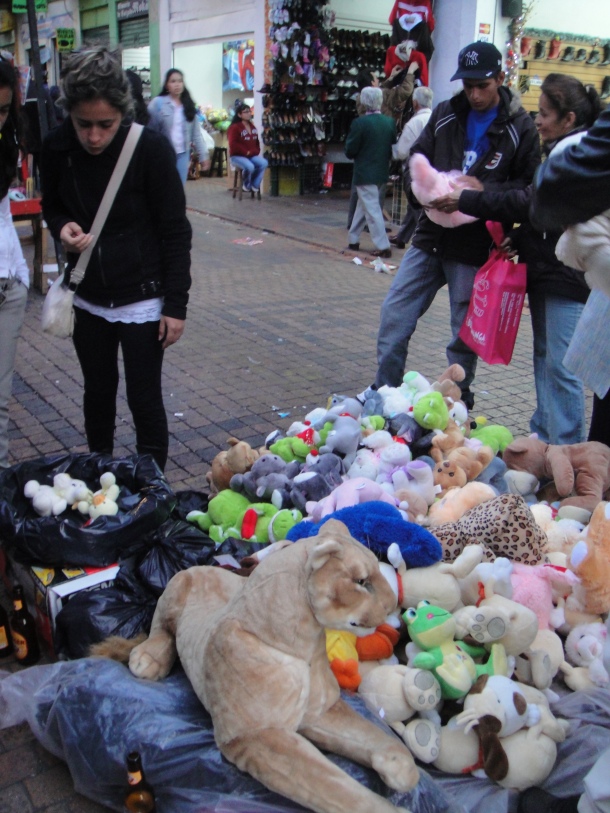 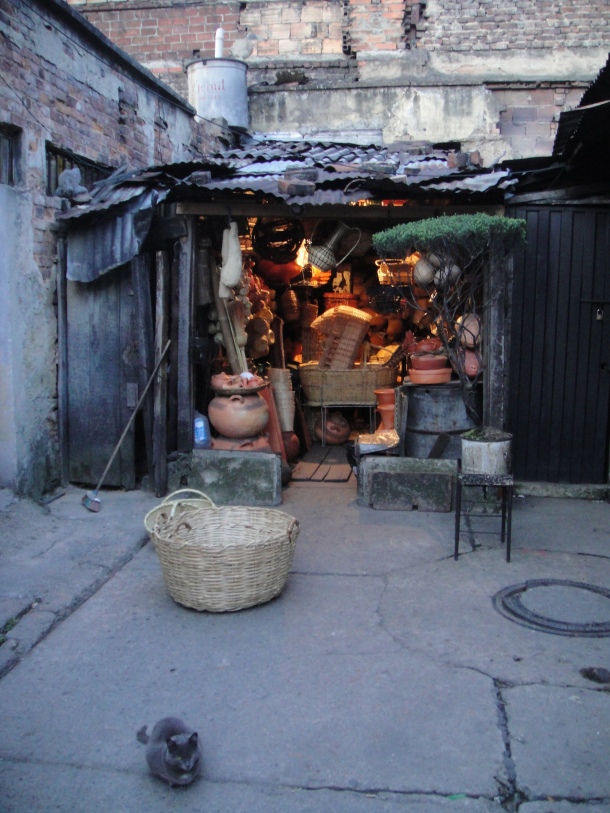 Plaza Bolivar lit up for Christmas: 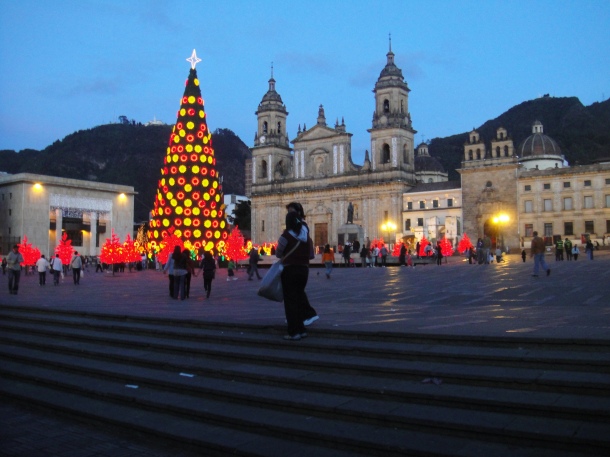 It also left the building reduced to rubble as the guerrillas lost control of a fire they set while burning various criminal records.

This is the original Palace of Justice building going up in flames: 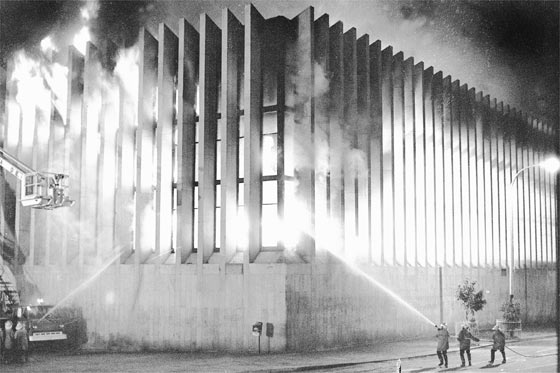 And this is the new Palace of Justice building: 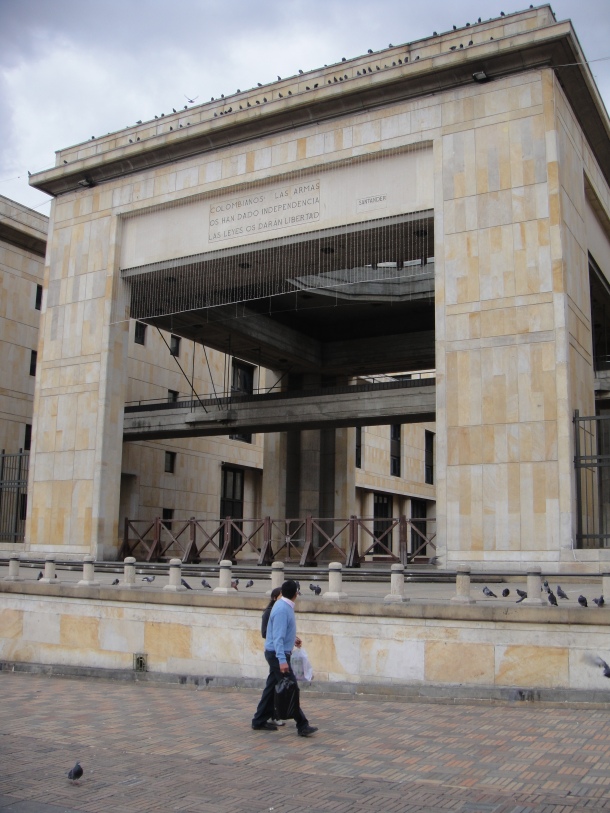 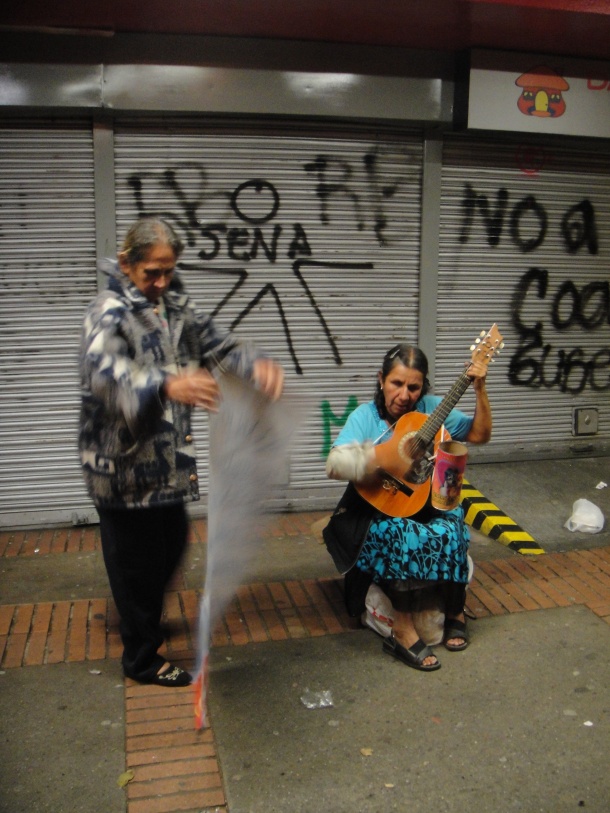 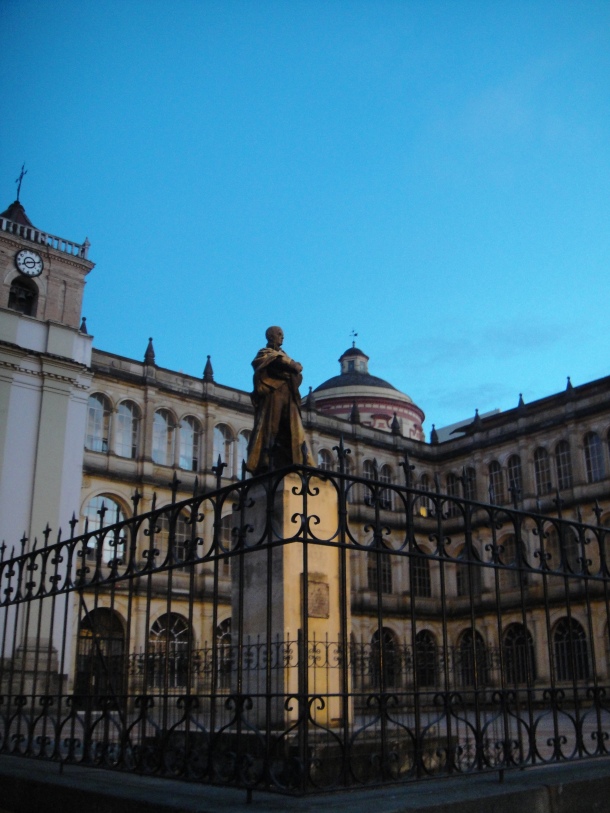 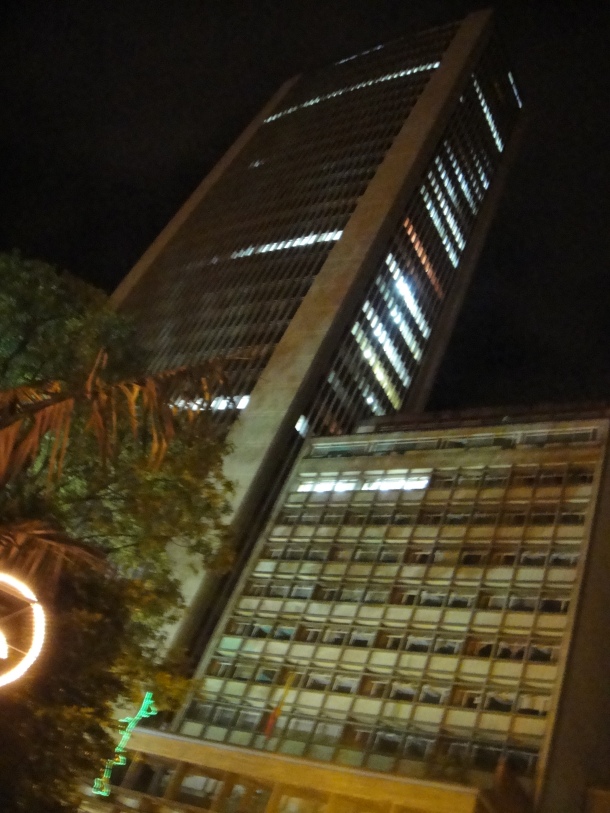 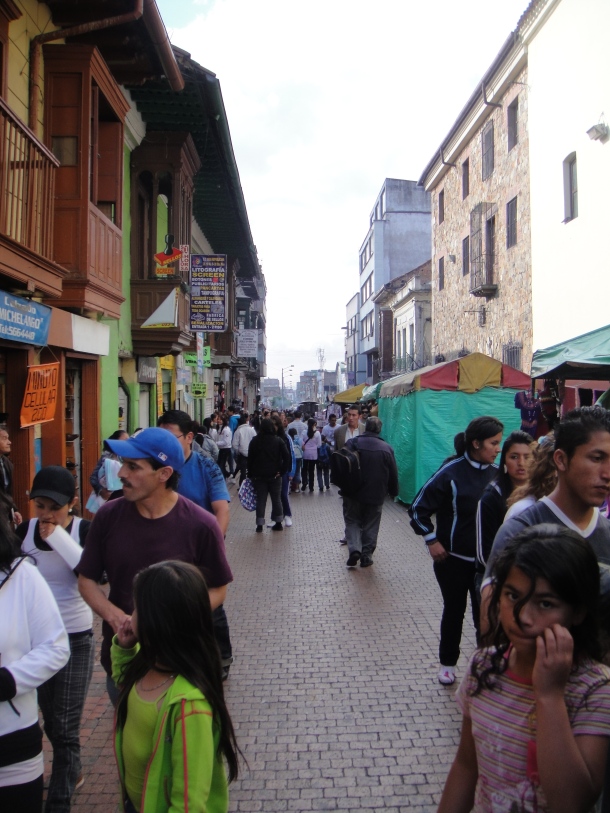 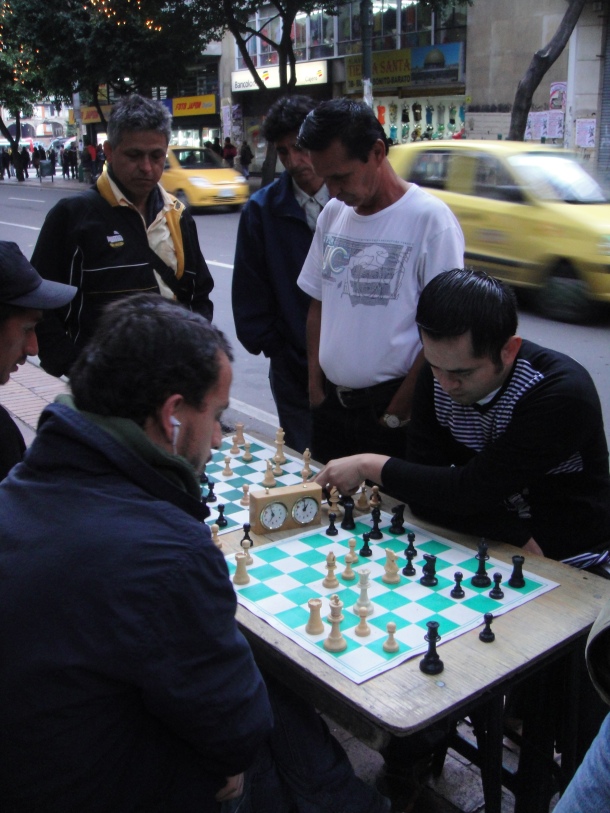 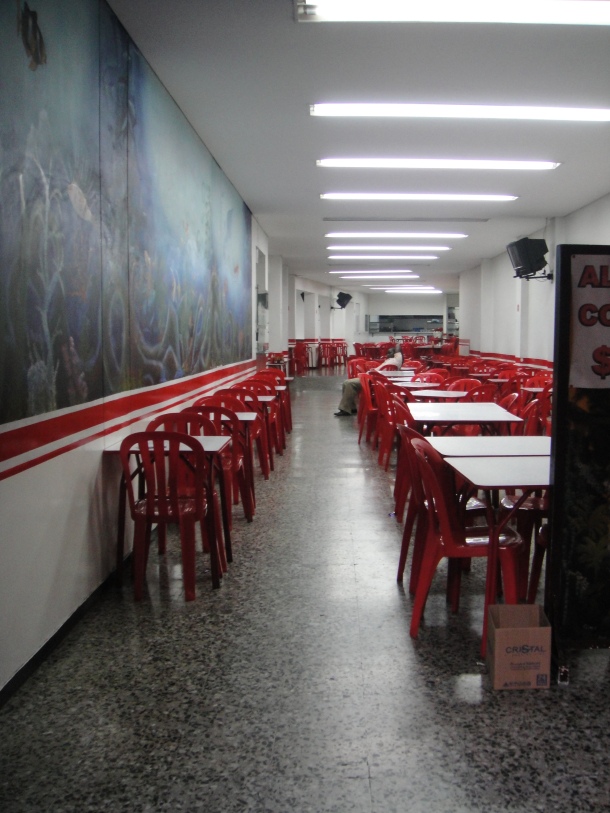 One day we decided to take the cable car to the top of the mountain of Monserrate.

While walking to the cable car platform, we noticed a guy that had set up a target one could shoot at with an air rifle for a trifling charge. Some soldiers were standing around watching how people scored. Thinking I was another douchebag gringo, they were impressed when I proceeded to nail the bullseye on the target every time.

However, they were even more impressed when Eleonora stepped up and put in a solid performance as well:

On the top of Monserrate: 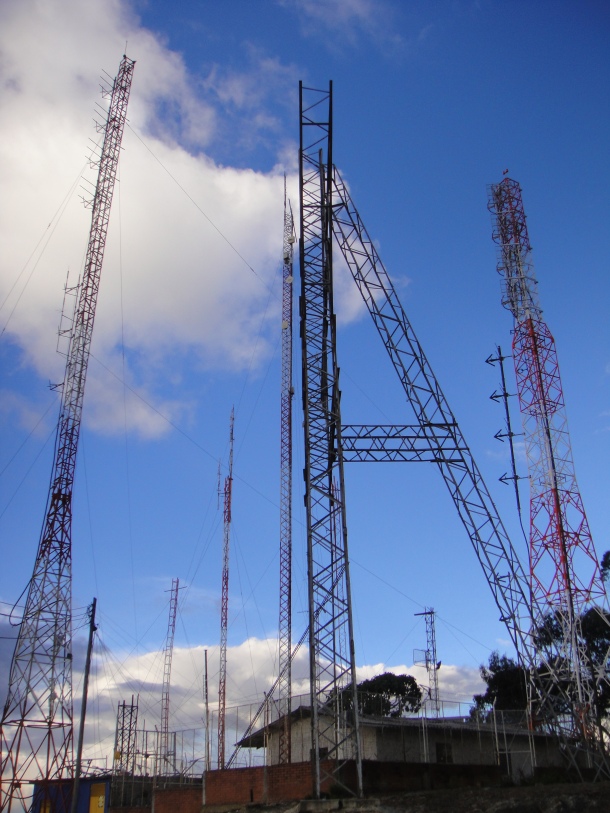 The view of Bogota from Monserrate: 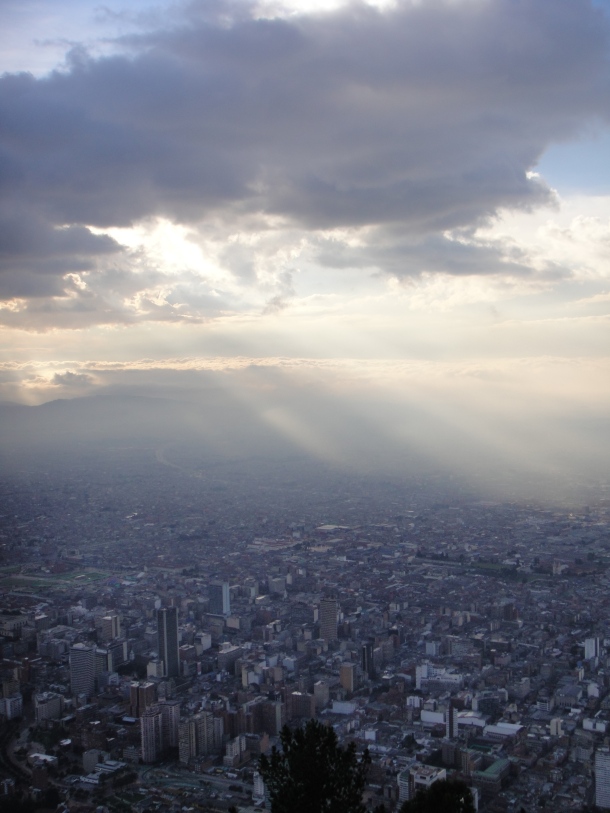 Another day, we walked down to the Mirador Torre Colpatria: 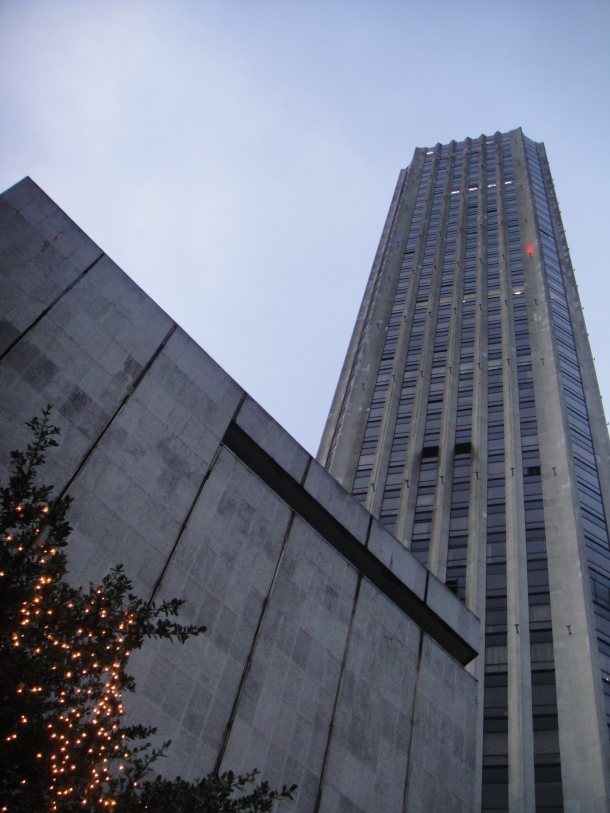 It was built in 1979 and is the tallest building in Colombia. And on weekends and holidays, one can take the long elevator trip to the top for the views.

A view out over Bogota with the city’s bullfighting ring in the foreground: 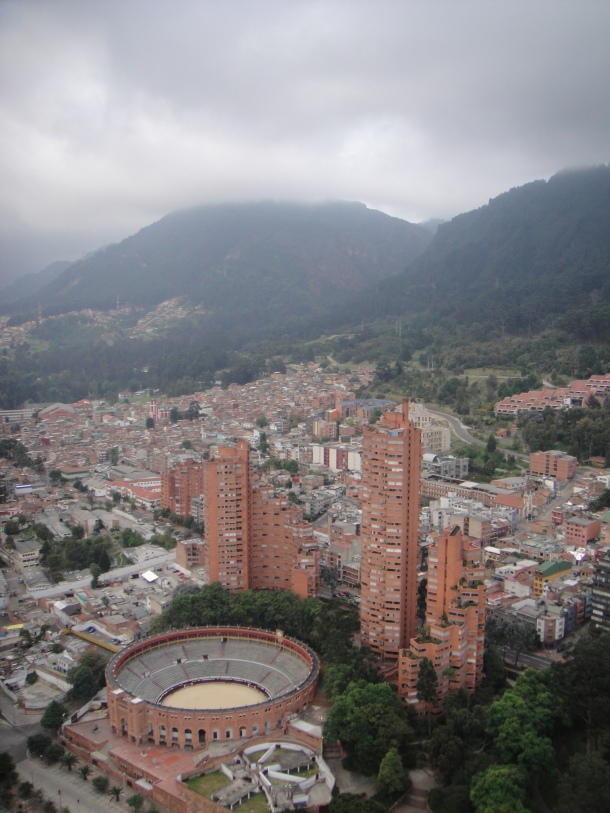 A contemporary history of cocaine in Colombia

The cocaine industry really started to boom in the early 1980s, when the Medellin cartel, led by former car thief Pablo Escobar, became the principal organized narcotics trafficker. Its bosses eventually founded their own political party, established two newspapers and financed massive public works projects and public housing projects. At one point, Escobar even stirred up secessionist sentiments for the Medellin region. By 1983 Escobar’s personal wealth was estimated to be over US$20 billion, making him one of the world’s richest people according to Forbes magazine.

When the government launched a fresh campaign against the drug trade, cartel bosses disappeared from public life and even proposed a ‘peace treaty’ to President Belisario Betancur. In return for immunity from prosecution and extradition, they offered to invest their capital in national development programs and to pay off Colombia’s entire national debt. The government declined this offer, and the violence escalated.

The cartel-government conflict heated up in August 1989, when Liberal presidential candidate Luis Carlos Galan was gunned down on orders from the drug lords. The government’s response was to confiscate nearly 1000 cartel-owned properties and sign a new extradition treaty with the US, which led to a cartel-led campaign of violence resulting in bombed banks, homes, newspaper offices and in November 1989, an Avianca flight from Bogota to Cali, which killed all 107 onboard.

After the 1990 election of Liberal Cesar Gaviria as president, things calmed briefly, when extradition laws were sliced and Escobar led a surrender of many cartel bosses. However, Escobar soon departed from his luxurious house arrest and it took an elite, US-backed 1500-man special unit 499 days to track him down, shooting him dead atop a Medellin rooftop in 1993 (there are rumors that it was actually US Delta Force members that gunned Escobar down, but I obviously cannot confirm this).

Amid the violence, the drug trade never slowed. New cartels have learned to avoid the limelight and by the mid-1990s, guerrillas and paramilitaries started chipping in to help Colombia keep pace with the world’s rising demand.

As a result of crackdowns under the US-sponsored Plan Colombia, new harder-to-track cartelitos (smaller organized crime groups) have replaced the extinguished mega cartels (capped with the 2008 extradition to the US of Medellin narco king Don Berna. Many of the cartelitos are linked to FARC, who tax coca farmers (earning FARC hundreds of millions of dollars a year). Other cartelitos are linked to the paramilitary groups, who sometimes benefit from government money.

As a result, Colombia still supplies 90% of the USA’s cocaine – often getting there overland via Mexican cartels.

Unfortunately, between 50,000 and 300,000 hectares of pristine Colombian rainforest are cleared every year to grow coca plants for all of this cocaine. Other illegal cash crops include marijuana and opium poppies. And cocaine processors certainly are not particularly concerned about following environmental best practices or limiting their ecological footprint on the rainforest. Processing coca plants into cocaine is a toxic job, requiring chemicals such as kerosene, sulfuric acid, acetone and carbide. These toxins are simply dumped on the ground or into delicate streams and rivers. In addition, armed guerrillas and drug runners operating in these forest areas have little respect for their impact on local wildlife.

The guerrillas and paramilitaries

As communism collapsed around the globe, the political landscape for the guerrillas shifted increasingly to drugs and kidnapping (kidnapping alone, by one account, brought FARC some US$200 million annually), and paramilitary groups were given license to be involved with drug cartels as long as they kept after the guerrillas.

In recent months, FARC has made a military comeback, ambushing troops and kidnapping and killing a provincial governor (that happened while we were in Colombia).

“The FARC seem to be bouncing back,” Leon Valencia, the director of the Nuevo Arco Iris (New Rainbow) thinktank, said recently.

A government scheme in 2005 demobilized 32,000 paramilitary members and many leaders were extradited to the US. However, many lower-ranking “paras” who failed to find jobs or promised state assistance have returned to what they know best – trafficking drugs.

The city of Medellin, once the showcase of Colombia’s counter-narcotics fight, illustrates the intractability of the problem. A steep fall in violence paved the way for an apparent urban renaissance, but murder rates rose again last year as drug gangs battled for control.

Prominent local figures, with government backing, are now trying to negotiate a truce. That has raised suspicion of a return to the era of discreet pacts, when officials gave cartels free rein to traffic cocaine in return for social peace.

The remote regions of Colombia, particularly the mountains and deep jungle are presently controlled by guerrillas or paramilitaries – parts of Choco, Narino, Putumayo and the jungle regions east of the Andes (except for Los Llanos and the area around Leticia) as well as the southern regions of Los Nevados National Park.

Caught in the crossfire between paramilitaries and guerrilla forces, and sometimes outright targets, about 3 million people have been displaced since the 1980s, making Colombia home to more displaced persons than any country except Sudan.

About 860 additional people become displaced daily, forced out of their homes at gunpoint – usually stolen for the land, livestock or its location on drug transport routes – sometimes not until a loved one is murdered. Most of the dispossessed are left to fend for themselves, living in tarp-covered huts outside the main cities. The lucky individuals who are able to obtain new land frequently find it in areas with no infrastructure, schools or hospitals. Predictably, displaced children often fall into the world of drugs and crime.

With “victory” in the so-called drug war ever more elusive, it would seem the argument for decriminalization is stronger than ever. It is an experiment no government has yet dared to try.

7 thoughts on “Pictures and Scenes of Bogota, Colombia”