Today I walked past the site of the Yvonne Fletcher incident and thought I’d share some pictures of where this event took place, along with a little commentary, with my dear readers.

I’ll very briefly recap below, but for a thorough account of the event Wikipedia does as good a job as any here.

In 1984 a demonstration was taking place at the Libyan embassy in London (called the Libyan People’s Bureau by the Libyan government). The location of the Libyan embassy at that time was 5 St James’s Square. As is routinely done in such matters, a detachment of thirty London police officers was sent to St James’s Square to monitor the demonstration by Libyan dissidents opposed to the rule of Colonel Gaddafi. One of those police officers was a woman named Yvonne Fletcher.

Suddenly, and without warning, a diplomat from the embassy leaned out of a window and sprayed gunfire into the crowd below with a Sterling submachine gun. The gunfire struck a number of the protesters and fatally wounded Yvonne Fletcher whose fiance was among the other officers on the scene.

The original ITN report regarding Yvonne Fletcher’s murder with extensive footage of the area, the demonstrators and the shooting itself can be seen here.

The incident created an uncomfortable situation for the British government. The police and many in government were furious and surrounded the embassy with well-armed police units (and even summoned the SAS to the scene). But what about diplomatic immunity? After a standoff lasting eleven days, the British government stood down, allowing the embassy staff to depart the building and then expelling them from the country.  Britain then broke off diplomatic relations with Libya.

This decision by Britain was prompted, in part, by Libyan soldiers surrounding Britain’s embassy in Tripoli in response to Britain’s surrounding of Libya’s embassy in London.  However, Britain also, appropriately, feared an escalating tit-for-tat confrontation with Libya that would spread beyond just their embassy staff to British government employees and civilians around the world.  As difficult as it must have been, I believe they made the right decision.

This is 5 St James Park as it looks today: 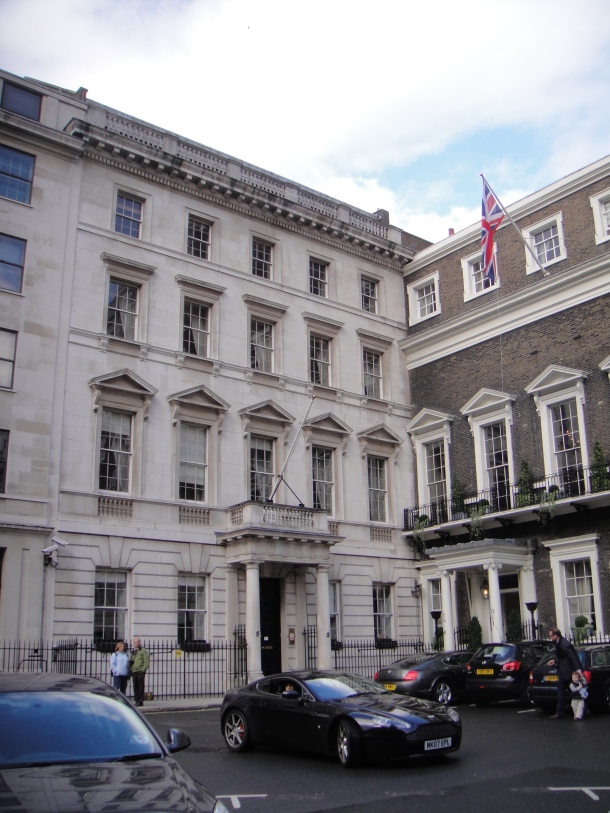 The gunman fired from the second window on the left (the one next to the balcony):

Now, this building pictured below, just to the right of the Libyan embassy, deserves a mention as well.  This is 3 St James’s Square.  In 1984, the CIA and MI6 were allegedly camped out on the top floor, listening in on all of the radio traffic flowing in and out of the embassy.

Conspiracists float the idea that these agencies intercepted a radio communication from Tripoli ordering the firing into the crowd.  Forewarned, and given time to prepare, an agent of either the CIA or MI6 actually fired the fatal shot into Yvonne Fletcher.  The physical evidence for this idea is derived from the 60° angle of entry of the bullet that killed Ms. Fletcher.  Some highly regarded ballistics experts assert that it would have been impossible for the fatal shot supposedly fired from the balcony of the embassy to have achieved this angle – an angle that would have been achievable from the top floor of 3 St James’s Square.

The motive presented by the conspiracists?  America was eager to bomb Libya, but wanted to get a reluctant Britain on board with the plan as well.  Murdering a British citizen in a high-profile manner would go a long way toward swinging British public opinion against Libya.  And indeed, Yvonne Fletcher’s murder was supposedly a large factor in Prime Minister Margaret Thatcher’s decision to authorize the launch of the U.S. bombing raid on Libya in 1986 from American bases in Britain.  And when the United States did bomb Libya, there was barely a murmur of protest from the British public.

Whether one believes the conspiracists or not, it was a significant moment in history and it is interesting to see where it happened.

A memorial to Yvonne Fletcher was constructed and this is how it appears today:

Today Colonel Gaddafi says he has no idea who fired the gun.  And there exists no enthusiasm in Britain to pursue the matter.  After all, Libya has OIL…  So, why dredge up past unpleasantness when there is money to be made?

3 thoughts on “The Yvonne Fletcher Incident”